Tait: Three storylines ahead of Bombers-Riders 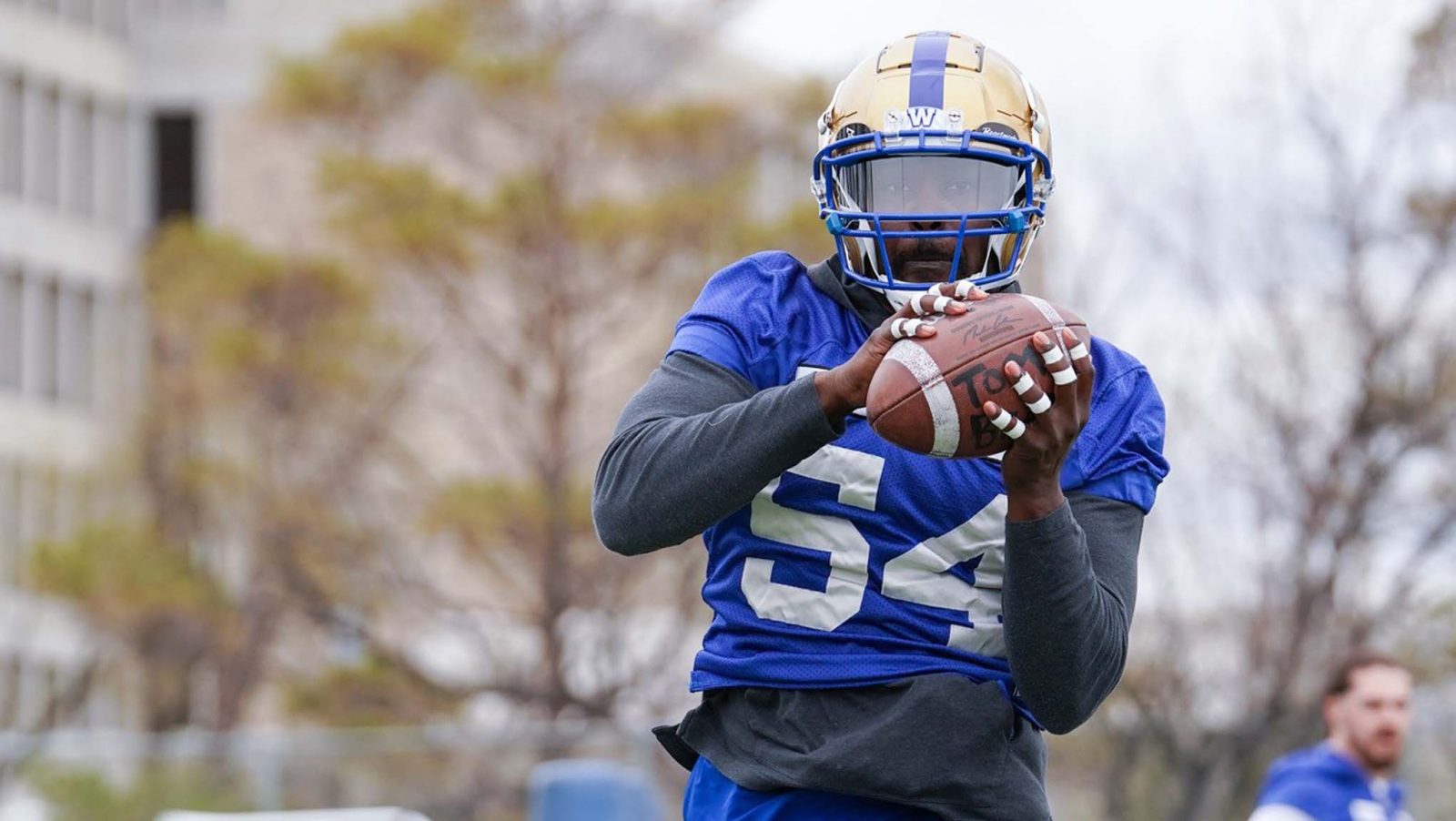 Tait: Three storylines ahead of Bombers-Riders

Few get to call their career shots in professional football. One day the door closes – maybe it slams shut suddenly – the phone goes silent and the opportunities wither away.

Malcolm Thompson has been there before. A few times, actually, as he suffered through two torn ACL injuries during his college days, didn’t hear his name called on CFL Draft day as a result and still scratched and clawed for shots with the Calgary Stampeders and Hamilton Tiger-Cats.

Maybe that explains in part why the 26-year-old safety flew around for the Winnipeg Blue Bombers in last Friday’s pre-season loss to the Edmonton Elks like a man fighting not just for a roster spot, but for his very future in the game.

Thompson, a Wilfrid Laurier product, finished the night with three tackles – including a violent shot on former Blue Bomber Charles Nelson that forced a fumble which was recovered by Winnipeg, and timed a blitz perfectly to nail Christian Saulsberry for a four-yard loss.

In short, it looked like he was running downhill into the Elks in his two quarters of work.

“With me being with a few teams already in so little time, I had to put it all out there,” Thompson told Bluebombers.com “I have a few things to clean up, but I was happy with my game and the physical part of it.

“(Head coach Mike O’Shea) even told us at the half that it was time to pick up the physicality. I’ve always been a physical player, so any time I have an opportunity to make a hit that’s something I’m going to put my whole body into.”

Thompson grinned then – and it was a grin that clearly comes from the satisfaction of seeing the results from putting in countless hours at fine-tuning his craft and working on his rehab over the last few years. Enduring all that can harden a man and mature him at the same time. It also gives him a deeper appreciation for the opportunity, like when the Blue Bombers called in early January offering him a contract.

“When they called me I was ecstatic,” Thompson said. “When I got here I just wanted to put everything I could on tape and give them what they asked for and be a guy that even after two ACL injuries can play football and make plays.

“Tearing my ACL a first time and then a second time…I put so much into coming back from that I wasn’t going to let it stop my grind and what I was ultimately working for.

“I’ve just kept trucking. The injuries and the recovery made me stronger. Fighting through adversity is always what I’ve been doing and what I’ve been taught. It’s just part of me.”

Using Thompson’s own tale as a backdrop, here are the three storylines for the Blue Bombers final preseason game Tuesday night in Regina against the Saskatchewan Roughriders.

Thompson’s story isn’t unique in the Blue Bombers locker room – overcoming two ACL injuries might be, but not his dogged pursuit of his football dream.

That’s what makes Tuesday’s game so significant for so many, especially the newcomers. It’s step up or step out time, as the club will have to whittle its roster down after the game into the lineup that will take the field against the Ottawa REDBLACKS at IG Field on June 10.

Another example – linebacker Malik Clements, the former Elks’ player who put aside his studies in dentistry to chase the chance to play football for a living.

“This is a game that I love,” said Clements. “I’ve just had a passion for it since I was yay high. I didn’t want to give up on my dream and the dream for me is to play at the highest level I can. I’ve kept pushing for this opportunity, and when it did come up I was ready.

“The dentistry career… I was just talking to my orthodontist, who is like a mentor for me, and even he said you can go back to school any time. While I’m still young I want to take advantage of my first love, and that’s football.”

Clements, like Thompson, jumped out for his work last Friday as he finished with four tackles, two more on special teams and a quarterback sack.

“I’m my harshest critic,” said Clements. “I was a little rusty. New system, a shorter camp…I have a few things to clean up, but I’m OK with what I did. I like setting the tone out there. I pride myself in being a high-motor guy and my wind isn’t where it needs to be. But it’s coming. Maybe I’m being a bit hard on myself, but I want to do whatever I can to make this team and then help it.” 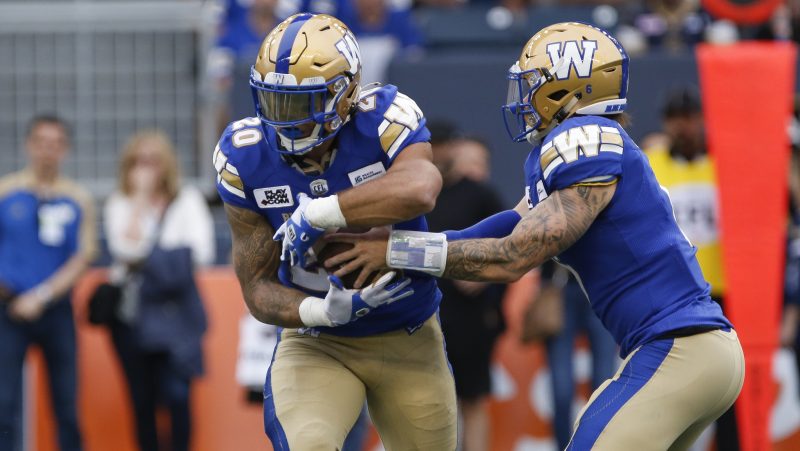 The Bombers’ run game could be a two-man job this season, as Brady Oliviera and Johnny Augustine both put in work in their pre-season debuts this past week (The Canadian Press)

One of the storylines that will likely carry into the opener next week and beyond is how the Blue Bombers fill the hole in the backfield left vacant by the departure of Andrew Harris this winter.

Both Brady Oliveira and Johnny Augustine have already proven to be more than capable. Both want to be the starting tailback. Yet, it’s also possible what we saw last week against the Elks – with Oliveira rushing for 19 yards on three carries and Augustine for 54 yards on six carries – might just be what unfolds during the regular season.

“We have a great backfield,” said Augustine, who along with Oliveira, will not dress for Tuesday’s game in Regina. “Brady’s an awesome player and I have nothing but good things to say about him. At the end of the day, we’re only going to make each other better and help this team.

“I can’t let those other factors get into my head. I can’t let the factor of Andrew previously being here, the No. 1 spot opening, all that kind of stuff…all I can control is what I can control. I just know this off-season I worked extremely hard, which I do every year to come into shape because at the end of the day I want to do whatever I can to help my team win.

“And, yeah, I’m going to be honest – I anticipate and want to be carrying the load a little bit more this year. Whatever that capacity is, whatever that role is I’m hoping that I have that opportunity to be on full display in all the regular-season games this year.” 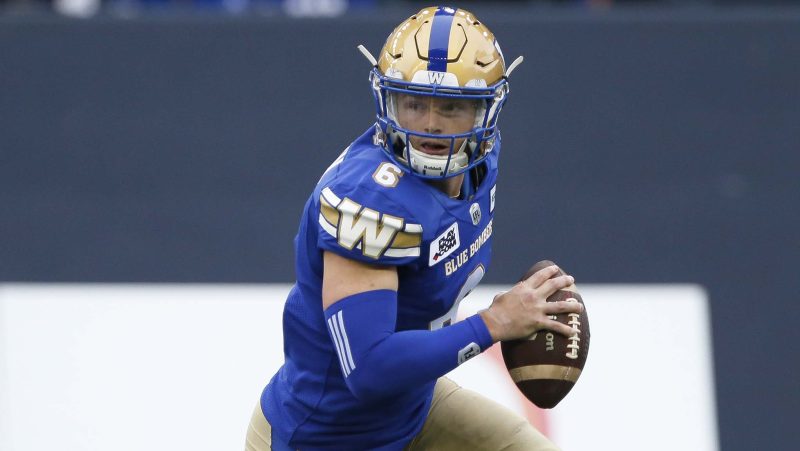 With a short turnaround between the Bombers’ two pre-season games, expect to see coach Mike O’Shea dig in on the evaluation of the depth of his roster, including QB Dru Brown (Photo: The Canadian Press)

The Blue Bombers saw their first pre-season action Friday because their Victoria Day matchup against the Roughriders had been rescheduled during the labour dispute between the league and the players. That rescheduling means the club will now play two games in five nights and the roster for Tuesday, in part, reflects that as several veterans are being held out to be ready for the season opener.

That list also doesn’t include Brandon Alexander and Noah Hallett, both of whom are recovering from off-season surgery.

Let’s go out on a limb here and suggest it’s safe to say all those guys have made the team. Asked how the club’s approach might change from the first pre-season game to the second, head coach Mike O’Shea said:

“Well, we had one day of practice. I don’t know what you can really change. They key is just to give them the simple things again and let the guys continue to play fast and then you can see what they can do.

“It’s hard with four days between and one day practice to change what you’re looking at. You’d like to see them improve, that’s the No. 1 thing, and just make sure they’ve gotten better.”

Tuesday’s game could be the last shot for players trying to lock down a starting job or even a roster spot. And O’Shea offered a straightforward answer when asked how a player can stand out in the final pre-season game.

“Make plays,” he said. “Whatever they’re being asked to do, they have to figure out a way to make a play and not leave the system and not abandon what their job was on that play. Figure out a way to stand out is really just jumping out there on the field and making plays.”