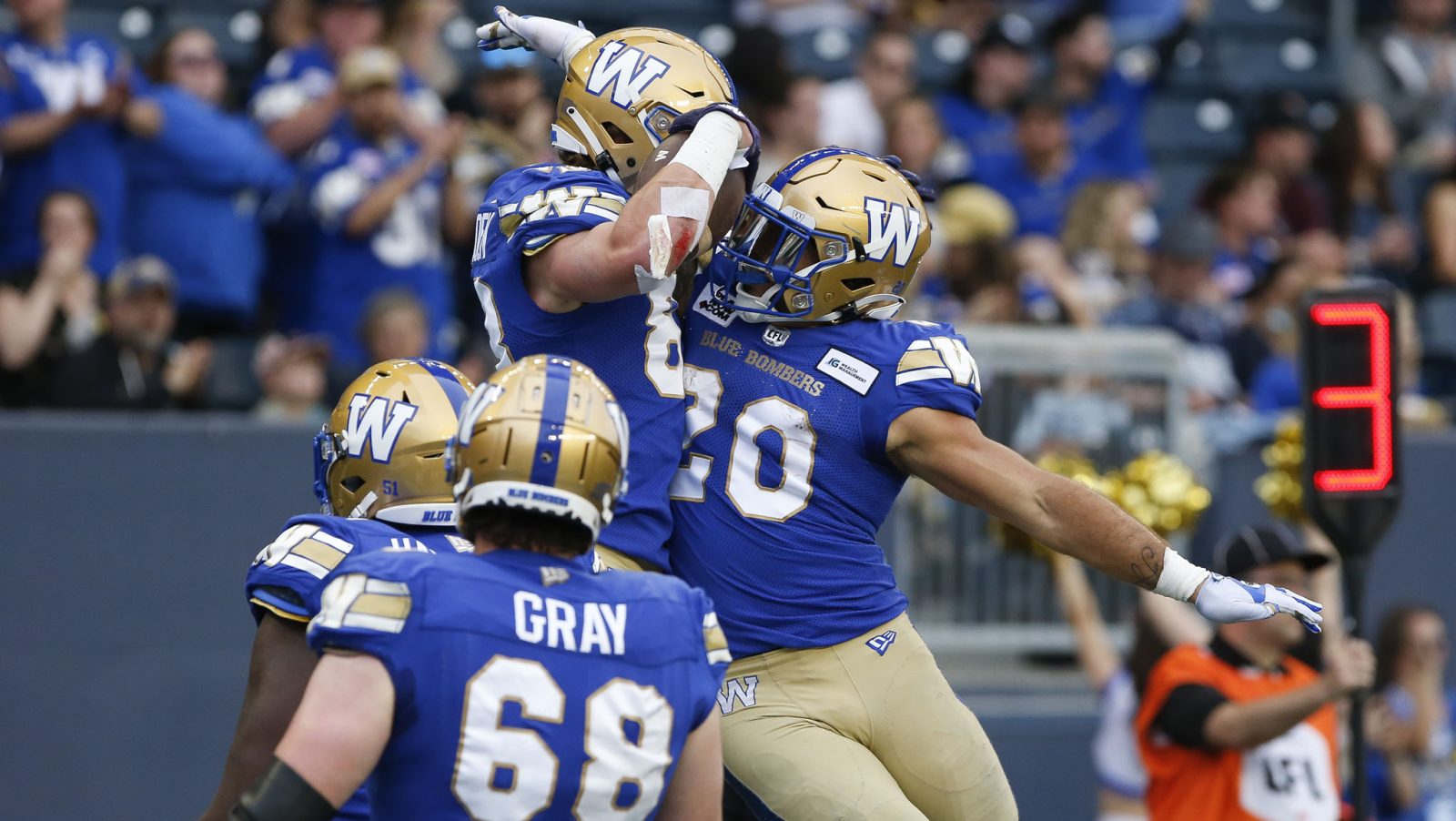 TORONTO — After a full training camp with all of its pre-season games, we’re gearing up to roll into a new CFL season in early June. After two very difficult years of a pandemic, it feels great to be back on the usual schedule, with a feeling of normalcy back around a game that’s been disrupted for too long.

As we inch closer to Thursday night’s season-opener between the Calgary Stampeders and the Montreal Alouettes, we find one constant through the past two years’ worth of turbulence and that’s the defending Grey Cup champions.

It’s far from a spoiler alert to let you know that our first power ranking of the 2022 season starts with the team that essentially held that spot all of last year, the Winnipeg Blue Bombers. As they take their first steps toward what would be a history-making three-peat, they do so knowing that the target on their backs has only grown bigger. There will be no free spots on the bingo card for the Bombers this season, but they know that.

While the other eight teams in the league take aim at the two-time defending champs, lets see how they all stack up while everyone sits at 0-0.

Does anyone else just scroll down the page and expect to see the Bombers in this spot? It’s a fair reflection on just how good this team has been, first climbing to the top of the CFL mountain in 2019, then showing such dominance last year in the defence of their Grey Cup win. There are changes in Winnipeg this year — Andrew Harris‘ move to the Argos being the primary one — but provided the Bombers can get production out of Brady Oliveira and Johnny Augustine, the rest of the core that we’ve grown to know/love/fear depending on your allegiances should carry on, dominating business as usual.

The Ticats move into the regular-season having made their choice at quarterback, with Dane Evans the clear No. 1 for the first time in his career. The obvious challenge for the offence will be week-to-week consistency. Injuries to both Evans and Jeremiah Masoli last year threw a wrench in that, but when Evans was healthy in 2019, we saw what he was capable of. The loss of Ja’Gared Davis on the d-line has been mitigated by the off-season signing of Micah Johnson and, like Winnipeg — these teams always seem to end up being tied to one another — the core of the team returns, looking to take that final step to a Grey Cup victory.

The Argos took a team that was on the cusp of getting to the Grey Cup game in 2021 and have looked to experienced vets to help get them over the hump. Andrew Harris knows a thing or three about winning Grey Cups and Brandon Banks has plenty of motivation this year to show that he can still play at a high level and help his team win. The addition of Ja’Gared Davis will bolster a defensive line that needed a little more punch last year. The continuity within the organization right now should only help the Argos as they look to move their way up to the top of a competitive East Division.

With the Riders hosting the Grey Cup this year and the team already on the doorstep of getting to the big game the last two seasons with Cody Fajardo at QB, there’s a perfect storm of expectations brewing in Saskatchewan. Very high on that list will be seeing Fajardo lead an explosive offence out onto the field, starting this week against Hamilton. Some players rise to the occasion in high-pressure situations. We’ll soon start to see how this Riders team responds to being under the microscope for the next few months.

After something of a down year in 2021, it’s hard to know what to expect from the Stamps this season. Bo Levi Mitchell put up less than stellar numbers in his lone pre-season game, making 3-10 passes for 37 yards with two interceptions, but the Stamps won handedly against a Lions roster that’s a shadow of what the team will actually field this week when they host Edmonton. Mitchell sat on Friday in Edmonton, but the Stamps dominated the Elks, coming away with a 37-7 win. Mitchell is a vet and a heavily decorated one in the CFL at that, so we’re thinking he’ll be sharp and ready when the curtain goes up for him on Thursday.

In our off-season power rankings, we said that this would be a must-watch team come June and that fully holds true now. The talent is no doubt there in Ottawa and we saw glimpses of it in the team’s pre-season action. Now we get to see head coach Paul LaPolice try to pull it all together. A good start will be more important in the East this year than it has been in a number of years. The REDBLACKS have talent on every side of the ball and it’ll be fun to see how they gel in the coming weeks in a very competitive East Division.

Pre-season lessons are always sprinkled with grains of salt and asterisks, but we have one solid takeaway from the Alouettes thus far: This team could be surrounded by quarterbacking noise throughout the season. The noise got cranked up on Friday night in the TSN studio, when head coach Khari Jones waivered ever so slightly on if Vernon Adams Jr. would be his starting quarterback for Thursday night’s game in Calgary. However loud the noise gets outside the locker room, it’ll be on Jones, Adams and Trevor Harris to keep it silent and consistent inside of it and on the field. This will be an interesting thing to see play out, starting this week.

The Lions have spent the last few months under the scrutiny of many that follow the league after they immediately went with Nathan Rourke as their starter when Michael Reilly retired. In free agency, they added Michael O’Connor as his backup and eyebrows across the country went upward. Even if you put their Canadian status aside (a very cool storyline, by the way), the team is leaning on two very inexperienced QBs to take them into the season. You should never buy what teams sell in the pre-season, good or bad, but both pivots looked sharp in their pre-season win on Friday over Saskatchewan. Rourke will have to show it’s for real, starting this week. If it is, the Lions have something very interesting cooking.

The question that loomed over the Elks camp when it opened is somehow still there, four weeks later. Who is their starting quarterback? Chris Jones likely knows, but when you’re asking the question at this point in the season, a team can have a long road in front of it. Nick Arbuckle played well in his pre-season game, but an injury kept him out of showing what he could do for the second game. Will that linger into Week 1? Until we have a good sense of who will be under centre for this team, that road in front of it remains long.