Stanback driven by the memory of his parents

Stanback driven by the memory of his parents

William Stanback had a stellar year for the Montreal Alouettes in 2021. He finished the season as the top running back in the league and led almost every statistical rushing category.

His 1,176 rushing yards were the most of any back, as was his average of 6.1 yards per carry. Stanback also led the league in rushes of 10 yards or more (30) and rushes of 20 yards or more (seven). That play made him the East Division’s nominee for the 2021 Most Outstanding Player award.

When reminiscing on the past season the one word that came to mind for Stanback was, dominant.

“I feel like dominant is just a word that really just lets everyone know how I am,” Stanback said during an interview with Donnovan Bennett.

However, for the fourth-year running back, being dominant isn’t simply just an intimidating buzzword. For Stanback the word dominant holds a much more symbolic meaning, one that is rooted in family.

“That’s just a word that my father used to tell me to be, when I go out there, whether it’s on or off the field,” said Stanback. “That’s just something that I’ve taken to pride, especially when my parents passed. This season I just really wanted to go in there full throttle and just make sure that I leave a stamp.”

As dominant as Stanback was throughout the 2021 season, there was a point in his life where he felt he might never play football again.

RELATED
» Where to Watch: 2022 CFL broadcast schedule
» Buy Tickets: Montreal at Calgary
» CFL GameZone: Play CFL games!
» Power Rankings: Kicking things off for Week 1
» Everything you need to know ahead of the 2022 season

After a breakout season in 2019, which saw Stanback rush for 1,048 yards and five touchdowns, he received an invitation to attend training camp with the Las Vegas Raiders.

The day before having to leave for training camp in Nevada, Stanback had to take his father to the hospital.

“My father never told me straight forward that he had cancer,” said Stanback. “I guess he didn’t want me to focus on that, he wanted me to focus on the task at hand, and that was making the team out in Vegas.

“The day I went out to Vegas for training camp, I had to take my dad to the hospital,” said Stanback. “I wasn’t sure if that was going to be the last time I saw him.”

When speaking of his time during training camp with the Raiders, Stanback admits that it was hard to be in camp and focus on playing football knowing his father was in the hospital.

“I just mentally wasn’t there,” said Stanback. “Half of me didn’t want to be there because something is going on at home.”

While Stanback was in camp with the Raiders, both his father William Stanback Sr. and his mother Patricia passed away.

The CFL veteran did return to Las Vegas for training camp, but ultimately didn’t make the roster. Following his release from the team, Stanback felt he was at a place where a return to football might not be possible. 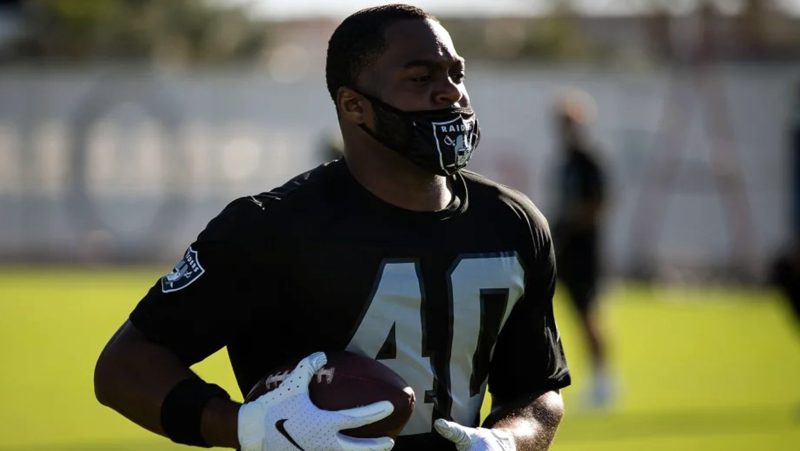 However, with  the thought of his parents in mind, Stanback made the decision to return to Montreal.

“I was mentally in a state where I might not be able to play football anymore,” said Stanback. “I continued to just stay grounded and understand that my parents wanted me to continue to play, I can’t just quit. Me coming back to Montreal, coming back to the CFL, I feel like I had almost a second chance.”

As Stanback prepares to enter his fourth season with the Alouettes with the thought of being dominant on his mind, he acknowledges that he has his father to thank for igniting his passion for football.

“I’ve been playing this sport since I was nine years old, it was my father that got me into it,” said Stanback. “It’s one of the best thing’s he ever could have done for me, ever could have introduced me to.”

When asked what he would tell his parents should he have the opportunity to win an award in the CFL, Stanback said he would tell them, “I’m proud to be a Stanback.”

Stanback and the Alouettes will open the 2022 CFL regular season with their matchup against the Calgary Stampeders. Kickoff is set for 9:00 p.m. ET at McMahon Stadium in Calgary on Thursday night.