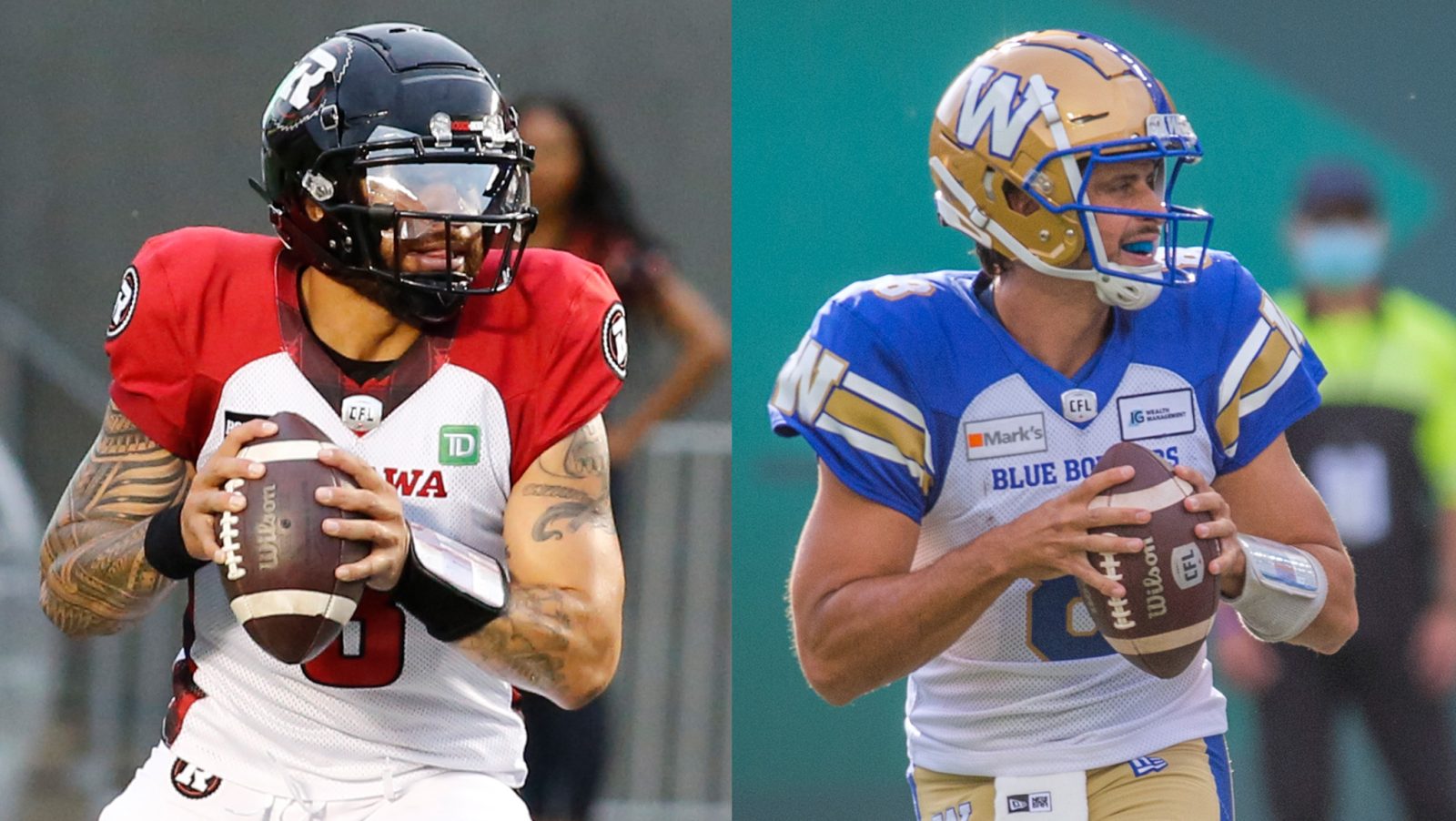 WINNIPEG — It’s been 180 days since the Winnipeg Blue Bombers hoisted the Grey Cup for the second consecutive year.

On Friday, they begin their quest for a three-peat when they welcome the Ottawa REDBLACKS to IG Field.

If they’re able to accomplish the feat in 2022, it will be the first time a team has won three straight Grey Cups since Edmonton’s historic five year winning streak from 1978 to 1982.

If that isn’t enough, the Most Outstanding Offensive Lineman from last season Stanley Bryant is also back for his seventh season in Blue and Gold.

Bighill, Bryant and Collaros were all set to become free agents prior to the start of the new season, but chose to sign extensions with the Bombers before hitting the open market.

Despite losing running back Andrew Harris and wide receivers Kenny Lawler and Darvin Adams to free agency this off-season, Collaros will not be short on options when his team lines up against the REDBLACKS on Friday night.

Greg Ellingson, who came over from Edmonton, caught 47 passes for 687 yards a year ago. If he’s not open, look for Collaros to turn his attention to Rasheed Bailey, Nic Demski or rookie Dalton Schoen against an Ottawa team that allowed 3,812 yards through the air last season.

Points will come at a premium for the REDBLACKS against a Bombers defence that was tops in the league a year ago. The aforementioned Bighill, defensive tackle Casey Sayles and defensive backs, Deatrick Nichols, Winston Rose and Nick Taylor will look make life difficult for REDBLACKS quarterback Jeremiah Masoli.

For Bombers head coach Mike O’Shea, the focus for Week 1 is to make sure his team is prepared for the unpredictability that often accompanies early season games.

“I think there’s always change in any pro sport,” O’Shea said during his press conference after Wednesday’s practice. “There’s a quarterback change there. Teams don’t show everything they have. Some guys don’t play in the pre-season. So you need to rely on your preparation and your understanding of what you’re supposed to do and your game plan.”

Speaking of quarterback change, Masoli begins his first season in the nation’s capital after spending the previous eight with the Hamilton Tiger-Cats.

Masoli is no stranger to the Bombers defence; he was held to 24 completions on 41 attempts for 242 yards, a touchdown and threw two interceptions in a 19-6 Week 1 loss to Winnipeg last season.

It will also his first time facing the Bombers since the 108th Grey Cup, a game which saw Masoli throw for 185 yard and two touchdowns in the Ticats’ overtime loss.

A lot has changed in Ottawa since their last regular season snap. Running back Devonte Williams will draw the majority of the carries Friday as starter William Powell is sidelined with an achilles injury. After an impressive pre-season debut with the REDBLACKS former Hamilton running back, Jackson Bennett will surely see snaps as the No.2 back on the depth chart.

Bennett and Masoli are not the only former Tabbies looking to make an impact with their new team. In the air Masoli will have former Ticat wide receiver, Jaelon Acklin to target on Friday night. Acklin reeled in 50 passes for 678 yards and four touchdowns with Hamilton in 2021.

However, the REDBLACKS offence is not all shades of Black and Gold. After signing with Ottawa in the off-season, former Blue Bombers wide receiver Darvin Adams will be making his return to Winnipeg in Week 1.

Adams put together an electric performance in last year’s Grey Cup, catching five passes for 61 yards, including the game-sealing touchdown for the Bombers in overtime. Masoli will certainly be looking to Adams offensively to help lift the REDBLACKS over his former team.

Patrick Levels and Avery Williams will headline an aggressive Ottawa defensive front. The REDBLACKS will start the season without off-season signee, Kwaku Boateng, after he suffered an injury during training camp.

It’s sure to be a measuring stick game for the REDBLACKS against the defending champs. But it’s an opportunity head coach Paul LaPolice, a former Winnipeg head coach and offensive coordinator, is relishing.

“I’m excited to go play a good football team. ” LaPolice told the Ottawa Sun. “We’ve had a couple of months to game plan for them. Winnipeg is probably one of the loudest places you’ll go. We have to make sure we can handle that. I have a lot of respect for all their coaches. And they have some talented football players — offensively and defensively.”

As the Winnipeg Blue Bombers set their site on a third consecutive Grey Cup, their season will kick off against the Ottawa REDBLACKS on Friday. Kickoff is set for  8:30p.m. ET at IG Field in Winnipeg.

The game can be seen on TSN, RDS, ESPN and can be followed along on CFL.ca’s Game Tracker.