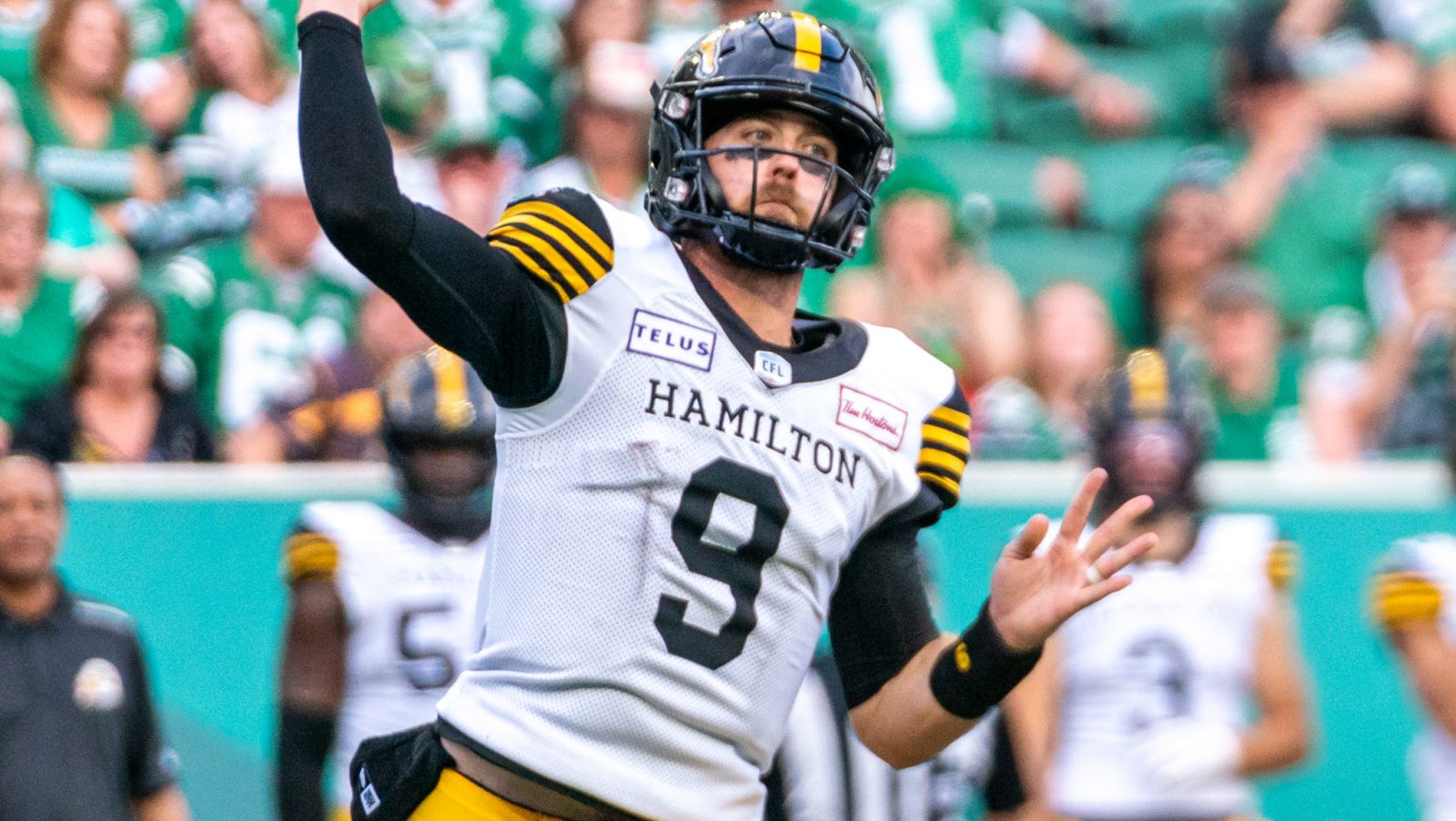 Hello, Nathan Rourke. Way to take on the pressure of being anointed a No. 1 quarterback amidst a healthy dose of observers’ skepticism. Not to mention the added pressure of a nation turning its lonely eyes to you, hoping to finally once again see a star quarterback of home and native brand.

What’d you do this past off-season? Travel to a far off planet in order to return Russ Jackson’s lightsaber to him? Gonna call you Nathan Roar-ke, I think.

Here are the Week 1 takeaways.

HE AIN’T JUST A PRETTY FACE YOU KNOW

BC running back James Butler entertained us with one of the greatest halves of a game in recent memory when he scored two rushing touchdowns and two receiving touchdowns in the first half of the Lions’ walkover win against Edmonton.

It was on the drive after his fourth touchdown where I felt even more impressed by the sophomore tailback. On a second down play from the Edmonton nine-yard line, Butler was not asked for glamour but, instead, grit. As Roar-ke (see, it’s catching on already, right?) dropped back in the pocket, Butler stayed in for pass pro and took on a full-flight, blitzing linebacker, paying a hefty physical price in order to help facilitate a completion on the play. He blew up a blitzer on an edge rush later in the game, too.

James Butler had 17 rushes for 108 yards and 2 touchdowns on the night. And six catches for 33 yards and two majors. Of all the things to get excited about if you’re a Lions’ fan, leave room to feel very good that your star running back will do what is asked of him, even if it means somebody else’s star shines more brightly.

THEY HAVE ALL THE INGREDIENTS THEY NEED

For some teams, the question of “who are they in 2022?” wasn’t really there as they didn’t have an awful lot to prove out of the gate. Winnipeg comes to mind. So does Saskatchewan, really. *See the takeaway after this one before reacting with “yeah, but…”

For others, Week 1 offered up a nice, warm cup of “We can see the potential, it seems obvious.”

In losing by a couple of points to the defending champion Blue Bombers, the Ottawa REDBLACKS illustrated that they will, indeed, be much better than they have been the last couple of seasons. In fact, if they hadn’t managed the clock so poorly at the end of the first half we might be talking about a narrow win for Ottawa instead of a promising loss. There were a few other mistakes in there that might’ve turned the tide for them, as well. So the next job for Paul LaPolice and his crew is to eliminate the big whoopsies moving forward.

The Calgary Stampeders, I’d heard a few say, won’t be a challenger for the top of the division this season. I wasn’t so sure of that prior to the start of the campaign and their win against Montreal cemented my own notion that they can make a bid for first once again. If Bo is Bo, so much the better but even if he is not, Jake Maier still looks fab. Everywhere else on the field Thursday night, the Stampeders looked the part and with running back Ka’Deem Carey doing his happy warrior thing, there ought to be oodles of optimism in Cowtown.

And the BC Lions? C’mon. You saw it. Yes, their dominant night came against the rebuilding Edmonton Elks, but I’m merely talking about having the right ingredients here and the Lions showed they have the ability to prepare one hell of a feast in 2022.

NOT THAT THEY DIDN’T HAVE AT LEAST *SOMETHING* TO PROVE

If it was already pretty widely granted that the Saskatchewan Roughriders were going to be be a very good team in 2022, there was one very glaring question mark surrounding the team’s potential to be a serious challenger for ‘best in show’ this season; Could quarterback Cody Fajardo and his fleet of impressive receivers ignite a decent vertical game?

Over the course of the first half of their win against Hamilton, the evidence suggested that the same old problems might well plague the green and white, a team that ranked last in completion percentage for passes of 20 yards or more in 2021.

That second half, though? The clouds parted and the angels did sing. Completions of 41, 24, 24, 33, 21, 21 and 25 yards against what most everyone agrees is a pretty good secondary. Now, the trick is to keep that going.

BONUS TAKEAWAY: I love that defensive coordinator Jason Shivers’ playbook is filled with such colourful prose. I envision him sitting at his desk, drawing up schemes with a giant peacock feather quill, giggling as he scratches out designs. Then ending with a great and dramatic sweep of his arm before returning the quill to its ink well. To be or not to be? That’s not a question for Jason Shivers. He knows the answer is ‘to be.’ This is gonna be fun.

HE WILL OFFER NO EXCUSES, HE WILL ASK FOR NO MERCY

Evans was not at his best in the Ticats’ loss in Regina, throwing two picks and fumbling twice. But a 30-13 loss wasn’t all his fault. Wait. What?

“It’s a hundred per cent my fault,” Evans said in the aftermath of the loss.

“It’s gonna be painful film to watch,” he added. “But I can’t wait to watch this and learn from it.There’s no way to get better if you run from it, right? So I’m gonna dive straight into it and take all the coaching I can on it.”

“And then we find ourselves back here on November 20th, the film from Week 1’s not gonna look like the same ball team.”

That’s the kind of talk you want to hear from your quarterback when adversity strikes. So is a refusal to point the finger at anyone else, even if Evans was under constant siege on pretty well every snap. “You know, I’m the one with the ball in my hands at the end of the day so I’ve gotta take care of it,” he said in answer to a question about pass protection.

“I promise you that I’m gonna be much better than this.”

A couple of players looked like their old selves once again in Week 1, after each of them had humdrum years in 2021, coincidentally, both in Toronto.

Linebacker Cameron Judge seemed much more like the guy we got to know when he was starring in Saskatchewan and being named a West nominee for Most Outstanding Canadian, when he made his debut as a Calgary Stampeder on Thursday night. In leading the Stamps with six tackles, Judge looks like he’ll enjoy life in the Calgary linebacking corps.

And Charleston Hughes? The 38-year-old defensive end is back in Saskatchewan and in his second debut with the Riders he looked much more like his old self, with a tackle and a sack, a forced fumble and a recovery. With the spring in his step returning, and a plan to rotate him in rather than asking him to dominate from opening kick to final gun, game one of his return showed us that we can expect a few big things from number 39 after all.

AND FINALLY… You have my attention, Dru Brown.