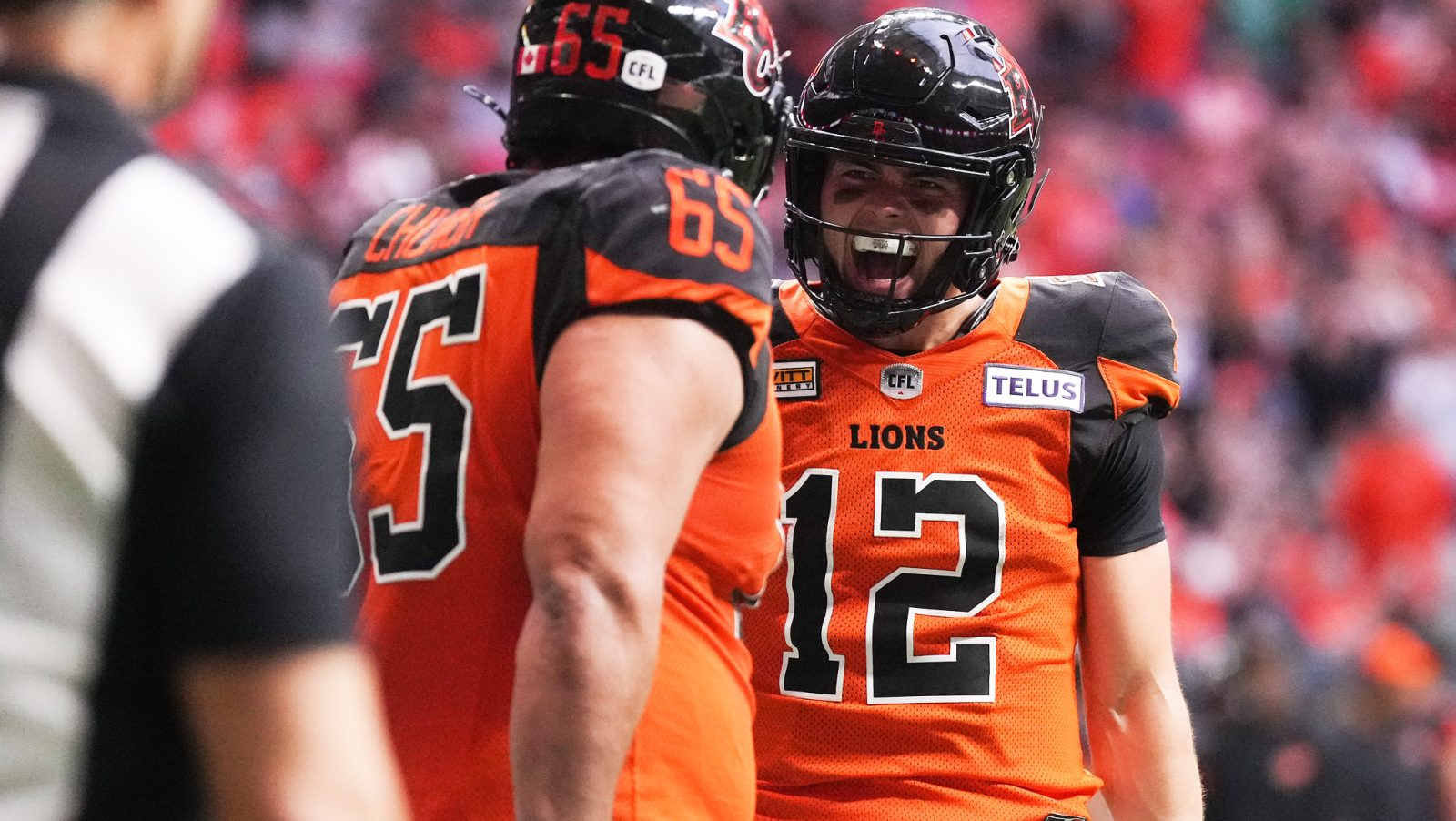 Some have called Nathan Rourke the most exciting quarterback to come through the CFL Draft in decades. Personally, I’ve been on the “future superstar” bandwagon for some time. Rourke looked every bit of those lofty accolades on Saturday night.

34,082 people watched Rourke lead the BC Lions to an emphatic 59-15 win over Edmonton to close out a dynamite Week 1, and they got their money’s worth. Rourke was nothing short of electric in throwing for 282 yards and three touchdowns; he also ran for 78 yards and two more majors. With a renewed excitement in Vancouver for a resurgent Lions team, the home opener couldn’t have gone any better…and Rourke is the main reason why.

Many wondered how BC was going to react when franchise quarterback Michael Reilly announced his retirement in the off-season. Would they go after the big names available in 2022 Free Agency? Would they swing a trade to fill the void? Instead, head coach Rick Campbell decisively named Rourke the starter, showing well placed faith and confidence in the team’s 2020 second round pick.

We got a sneak peak of what Rourke was capable of last season as a rookie. But Saturday at BC Place was at a different level. Yes, Rourke used his incredible athleticism numerous times, but I loved that he didn’t lean solely on his physical gifts.

We saw Rourke exercise patience and vision like a quarterback with 100 professional starts under his belt, not less than a handful. He trusted his offensive line, let plays develop, and cycled through progressions at an elite level. The patience Rourke showed on screen passes and the composure to use safety valves and checkdowns isn’t what we’re used to so early in a starter’s tenure. When Saturday was all said and done, Rourke had thrown just three incomplete passes and no interceptions.

Like any quarterback, Rourke will have his ups and downs as the season goes on. But his first start of 2022 was full of promise and validated BC’s decision to hand the ball to him immediately. I thought we had a superstar on our hands prior to this past weekend, and Rourke’s performance against Edmonton did nothing to change that.

Calgary and Winnipeg opened the 2022 season with big comeback wins on Thursday and Friday, respectively. And neither team would have completed those comebacks without stellar performances from a pair of backup quarterbacks in high pressure spots.

It started Friday at McMahon Stadium when Bo Levi Mitchell, in the midst of a solid outing, went down with an ankle injury in the fourth quarter. Locked in a 27-27 tie with Montreal, the Stampeders turned to Jake Maier for the final two drives of the game, and he delivered. Maier completed four of five passes for 80 yards, which included a composed 40-yard march to setup the eventual game-winning field goal from Rene Paredes.

One day later, it was Dru Brown’s turn to lead the Bombers on a last-minute field goal drive. Trailing Ottawa 17-16 with less than two minutes to go, Zach Collaros was correctly removed from the game by the league’s injury spotters. All Brown did was complete three straight passes for a combined 51 yards to put Marc Liegghio in a spot to kick a 25-yard game winner.

That’s some nerves of steel stuff from both.

I know they ended up losing their season opener, but I thought the REDBLACKS showed plenty to be positive about. It started with quarterback Jeremiah Masoli’s 380-yard performance, against THAT defence, in his Ottawa debut. Knowing what Masoli was brought in to do, an outing like that was huge.

Jaelon Acklin, who followed Masoli to the REDBLACKS in free agency, went for 143 yards on six catches and continued to cement himself as one of the CFL’s best receivers. I really liked what we saw from fellow receiver Darvin Adams, who joined Ottawa for after six seasons in Winnipeg. Adams led the team with nine targets and finished with 71 yards on seven catches.

Greg Ellingson was signed by the Bombers to help offset the departures of Adams and Kenny Lawler, and he delivered. In his quest for a sixth 1,000-yard season, Ellingson racked up 74 yards and a touchdown on seven catches in his Winnipeg debut. Even Lawler, despite a tough loss, impressed in his first game with Edmonton. The league’s leading receiver in 2021 finished with 72 yards on five catches.

On defence, Cameron Judge looked great in his Calgary debut. Starting at his natural WILL linebacker position, Judge led the Stamps with six defensive tackles and was all over the field. He and middle linebacker Jameer Thurman are going to be a handful this year.

We have already talked about how good Rourke was, but he wasn’t the only standout as the Lions put the league on notice with their 59-point outing. Tailback James Butler went for 141 totals yards and four touchdowns and was a big play machine all night. The same was true for a healthy Lucky Whitehead, as he caught all six of his targets for 110 yards.

Last but certainly not least would be the Saskatchewan Roughriders. Against a high-end Hamilton team, Saskatchewan’s defence was dialled from the get-go. Larry Dean looked electric in his first game since 2019 and finished with seven tackles, a sack, and a forced fumble. I’m excited to see what he and free agent splash Darnell Sankey can do as a tandem.

The Riders picked right up where they left off in the trenches, too. AC Leonard, who led the league in sacks last year, and Pete Robertson combined for three sacks against the Tiger-Cats. Even with Jonathan Woodard trying his hand south of the border, it looks like Sask is going to be a handful off the edge once again.

Cody Fajardo looked great against Hamilton’s vaunted defence, too. Fajardo threw for 311 yards and a touchdown and added 42 more yards on the ground with another major. It was great to see the old chemistry with Fajardo and receiver Shaq Evans back in action, too. For various reasons, the latter had a tough 2021, but Evans was targeted ten times and ended up with 92 yards, the most from any receiver in the game.