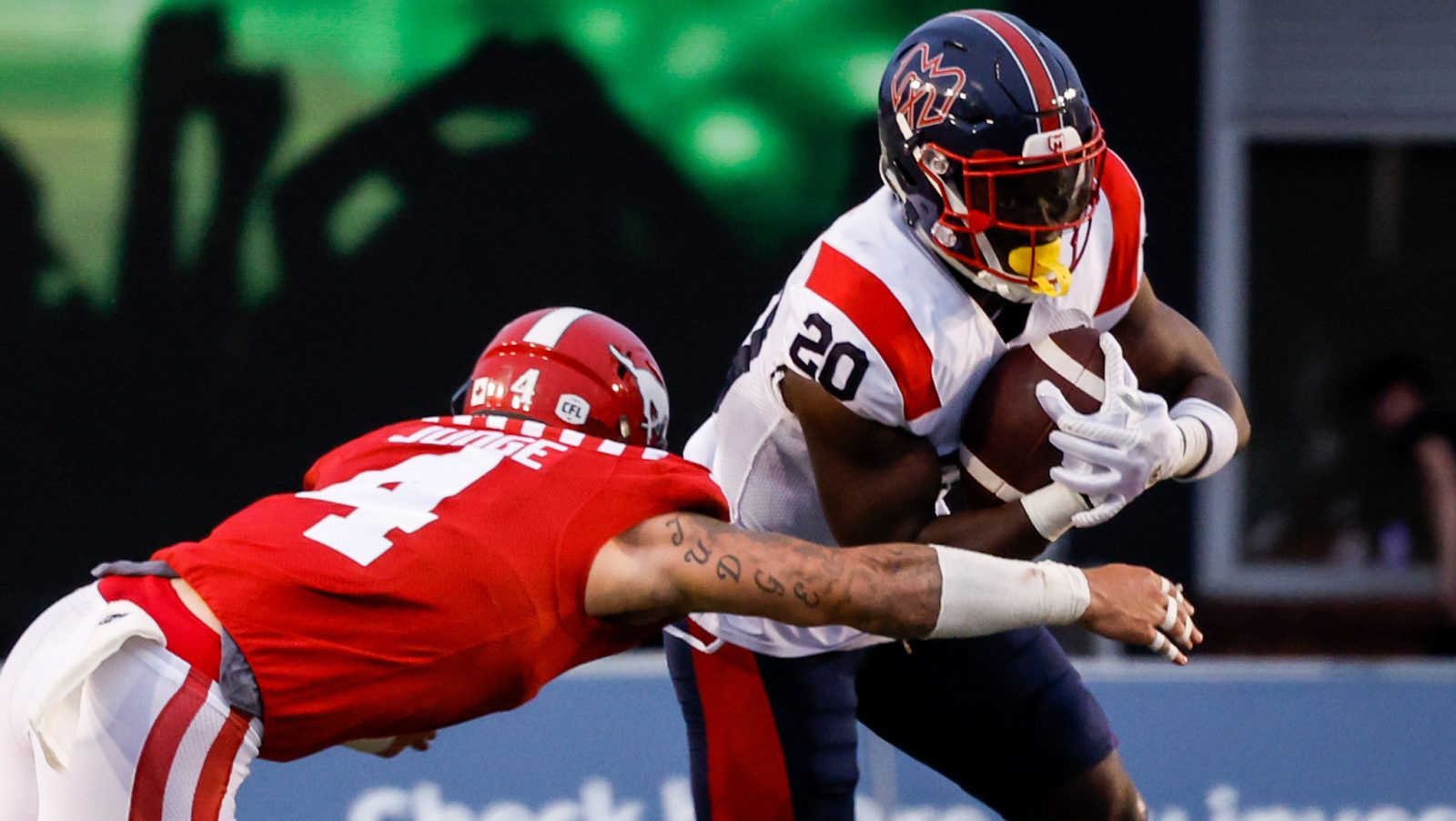 Entering the second week of the CFL regular season, there is a lot to be excited about from a fantasy perspective. The darker part of Week 2? BC is off, so no clamoring for Nathan Rourke or James Butler after the two combined for 87.2 fantasy points in Saturday’s win over Edmonton.

Even with the Lions on a bye, Week 2 should provide fans with another dose of action-packed football, especially from the pivot position. Cody Fajardo ($12,090) and the Saskatchewan Roughriders will face an Elks defence that allowed 490 yards and 59 points last week, so there’s already one enticing option at quarterback.

This weeks Start vs. Sit packages a few budget friendly options for CFL Fantasy fans to consider when building their Week 2 rosters.

Jeshrun Antwi entered the game for the Montreal Alouettes after William Stanback‘s injury. The third-year back made the most of his opportunities in the season opener, finishing with 98 yards on seven carries, including a 70-yard run. Take away the long gallop through Stampeder Land and Antwi still comes out averaging nearly five yards per carry.

Antwi will certainly have an opportunity to find running lanes on Thursday night as he faces a Toronto Argonauts defence that allowed 111.6 rushing yards per game and gave up 5.7 yards per carry to opposing ground games last season.

Toronto’s McLeod Bethel-Thompson completed 203 passes, throwing for 2,303 yards and 12 touchdowns on his way to being named an East All-Star last season.

In 2021 the Toronto passing attack averaged just 7.4 yards per pass and was among the lowest in the league in deep ball completions with 13 completions of  30 yards or longer.

Over the off-season the Argos signed big-play wide receivers Markeith Ambles ($6,036) and 2019 Most Outstanding Player, Brandon Banks ($7,000) in hopes of maximizing the deep ball.

Establishing rhythm in the passing game will be crucial for the Argos, but it won’t be easy. The Montreal defence did not allow a completion of more than 28 yards against Calgary in Week 1 and held Bo Levi Mitchell to a pass efficiency mark of 75.5. Fantasy users would be wise to wait, at least for this week, on the prospective excitement of the Toronto offence.

After the departure of Kenny Lawler in the off-season the Winnipeg Blue Bombers were in search of an alpha dog at wideout. They seemed to have found that in the form of free agent signing Greg Ellingson.

Ellingson looked a lot like the “close your eyes in June and watch Greg Ellingson give you 1,000-plus receiving yards in November,” player that he was in Ottawa from 2015-2018.

He caught six of his seven targets for 74 yards and a touchdown in Week 1. And when Winnipeg needed it most, Dru Brown ($7,000) turned to Ellingson for a 21-yard pick up, setting up the game winning field goal from Marc Liegghio.

Brady Oliveira tied for the third-most carries in Week 1, yet managed only 17 yards on his 10 attempts, certainly not the showing many fantasy players had hoped for.

The Bombers also have running back Johnny Augustine ($4,084) at their disposal, who was given three carries in their Week 1 matchup. The Winnipeg backfield combined for 27 yards on 13 carries in Week 1 and were almost outgained by their quarterbacks, who rushed for 20 yards on five attempts.

The rotation of the Winnipeg backfield is something worth noting, be aware of the usage of a backfield by committee, the bane of any fantasy players’ existence.

Richie Sindani showed off his downfield reliability in Calgary’s Week 1 win over the Montreal Alouettes. Sindani averaged 14.4 yards per reception in a seven-catch, 101 yard performance, a 17.1 point performance from a fantasy perspective.

Of course, Reggie Begelton ($10,873) and Kamar Jorden ($8,573) remain fixtures in the Stamps’ passing attack. The addition of Sindani as a play-making third option expands how either Bo Levi Mitchell ($8,405) or Jake Maier ($7,000) can expose the Hamilton Tiger-Cats’ secondary.

In Week 1, the Ticats yielded 311 yards to Saskatchewan’s Cody Fajardo. Despite giving up just one passing major, they did allow five completions of at least 20 yards and another three of 30 yards or more, meaning there will be plenty of opportunity for the Calgary receivers to make plays on Friday night.

The fantasy outlook is for Begleton and Jorden to improve upon their Week 1 numbers, but on the short list of Week 2 value plays, Sindani is front and center.

Hamilton running back Don Jackson would have cost players the fifth-highest price amongst his position group in Week 1. In his season debut, Jackson produced just one rushing yard and saw five carries.

Jackson did have 19 yards receiving on two targets, but that was far from enough to remove the sting of the price point some may have paid for the Hamilton back.

The encouraging sign is that Jackson does face the same Calgary defence that gave up a 70-yarder to Montreal’s Antwi.  However, it’s tough to imagine the Stampeders’ run defence giving up a big play of that calibre in consecutive weeks.

The fantasy outlook for Jackson is much, much better in Week 2, but it still feels like too much of a gamble after last week.

Saskatchewan running back Jamal Morrow racked up 179 all-purpose yards on a combined 25 touches in Week 1, producing 14.7 fantasy points. He had just 14 yards on nine carries, but his receiving skills out of the backfield (three catches, 61 yards) were on full display.

With that volume of target share, Morrow is not going to be a bargain play much longer, especially if he begins finding the end zone.

Is it likely that the Elks will surrender 59 points again? No, but if you’re stacking Roughriders against the Elks’ defence this week, then Morrow had better be a part of it.

There were flashes of Arkbuckle’s upside on display in Week 1, yet the three interceptions cast a shadow on his 8.8 average yards per attempt, which was third-best among quarterbacks in Week 1.

In the Elks’ season opener, we did see rookie Tre Ford ($5,000) make his debut, as did Kai Locksley ($2,500) who punched in a goal line score (and was also targeted once). Fantasy players should be aware that a rotating system of quarterbacks could show itself once again in their Week 2 matchup.

The upside to Edmonton’s passing game was that Kenny Lawler ($8,606) was still able to produce 12.2 fantasy points on just six targets (five receptions, 72 yards). The Riders allowed 222 yards on 18 completions, including a 71-yard touchdown, which means Lawler could see an uptake in target share, and deep-ball attempts in Week 2.