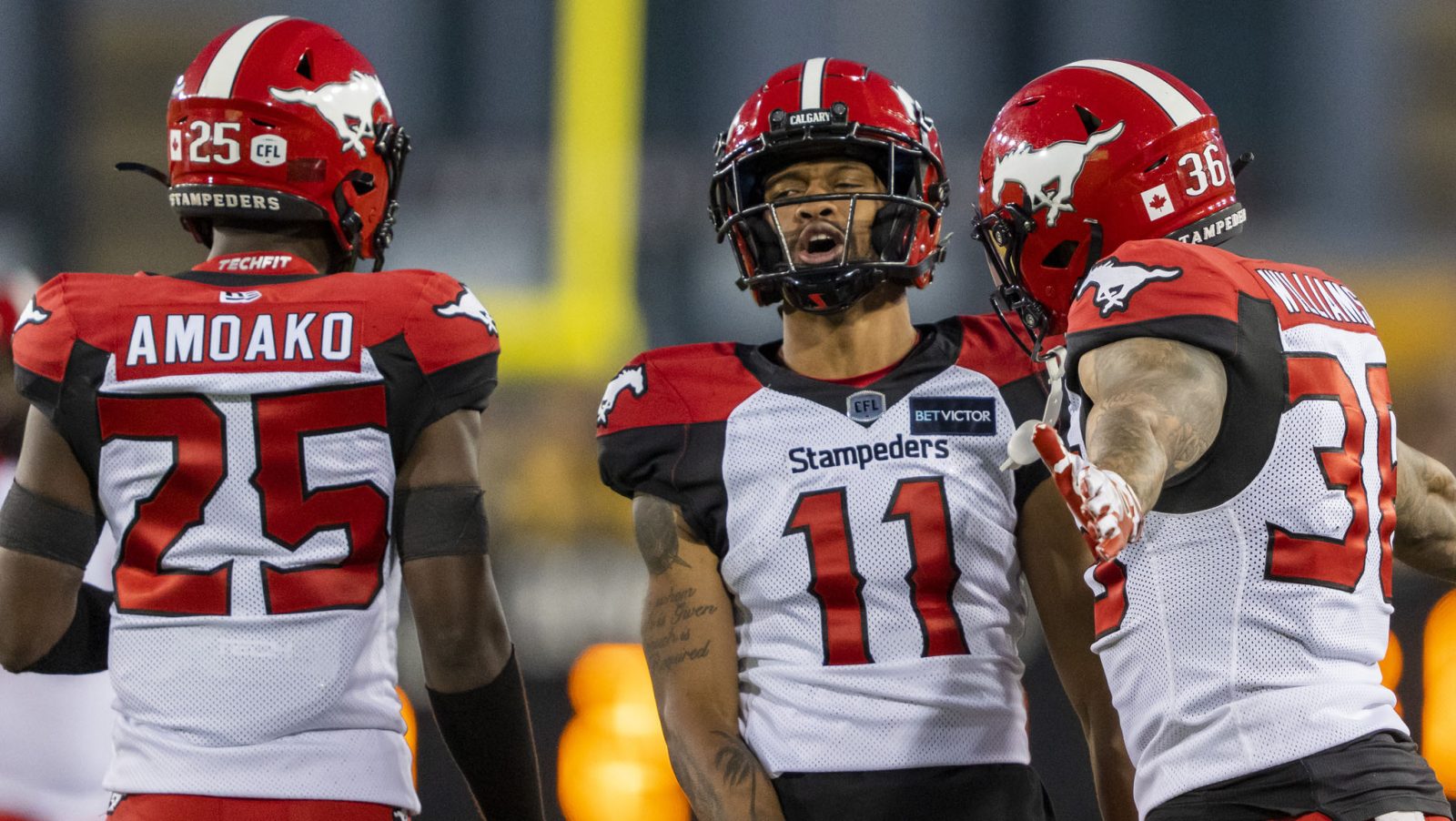 HAMILTON — The Calgary Stampeders were able to shake off a 21-point first-half deficit on Saturday to stun the Hamilton Tiger-Cats in overtime, 33-30.

The Stampeders trailed 24-3 at halftime, but out-scored the Ticats 27-6 in the second half, adding a Rene Paredes field goal in the extra frame and sealed the win with an interception from Jameer Thurman.

Bo Levi Mitchell made 24 of 42 passes for 313 yards, two touchdowns and an interception.

Ka’Deem Carey was injured early in the first quarter and did not return. The Stamps also lost his backup, Peyton Logan (nine carried, 45 yards) in the second half.

Dane Evans was 36-51 for 425 yards with three touchdowns and two interceptions in the loss for Hamilton. Tim White led all receivers with 11 catches for 131 yards and a touchdown.

RELATED
» Box Score: Ticats, Stamps by the numbers
» Through the Lens: Stamps at Ticats
» Watch: Ticats extend lead with touchdown from White
» Stamps’ OT win a game to build on

The Tiger-Cats opened scoring on their first drive of the day, though they didn’t get to the end zone. Kicker Michael Domagala chipped in a 21-yard field goal at the end of an eight-play drive just 3:34 into play, putting the Ticats up 3-0.

The Ticats looked to double their lead but had their field goal attempt quelled with a too-many-men call against Calgary to keep their drive going. Evans cashed it in quickly, finding his running back, Sean Thomas-Erlington for the 14-yard catch and the touchdown. Domagala missed the convert, though, making it a 9-0 game at 11:20.

The Ticats closed out the first quarter in fine fashion. Evans found Steven Dunbar Jr. for a 38-yard touchdown hookup with zeroes on the clock, sending the crowd at Tim Hortons Field into a frenzy. Running back Maleek Irons came into the game while Thomas-Erlington was being looked at by trainers and ran in a two-point convert, making up for the earlier missed point. The Ticats took a convincing 17-0 lead into the second quarter.

After a quiet offensive stretch for both teams through much of the quarter, Evans and the Ticats fired it up again with just over two minutes before the break. Evans led an eight-play, 50-yard drive that he capped with a 25-yard touchdown pass to Tim White. Domagala’s convert at 12:52 pushed the score to 24-0.

Calgary finally got onto the board with a 23-yard field goal from Paredes. The Stamps’ kicker was a rare bright spot in a dismal half for his team, as he pushed his consecutive field goals-made streak to 23.

Evans went into the locker room at halftime having made 21-26 passes for 245 yards and three touchdowns. His halftime totals were better than his entire day of work last week (18-28, 222, a touchdown, two interceptions) in his team’s loss in Saskatchewan.

The Stampeders’ defence started to offer some resistance in the third quarter. First, Titus Wall came up with an end zone interception on Evans. While the Tiger-Cats’ defence responded in kind, with Jovan Santos-Knox intercepting Mitchell on the next drive, the Stamps’ defensive line came up with a short yardage stop on backup QB Matthew Shiltz, forcing a turnover on downs at their own nine-yard line.

The play sparked the Calgary offence, which made the long trip up the field to get its first touchdown of the day.

Mitchell’s eighth play of the drive resulted in second-year receiver Luther Hakunavanhu making an acrobatic catch with Hamilton defensive back Richard Leonard draped all over him. Paredes’ convert went through at 12:32, making it 24-10.

The Stamps carried their momentum into the fourth quarter with a 46-yard field goal from Paredes at 2:12, cutting the lead down to 11, at 24-13.

While the Stamps were playing better in the second half, they had a big hill to climb to get back into the game. After Evans was unable to get it to Tim White in the end zone, the Ticats got their first points of the half thanks to Domagala’s 18-yard field goal at 6:20 to make it a two-score game.

Mitchell was undeterred, immediately airing out a 42-yard pass to Kamar Jorden to get into striking distance once again. Four plays later, Mitchell gave Reggie Begelton an 18-yard pass for the touchdown, seizing momentum in the game. Paredes’ convert made it 27-20 at 9:12.

As the Ticats pressed on a short yardage play with under four minutes to go, Wall made an even bigger play than his interception. With Evans pushing for the first down, Wall managed to strip the ball away from the quarterback and raced 45 yards for the touchdown, with Paredes’ steady foot incredibly tying the game at 27.

Former Stamps’ DB Tunde Adeleke made a big play for the Ticats to break up a Jorden reception deep in Calgary’s end that forced the team to punt. Lawrence Woods‘ strong return let the Ticats set up at Calgary’s 38-yard line with under two minutes to go. A quick Hamilton possession brought Domagala out to the 39-yard line for the go-ahead field goal attempt that danced in the wind on its way through the uprights. Hamilton took a 30-27 lead at 13:41.

Mitchell led the Stamps on a high-stakes drive up the field, surviving a third-down gamble along the way as the clock ticked through its final minute. Paredes lined up his fourth field goal of the night, sending a 39-yarder home to send the game to overtime.

In the extra session, Paredes was called upon again and his 35-yard field goal put the Stamps up by three. As Evans looked for Thomas-Erlington, the ball skipped off the running back’s hands and was scooped up by Jameer Thurman, eliciting the painful memory of the Ticats’ Grey Cup overtime loss to Winnipeg just over six months ago.

The Tiger-Cats take their show on the road next week and travel to Winnipeg to face those Blue Bombers at IG Field. The Stamps will be at home in Week 3, hosting the Edmonton Elks.