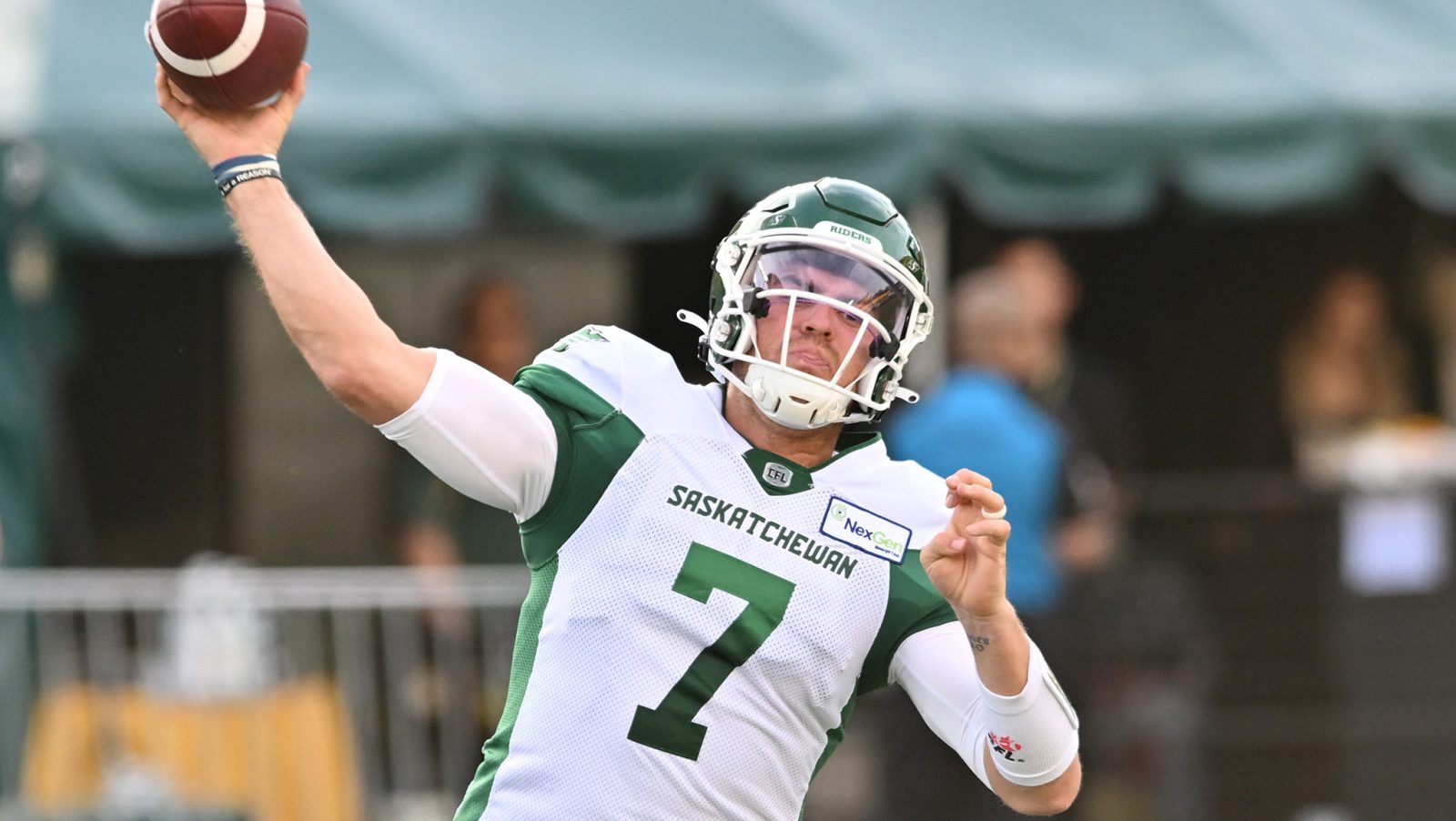 EDMONTON — In a defensive battle between division rivals, the Saskatchewan Roughriders were able to hold off a reenergized Edmonton Elks team to close out Week 2.

Cody Fajardo and the Riders improved to 2-0 on the season with a 26-16 win over the Elks on Saturday night.

Running back Jamal Morrow made a statement in Week 2, leading the Saskatchewan offence with 126 rushing yards and a touchdown on 17 carriers. Morrow also added another 28 yards receiving in the win over Edmonton.

Fajardo looked equally impressive in his second start of 2022. He completed 20 of his 26 passing attempts, throwing for 247 yards and capped off his night with a touchdown in the fourth quarter to help give the Riders a late lead.

On the opening drive of Week 2, the second-year back matched his Week 1 yardage and needed just two carries to do so.

However, the Saskatchewan momentum was halted as Fajardo was taken down on a second down scramble, forcing the Riders to try for a field goal.

Saskatchewan kicker, Brett Lauther showed off his range, splitting the up-rights from 50 yards away to give his team an early three point lead.

The first quarter of action was a defensive battle between the two teams. With Saskatchewan defensive coordinator, Jason Shivers matching up against his former mentor in Edmonton head coach, Chris Jones.

Jones’ defence looked to be energized early on. After holding the Riders short of a first down on second and long, they were able to force an incompletion from Fajardo on third down to force a turnover on downs.

The battle continued into the second quarter. On the opening drive of the new quarter, Saskatchewan linebacker, Derrick Moncrief showed off his ball skills. Lurking in coverage to intercept a pass from Edmonton quarterback, Nick Arbuckle.

With their offence back on the field after the interception, Fajardo was able to engineer an 11-play scoring drive for the Riders. Ending with an 18-yard field goal from Lauther to help push the Saskatchewan lead to six.

Still in search of their first points of the game, the Elks called upon veteran kicker, Sergio Castillo to attempt a 52-yard field goal. Castillo missed the long range attempt, but the Elks coverage unit was able to recover a fumble by the Riders on the return attempt.

Starting the drive in the red zone following the fumble recovery, Arbuckle wasted no time taking advantage of the field position.

The Elks quarterback found receiver Kenny Lawler on back-to-back passing plays. One of which was a highlight-reel touchdown catch by Lawler in the back of the end zone to give the Elks their first lead of the game.

The touchdown from Lawler also marks his first major as a member of the Green and Gold.

On the ensuring drive, Fajardo and the Riders offence managed a big play of their own. Fajardo connected with receiver Shaq Evans for a 36-yard completion to help move the Riders downfield.

Following the completion to Evans, the Riders put the ball back in the hands of Morrow, who continued to build on an impressive first quarter. Morrow found the end zone on a two-yard rush to help Saskatchewan regain the lead to end the first half.

To open the second half, Arbuckle was looking for another play through the air. This time finding Caleb Holley for a 44-yard completion. Holley was added to the Elks roster in the Week leading up to Saturday’s matchup.

Following the big pick-up from Holley, the Elks would get within striking distance. However, the Rider defence held its ground, forcing the Elks to settle for a 12-yard field goal on the opening drive of the second half.

Edmonton’s defence matched the second half start of their offence. After forcing an incompletion on a pass intended for Evans, defensive linemen, Esa Mrabure was able to fight his way into the Rider backfield to bring down Fajardo for a sack.

Tempers began to boil over early in the second half, Saskatchewan’s Moncrief was ejected from the game following an altercation between the two teams.

Edmonton’s offence continued to find success with the deep ball in the third. Emmanuel Arceneaux reeled in a 66-yard pass from Arbuckle to put the offence inside the Saskatchewan 20-yard-line.

The play from Arceneaux would help to set up a 13-yard field from Castillo to give Edmonton a one-point lead heading into the fourth quarter. 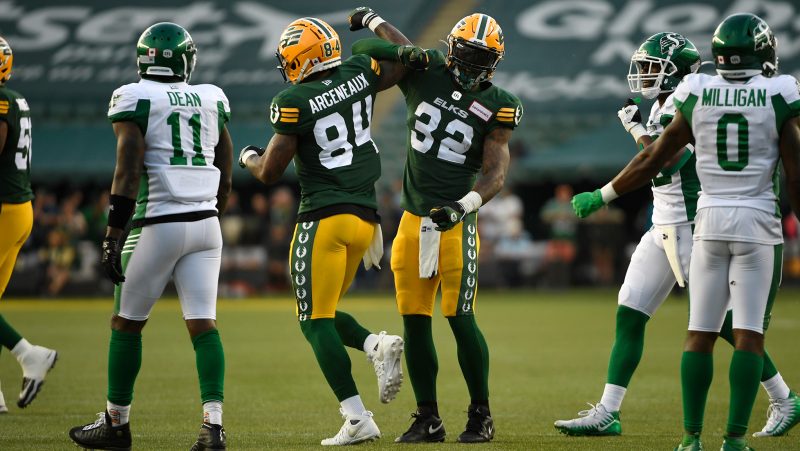 Emmanuel Arceneaux is averaging 20.8 yards per catch through the first two games of the regular season (GoElks.com).

Despite a quick burst of offence from the Riders to open the fourth, the Elks defence would hold Saskatchewan to a field goal. Lauther made his second long-range field goal of the night, knocking through a 41-yard attempt to help the Riders regain a narrow lead.

The Riders trailed late in the fourth after a 37-yard field goal from Castillo gave the Elks a 16-15 lead. However, Fajardo and his offence looked determined to overcome the Edmonton defence.

With under five minutes to play, the Saskatchewan pivot completed all four of his passing attempts, including a 28-yard touchdown pass to Regina native, Mitchell Picton.

Saskatchewan opted to attempt the two-point conversion, and Fajardo once again found Picton in the end zone to help push the Rider lead to seven.

Looking to respond, Arbuckle had the Elks offence poised to make a long drive downfield. But on a second and short, Saskatchewan’s Larry Dean came away with a huge sack that resulted in a forced fumble recovered by the Riders.

After a missed 44-yard field goal from Lauther, the Elks’ offence had an opportunity to respond and were down by just seven point.

A tough Saskatchewan defence refused to break, tackling James Wilder Jr in the backfield and forcing two incompletions from Arbuckle to help seal a Win for the Riders.

Looking ahead to Week 3, the Elks will be taking on the provincial rival, Calgary Stampeders for the first time this season. While the Riders will be travelling east for a battle with the Montreal Alouettes.