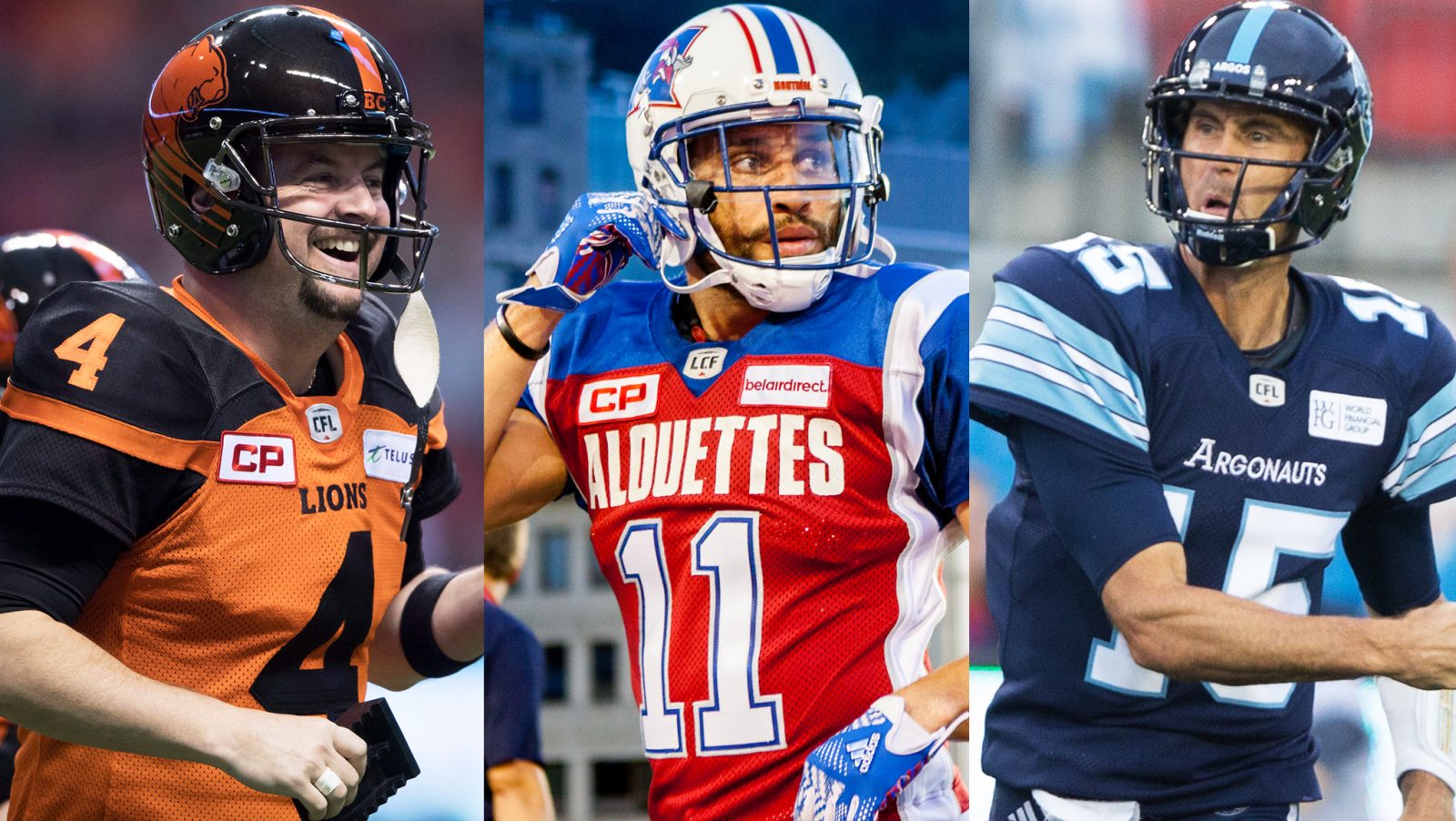 TORONTO — Five iconic players and three legendary builders will join the hallowed halls of the Canadian Football Hall of Fame (CFHOF) and Museum in the Class of 2022.

Quarterback Ricky Ray and linebacker Chip Cox are first-ballot Hall of Famers, and they will be joined in the Player category by kicker Paul McCallum, fullback Tim Tindale, and Dick Thornton who played on both sides of the ball. To be inducted in the Builder category will be former CFL head coach Dave Ritchie, Calgary Colts founder and former general manager Keith Evans, and long-time CFL team executive, Roy Shivers.

“The Canadian Football Hall of Fame is honoured to welcome this year’s incredible class,” said Greg Dick, Interim CFHOF Executive Director. “Their accomplishments on and off the field serve as tremendous inspiration to everyone who loves Canadian football. To the selection committee, thank you for your time and dedication to shining the spotlight on these amazing individuals and their outstanding careers.”

The members of the Class of 2022 will be officially inducted on the evening of September 16 at Tim Hortons Field, and they will also be honoured on the following day at halftime of the Hall of Game with the Winnipeg Blue Bombers set to visit the Hamilton Tiger-Cats in a rematch of the 2021 Grey Cup championship. Kickoff is slated for 4 p.m. ET. Tickets to the game are available for purchase here.

The Media wing of the CFHOF will also welcome two new members – Glen Suitor and Ed Willes – in recognition of their distinguished service in providing coverage of Canadian football. They will be honoured at the Football Reporters of Canada’s annual brunch during Grey Cup Week in Regina.

The Canadian Football Hall of Fame and Museum, located on the fourth floor of Tim Hortons Field, operates as a non-profit registered charity. Located in Hamilton, Ont., since 1963, it is home to more than 80,000 Canadian football artifacts, ranging from equipment and trophies to photos and videos, spanning the rich history of the game. 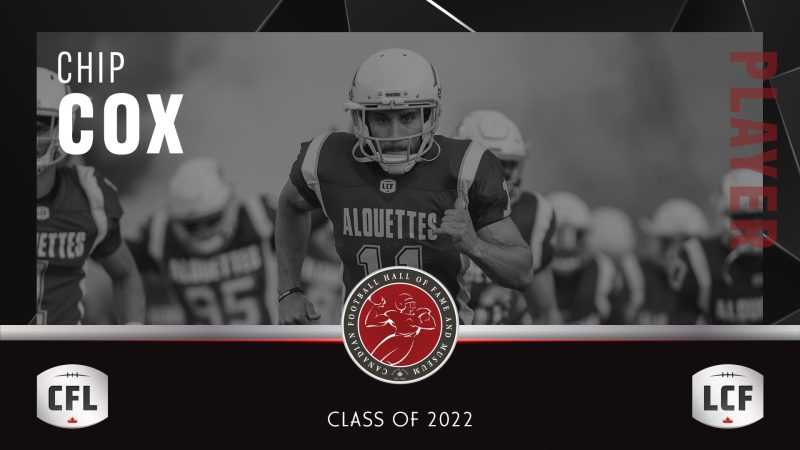 Cox was a stalwart member of Montreal’s defence corps throughout his 13-year career. In 228 games, he finished with 979 tackles (fourth all-time), 23 interceptions and eight defensive touchdowns. He holds the CFL record for fumble return yards with 392.

In 2013, Cox was named the Most Outstanding Defensive player after establishing a then-team record of 115 tackles in a single season, while adding 12 sacks and four interceptions. Cox played in four Grey Cup championship games, winning in 2009 and 2010. He was named a Division All-Star six times and a CFL All-Star on four occasions. 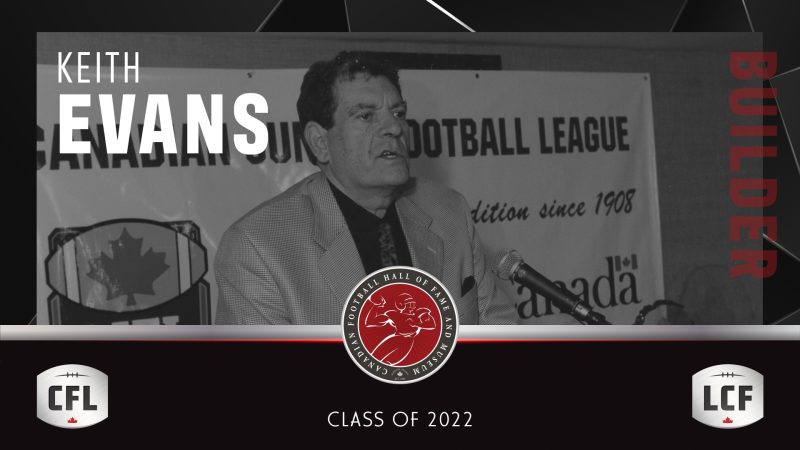 Evans was a steadfast champion for growing the game in Alberta, founding the Calgary Colts of the Canadian Junior Football League (CJFL) in 1965. His association with the team spanned more than half a century, including his tenure as its general manager from 1969 to 2019.

His incredible service to the game garnered him recognition as CJFL Executive of the Year (1987), Calgary Booster Club Sportsman of the Year (1988), a CJFL Life Member honour (1995), the Ed Henick Award (1999) for outstanding contributions to junior football, and induction into the Alberta Sports Hall of Fame (2018). 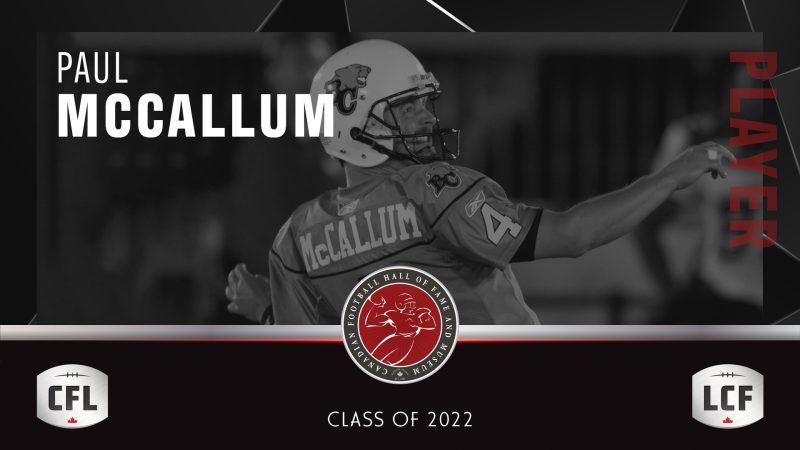 McCallum is one of the best kickers and punters in the history of the CFL. The former Surrey Ram played in 340 games across 24 seasons with the BC Lions, Ottawa Rough Riders and the Saskatchewan Roughriders. He sits second on the list of all-time scorers with 3,145 points, and he is one of only two players to eclipse the 3,000-point milestone.

The two-time Grey Cup champion was named a Division All-Star five times and a CFL All-Star twice. He amassed 722 career field goals with an 80.2 per cent success rate. He still holds the records for longest made field goal (62 yards) and the most consecutive converts made (801). He recorded 84,093 punt yards and 68,432 kickoff yards. 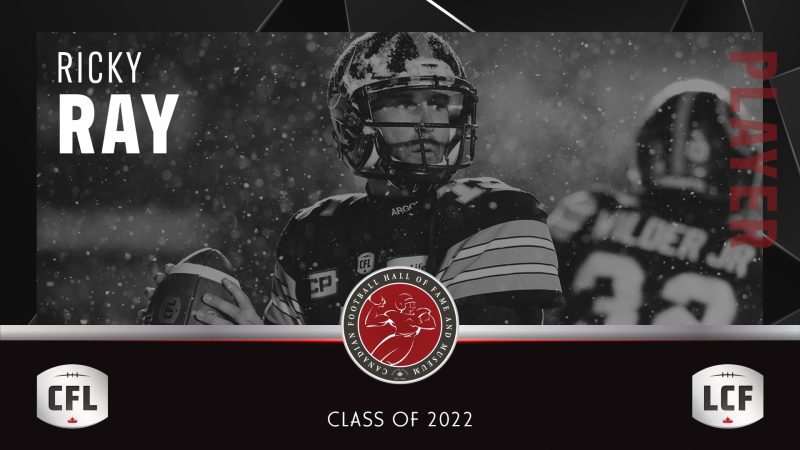 He played in five Grey Cup championships, emerging victorious twice with Edmonton (2003 and 2005) and two more times with Toronto (2012 and 2017). His four Grey Cup victories as a starter still stands as a league record. Ray had a knack for delivering when it mattered most, and sits first in touchdown passes (nine) and second in passing yards (1,512) in the big game. 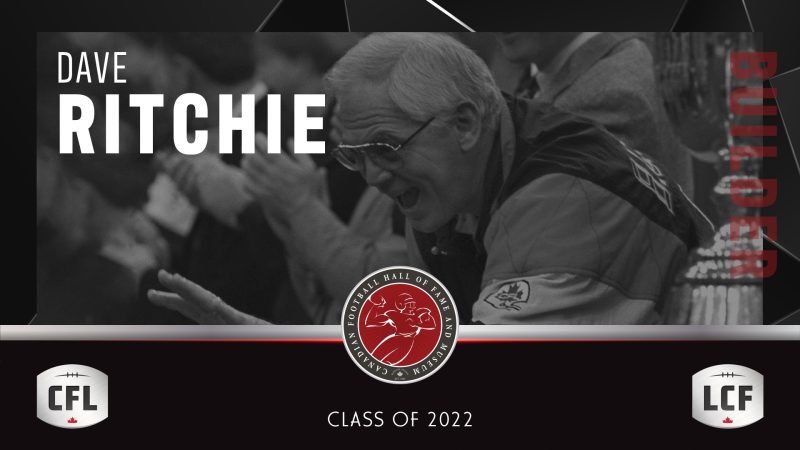 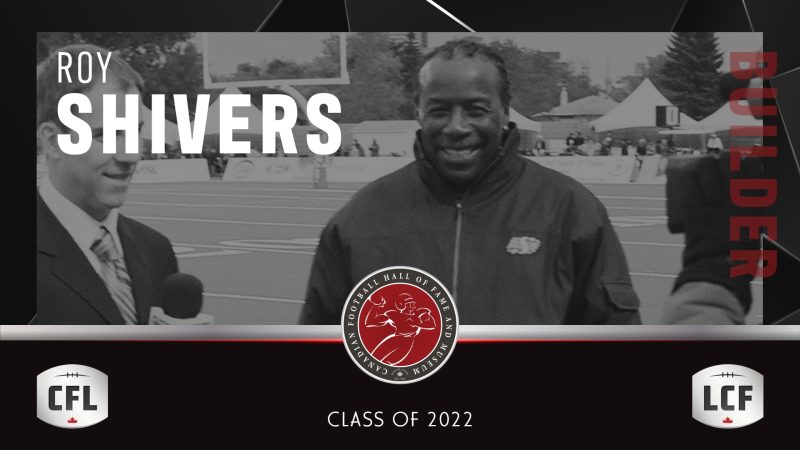 Shivers enjoyed a successful 32-year career in the CFL. He began his journey as an assistant coach with the BC Lions (1983-85) before becoming the team’s Director of Player Personnel (1986-89). He had two stints with Calgary – as an assistant general manager from 1990-94 and he would eventually return in a similar role from 1996-99. He also totalled eight season as a general manager (Birmingham in 1995 and Saskatchewan from 2000-06). His career came full-circle with a return to the Lions from 2008-15 as a member of the team’s player personnel department. 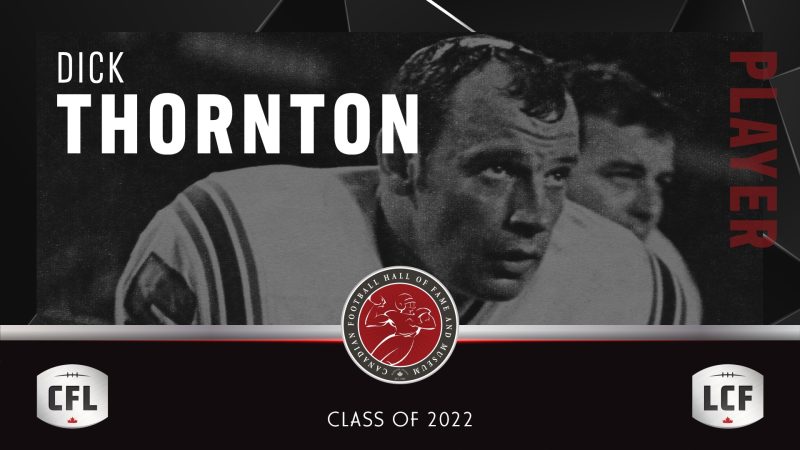 Nicknamed Tricky, Thornton played 12 seasons for Winnipeg and Toronto. He was one of the last true two-way players, showcasing his skill at both defensive back and quarterback. He scored 18 touchdowns in four different ways (rushing, receiving, interception return and fumble return), while passing for five more.

Thornton played in three Grey Cups, winning once in 1962 with the Blue Bombers. Defensively, he recorded 43 interceptions – including two three-interception games – and returned eight for touchdowns. He is a five-time CFL Division All-Star. 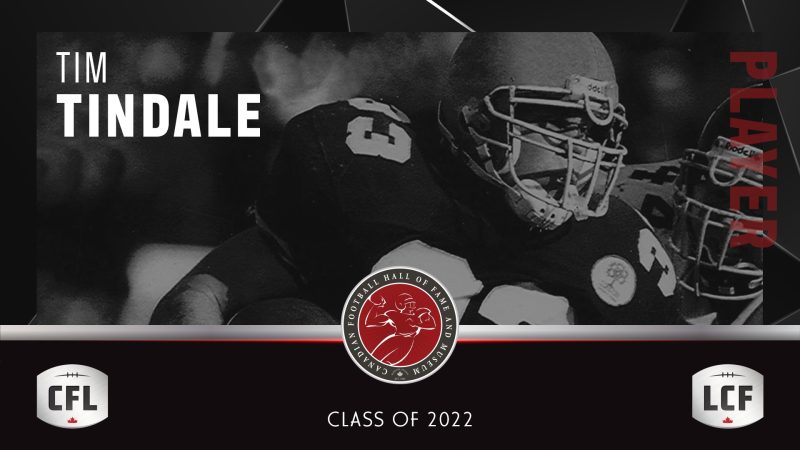 Tindale, a native of London, Ont., played collegiately for his hometown Western Mustangs. The running back won the Hec Crighton Trophy twice (1991 and 1993). In four seasons, Tindale tallied 2,554 yards (7.9 yards per carry) and 36 all-purpose touchdowns.

Tindale’s collegiate resume includes two first-team All-Canadian selections (1991 and 1993), a nod as the Most Outstanding Male University Athlete (1993-94) – a first for a football player – and a then-U SPORTS record for rushing yards in a single season (1,208). He went on to play 37 games for the Buffalo Bills across four seasons.

GLEN SUITOR
​Suitor was nearing the end of his 11-year playing career with Saskatchewan when he joined CjME radio in Regina as sports director. Upon retiring as a player in 1995, he headed to TSN as an analyst for its televised CFL games, teaming primarily with Chris Cuthbert; the duo went on to win numerous awards, including a Gemini Award for best sports play-by-by play or analyst in 2006. A four-time nominee, he won a Canadian Screen Award in 2014 for his work on the 100thGrey Cup.

The Vancouver product is a frequent guest commentator on football programs, including his current gig with Harvard Broadcasting. In recognition of his support and involvement with the Canadian military, Suitor was named an honorary colonel of the 417 Combat Support Squadron in 2015.

ED WILLES
​Willes spent 38 years as a prolific and talented sports writer at several newspapers, including the Medicine Hat News, the Regina Leader-Post and the Winnipeg Sun, while also contributing freelance articles to the New York Times. He was hired as a columnist for The Province in Vancouver in 1998, to cover numerous sports, but he always had a penchant for the CFL. As newspaper staffs shrank, he assumed beat-writing duties for the Lions, while continuing as the lead columnist in the Lower Mainland.

In addition to writing two hockey books, in 2013, Willes wrote End Zones and Border Wars: The Era of American Expansion in the CFL as a look into the league’s venture into seven U.S. cities during the mid-1990s. Willes retired in 2020.