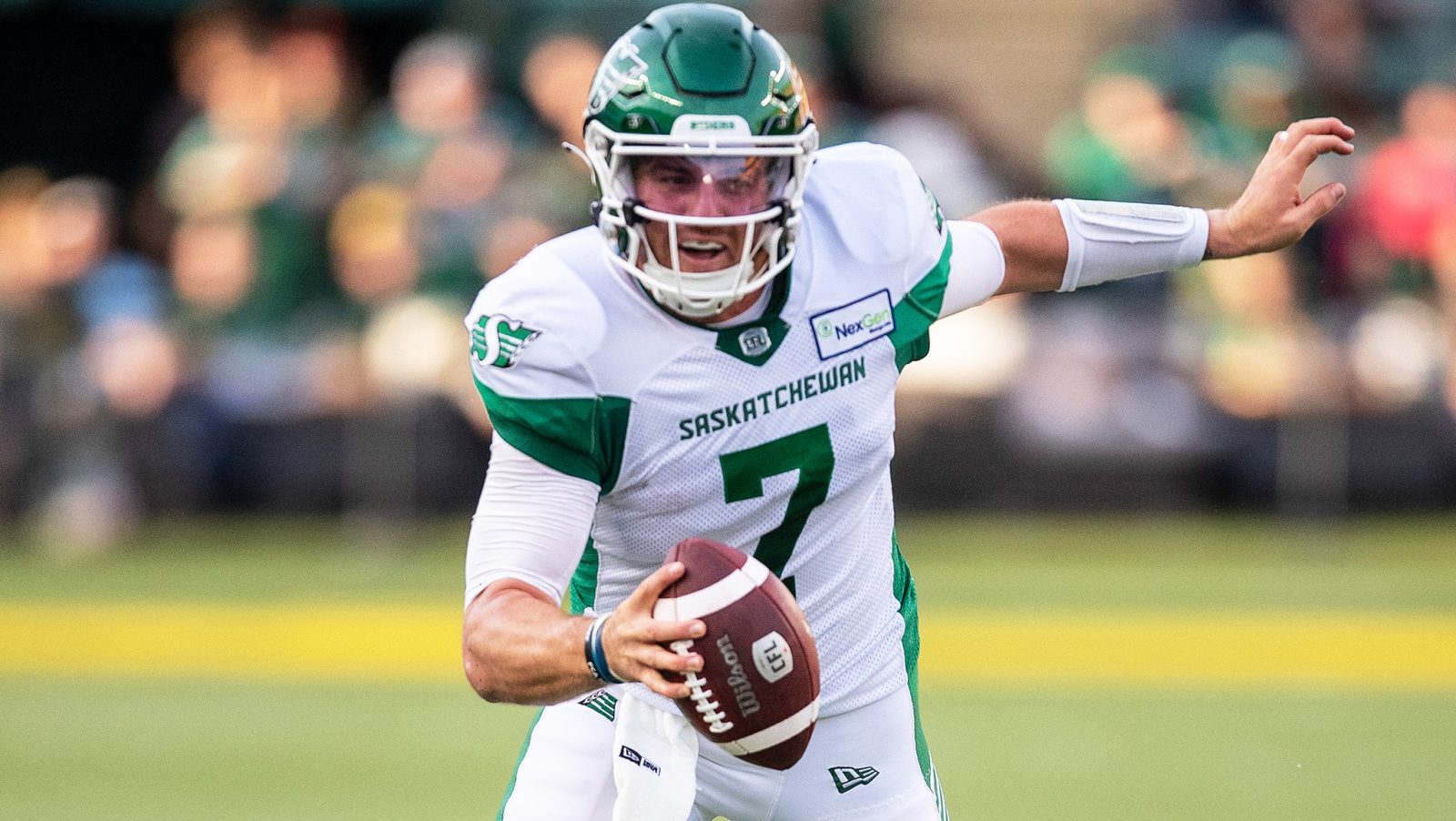 Another round of quarterback matchups produced some electrifying performances in the second week of regular season action.

Let’s take a retrospective look at the target charts for all eight of the quarterbacks involved from Week 2 of the season, as the West continued to squeak past Eastern opponents to open 2022. 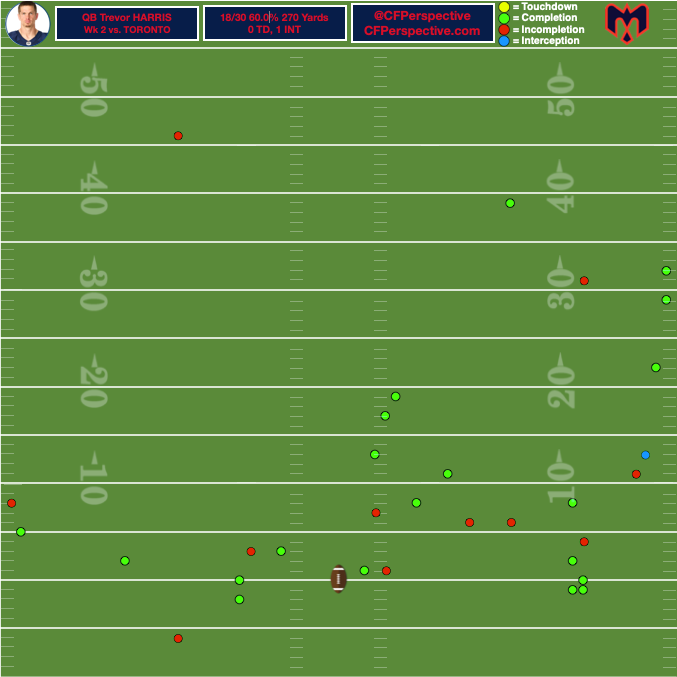 Well, this wasn’t the quarterback I expected to be talking about on target Tuesday, but here we are. Head coach, Khari Jones and quarterback coach, Anthony Calvillo called on Trevor Harris to take over for Vernon Adams Jr. Who was just 2/4 for 14 yards early in the second quarter.

Harris went on to spread the ball around, finding the majority of his success targeting receiver, Eugene Lewis on a few sideline hang routes. Including a big third down conversion to Lewis late in the fourth quarter on a drive that would inevitably lead to a heartbreaking missed field goal from Montreal, sealing a loss in Week 2. 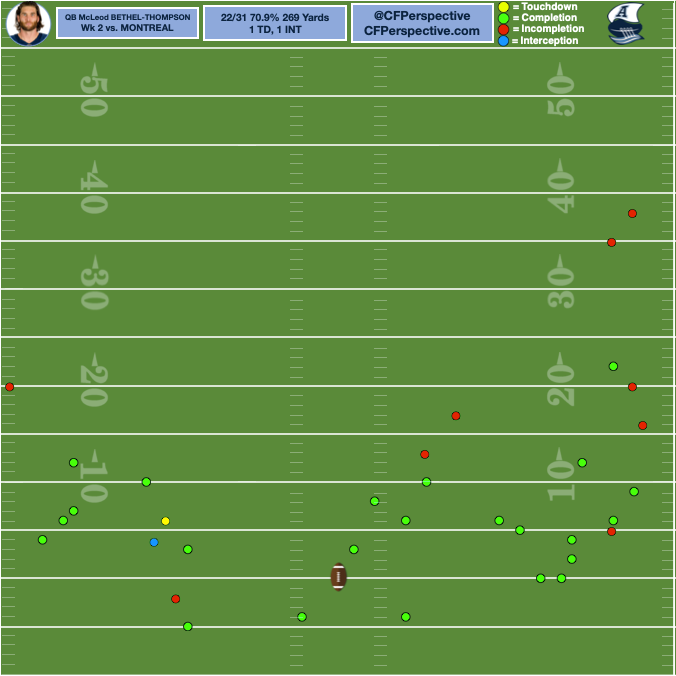 What caught me off guard in this matchup was just how much McLeod Bethel-Thompson’s chart mimicked that of Montreal’s Harris.

A majority of attempts to the intermediate right, incompletions with deep ball and reliance on 1-on-1 matchups into the boundary when the ball was on the left hash.

Perhaps the symmetry is fitting in a game that came down to a 21-yard field goal miss from Montreal, as the Argos recent run of field goal fortune (Hamilton and BC from 2021 come to mind) continues early on in 2022. 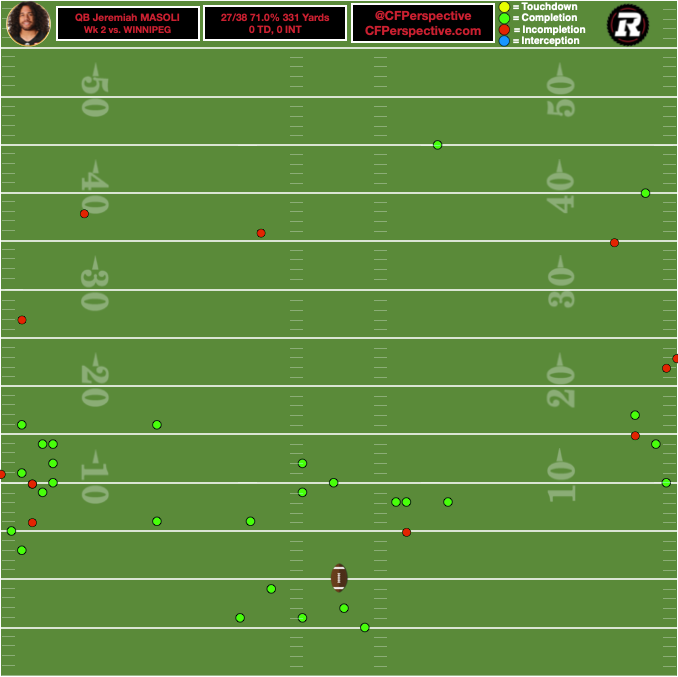 While he didn’t lead the CFL in average depth of target this week (13.1 yards per attempt to Zach Collaros’ 13.8), Masoli is the only CFL passer to eclipse more than 11-yards per attempt in each of his first two games played this season.

The aggressive downfield passing attack seems to be here to stay for Ottawa. Receiver, Jaelon Acklin continues to carve out his place amongst the best pass catchers in the game. 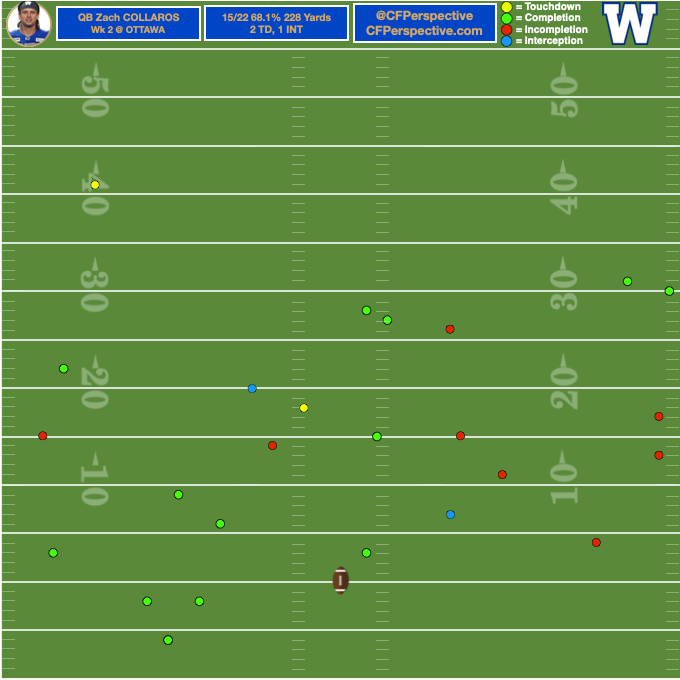 As mentioned, Collaros led the CFL in yards per attempt in Week 2, and did so on just 22 attempts, a CFL low. Collaros was effective down the middle of the field and found receiver, Greg Ellingson in the end zone for a second straight week.

The one pass beyond 30-yards he attempted was the back breaker to rookie receiver, Dalton Schoen. Who has quickly adapted to the Bombers passing game alongside Ellingson, Demski and Rasheed Bailey, who returned late to the game Friday in Ottawa after being forced to leave the game early on. 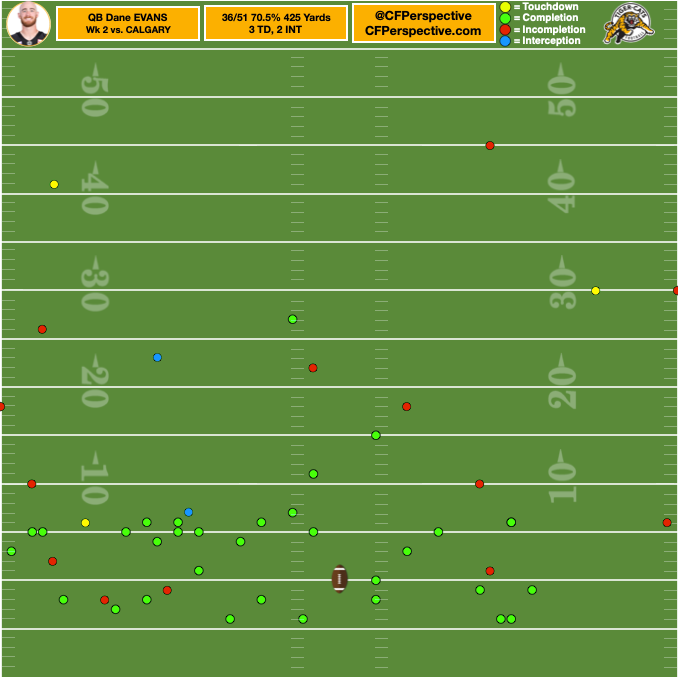 On a week where his first born arrived, Evans was undoubtedly working off minimal sleep. After the first two quarters, it appeared as though the 2022 Ticats home opener would go down as an all-time great memory for the Black and Gold quarterback, who took a decisive lead into halftime while displaying complete control of the offence.

As we know, in parenting and in football, halftime is just a predetermined break, not a time to celebrate your accomplishments and lift off the throttle. The Stampeders would storm back as Evans and the Ticats offence completed just 15/27 attempts (60.0%) down the final two quarters compared to 21/27 (80.7%) in the first half. 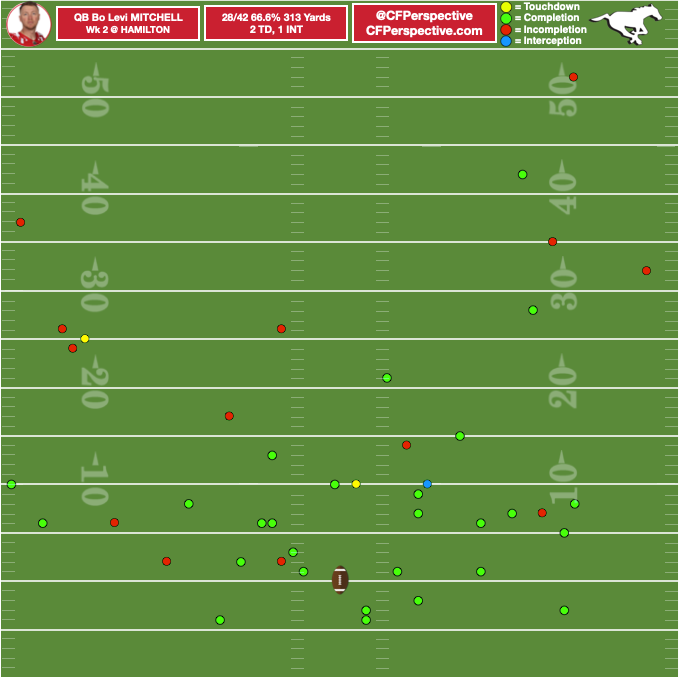 If Bo Levi Mitchell says he’s back, I believe it.

While the chart doesn’t exactly scream peak Mitchell, hitting home run after home run on deep shots, the wide swath of targets challenging all corners of the field certainly does.

His fighting spirit to swim upstream against a physical Ticats defence should be commended. Calgary now sits at 2-0 on what just as easily could, and likely should, have been an 0-2 start against the East. 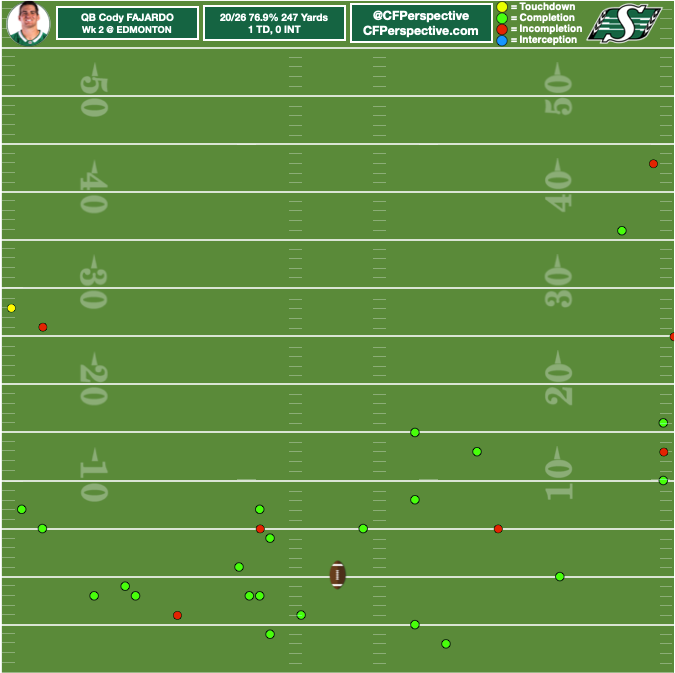 While I don’t think there are any major proclamations to be made after the first two Riders games of the season. Fajardo seems more comfortable pushing the ball down field and continues to be the games best run threat at the pivot spot.

Some decisions and throw locations still leave you wanting more, but it’s clear his game is refining with Jason Maas in charge of the offence for a second season. 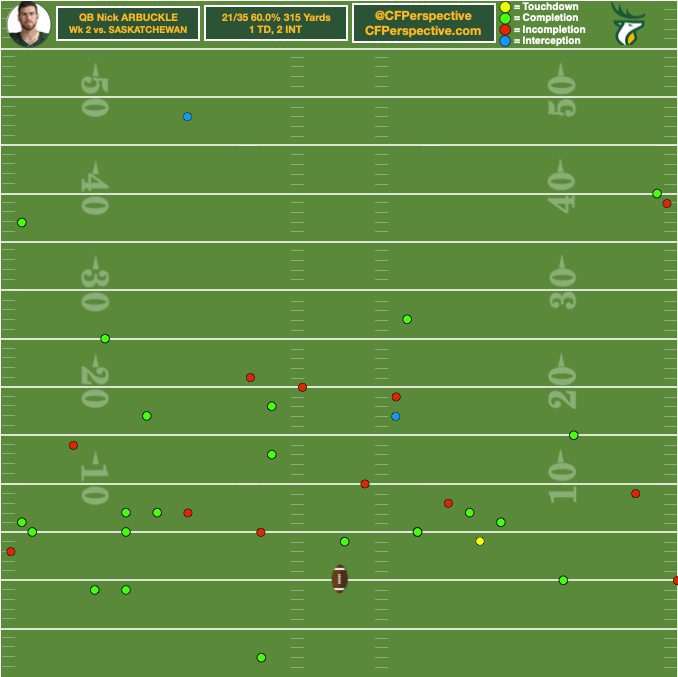 This was the first film I’ve seen of Nick Arbuckle, since his departure from Calgary, that looked like the player I remember with a substantial upside worth championing.

The footwork, release, timing with receivers (especially Kenny Lawler), and overall ability to operate the offence seemed much more natural than Week 1 in Vancouver.

With that said, the Elks are 0-2 and Chris Jones is not one play any quarterback for very long if winning doesn’t soon follow. As the leader of a group tasked to outscore the opposition, Arbuckle needs a big performance on the road this week in Calgary on Saturday night.