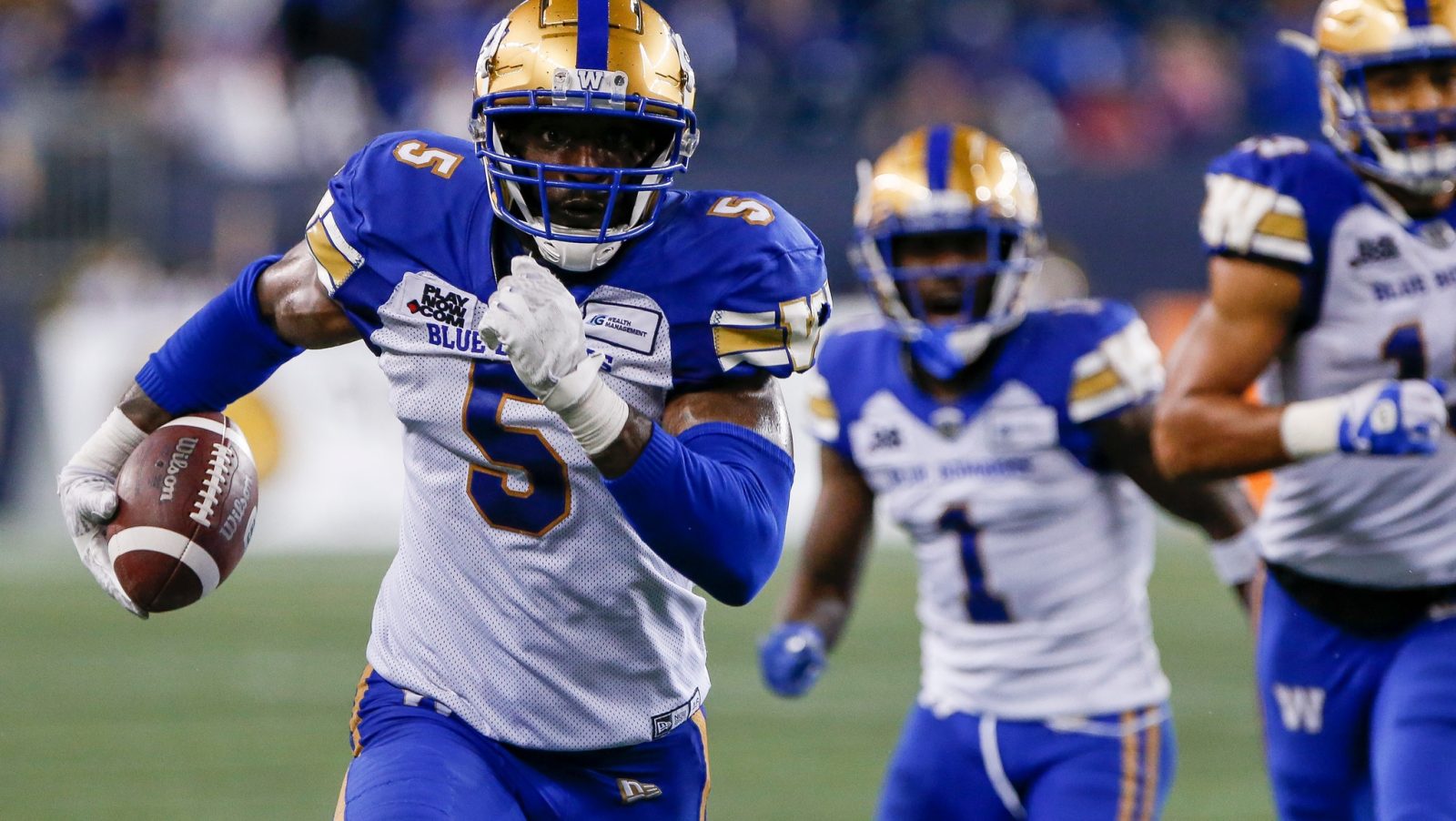 WINNIPEG — The Winnipeg Blue Bombers remained undefeated with a 26-12 win over the visiting Hamilton Tiger-Cats on Friday night in a Grey Cup rematch at IG Field.

After a lengthy weather delay, the two-time defending champion Bombers (3-0) stepped up in all three phases to win the first game between the two teams since the 108th Grey Cup last December. Winnipeg has now won 11 straight at home, while Hamilton has lost three straight to start the season.

Winnipeg pass rusher Willie Jefferson made a big impact with a 30-yard pick-six in the fourth quarter, while quarterback Zach Collaros completed 21 of 32 passes for 302 yards with one interception.

Bombers receiver Nic Demski had 96 yards on six catches before exiting the game early in the third quarter with an injury. Hometown running back Brady Oliveira led Winnipeg on the ground with 56 yards and a touchdown on 15 carries.

Hamilton quarterback Dane Evans completed 25 of 42 passes for 237 yards and two interceptions in the loss, while receiver Tim White led the team with 78 yards on six catches.

The Bombers started strong out of the gate with Collaros completing a 46-yard pass to leading receiver Greg Ellingson on their first offensive play of the game. Hamilton’s defence held strong from there, but the field position was good enough for Marc Liegghio to make a 45-yard field goal for the early lead.

Collaros kept things rolling on the team’s next drive with a 35-yard connection to receiver Rasheed Bailey, but a big sack from Ticats defensive end Julian Howsare led to the Bombers settling for a 30-yard field goal from Liegghio to go up 6-0.

Hamilton’s offence responded with a solid drive that saw Evans complete a 41-yard strike to David Ungerer III before nearly connecting with Steven Dunbar Jr. for a touchdown a play later. Dunbar was unable to secure the catch in the end zone, leading to Michael Domagala kicking a 27-yard field goal to put the Ticats on the board near the end of the first quarter

Domagala tied the game early in the second quarter with a 49-yard field goal that was set up by a 22-yard catch from White. But Winnipeg regained the lead on the next drive when Liegghio’s 48-yard punt went out of bounds in the end zone for a single.

Domagala missed a 56-yard field goal on the ensuing drive, but Hamilton’s defence managed to generate a much-needed spark one play later with the Bombers backed up near their goal line. Defensive back Richard Leonard intercepted Collaros at the Winnipeg 27-yard line, which led to a 32-yard field goal from Domagala to give the Ticats a 9-7 lead with under three minutes left in the first half.

But Collaros helped put Winnipeg back on top just two drives later, as he found Demski deep down the field for a 40-yard completion to set up first-and-goal at Hamilton’s goal line. Collaros stood strong under pressure to get the ball to Demski, who beat Tunde Adeleke in tight coverage to make the incredible grab.

Oliveira punched in the one-yard touchdown on the next play, and Liegghio kicked the extra point to give Winnipeg a 14-9 lead entering halftime.

The Bombers lost Demski early in the third quarter, but they managed to add to their lead with a single on a Liegghio punt and a 41-yard field goal from Liegghio on back-to-back drives. Collaros completed four straight passes to help set up the field goal.

Hamilton missed another field goal attempt later in the quarter as Simon Laryea kicked a 51-yard attempt wide to the left.

Momentum remained on Winnipeg’s side in the fourth quarter as Jefferson sacked Evans to force a punt. Jefferson made the home crowd get even louder on the next Hamilton possession when he intercepted a deflected Evans pass and returned it 30 yards for a touchdown. Liegghio added the extra point to give Winnipeg a commanding 25-9 lead.

The Ticats cut into the lead with just over five minutes remaining on a 41-yard field goal from Domagala, but that was as close as they would get. Winnipeg took the 26-12 lead when Hamilton conceded a single on a Liegghio punt with under three minutes to play.

Week 4 will see Hamilton host the Edmonton Elks for a Canada Day game next Friday at 7:30 p.m. ET, while Winnipeg will next face the Argonauts in Toronto on Monday, July 4 at 7:30 p.m. ET.