Cauz: The Rourke critique that everyone’s afraid to give

Cauz: The Rourke critique that everyone’s afraid to give

“We can’t have anyone freak out out there, OK? We’ve got to keep our composure!”

I was thinking about that line while watching the BC Lions destroy the Toronto Argonauts on Saturday night and I was not referring to the Argos’ secondary. I’m talking about the biggest sensation in the CFL, quarterback Nathan Rourke.

One week he is setting the Canadian quarterback record for completion percentage in a single game and then the next time we see him he’s topping Gerry Dattilio’s record for most passing yards in a game. I’m going to start calling Nathan ‘Empire Strikes Back’ because the sequel was even better than his first game of the year. I was so excited watching the poise and production from a kid making just his fourth career start that I wasn’t even angry that my favourite team was losing by a ka-billion.

The problem is that it feels like collectively the entire Canadian football community is freaking out about Rourke. This amount of hype can’t be good for such a young player, can it?  We in the media, myself included, are guilty of blowing up a player too soon. The expectations get way too high, which can lead to unwarranted levels of disappointment when the natural regression kicks in. It’s not just people like me who want to run to the top of a mountain and scream, “I love Nathan Rourke!”

The last Canadian quarterback to do some damage in this league, Brandon Bridge recently tweeted this out during the game:

That boy @nathan_rourke is a problem. Early but I’m callin it. MOP within 2-3 years. @CFLonTSN @CFL

Well, it’s time for some balance in all of the reporting on this Victoria, BC-born, Oakville, Ont.-raised golden Canadian who is going to win the 2022 Lou Marsh by collecting every first-place vote…damn, I’m doing it again! Now that I have all of that out of my system, let’s take a real look at this supposed up-and-coming quarterback and expose all the warts that the mainstream media is too afraid to reveal.

Not to nit-pick, but Rourke and the entire Lions’ offence failed to crack the 50-point margin after going off for 59 in their season opening win over the Edmonton Elks. Is that an unfair point considering they only punted twice and racked up nearly 600 yards of offence and held on to the ball for over 40 minutes despite losing some key offensive personnel during the game? No, no it is not.

Further, it should be pointed out that Rourke had six incompletions on Saturday. Now that may seem like a ridiculously low number but what if I told you that figure is double the amount he had back in Week 1? By my math he will have a dozen incomplete passes next week against the Ottawa REDBLACKS, 24 the week after and if my math is correct (spoiler: it isn’t) he’ll be throwing incompletions by the 1000s come Labour Day.

Suddenly the “Next Russ Jackson” doesn’t look so good, does he?

While football people and fans will look at 436 yards and four touchdowns against Toronto as an impressive day, I say your eyes are blind to all the rampant failure being committed by the Lions at BC Place. Let’s take a look at Nathan’s six incompletions.

Some would say Rourke connecting on his first seven passes without a misfire until 4:19 left in the first quarter is a sign of excellent quarterbacking; I say what a boring athlete. I mean, where is the sense of mystery if the guy is successful every time he launches a pass? Where is the variety? Mix up a couple under throws just to keep us guessing.

His first incompletion was the result of all-star Ja’Gared Davis knocking down a potential screen pass. Hey, no shame in that happening against one of the league’s best defensive linemen, right? Wrong! Doug Flutie would have used his special powers of telekinesis to keep Davis firmly on the ground. So that’s a big strike on the second-year quarterback. 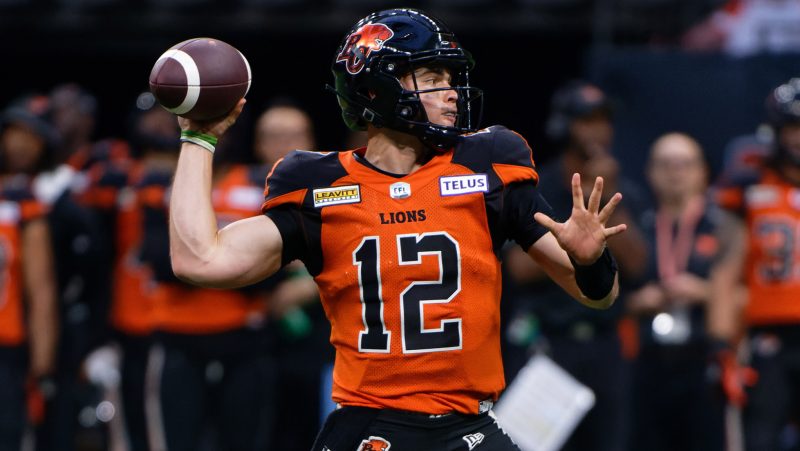 Canada’s greatest resource beyond our freshwater lakes? Sure, but Nathan Rourke IS making some mistakes out there (BCLions.com)

Moving ahead to just over the 10-minute mark of the second quarter, we find Rourke’s next incompletion also due to his pass being knocked down at the line of scrimmage. Memo to head coach Rick Campbell and offensive coordinator Jordan Maksymic: you can’t have a successful aerial attack if your scattershot quarterback can’t get his pass past the opposing nose tackle.

Did you know that Anthony Calvillo had 9,437 pass attempts and not one was ever knocked down by a down linemen? It’s true, you can look it up (don’t look it up, not true). On the very same Lions’ possession, Rourke is off target again as a wide-open James Butler drops the pass. I guess you could argue this one was on the Lions’ running back as the ball hit him right in the hands. Sorry, but that sounds like loser talk designed to protect Canada’s greatest resource beyond our freshwater lakes.

Rourke needed to find a way to have made that pass even more catchable. That “terrible” throw by Rourke must have motivated him because he hit Dominique Rhymes on the very next play in the end zone for a 19-yard strike. Lucky moment for Rourke. A broken clock is right twice a day.

With the Lions clinging to a 17-point lead and Rourke with a meagre 275 yards passing in under three quarters, the Lions needed their new quarterback to connect with Jevon Cottoy on first down but instead Shaq Richardson was right there to knock the pass down. You say great coverage, I say it’s time for a different Canadian quarterback. Let’s get Michael O’Connor in the game.

If we skip ahead to his Rourke’s next incompl…wait, he completed the rest of his passes as the Lions scored 21 more points to win by 41? Wow that is impressive!

That is the best I could do to try and keep my composure about the biggest story of this very young CFL season. I understand the smart thing is to remind ourselves it is only two games, that the competition will get more difficult and not every week will Rourke set another record.

He will have bad games, stinky throws and losing streaks. That is just a part of the game. But for now, his play and the play of the team around him has made it very difficult to have any other emotion beyond pure giddiness when watching him on the field. I think it’s OK if we all lose our composure a little bit…right?