Start vs Sit: Week 4’s receivers to fit any budget 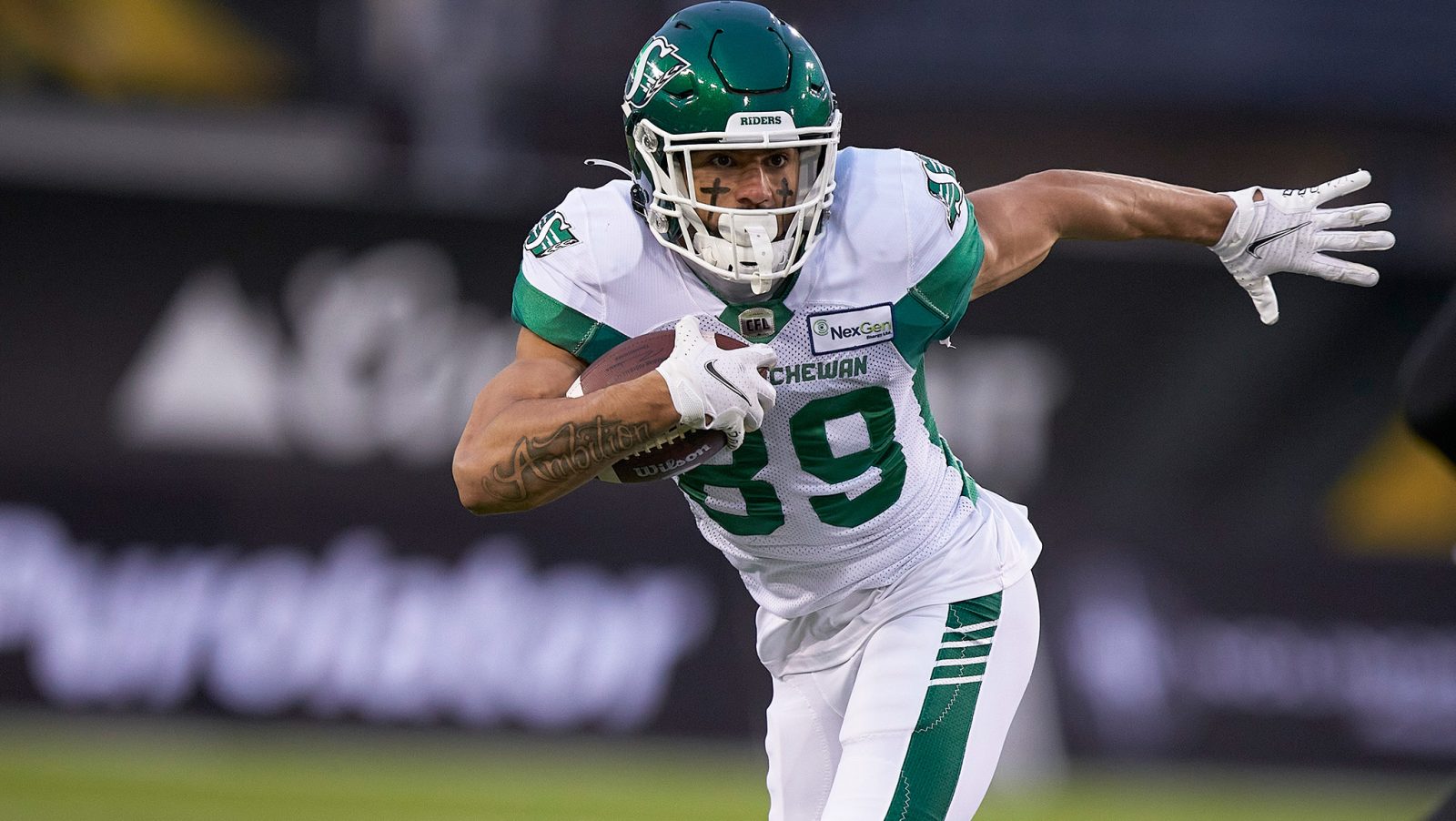 Start vs Sit: Week 4’s receivers to fit any budget

The CFL record for points in a single season is 698, held by the 1994 Calgary Stampeders, who lost to the eventual Grey Cup champion BC Lions in the West Final.

While unlikely that BC will maintain its average of 56.5 points per game, Week 4 of CFL fantasy football begins with Nathan Rourke and the league’s most explosive offence hitting the road on Thursday to see just how improved Ottawa has become. Add the presence of Jeremiah Masoli, and the stage could be set for a Thursday evening game that could be pushed into Friday morning if both pivots are on point.

Week 4 also includes a Canada Day contest and a Monday evening matchup, so let’s get set for a long weekend of big plays, while also figuring out who to start and who to sit.

Value, thy name is Keon Hatcher, who has averaged 14.6 fantasy points in his first two games and could be in line for bigger numbers with Bryan Burnham ($8,920) listed on the team’s injury report.

Hatcher has caught 11 of his 12 targets and has shown the ability to cause damage after securing the ball, as 53 of his 123 receiving yards have come after the catch. There’s a reason the Lions re-signed Hatcher after Week 1, and with the promise of more targets coming his direction, he is a strong must-add to any fantasy lineup this week.

The REDBLACKS allowed just 233.5 passing yards in their first two games, but facing ball control-minded Winnipeg is an entirely different dimension compared to confronting BC these days. Ottawa did allow 9.2 yards per completion and with a defence that managed just two sacks, Thursday might be a very, very long evening in the nation’s capital.

Early signs are pointing toward Powell making his 2022 debut on Thursday, and while Powell can do wonders in keeping BC’s offence off the field, the other side of the coin is equally telling.

The Lions’ quick strike offence means the opposing team’s ground game becomes nearly extinct when attempting to overcome a multiple-touchdown deficit. While Powell can add value with his receiving skills (four consecutive seasons of at least 30 receptions), it will not be enough to compensate if Masoli is frantically flinging passes into the night sky while facing an unfavorable scoreboard. 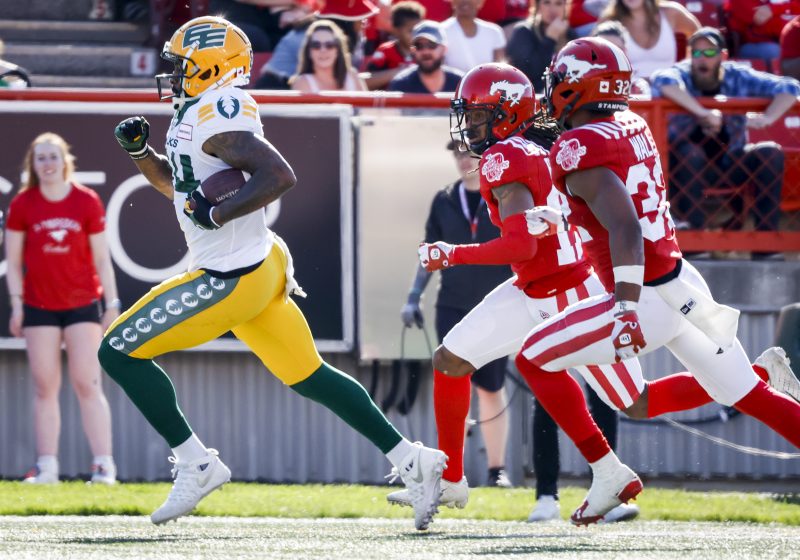 Emmanuel Arceneaux‘s eight targets against Calgary in Week 3 led all Edmonton Elks receivers for the week (The Canadian Press).

The two-time All-Star receiver has looked like the elite pass catcher he was between 2013 and 2016 and the 34-year-old has become a favorite target of Nick Arbuckle ($7,245). Arceneaux caught seven of his eight targets for 100 yards and a touchdown in the Week 3 loss to Calgary.

Arcenaux has caught all but one of his 13 targets early in the season and faces a Ticats defence allowing 308.7 yards in the air. They have also yielded a league-high eight completions of at least 30 yards. With two receptions of 30+ yards already to his credit, Arceneaux is looking for a favorable matchup that will continue his revival while also giving fantasy users a strong value play.

With the status of Don Jackson ($7,011) in question, the Tiger-Cats’ ground game has barely moved past neutral. Hamilton ranks last in the league with 132 yards in the first three weeks and have not recorded a run of better than 14 yards.

Sean Thomas Earlington ($6,594) has handled the bulk of the rushing attempts in Jackson’s absence. Maleek Irons ($2,500) has one carry, leaving the Ticats to rely on receivers Papi White ($2,948) and Tim White ($7,663) to inject some life into the ground attack. The trend is likely to continue on Friday, so there’s no need for fantasy users to look towards the Ticats backfield as you set your lineup.

It appears Shaq Evans ($5,979) will be out with a long-term injury, and while Duke Williams ($9,832) is assured his share of targets from Cody Fajardo ($10,790), it will be Schaffer-Baker who becomes a target of fantasy users in the absence of Evans.

Tied for 10th in targets (19) after the first three weeks of play, Schaffer-Baker should also see a rise in target depth as well. He comes into Week 4 averaging 9.1 yards per reception yet averaged 12.0 yards per haul last season. The Alouettes have had an impressive pass defence in the early going, but with the way they slowed down Jamal Morrow ($7,019) in last Thursday’s win, the Riders will look to emphasize the need for finding explosive plays. If so, Schaffer-Baker becomes more of a fantasy asset.

Yes, Antwi enters Week 4 as the league’s leading rusher with 172 yards, yet he’s failed to even reach 10 fantasy points in his last two games. Over the past eight quarters, Antwi has rushed 18 times for just 74 yards, averaging just 4.1 yards per carry.

Antwi may also see his time as lead back become a timeshare now that Walter Fletcher ($4,354) has a game under his belt with his new team. The former Elk had two carries for 15 yards in the Week 3 win over Saskatchewan and will be in line for more touches if Antwi continues to look more like the back he has the past two games, instead of the promising producer he appeared to be after rushing for 98 yards in Week 1.

Sure, Winnipeg doesn’t plan to put the ball in the air at will, yet when Zach Collaros ($8,814) needs a big play, he’s been turning to Ellingson, who is averaging a solid 15.6 fantasy points per game. Ellingson is also averaging 16.8 yards per catch and is one of 10 players who have two catches of better than 30 yards, all but reversing any questions as to whether he’s slowing down.

The Argos have allowed four touchdown passes in their first two games, but more telling is the fact opposing receivers have converted 64.4% of completions into first downs. That plays perfectly into the hands of Ellingson, who remains one of the league’s best at moving the chains when needed.

Bethel-Thompson put up 6.2 fantasy points in Saturday’s loss to BC and has produced just 19.9 fantasy points in his first two games. History has shown he’s much better than what we’ve seen thus far, but who wants to be the fantasy user willing to gamble on that? Especially when the Argos are facing a Blue Bombers defence that is finding its stride.

Not all of this falls on Bethel-Thompson’s arm. The Argos have just two completions of better than 30 yards and have yet to have a receiver break out and establish themselves as the No.1. Kurleigh Gittens, Jr. ($6,725) leads the team with 11 targets while Brandon Banks ($6,581) and DaVaris Daniels ($6,625) have 10 targets each. Until someone can be a reliable option for Bethel-Thompson, expect consistent inconsistency.