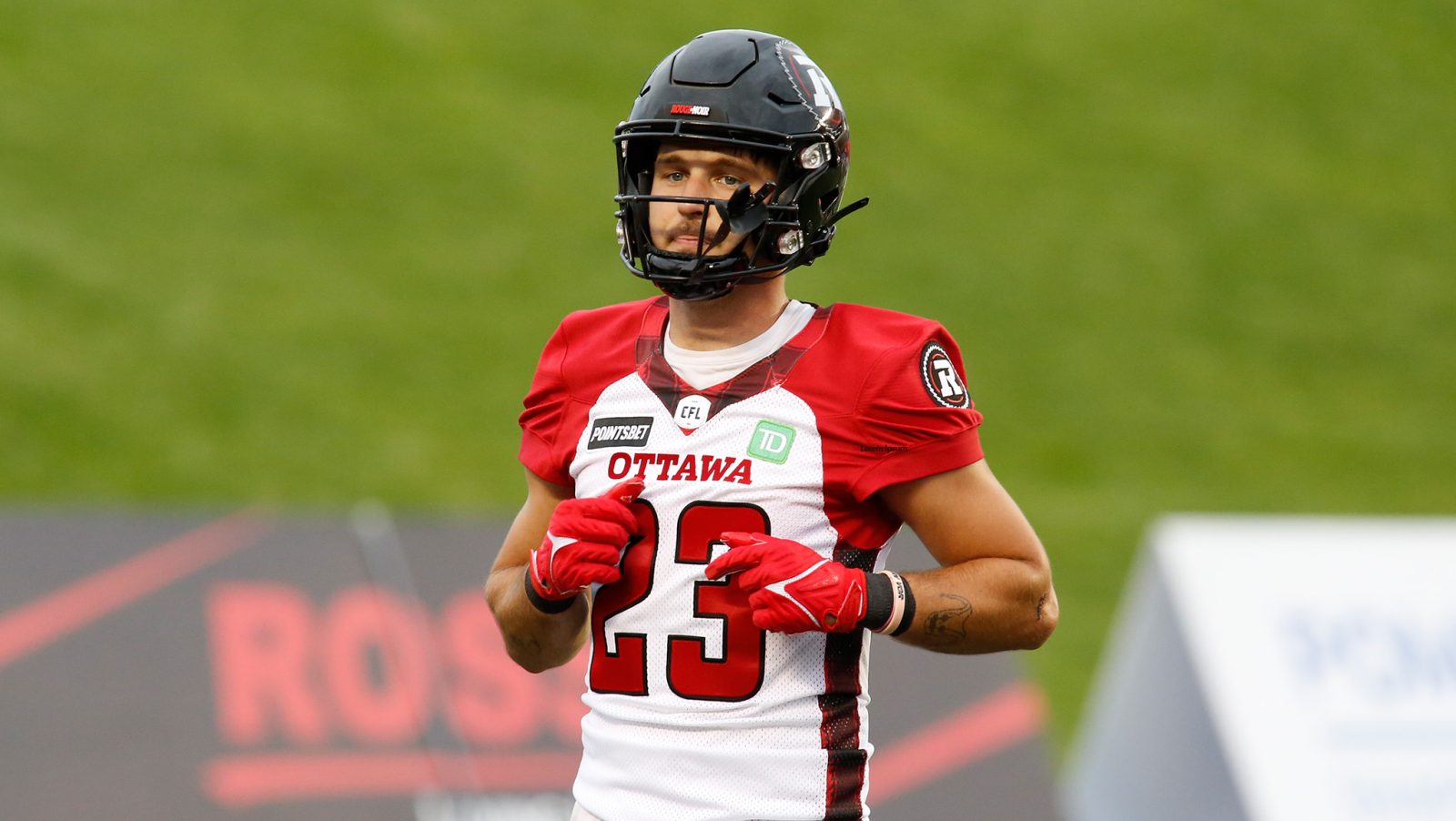 Just imagine if Jaelon Acklin had opened the 2022 season perfectly.

The first-year Ottawa REDBLACKS receiver is enjoying a hot start to the year – one mulligan aside – and an alteration in his deployment under a new coaching staff as well as an already built-in chemistry with quarterback Jeremiah Masoli are primarily the reasons why.

The ceiling is high for Acklin, and so are the expectations. But the 26-year-old doesn’t seem to be thinking about personal milestones in the least as he plays in his third CFL season. 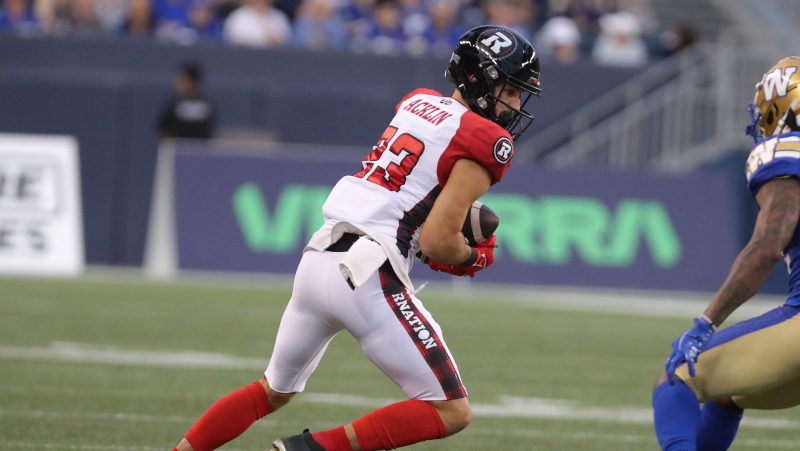 Jaelon Acklin is averaging 16.9 yards per catch to start the season with the Ottawa REDBLACKS, the longest average of his career (The Canadian Press).

“I just wanna put our team in a position to win,” said Acklin shortly after he and the REDBLACKS finished a practice day ahead of Thursday night’s game against the visiting BC Lions. “I know that sounds corny. I’m just here to win a championship. I could care less about personal accolades. I feel if I help us win a championship, the personal accolades will come with it.”

Acklin has pulled in 13 catches for 220 yards, making him the fourth-leading receiver in the league, yardage-wise, with the three players above him all having three games under their belts to Acklin’s two. In receptions, Acklin stands 11th, with everyone above him in the top 10 – aside from BC’s Lucky Whitehead – having an extra game to their benefit.

If he’s impressed with himself, he doesn’t show it by bragging. Far from it. When the possibility of big stats in 2022 is presented to him, he waves off a pat on the back, pointing out that his numbers should be better.

“If I catch that first ball that was thrown to me, the post, I’d probably have, like, three hundred yards and we’re one and one,” said Acklin.

Acklin is referring to a perfectly-thrown ball from Masoli during the first game of the season. It was a pretty pass and it landed right in Acklin’s hands, while he was in full stride behind coverage, as he reached the Winnipeg 33-yard line.

A likely touchdown, it would have, mathematically, given the REDBLACKS a win in what turned out to be a 19-17 loss. And it would have been an 80-yarder, so Acklin’s right. He’d be at 300 receiving yards, just seven yards behind the league leader, Montreal’s Eugene Lewis, with a game in hand.

“I don’t know what happened,” said Acklin, sounding puzzled as he re-lived the memory. “I don’t think I’ve ever done that before. I don’t ever want to feel like that again. I felt like I let the team down.” 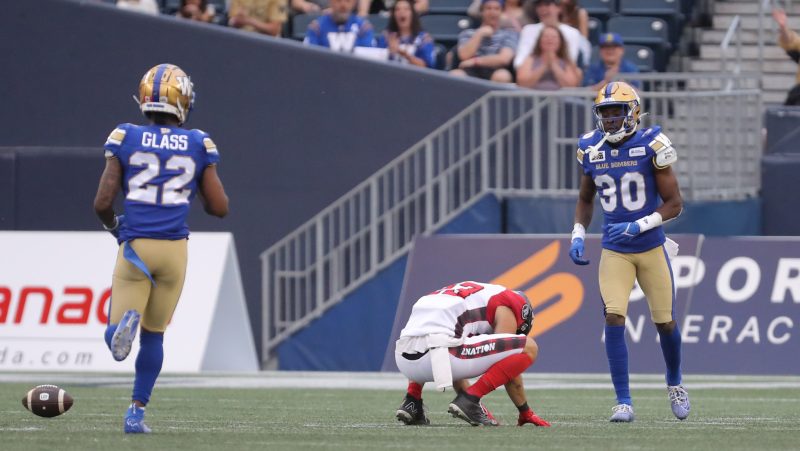 Acklin leads all REDBLACKS receivers in receptions, targets, yardage and average yards per catch to open the season for Ottawa (The Canadian Press).

During Ottawa’s off-season shopping spree of free agents, both Masoli and Acklin left the Hamilton Ticats behind and headed for the nation’s capital. Masoli’s presence has helped Acklin keep a comfortable feeling of familiarity while he relishes the fresh challenges inherent in joining a new organization.

“It’s been kinda nice, stepping out of my comfort zone and going to a new place, learning a new offence and still getting to play with Jeremiah,” said Acklin. “So, it’s cool.”

In his first two seasons in Hamilton, Acklin emerged as a clutch receiver, pulling in 58 catches for 708 yards in 2019 and 50 for 678 in 2021, even while being employed more often as a blocker than he has been, so far, with Ottawa.

That deployment change is one factor that has led to Acklin’s early numbers being such that you can easily see him being in line for the first thousand-yard season of his career.

“That’s kinda the difference,” Acklin said of his role with Ottawa in comparison to the one he played in Hamilton. Then he adds that he’d be fine if Head Coach and Offensive Coordinator Paul LaPolice were to alter the schemes to make him less a target and more a protector. “I like blocking,” he said. “If Ottawa asks me to block, I’ll block. But right now, we’ve got Darvin and Nate who are very good blockers.”

Acklin raves about veteran receiver Nate Behar and about Darvin Adams, the former Winnipeg Blue Bomber star who, like Acklin, signed on with Ottawa as a free agent this past winter. “I’ve learned a lot form Darvin,” Acklin said, adding that he watched a lot of tape from Adams’
days in Winnipeg when LaPolice was the offensive coordinator there. He says he’s picked up a lot on the perfecting of route-running from Adams.

There is plenty of optimism afoot in Ottawa, despite the fact that the REDBLACKS have opened the season with two straight losses. Those two losses, after all, came at the hands of the two-time defending champions. The REDBLACKS made those games each very tight, and since they could conceivably have split them or even won both of them, they come off the bye week full of beans, but knowing that the offence needs to be more complete in order to start stacking wins.

“We’re coming together fast,” said Acklin before touching on the necessary improvements the REDBLACKS’ offence needs to make.

“We’ve just gotta finish drives,” he explained. “We’re all seeing the talent that we have. We’re executing until we get into the score zone.
We’re not having any two-and-outs, but we’ve gotta get to where we’re finishing drives, actually scoring touchdowns.”

“There is optimism but there’s not too much optimism,” the native of Mountain View, MO added. “Because we’ve gotta figure that stuff out or we’re gonna end up .500 and second, third place in the East. And we’re not trying to just make the playoffs. We’re trying to achieve the ultimate goal.” 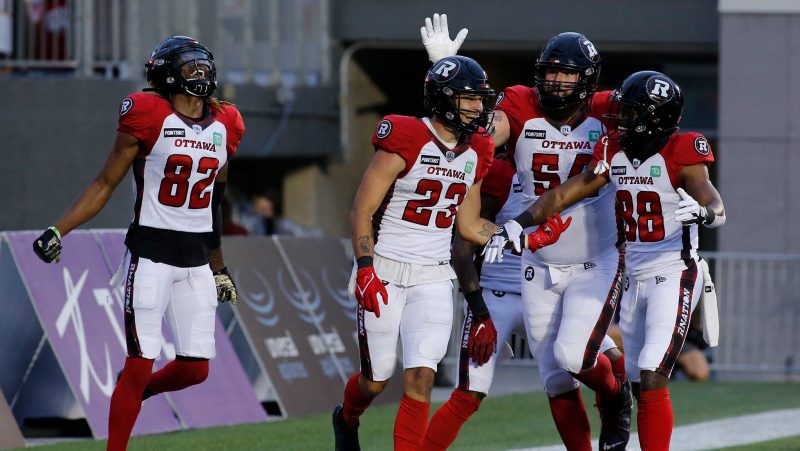 Just two games into the season, Acklin is just 458 yards away from tying his 2021 yardage total of 678 (The Canadian Press).

There is more than just a whiff of possibility in the atmosphere around the REDBLACKS and Acklin thinks it’s crucial that every Ottawa player digs in hard so that the team’s early season promise is converted to success. “We’re trying to demand perfection out of everyone. Even though we’re not going to get it we’re still gonna try and demand it.”

Most notably, Acklin will demand it of himself and that is why, almost three weeks later, he is still nagged by that first game drop. As he should be, he figures.

“If it wasn’t bugging me, there’d probably be a problem,” he said. “Whenever it bugs me, I’ve gotta learn from it, because I know that I can’t change it. All I can do is go out here and make more plays. And if we win the Grey Cup at the end of the year, no one’s gonna come up to me and say ‘but you dropped that pass.’”

“I’m out here to be the best that I can be, and whenever you’re trying to be the best, you’re gonna fail (occasionally). It’s just about how you react to it.”

In piling up the early season receptions and yards after that first missed opportunity, Acklin’s reaction seems to have been just fine.

ACKLIN’S MOM WILL GET A TOUR BUT SHE’D REALLY LIKE A WIN, TOO, PLEASE

Acklin’s mother, Tina, will be in attendance at Thursday night’s game but it did take some arm-twisting from her son, who can’t wait to show her the city of Ottawa.

“The last few times she came up we’ve lost and she hates seeing me lose,” Acklin said with a chuckle. “She was kinda nervous about coming up but I was like ‘mom, come up. You’ll have a good time.’”

“I want to show her Ottawa, ‘cause it’s a neat city,” said Acklin, who is loving life in the National Capital Region, living across the river in Quebec.

On the mother-son itinerary is a trip to Parliament Hill. “She’ll think that’s cool,” said Acklin.

Two of his four brothers, Jaris and Jentry, will be at Thursday night’s game as well and Acklin is looking forward to showing them around.
“This’ll be their first time in Canada,” he said.