O’Leary: A perfect Canada Day for the CFL

O’Leary: A perfect Canada Day for the CFL

It hit me shortly after Tre Ford was named the Edmonton Elks’ starter on Thursday afternoon, a few hours before Nathan Rourke would take the field for the BC Lions.

We have two young Canadian quarterbacks with what feels like a ton of opportunity in front of them right now and both are getting their shot at the perfect time. In a league that’s so rich in history, I’m always hesitant to declare anything the best or most ever, so I’ll phrase it this way: This feels like the most significant Canada Day weekend I’ve seen in my time around the CFL.

Sure, there have been great games on this weekend, great individual performances (shoutout to S.J. Green‘s one-handed, diving TD in the Riders end zone in 2010), but I can’t think of a time that I’ve seen so much emphasis on Canadian quarterbacks (multiple!) that lines up exactly with the country’s birthday.

Let’s start with Nathan Rourke, whose letters in his name are already starting to get worn out on my keyboard. It appears that the honeymoon portion of Rourke’s time as a starter — two magnificent, near flawless performances against Edmonton and Toronto — has come to an end. The 24-year-old may not have fully come back down to Earth in his performance on Thursday night in Ottawa, but his feet came closer to the ground than they have in his three games this year.

The interceptions were the first he threw this season, as Money Hunter (best name in the CFL?) picked off Rourke twice, then forced a fumble out of bounds and created a turnover off him in an exceptional defensive performance.

After two weeks of all ups, it was important to see how Rourke would respond to some of the in-game downs that anyone will encounter through the 60 minutes of a game. He responded perfectly. After his interceptions led to Ottawa touchdowns and the Lions’ first deficit of the season, Rourke went back out and found Keon Hatcher for a 71-yard touchdown. The Lions went up on Sean Whyte‘s convert and didn’t trail again.

“It shows that he’s actually human,” Lions’ head coach and co-GM Rick Campbell said after the game of Rourke.

Let’s pause here to absorb that this is legitimately part of the narrative around Rourke right now. He’s played that well. With the Lions at 3-0 after a gritty win over the REDBLACKS, we can start to look ahead to them hosting the Blue Bombers in Week 5. It should be a fantastic measuring stick for this Lions team. 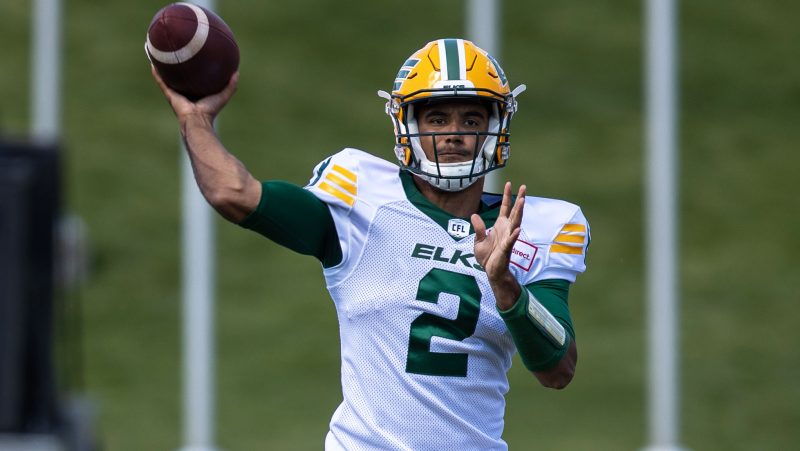 The eighth overall pick in this year’s CFL Draft, QB Tre Ford gets the start for Edmonton tonight in Hamilton (GoElks.com)

Tonight, Ford gets to take his shot at running the offensive show for the Elks. Put the Canada Day game for a Canadian QB storyline aside for a second and you’ve got an even more perfect homecoming for Ford, who starred at Waterloo, winning the Hec Crighton trophy in 2021 as the top U SPORTS football player in the country. When the Elks took him eighth overall in this year’s CFL Draft, it was the highest a QB had been taken in 42 years (Sheldon Paris, seventh overall, Calgary 1980).

Ford is from nearby Niagara Falls and will no doubt have a ton of friends, family, former teammates, old neighbours, etc. in the stands rooting for him.

“Hamilton’s in a cool spot because it’s kind of in the middle between Waterloo and Niagara Falls,” Ford told Postmedia on Thursday. “So, I’ve got some people from my university coming here, some people from home coming up. It’s in a pretty cool location, so I’m excited for it.”

In a comfortable neck of the woods with a smattering of supporters in an otherwise hostile crowd, Ford couldn’t ask for a better place or a better time to get his first-ever CFL start. After decades of fans waiting for a Canadian player to step up and become a fixture in the league at the most talked about position in the game, it feels like waiting and hoping might be shifting to reality.

That we’re afforded the opportunity to mix that in with red-and-white sheet cake, parades and fireworks ties it all together nicely, doesn’t it?