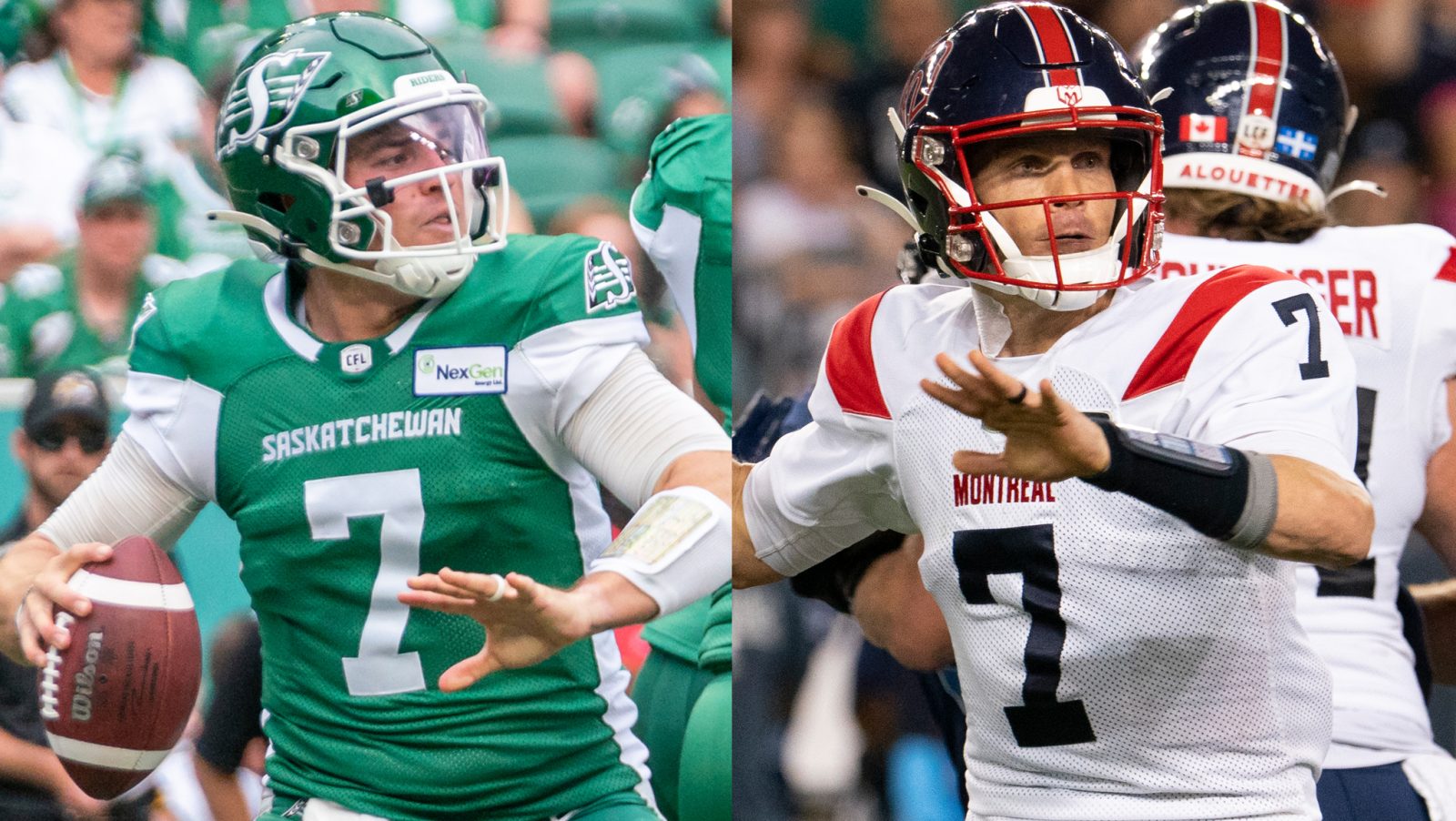 REGINA — The Montreal Alouettes picked up their first win of the season in Week 3 with a 37-13 victory over the Saskatchewan Roughriders. On Saturday night the two will meet again, this time in Saskatchewan at Mosaic Stadium.

It was the Als’ defence that stood out in Week 3 as they recorded eight sacks and three interceptions.

The Roughriders offensive line will need to protect quarterback Cody Fajardo against defensive lineman Michael Wakefield and linebacker Brian Harelimana, as the pair had two sacks each a week ago.

Harelimana says the Als defence takes a lot of pride in getting to opposing quarterbacks.

“We have high expectations for ourselves,” Harelimana told montrealalouettes.com post-game. “We have a defensive front that’s tough to deal with. We have to find a way to get to the quarterback during games and we were able to capitalize on that today. We have to build on that in the coming weeks.”

The defence has taken a hit as they will be without defensive tackle Almondo Sewell who is not listed on their game day depth chart. Sewell also had two sacks against the Riders last week.

If Fajardo wants to go to the air, he’ll have to respect the playmaking ability of defensive backs Mike Jones, Marc-Antoine Dequoy and Darius Williams. The trio each picked off a Fajardo pass the first time around.

On the topic of turnovers, the Als didn’t have one in the win. Quarterback Trevor Harris was 16-22 for 262 yards and a touchdown. He connected with receiver Kaion Julien-Grant for the touchdown. Julien-Grant caught a pair of passes for 75 yards.

If Harris can take care of the ball yet again, it will go a long way in deciding the outcome. He knows he can turn to wide receiver Eugene Lewis to make plays as Lewis leads the CFL with 307 receiving yards.

Special teams played a factor in the first matchup with Chandler Worthy returning an opening kickoff 88 yards for a touchdown. He also averaged 18.6 yards per punt return. Giving his offence strong field position to start drives will help ease the load on Harris.

Fajardo and his offence are looking for a bounce back performance in Week 4. The Riders pivot went 17-28 for 191 yards and threw two interceptions. If the offensive line of Terran Vaughn, Logan Ferland, Logan Bandy, Evan Johnson and Na’Ty Rodgers can give Fajardo more time in the pocket it will help in putting points on the board.

The Riders are hoping to see the Jamal Morrow they saw in Week 2 when he rushed for 126 yards on seven carries. Morrow and Frankie Hickson will split the carries on Saturday night.

Dickenson wants to see more production out of his running back duo.

“We have to get first downs,” Dickenson told riderville.com. “If we can’t get them running the ball, we’ll throw it. But we would like to run the ball. One of our pillars of success is running the football on offence and stopping it on defence.”

The offence will need to perform without one of their biggest receiving weapons as Shaq Evans will miss the game after sustaining an ankle injury in the Week 3 defeat.

Luckily for the Riders, they don’t lack options at wideout. D’haquille Williams stepped up with four receptions and 101 yards against the Als last week. Kian Schaffer-Baker and Mitchell Picton remain viable options in the air.

Defensive lineman Pete Robertson sacked Harris twice in Week 3, giving him five on the season. The Riders have been the best team when it comes to getting to the opposing quarterbacks as they have 15 sacks in three games. Getting to Harris will be critical in keeping the Als off the board.

When Harris gets the ball in the air, receivers will be met by playmakers in linebacker Derrick Moncrief, safety Mike Edem and defensive back Nick Marshall. Moncrief has two interceptions, while Edem and Marshall each have one apiece.

Dickenson is looking for his defence to stick to their approach and limit big plays, which was a focus in practice this week.

“We talk about playing our technique,” Dickenson told riderville.com. “We gave up on defence two big plays, the touchdown to Julien-Grant and the bubble screen to one of the Philpot brothers. We’re trying to make sure with our defensive backs that when we play man, we want to try and get hands on early.”

The Als are attempting to even their record at 2-2 with their first road win of the year on Saturday night. The Riders are looking to keep pace in what’s turning out to be a juggernaut of a West Division.

The game can be seen on TSN, RDS and ESPN2 and can be followed along on CFL.ca’s Game Tracker.