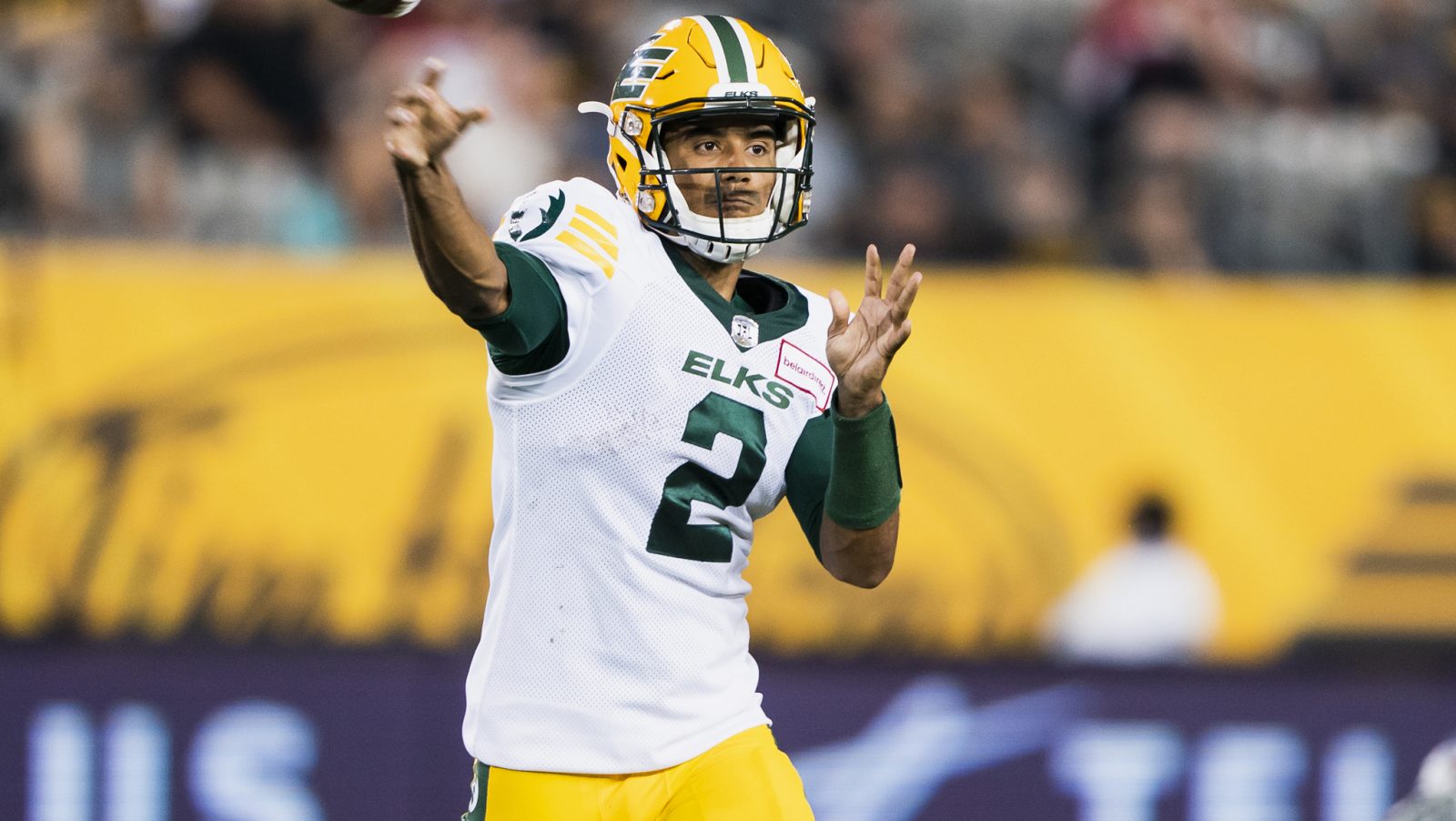 The Edmonton Elks had been building to their first win all season. After a not-so-great start to 2022 in BC, the Elks have taken incremental steps each week since and it all culminated with Friday’s thrilling comeback in Hamilton. It was a much-needed win for Edmonton and gives them something to build on going into a Week 5 rematch with Calgary.

I really like how the Elks stuck with it on Canada Day. On the road and sitting at 0-3, Edmonton trailed 19-9 at halftime and 22-15 after three quarters, but still found a way to get it done. They made three huge defensive plays in the final 17 minutes, including Scott Hutter’s forced fumble recovered by Jalen Collins for the game winning score. It was a gutsy, resilient effort against a quality opponent, despite their record.

Kenny Lawler continues to validate Edmonton and the huge splash they made on him in free agency. Despite going for “only” 43 receiving yards on Friday, Lawler reeled in all four of his targets in automatic fashion and caught a huge fourth quarter touchdown to kick the Elks comeback into high gear.

And then there’s quarterback Tre Ford. The 2022 first round pick did something rare to begin with by making the jump from U SPORTS to the CFL in short order. But for Ford to show the poise and composure we saw in the fourth quarter to lead Edmonton all the way back was another story completely. That was big game stuff.

It was Ford’s first professional start, so there were raw moments, which is to be expected. As he becomes more comfortable with his offensive line, I’d like to see Ford stay in the pocket a little longer and really let his impressive arm skills go to work. That comes with time and reps, though, and I’m excited to see how chemistry builds with a talented group of receivers.

That said, Ford’s ability to run the ball and throw on the move is an elite part of his skillset. He finished with 61 rushing yards against Hamilton on six attempts and extended plays with his scrambling ability numerous times on top of that. As we saw during his standout career at Waterloo, Ford doesn’t lose much zip in the passing game even while on the run. That was certainly evident on Friday.

At 1-3, the Elks still have lots of ground to make up in what looks like a stacked West Division. But in year one under new head coach Chris Jones, steady improvement throughout the season is the most important thing, at least from this vantage point. So far, we’ve seen just that and now Edmonton has a well-deserved first win of the season.

The Tiger-Cats are 0-4 to start a season for the first time since 2017 and have absorbed a pair of heartbreaking home losses to Edmonton and Calgary. The Ottawa REDBLACKS sit 0-3 and have been agonizingly close in all three of their losses. Both teams, and their fans, are justifiably frustrated by how the season has started. But there’s no reason to panic at this point.

Above all, the East Division is still completely wide open. With one each, only Montreal and Toronto have picked up wins in the early stages of the season. The Argos wrap up Week 4 on Monday night at home to Winnipeg with a chance to move to 2-1. If so, they’d be the East’s only team with an above .500 record. Winless teams like Hamilton and Ottawa are absolutely still in it.

Beyond just the wide-open nature of the division, though, each team has shown reasons to be optimistic. We all know this is a transitional season for the REDBLACKS, but their record doesn’t paint a very good picture of how much better they are in 2022.

Ottawa’s combined margin of defeat in three losses is just 12 points, which includes a pair of hard-fought efforts against the two-time defending Grey Cup champs. And in Week 4 against BC the REDBLACKS made life more difficult on opposing quarterback Nathan Rourke than any other team has this year. Ottawa’s defence forced a pair of interceptions and forced a Rourke fumble in a 34-31 loss.

Through four weeks, the REDBLACKS rank in the top half of the league in average yards (353.3) and passing yards (291.0). And, despite allowing 34 against the Lions on Thursday, Ottawa is averaging a respectable 24 points against per game. If Ottawa continues on the track they’re on, we’ll start to see better results.

Similarly, things aren’t as bleak as they seem in Hamilton, even with another tough-to-swallow loss against Edmonton. The Ticats rank in the top half of the league in both passing (271.3) and rushing yards (89.3) against. The same is true in passing yards for, as Hamilton ranks fourth overall at 282.3 per game.

Yes, the Tiger-Cats have blown big leads in both of their home games, but we could easily be talking about a 2-2 team here. Obviously that’s not the case, but a couple moments of better execution against the Stamps and Elks would make things look significantly different. Those aren’t impossible things to fix.

There’s room in professional football for moral victories and “the process.” In the end, though, it’s a results-oriented business. Neither Hamilton nor Ottawa have delivered so far, but there’s plenty to suggest both teams are better than their combined 0-7 records suggest. Let’s see how these two teams stick with it.

Nathan Rourke does something, or multiple things, every week that just make you say “wow.” In BC’s Week 4 win over Ottawa, it was what he did running the ball. Rourke looked like Lucky Whitehead or Keon Hatcher with how he tiptoed the line in full stride during his 50-yard touchdown run in the first quarter.

And Rourke stole a page out of James Butler’s book when he made defenders miss on a 13-yard run in the fourth quarter. It was so good I keep forgetting Rourke actually fumbled and turned the ball over on the play. Rourke is special, friends, and he keeps giving us new reasons why each week.

Finally, that was a nice bounce back from the Riders on Saturday as they paid Montreal back with a 41-20 win at Mosaic. Cody Fajardo was strong and Jamal Morrow was dynamic all night, but it was the defensive effort that really stood out.

We knew Saskatchewan’s defensive line was going to be a problem for opposing teams this year, but it might be more dangerous than anticipated. Anthony Lanier, Pete Robertson, and A.C. Leonard combined for six sacks against the Als and had quarterback Trevor Harris under pressure all night long. Get used to hearing people talk about that front four as the season rolls along!