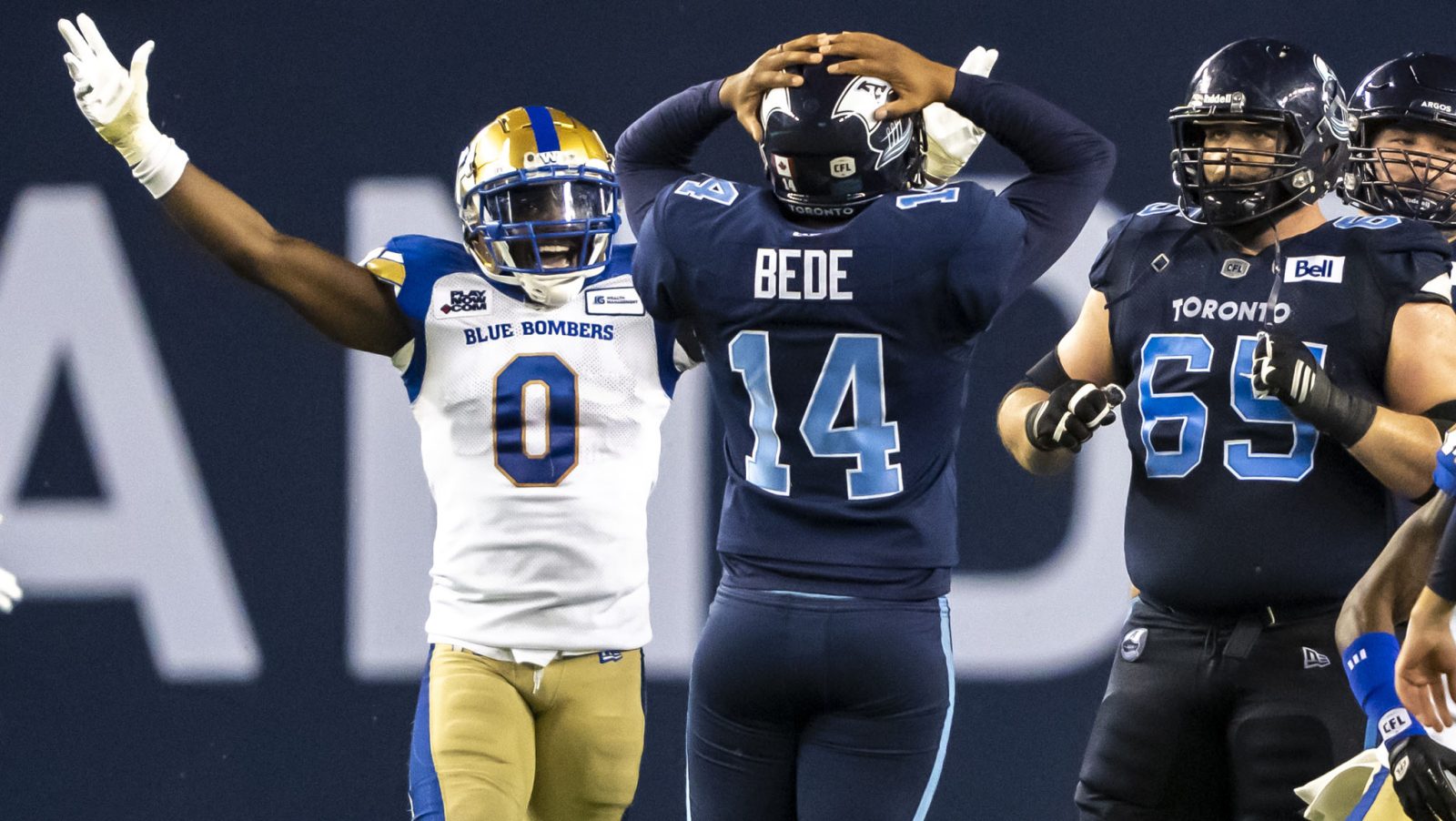 TORONTO — Those Monday night games can be a weird thing. When you’ve watched the first three games of the week and take Sunday to enjoy the tail end of the holiday weekend, you almost feel like that fourth, final game on the schedule is just one that has to happen to wrap things up.

Then you have the kind of game the Argos and Blue Bombers treated us to. It felt like it had everything: a defence showing out with a pick-six; Brandon Banks winning a wrestling match at the goal line to turn an interception into a touchdown; a fluke bounce of a would-be touchdown becoming an interception and going halfway back up the field, complete with its own drama after the fact.

The Argos’ last gasp TD drive made overtime seem like a formality. Or for maybe for a moment, the thought of Andrew Harris scoring the two-point convert for the lead against his former team had you salivating over what would have been the punchiest storyline of this young season.

We all know what happened instead.

Boris Bede’s missed point after preserved the Bombers’ perfect record, but what happened in that game and how the Bombers got the win should leave everyone with a lot of questions for both teams. That’s not necessarily reflected in these rankings, but it helps set the stage for a big one-two meeting Saturday in Vancouver.

So much for that quiet Monday night.

There were hallmarks of a Bombers’ win in Monday night’s date with the Argos. There was the Winston Rose pick-six, the tip drill teamwork that led to a TD-saving interception near the goal line. There was Zach Collaros with a tidy 25-31 passing night for 215 yards, a touchdown and an interception. Then there was that problem that reared its head against the REDBLACKS: another game with 400-plus yards of offence surrendered. Another nagging problem is the 60 rushing yards generated. Andrew Harris almost doubled that output, which no doubt had him delighted right up until the very end of the game. The Bombers escaped with the win on Monday. Now they travel across the country this week to face the 3-0 Lions on Saturday at BC Place. Safe to say the winner of this game takes No. 1 next week.

So Nathan Rourke had some actual human moments in Week 4, but the Lions persevered and improved to 3-0, winning on the road on a short week against a hungry Ottawa team. Maybe the star QB that’s the talk of the league right now was on to something when he tried to redirect some of the love that he’s been drowning in so far this season over to his teammates. They’re not bad either. The Lions’ defence frustrated Jeremiah Masoli into a 14-27, 162-yard passing night and held a dynamic offence as a whole to 253 yards. The tests only get bigger for the Lions, who host a well-travelled Bombers team on Saturday.

Does anyone else feel like the Stamps are low key sitting pretty at this early point in the season? They’ve built up a 3-0 record, Bo Levi Mitchell is fifth in the league in passing (831 yards) and has thrown four touchdowns to two interceptions. They come out of their bye week rested and head north to Edmonton to look to extend their winning streak against an Edmonton team that gave them a run two weeks ago. Getting win No. 4 without falling behind early will no doubt be something that’s discussed at length this week.

Led by a tremendous defensive effort, the Riders got the response they were after in their rematch with the Alouettes. We said here in the wake of their blowout loss in Montreal that the good teams are able to put those underwhelming performances behind them and move forward with what they know they can do. We saw that in Regina on Saturday night. A six-sack performance with two interceptions and three forced fumbles is a defensive clinic and the kind of thing teams can build a lot of wins on if they get it consistently. Kian Schaffer-Baker’s eight-catch, 90-yard and one TD showing was a blessing as Duke Williams struggled and the team settles into its tenure without Shaq Evans.

Weird that a team with an 0-3 record moves up, but things are getting weird in the East Division. This isn’t what the REDBLACKS and their fans were hoping for, staring at their worst start since the 2017 season, when they were 0-2-1 through three games. That team stumbled all the way to a 1-6-1 record before turning its season around and making the playoffs, if that’s any consolation to anyone that thought the REDBLACKS might race to the top of the East Division standings out of the gate.

The East’s overall slow start works in the REDBLACKS’ favour, but this likely won’t be a fun week for coach Paul LaPolice’s team. His offence has gone two games now without a passing touchdown. They’ll need some of that Week 1 punch they showed if they want to go into Saskatchewan and get their first win of the season this week.

One step forward for the Alouettes meets a step back in the rankings, as they lose a chance to gain some ground on their fledgling East Division rivals. The Riders bottled up Trevor Harris and the Als’ offence in the second half of Saturday’s game. A group that’s capable of leading the league in yards, first downs, points, etc. had that ground to a halt at Mosaic Stadium. There are few things worse than taking a blowout loss into a bye week. The Als, at 1-3, have plenty to think about while they wait for their July 14 date with the Edmonton Elks.

We’ll start by putting things in perspective for the Argos, who have been slightly less bad than their Eastern counterparts and despite their soul-snatching Monday night defeat, sit in first place with their 1-2 record. Perspective will be a big thing for the Argos as they head into their second bye week of this still-young season. They’ve been handed a pair of very different but difficult losses in their last two games. A win in Week 6 at the Touchdown Atlantic game could serve as a band aid for what ails the Argos. Getting on the same page will be crucial to them getting where they want to go this season.

Give the Elks this: They’re resilient. After a horrendous start – how many of those BC-type losses could a team endure in one season? – Chris Jones’ squad stayed at it, has learned and built and scratched and clawed its way into a competitive group.

Tre Ford, a rookie QB out of U SPORTS, was the team’s expected third-stringer out of camp. He went back to his familiar Golden Horseshoe stomping grounds and helped his team gut out a win over the Tiger-Cats. So often with teams that get down early in the season and drop close, winnable games like Edmonton’s prior two, the lack of that reward can break them. This one win may not change everything for this team, but they’re in a much better place than they were when they got on that plane to Hamilton on Thursday.

Speaking of teams that didn’t expect to be here at this point in the season, we reach a Ticats team that took a gutting loss at home to a previously-winless Elks squad. Dane Evans looked devastated after losing the ball on Friday night and seeing Jalen Collins scooping and scoring, turning the tables on the hometown Ticats and sending them to 0-4 on the season.

Evans’ 1,081 passing yards are a league best, but the stats get far less pretty from there. His eight interceptions lead the league, even if many of them are tipped passes, and he’s fumbled the ball away for a game-changing TD twice now. Helped by the slow starts of the teams around them, the Ticats’ 0-4 record isn’t as bad as it could be, but this is a group that desperately needs a win. There’s good news for both Hamilton and Ottawa on the horizon. After the Ticats’ bye week, they host the REDBLACKS on July 16.