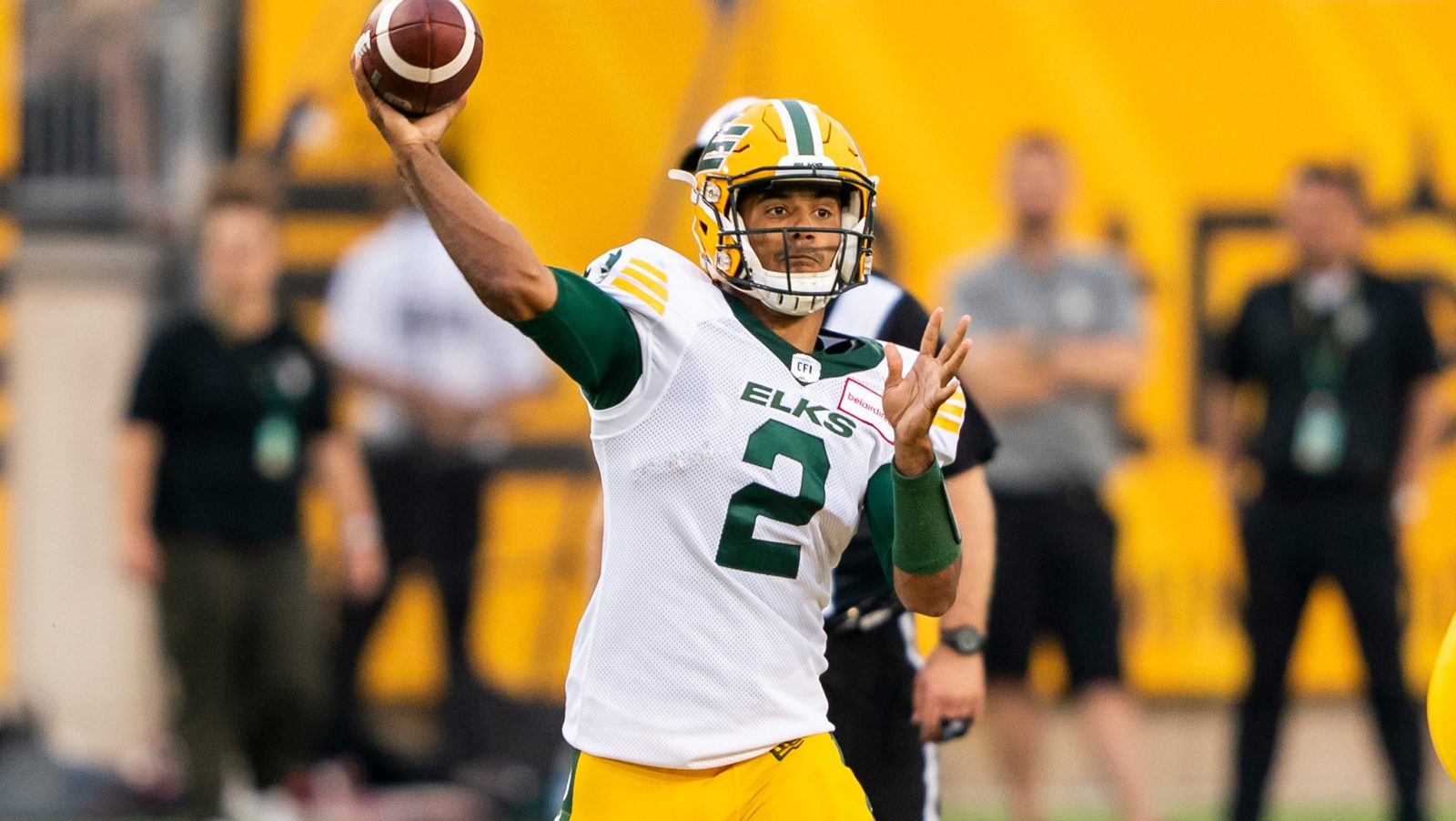 TORONTO — With an action-packed Week 4 in the rear-view mirror, there are only three games on the schedule for Week 5. But that doesn’t mean there is a shortage of storylines.

Before the Calgary Stampeders and Edmonton Elks kickoff the new week on Thursday evening, CFL.ca brings you everything you need to know in the latest edition of Checking Down.

– BC Lions receiver, Keon Hatcher has been named as one of the CFL’s Week 4 Top Performers following an impressive performance against the Ottawa REDBLACKS, which saw hatcher reel in 166 yards and a touchdown (CFL.ca).

– Quarterback, Nathan Rourke has seen a meteoric rise to start his second-year in the league. Through three games he holds the second most yardage, has the best completion percentage and has thrown the most touchdown passes, safely earning himself a place among the list of CFL Top Performers of the Month (CFL.ca).

– Ahead of their matchup with the Winnipeg Blue Bombers on Saturday, receiver Lucky Whitehead was listed on the team’s injury report as a non-participant in the first day of practice with an ankle injury (CFL.ca).

– Lions’ head coach, Rick Campbell told team media that there has been a feeling of excitement around the BC locker room approaching their Week 5 matchup with Winnipeg (BCLions.com).

– The Edmonton Elks added some depth to their receiving corps early in the week. On Tuesday, the team announced they have added receiver, Hakeem Butler to their practice roster. Butler most recently spent time in training camp with the Lions (CFL.ca)

– In the latest edition of MMQB, CFL.ca’s Pat Steinberg describes feelings of optimism surrounding the Elks and shares his thoughts on quarterback, Tre Ford‘s first career start in the CFL (CFL.ca).

– Following his Week 4 start in Hamilton, Ford tells team media how special it was to make his first career start so close to his hometown of Niagara Falls, Ontario and his alma mater, Waterloo University (GoElks.com).

– The Elks added depth to their roster on Wednesday. The team announced the addition of linebacker Tre Watson, who has appeared in four games for the Alouettes this season (CFL.ca).

– In this week’s QB Index, CFL.ca’s, Chris O’Leary outlines the appreciation and joy that Calgary Stampeders quarterback, Bo Levi Mitchell has approached the start of 2022 season with, as he looks to lead the Stamps to a 4-0 start on Thursday (CFL.ca).

– Calgary opened their week with a roster move, trading global punter, Jimmy Smith to the Saskatchewan Roughriders in exchange for a third-round pick in the 2023 global draft (Stampeders.com)

–  Approaching Thursday’s matchup with the Elks, Calgary head coach, Dave Dickenson tells Stamps media that his team is preparing for another tough game in Week 5 after the Stamps escaped with a 30-23 against Edmonton in Week 3 (Stampeders.com)

– Over the Canada Day weekend, the Stampeders exposed some of their Global and American players to some of the finest eats the True North has to offer, in a Canadian themed food tasting. (Stampeders.com) 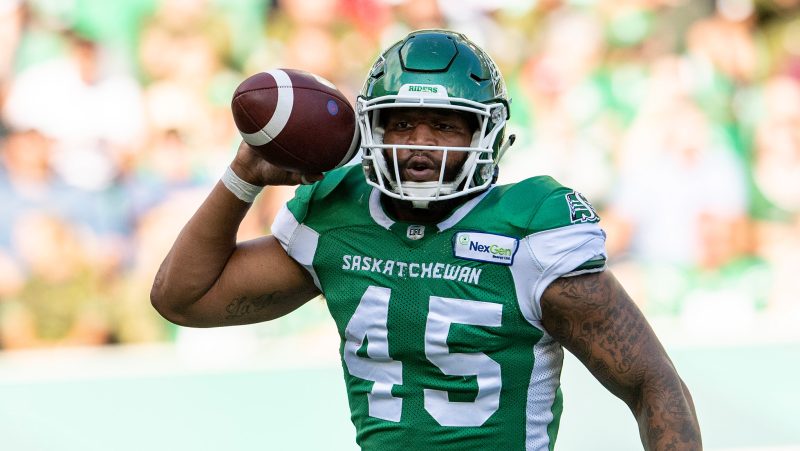 – With one month of regular season CFL football already gone by, a pair of Saskatchewan Roughriders have been named as two of the three CFL Top Performers for June. With running back, Jamal Morrow and defensive linemen, Pete Robertson each earning a spot on the list (CFL.ca).

– Saskatchewan receiver, Kian Schaffer-Baker has had a strong start to his season, leading his team in targets, receptions and yards. The young Canadian headlines the list of must have receivers for Week 5 of the CFL Fantasy season (CFL.ca).

– The Riders have been one of the toughest defences to start the season, leading the league with 21 sacks. Head coach, Craig Dickenson told team media that his defensive group is constantly challenging each other to get better (Riderville.com)

– Ahead of their Week 5 matchup with the REDBLACKS, receiver, Duke Williams has been listed on the team’s injury report with a hip injury (CFL.ca).

– The Winnipeg Blue Bombers continued their undefeated start to the season with a 23-22 win over Toronto on Monday. With a 4-0 record to start the year, the Bombers remain atop the CFL Power Rankings ahead of their game in Vancouver on Saturday (CFL.ca).

– Rookie receiver, Dalton Schoen has been a welcome surprise for the Bombers’ offence and fantasy players alike. In this week’s Start vs. Sit CFL.ca’s Brandon C. Williams outlines why Schoen is a must-add (CFL.ca).

– The legend and legacy of Jack Jacobs with the Winnipeg Blue Bombers continues to live on through the awarding of scholarships to two more Indigenous high school students in Manitoba (BlueBombers.com).

– Ticats’ great, Danny McManus is set to be honoured Friday, October 7 by the team and will be the 25th player to be joining the Tiger-Cats Wall of Honour. McManus played 141 games in the Black and Gold (Ticats.ca). 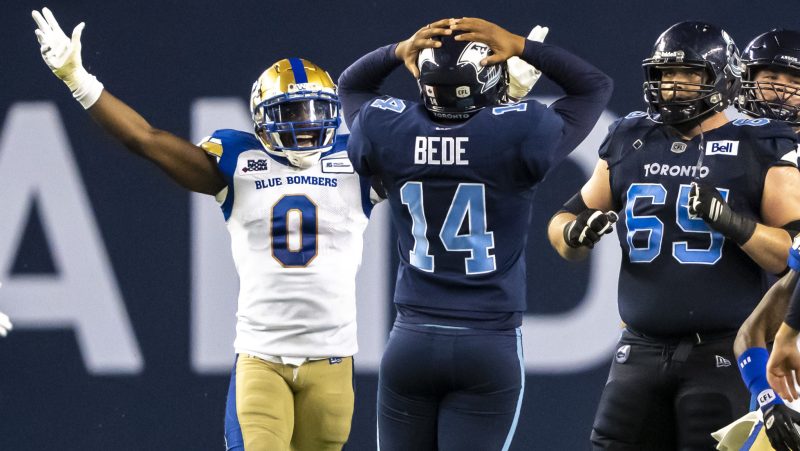 A 23-22 win over the Toronto Argonauts on Monday gave the Winnipeg Blue Bombers their first win in Toronto since 2018 (Kevin Sousa/CFL.ca).

– Following a 23-22 loss to the Blue Bombers on Monday, Toronto Argonauts, quarterback McLeod Bethel-Thompson told team media that the plan for the bye week is to evaluate what has been working and to continue improving (Argonauts.ca)

– Speaking to Argos team media, head coach, Ryan Dinwiddie called the loss in Week 4 disheartening, but maintained that there are positives to be taken from the game heading into the bye week (Argonauts.ca).

– As the Argonauts get set to travel to Halifax for Touchdown Atlantic, stay up to date with everything you need to know ahead of the Week 6 matchup (CFL.ca).

Jeremiah Masoli‘s 8.8 yards per pass are the third best among starting quarterbacks to start the year (The Canadian Press).

– The Ottawa REDBLACKS announced the return of the their Women’s Training Camp. The event is for women of all skill levels and helps to raise funds to support women in sport initiatives (OttawaREDBLACKS.com).

– Defensive backs Abdul Kanneh,  Monshadrick Hunter and Patrick Levels have all been listed on the team’s injury report ahead of their Week 5 matchup in Regina (CFL.ca). 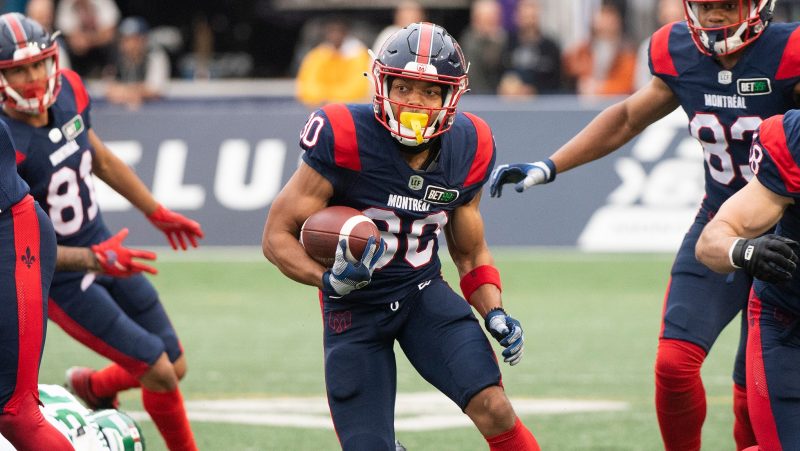 Chandler Worthy returned a kickoff for a touchdown in back-to-back weeks for the Montreal Alouettes, both of them coming against the Saskatchewan Roughriders (The Canadian Press).

– Following a 41-23 road loss to the Roughriders, Montreal quarterback, Trevor Harris told team media in a post-game interview that execution in the third quarter became the teams undoing (MontrealAlouettes.com)

– Montreal Alouettes receiver, Chandler Worthy returned yet another kickoff for a touchdown in Week 4 and once again for his efforts, the Alouettes star returner makes another appearance on the CFL Plays of the Week for Week 4 (CFL.ca).

– The Alouettes traded receiver and returner, Mario Alford to the Riders earlier in the week. In exchange, Montreal receives Saskatchewan’s sixth-round pick in the 2023 CFL Draft (CFL.ca).