From the Editor’s Desk: Say hi to Week 5 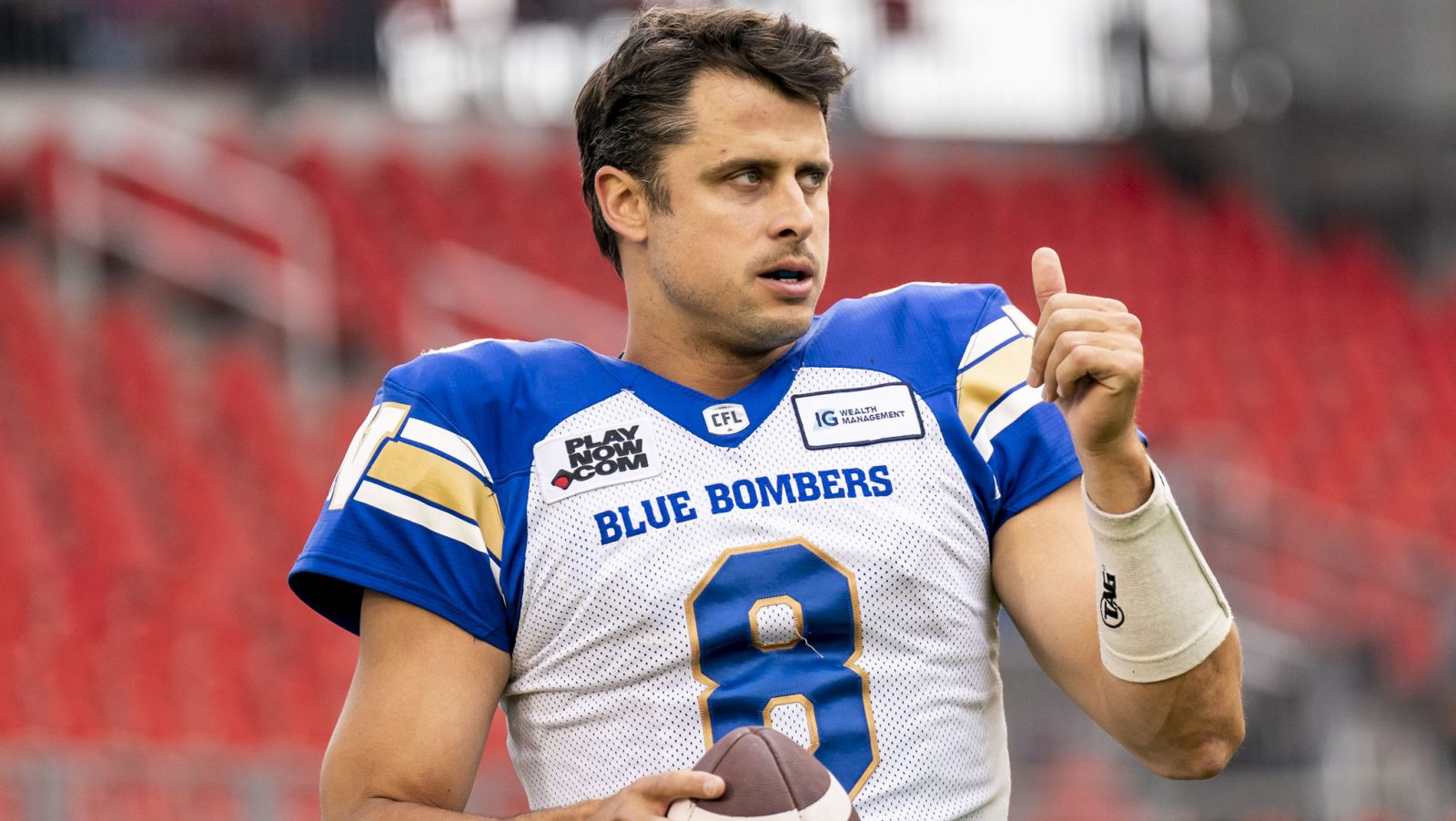 From the Editor’s Desk: Say hi to Week 5

Sometimes football is just so heartbreaking.

That’s what I was thinking as I watched Boris Bede‘s convert attempt sail left of the uprights in the dying seconds of Monday’s game at BMO Field.

The Argos had a really good second half of football, fighting back from a 17-3 halftime deficit. It looked like the tie was imminent and we were going to see overtime football in The Six. But as soon a I thought that, I was brought back to reality as the missed convert silenced the stadium. Strangely enough, Toronto won a game in a similar fashion two weeks ago – a missed 21-yard field goal attempt from the Als David Cote in the same end zone.

It was the Bombers who prevailed on Monday, however, and they played a heck of a game as well, as the reigning Champs remain undefeated on the year. But I feel for you Argos fans, I really do.

On another note, Nathan Rourke is the most exciting player in the CFL right now. Not only is he slinging it like no one’s business, he’s playing like a true veteran. After he tossed back-to-back interceptions on Thursday night against the REDBLACKS, Rourke responded with two impressive touchdown drives. Talk about overcoming adversity.

I had some ups and downs on my CFL Fantasy last week. Let’s start with one of the ups: Nathan Rourke. He had two touchdowns (and two interceptions) to go along with 359 yards through the air and also called his own number five times for 87 yards and a touchdown (the 50-yard run on a third-and-short in the first quarter, remember?) That was good for 33.1 fantasy points and ended up being well worth the hefty price tag. I also had taken one of his receivers, Keon Hatcher, who hauled in all seven passes thrown his way for 166 yards and a touchdown. That performance was good for 29.6 points.

The rest of my team was well below what I had hoped for, with the exception of William Powell (13.2) who scored a TD in his season debut for the REDBLACKS. 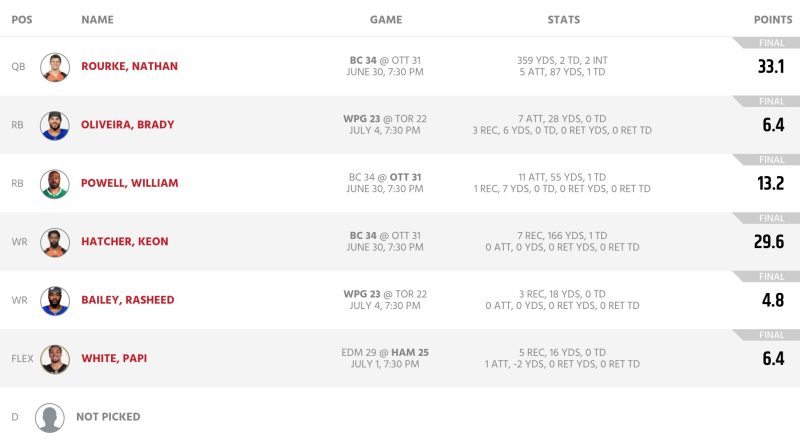 With only three games on tap, picking a CFL Fantasy team is a bit more difficult than usual. I decided against the high price tag of Rourke ($12,752) this week. Against that Bombers defence, I just don’t think it’s a good idea. So instead, I’m taking Bo Levi Mitchell ($8,548). I like the value and he’s put up respectable fantasy points in his last two outings (18.5 and 16.8 against Hamilton and Edmonton, respectively).

At running back, I’m going with Ka’Deem Carey ($8,683) and Brady Oliveira ($4,969). The Oliveira choice was only because I didn’t have a lot of options with the money I had left, since he did only get me 6.4 points last week. I’m banking on Carey having a good outing against the Elks.

I had to take Keon Hatcher ($5,206) again this week. Starting in place of Bryan Burnham last week, Hatcher had an impressive outing against the REDBLACKS. While I don’t think he’ll put up the same numbers against the Bombers, I’m hoping he can take advantage of a tired Winnipeg defence. 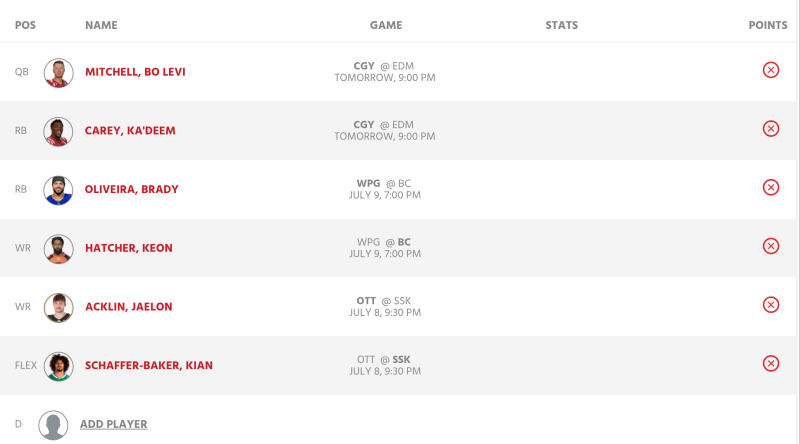 A rested Calgary team is a good Calgary team and coming off a bye, I think the Stampeders continue their good, but not easy, start to the 2022 campaign.

Ottawa’s record doesn’t tell the entire story of how the beginning of their season has gone so far. They could easily have a few wins in their pocket, if not for a few mistakes here and there. It’ll be a challenging game for them as Jeremiah Masoli has to battle against the tough Riders defence and the noise at Mosaic Stadium but I think they get their first win of the season this weekend.

It’s a short week for the Bombers as they played against the Argos in Toronto on Monday night and I think this matchup could be a battle of rest vs. rust. Something tells me Nathan Rourke and co., who haven’t played since Thursday night, have it in them to hand the defending champs their first loss of the year. This will definitely be the game of the week as the pair of undefeated teams battle it out.