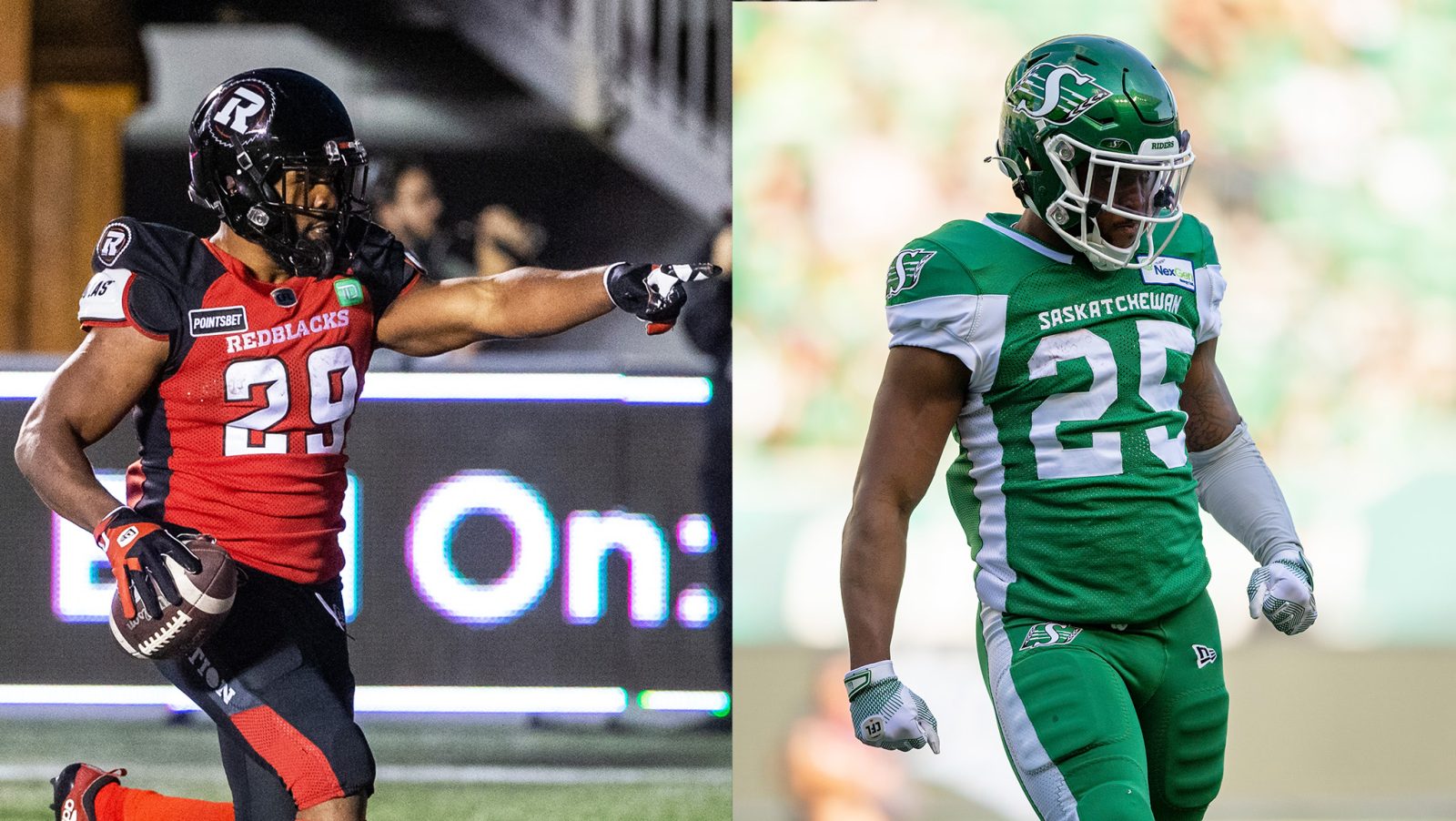 REGINA — The Saskatchewan Roughriders will play an East Division opponent for the third week in a row when they host the Ottawa REDBLACKS on Friday night.

Saskatchewan is 2-1 against the East Division and 2-0 at home this season.

The Riders defence has had a knack for putting pressure on opposing quarterbacks, recording a league best 21 sacks and six interceptions. They will need to continue their stellar play against Ottawa REDBLACKS star quarterback, Jeremiah Masoli.

In their 40-21 win over the Montreal Alouettes in Week 4, the Riders sacked quarterback Trevor Harris five times and Vernon Adams Jr. once. Defensive lineman Anthony Lanier had three of those sacks, while Pete Robertson added two for himself.

Robertson tops the league with seven sacks and anchors a defence that also features playmakers in the form of linebacker Derrick Moncrief, safety Mike Edem and defensive back Nick Marshall.

Defensive back Rolan Milligan and linebacker Darnell Sankey both have 21 defensive tackles to lead the team in that category. They’ll all be tasked with slowing an Ottawa offence, led by Masoli, that’s averaged a third best 291 passing yards per game.

As has been the case in the majority of their four games, Cody Fajardo will be under-centre in Saskatchewan’s Week 5 matchup. He threw for 224 yards and two touchdowns against the Alouettes in Week 4.

In the last meeting between the two teams, which resulted in a 23-10 win for the Riders in Week 3 of 2021, Fajardo completed 30 of his 35 passing attempts, throwing for for 321 yards against the Ottawa defence.

In a team media session, Fajardo acknowledged that as capable a runner from the pocket as he is, he’s has been working on staying in the pocket and throwing the ball. Noting his excitement about the progress he’s made.

“For me personally, I’ve been a runner my whole life and it’s a big part of my game,” Fajardo told riderville.com. “When I’m not hitting the passes I want to hit and I can’t run, it’s very frustrating. I’ve been trying to hone in and be a bit more of a pocket passer these last couple of weeks. I’m excited about that and focusing in on my skills as a passer.”

Wide receiver Kian Schaffer-Baker is coming off a seven reception, 90 yard game which included a 44-yard touchdown reception, while Tevin Jones averaged 18.7 yards over three receptions against the Als.

Look for both Jones and Schaffer-Baker to be targeted by Fajardo when they square off against a REDBLACKS defence that has allowed 826 passing yards this season.

The Riders will look for another strong performance from running back Jamal Morrow who carried the ball 16 times, accumulating 103 yards a week ago. Morrow’s season total of 257 rushing yards, combined with running back Frankie Hickson’s 124, has led the Riders to an average of 119 yards per game, ranking them second best behind the BC Lions.

Head coach Craig Dickenson has mentioned the importance of the run game in the past and it’s something Morrow knows is critical to the success of an offence.

“If we can get the run game going it makes everything easier,” Morrow told riderville.com. “It makes it easier for the receivers and easier for Cody (Fajardo). If we can get it established and be a force to be reckoned with I think it opens up the whole offence.” 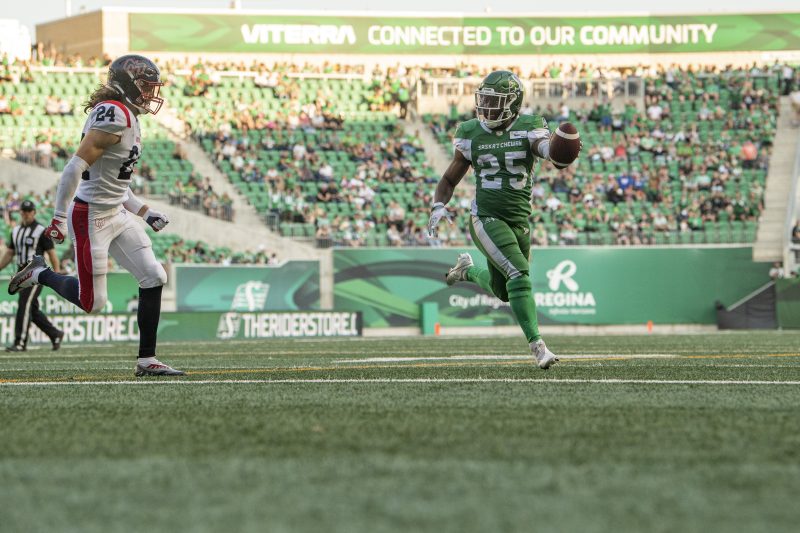 Jamal Morrow was one of two Saskatchewan players to be named as one of the CFL Top Performers for the month of June (Riderville.com).

Masoli enters the game with 873 passing yards but has thrown just one touchdown this season. He heads into Friday’s game with the hopes of improving on his 51.9 pass completion percentage against the BC Lions last week.

Their quarterback isn’t the only one looking for a rebound game. Wide Receiver Jaelon Acklin caught three passes for 24 yards against the Lions, while Nate Behar pulled in a pair of passes for 13 yards.

Wide receiver Darvin Adams led the team with five catches and 92 yards. He’ll try to create time and space in the Riders secondary.

Receiver Terry Williams has made his impact felt on special teams this season. He’s returned 12 kickoffs for 271 total yards and eight punts for 70 yards. He averaged 25.8 yards on 6 kickoff returns a week ago.

REDBLACKS runing back, William Powell returned to the lineup in Week 4, rushing 11 times for 55 yards and a touchdown in his season debut.

Powell will be playing his former team for the first time since rejoining Ottawa this off-season. In two seasons with the Riders, Powell rushed for 1,866 yards and 15 touchdowns, averaging 4.8 yards per carry.

The veteran back will be put to the test against the best run defence in the CFL. The Riders have held opponents to just 54.5 rushing yards per game.

On the defensive side of the ball the REDBLACKS have given up an average of 275.3 yards through the air and 105 yards per game on the ground.

They’ve also had the toughest time getting through the offensive line to the quarterback, having recorded just three sacks. One of those sacks came from defensive lineman Praise Martin-Oguike in their loss to the Lions last week.

In the secondary, Monshadrik Hunter has all three of Ottawa’s interceptions. Two of which came against Nathan Rourke and the Leos. Unfortunately for the REDBLACKS, two of their top defensive play-makers in Hunter and defensive back Patrick Levels will be out against the Riders on Friday. Meaning they’ll rely on defensive backs Justin Howell, Sherrod Baltimore and Anthony Texada to step up in their absences.

Four teams in the West Division have winning records and the Riders will try to move to 4-1 with a win Friday night. Despite their record of 0-3, with a win in Saskatchewan the REDBLACKS would be tied for first in the East Division.

Kickoff in Regina is set for 9:30p.m. ET and the game can be seen on TSN, RDS and ESPNEWS and can be followed along on CFL.ca’s Game Tracker.