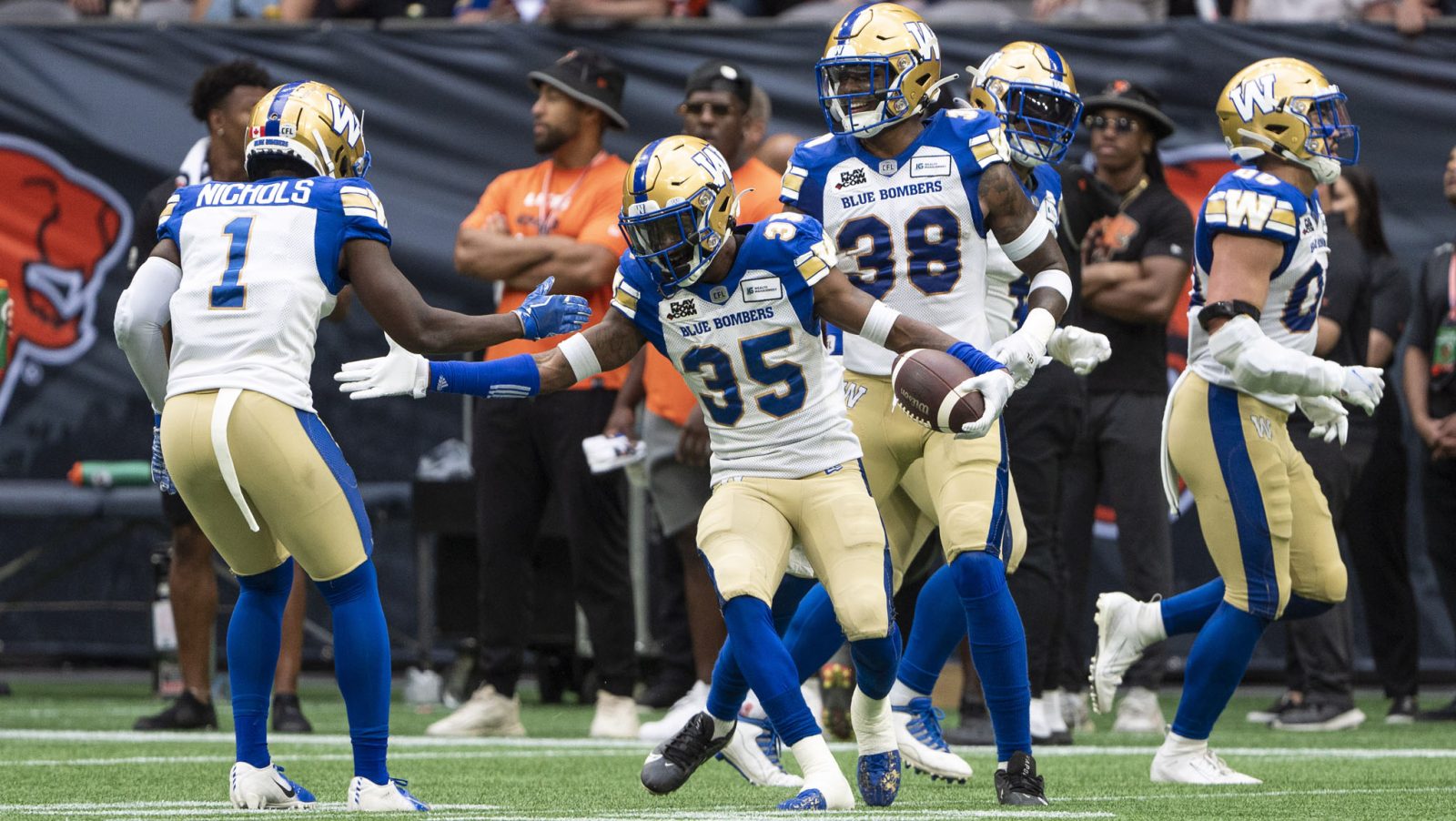 TORONTO — It’s a club that doesn’t officially exist in the CFL but it might be helpful one, considering that it’s growing.

When the BC Lions got back to their locker room on Saturday night, they could have used some text messages from the Saskatchewan Roughriders and the Hamilton Tiger-Cats, letting them know that while it may not all be OK at the moment, they’re not alone.

In their 43-22 loss to the Bombers, the Lions joined the club of promising teams that have run into that Blue and Gold wall, only to come away beaten and empty handed.

Sure, this was just an early season meeting for the Lions and Bombers; 3-0 up against 4-0. But as Pat Steinberg said in his MMQB column, it was a statement from the two-time defending champs. Upstart teams, contenders, threats, they all get dealt with the same way. It’s a lesson that the Roughriders and Tiger-Cats have learned on stages of all sizes over the last two seasons.

It’s also a remarkable testament to the Bombers’ dominance in their Grey Cup-winning/Zach Collaros era. Sometimes it’s easy to take for granted just how consistent this team has been. Despite a shaky win against Toronto last week and despite the cross-country travel on a short week, the Bombers let us know that they’re the top dog in this league. We’re witnessing greatness, week-in, week-out.

The Bombers’ approach to their Saturday showdown of the undefeated was as low key as you might expect, if you’ve followed this team at all over the last few years. Zach Collaros and Co. said it was just the next game in the schedule, just another game to go out and try to win. They did that, but their play told a different story. The defence corralled a slippery-as-a-fish offence better than any other Lions opponent has this season, at 338 yards. Collaros was his steady, give-you-what-you-need self, while dropping in the odd spectacular play, throwing for 288 yards and three touchdowns. This was a statement win. Now the Bombers will go about not saying much, while trying to make the same statement again this week against undefeated Calgary.

The Lions and the Bombers seemed to suck up all of the undefeated air this past week, but this week is Calgary’s turn with the vacuum. The 4-0 Stamps travel to Winnipeg to face the 5-0 Bombers on Friday, where the final two undefeated teams in the league collide. Calgary was dominant in every phase on Thursday against the Elks, with a lengthy weather delay the only thing slowing them down in their 49-6 win. Malik Henry, with 18 catches for a league-leading 388 yards and three touchdowns, is off to a tremendous start to the season.

In the wake of his team’s first loss of the season, Lions’ QB Nathan Rourke said that he was happy the meeting with the Bombers came early on. There’s a lot that they can take from it, so they can prepare for their next clash with the champs. That doesn’t come until Week 19. The two teams close out their regular season play in Winnipeg in Week 21.

“It wasn’t going to be all sunshine and roses. I’m not that good of a player. I have to go through this kind of stuff personally, on a personal level. But this team also, we weren’t going to go undefeated. There’s too many good teams in this league. It’s too long a season,” Rourke told Postmedia after the game.

“We’re going to have to through some adversity; all great teams do. I think this is a great team and I wouldn’t want to do it with any other group.”

The Riders’ win was clouded by the ejection of defensive lineman Garrett Marino; a play that the league began investigating over the weekend. As we wait to see what emerges from that, the Riders head to the Touchdown Atlantic game this week with a 4-1 record. A road game — let alone one in a new time zone — could be a challenge for Craig Dickenson’s squad, which took its only loss of the year in Montreal in Week 3. With o-line and d-line injuries — sack-leader Pete Robertson was lost in last week’s win — the Riders’ depth will continue to be tested.

There isn’t usually much movement for teams coming out of bye weeks, but the outlook of the East Division changed with Jeremiah Masoli‘s injury. The Argos come out of that bye week with a heartbreaking loss to put behind them. It won’t be an easy task, travelling to Halifax for the Touchdown Atlantic Game this week, then having to go up against a very difficult opponent in the 4-1 Roughriders. Bad taste in their mouths aside, the Argos can take a lot of positives out of their battle with the Bombers last Monday night. And, thanks to the struggles of the teams around them in the East, they stand in first place in the division, despite their 1-3 record.

For all of the potential on-field change we saw through QB injuries in Week 5, the Als were the one team with significant off-field change. GM Danny Maciocia takes over as head coach for the recently dismissed Khari Jones and the Als will try to gain some ground on the Argos in an East Division that, thanks to widespread disappointing starts, remains wide open. The new look Als are the only Eastern team to get a win against a West opponent. They stunned Saskatchewan in Week 3 and will look for their second West win when Edmonton rolls into town on Thursday.

The loss of Jeremiah Masoli and the REDBLACKS’ 0-4 record leads to a predictable drop in these rankings. Caleb Evans went in for Masoli in Saskatchewan. Will the team stay with the second-year pivot on Saturday in Hamilton? Despite the staggering loss of Masoli, this isn’t the same REDBLACKS team that sputtered without a No. 1 pivot last year. William Powell‘s workload will likely increase this week and there are still a plethora of talented receivers ready to make plays for whoever head coach Paul LaPolice will turn to at quarterback.

It seems it’ll be at least a few weeks before we see where Tre Ford could take the Elks. The rookie QB had one tremendous highlight reel play against the Stamps, vanishing out of a collapsing pocket before circling back to connect with Kai Locksley for a 46-yard hookup. Ford was injured on the next play. With the Elks’ QB spot in flux against the Stamps, the game slipped away from them in the third quarter, leading to Edmonton’s second significant blowout of the season. Chris Jones was able to have his team rebound from their big Week 1 loss to BC. He’ll have to do it all again as the Elks have Montreal in front of them on Thursday and then a date with the Bombers in Week 7 before they get a bye week.

From talking about meetings of undefeated teams in back-to-back weeks at the top of this list, we get to Hamilton, where the winless Ticats host the winless REDBLACKS on Saturday at Tim Hortons Field. There will be desperation to win on both sides, of course, but given Ottawa’s injury situation this feels like one that the Ticats can’t let slip away. Fun fact about this matchup: it’s the first time this season that either team is facing an East Division opponent. The East’s overall struggles have made a bad Ticats start a little more appetizing, but the bottom line is that the wins need to start coming for them if they want to get into the race of this season.