Halifax gets a taste of the CFL at Touchdown Atlantic 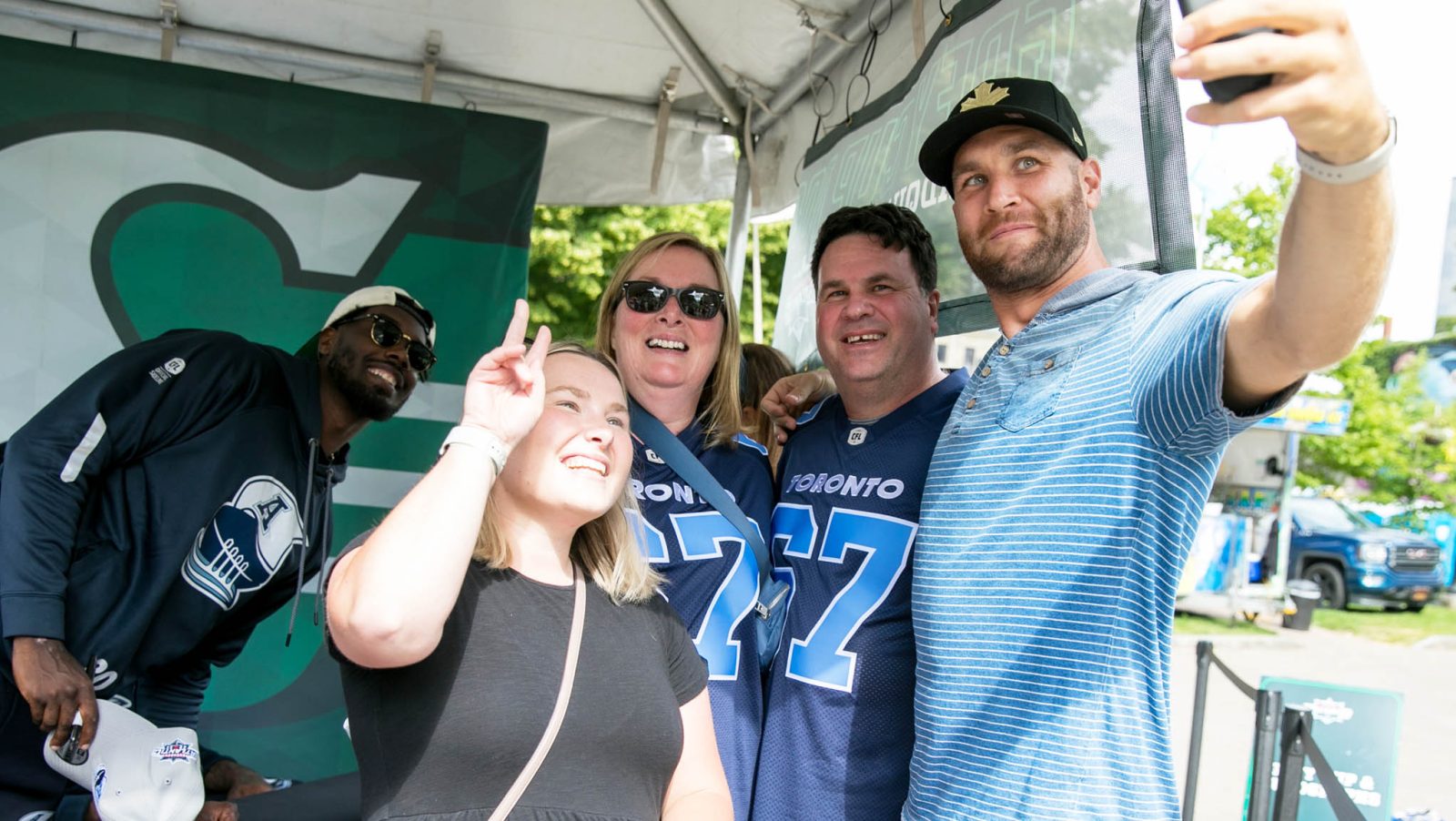 Halifax gets a taste of the CFL at Touchdown Atlantic

HALIFAX — The party was just getting started when John Ryerson took the mic. The director of events for the Atlantic Schooners stood at Grand Parade square in downtown Halifax, with Halifax’s city hall behind him, as Friday afternoon shifted into the evening.

Wearing the Schooners jersey he’s worn to over 30 Grey Cups, the lifelong CFL fan thanked the Saskatchewan Roughriders’ pep band for their performance and spoke to the growing crowd at the Grey Cup 109 Party Headquarters block party.

Ryerson’s passion for the idea of having a team from Atlantic Canada join the CFL poured out of him. He told the crowd that he wouldn’t give up and that he believed the region would land the team he’s spent decades hoping for. This week, with the Touchdown Atlantic game in Wolfville, N.S. bringing fans from across the country out to watch the Riders play the Toronto Argonauts, provided a small but meaningful taste of what could be.

“I think with (the events) happening in Halifax, it’s really the cement that we needed in this program. We needed Halifax to see what a small sampling of what they could have really is,” Ryerson said as Eclectic Revival belted out some traditional East Coast songs behind him.

“I think that by looking around and seeing the Rider fans and the Winnipeg fans and the Argos fans and everybody here, this has never happened before here. So what I’m thinking is that maybe it needed that punch. This might be the punch that really, maybe galvanizes the thoughts on getting a team and building a stadium in Halifax. I think it’s closer than people think.”

RELATED
» A letter from Commissioner Ambrosie to Atlantic Canadians
» Touchdown Atlantic news and info
» O’Leary: Lauther thrilled to be back home
» O’Leary: Argos, Riders play with an eye to the future
» McManis, Argos prepared to take on Riders’ run game

Ryerson has been a longtime host of the Atlantic Schooners Kitchen Party at Grey Cup weeks across the country. At his 2018 Grey Cup party in Edmonton, Schooner Sports and Entertainment, the ownership group that aims to bring a team to Atlantic Canada, let Ryerson officially unveil the team name. While he waits for that 10th CFL team to become a reality, he’s enjoying this week and taking a good look at what the CFL in the Maritimes can look like.

He helped organize the 2005 pre-season game in Halifax, but had to miss it to attend a wedding. Flight cancellations and delays got him back from Toronto into Halifax this year just in time to enjoy the festivities.

“This to me is a sweet moment. Tomorrow it will feel it’s going to be even sweeter. It’s real. This is a real football game. It’s not pre-season, this is the real stuff. This is what we could be enjoying on a regular basis in this part of the country. And there will be a way we’ll get it done. We just will.”

Not too far from Ryerson, Fallon and David Keogan sat in the park clad in their Riders gear, taking in the festivities. The couple flew in from Regina for the game to support their team, making their first-ever trip to Halifax.

Fallon joked that as downtown Halifax started to fill up with green jerseys and t-shirts, locals were stopping them to ask what was happening. It felt familiar to them.

“I think they could do something out here like we do in Saskatchewan,” David said.

“They would get people traveling from all over the Maritimes to come to the games and build up a similar culture to what we’ve got in Saskatchewan. I think that would be great.” 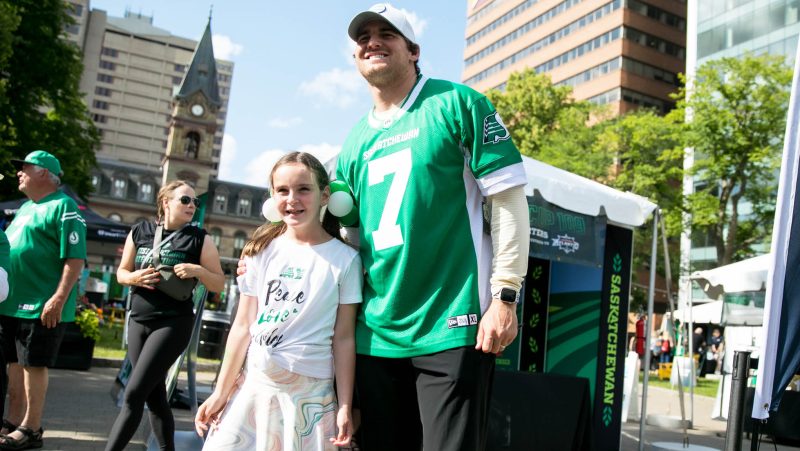 Roughriders’ quarterback Cody Fajardo poses with a fan during the team’s autograph session on Friday in Halifax (Kelly Clark/CFL.ca)

Near the stage, Sherri Bourne was enjoying the Riders’ pep band. A native of Carbonear, NFLD., Bourne has lived in Halifax for seven years. Thanks to her three girlfriends from Saskatchewan, she was decked out in Riders gear, complete with a Riders’ logo sticker on her cheekbone.

“There’s a lot of hype around what’s going to happen in Wolfville,” she said, while clarifying football was something new to her. Still, she was loving the atmosphere at the block party and sees the positives of having a team in this region.

“Look at the Wanderers (of the Canadian Premier League),” she said. “It brings a lot of energy to the town and everyone loves to have a team to cheer for. It would be fantastic. It just brings everybody out. It’s community.”

Rob Millard led a rowdy group of Argos fans into the fun of Friday night. Wearing a team flag over his shoulders like a cape, the Trenton, Ont. resident has made a number of trips out east for Touchdown Atlantic games and jumped at the chance to get out to Halifax and Wolfville this year.

“(The atmosphere) is great because you’ve got the two best teams in the CFL here. You’ve got the Riders,” he said, raising his voice and gesturing over to a table full of fans in green. “Great guys. And you’ve got the Argos: Greater guys!”

Millard said it felt like a Grey Cup atmosphere for him and his friends this week, seeing fans of teams across the league travelling to take in a game in a new location. If it were to all work out and a team did get to the Maritimes, the idea of a Grey Cup out here would be very exciting to Millard.

“It’s not just the community here to support their team. They’d have the whole CFL that would come and go to the game,” he said.

“The Grey Cup in Halifax would be the best in the history of the Grey Cup,” Ryerson said.

“People will come here, there’s a good chance they might not even want to go home. It would be so powerful. I don’t have the words to explain what a Grey Cup would be like in the city of Halifax…and with their team in it? Wow, what a perfect storm, so to speak.”

“Oh, I’d come, for sure. It’d be great,” said Gord Cross, another Saskatchewan resident that made the trip to Halifax. “We’re having a great time here, so (a Grey Cup trip) would just a little bit of a longer time. And later in the year so we’d get more lobster. That’d be perfect.”