Als hold off REDBLACKS for 2nd win of season 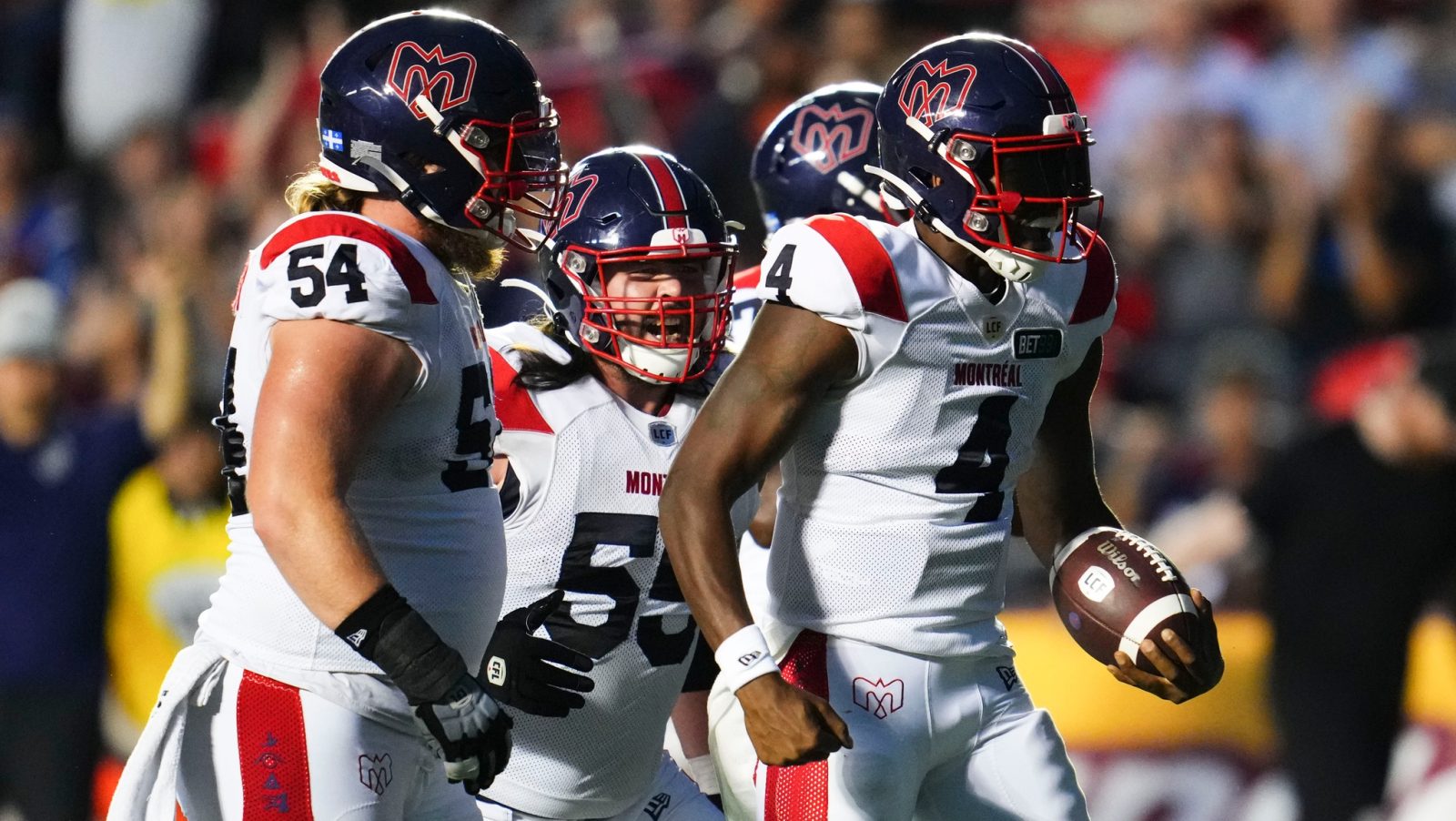 Als hold off REDBLACKS for 2nd win of season

OTTAWA — Trevor Harris threw two touchdowns and Dominique Davis had three rushing touchdowns as the Montreal Alouettes held off the Ottawa REDBLACKS for a 40-33 win on Thursday night at TD Place.

Montreal scored 15 points in the fourth quarter and came up with a defensive stop in the final minute to seal the victory. The Als improved to 2-4 on the season and are now tied with Toronto atop the East Division.

REDBLACKS quarterback Caleb Evans engineered a late touchdown drive to make it a seven-point game with just over two minutes left, but the comeback attempt fell short on Ottawa’s final drive as Darvin Adams dropped a pass in the end zone.

Harris completed 25 of 31 passes for 341 yards, while Hergy Mayala caught his first touchdown as an Alouette and finished with 102 receiving yards on five catches.

Evans completed 25 of 40 passes for 297 yards and a touchdown in the loss. The dual-threat quarterback also added 52 rushing yards and two touchdowns on eight carries.

Ottawa receiver Jaelon Acklin led all players with 133 yards on just five catches, while Adams finished with 118 yards on nine catches — including his first touchdown as a REDBLACK.

RELATED
» Box Score: REDBLACKS, Als by the numbers
» Through the Lens: Als at REDBLACKS
» ‘We needed this’: Als bounce back to move into tie atop East Division
» Statement on the passing of former CFL Commissioner Doug Mitchell
» Watch: Antwi’s 55-yard rush leads to Alouettes TD

The REDBLACKS’ offence established an early rhythm and opened the scoring with a quick 75-yard touchdown drive on their second possession. Evans moved the ball into Montreal territory with a 42-yard over-the-shoulder strike to Acklin down the left sideline, and he followed it up two plays later with a five-yard touchdown pass to Adams.

Adams came across the formation before catching the short pass and turning it upfield into the end zone, with fellow receivers R.J. Harris and Shaq Johnson providing solid blocking on the outside. Lewis Ward kicked the convert to give Ottawa the early 7-0 lead.

Ottawa added a single late in the first quarter when Ward’s 40-yard field goal attempt went wide and out of bounds in the end zone.

The REDBLACKS continued to move the ball early in the second quarter, but Montreal’s defence managed to limit the damage with a key goal-line stand that forced Ottawa to settle for a 15-yard field goal from Ward.

Montreal quickly cut into the the lead on the next drive, as Harris engineered a 70-yard touchdown drive in less than two minutes.

Harris got things started by connecting with Mayala for a 69-yard gain, with Mayala getting wide open behind the secondary. Defensive back Antoine Pruneau dragged Mayala down at the goal line, but it only delayed the touchdown as Davis scored on the quarterback sneak one play later.

The Als opted to go for the two-point conversion, and Harris made it count with a completion to receiver Eugene Lewis — cutting Ottawa’s lead down to three points.

Montreal stormed back to take the lead with a 101-yard drive that saw running back Jeshrun Antwi break off a 55-yard run. Defensive back Randall Evans made the touchdown-saving tackle, but Harris capped off the drive four plays later with a five-yard touchdown pass to Mayala.

Ottawa quarterback Nick Arbuckle made an appearance late in the second quarter, and he caught the defence off guard with a 47-yard strike to Acklin while they were expecting a quarterback sneak. The pass led to a 13-yard field goal from Ward in the final seconds before halftime.

Ward added a 37-yard field goal early in the third quarter, but Montreal quickly responded with its third touchdown drive. Harris moved the ball down the field with five completions before Davis found the end zone again on another quarterback sneak. David Côté kicked the convert to give the Als a 25-17 lead.

But Ottawa generated momentum with a big special teams play later in the third quarter. Als returner Chandler Worthy mishandled a punt and was ultimately tackled in his own end zone by Pruneau for the safety. The safety was awarded after the play was reviewed, cutting Montreal’s down to six points.

Ottawa took back the lead on the ensuing drive. A 17-yard run from running back William Powell helped set up a quarterback sneak touchdown from Evans. Ward added the extra point to give Ottawa a 26-25 lead entering the fourth quarter.

Davis put Montreal back on top with his third quarterback sneak touchdown of the game, and Harris followed it up with a successful two-point conversion pass to receiver Jake Wieneke.

Montreal’s defence generated a huge turnover with six minutes left in the fourth quarter, as defensive back Najee Murray knocked the ball out of the hands of receiver Nate Behar. Linebacker Micah Awe scooped up the fumble and stormed down the field for 68 yards before being tackled by Evans.

The turnover set up Harris’ second touchdown pass of the game — a three-yard strike to Lewis. Côté added the convert to put Montreal up 40-26.

Evans moved Ottawa closer with his second rushing touchdown of the game, but the comeback attempt ultimately came up short with a turnover on downs in the final seconds.

The Alouettes will kick off Week 8 when they travel to face the Hamilton Tiger-Cats next Thursday at 7:30 p.m. ET, while the REDBLACKS will next face the Toronto Argonauts on the road on Sunday, July 31 at 5 p.m. ET.