Power Rankings: Living in a blue and gold world 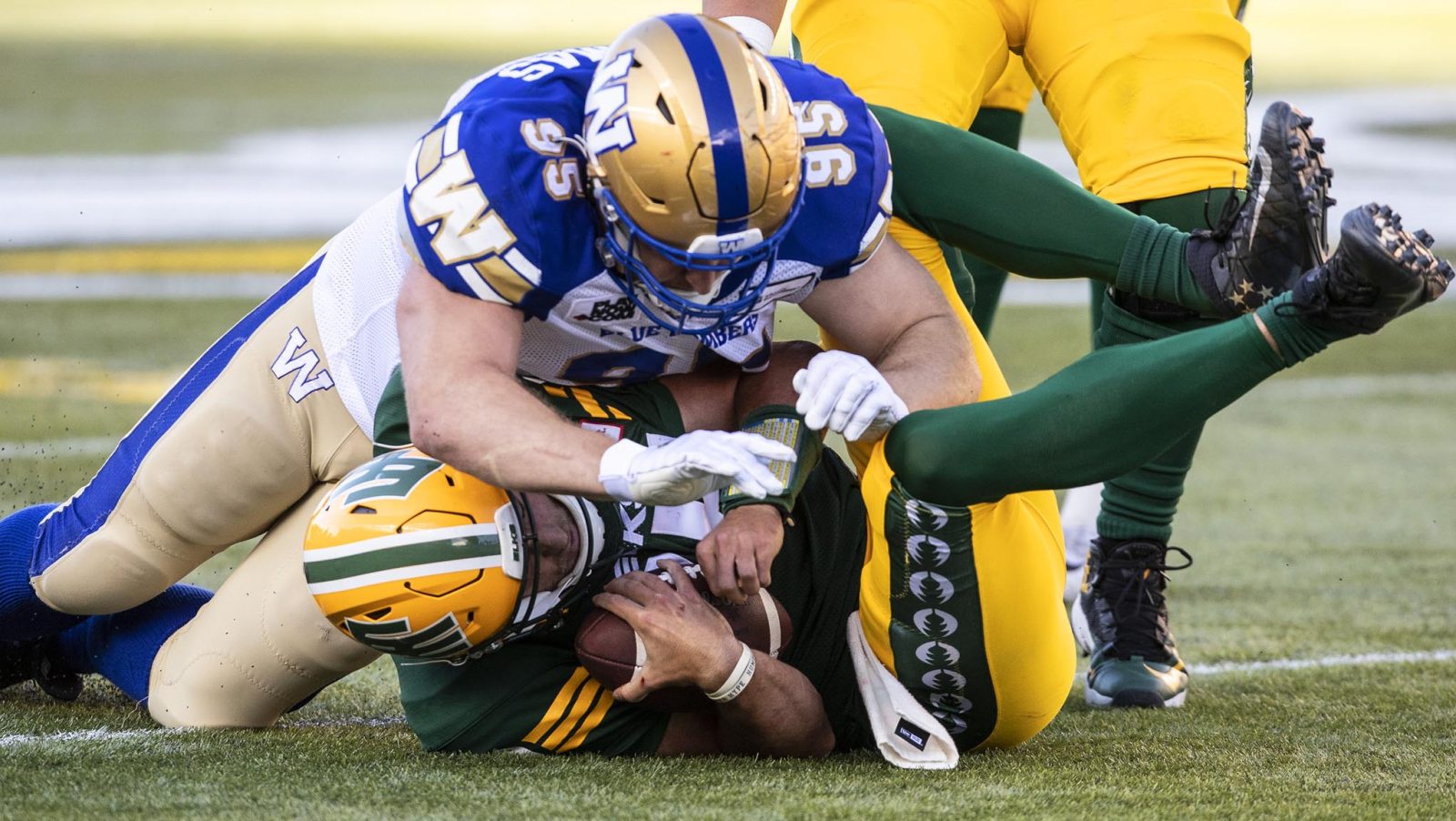 Power Rankings: Living in a blue and gold world

TORONTO — At a certain point, it just feels like nitpicking.

The Winnipeg Blue Bombers are winning at an unprecedented clip and now sit at 7-0 on the season. They’re chasing a 62-year-0ld record for the team’s best-ever start (10-0). More important, they have their eyes on the bigger picture at all times, which of course is winning another Grey Cup. That third Cup would make them the first three-peat team since Edmonton’s dynasty days, when they rattled off five in a row from 1978-1982.

Similar to the time trial version of Mario Kart, the Bombers are racing against the ghostly silhouettes of historical greats, week after week, season after season now since 2019. Unlike a video game, it hasn’t been clear cut domination every time they take the field. Jeremiah Masoli racked up yardage against them, twice; Boris Bede helped them with a missed extra point; Kamar Jorden couldn’t hang on to an end zone reception and this week, the offence felt like a slow turning engine that caught just enough to get them out of Edmonton intact.

But, intact they are and that’s the point. This championship-hardened group finds ways to win, sometimes in unbelievably dire looking circumstances. They haven’t all been pretty, but in a way that makes this team even more fearsome. They find a way, as the great teams have always done. Their place atop of the Power Rankings remains the same.

If someone told you one quarterback was going to complete just seven passes in Week 7, your guess would have likely landed on Saskatchewan’s Jake Dolegala. Instead, it was the reigning MOP, Zach Collaros, who went 7-16, while the Bombers still managed to stay perfect this season, going to 7-0 with their 24-10 win over the Elks at Commonwealth Stadium. The Bombers will obviously need more than that this week, when they travel to Calgary to face a Stampeders team that they topped in dramatic fashion two weeks ago.

We’ll re-introduce you to one of the scariest phrases in the CFL: The Stampeders are coming out of a bye. The well-rested Stamps will host the undefeated Blue Bombers this week. Dave Dickenson and his staff make excellent use of that week off of work and will no doubt want to avenge their Week 6 gut punch of a loss to the Bombers and to give the defending champs their first blemish of the season. Statistically, it’s bound to happen at some point, right? The Stamps just might have a good shot at doing it here in Week 8.

It wasn’t the runaway at-home win that Lions fans were treated to earlier in the season, but BC’s defence dug in and made some key plays to take them to win No. 4 on the season. Lucky Whitehead‘s return to the end zone was a good sign for him, as he’s dealt with ankle issues early on this year. Another good sign is the pending return of Bryan Burnham, who adds an elite pair of hands to a group that’s shown great depth in his absence. That receiving corps may not be at full strength in Saskatchewan this week, but it’s definitely something to watch for as the Lions enter a heavy stretch on the schedule after a pair of early-season byes.

McLeod Bethel-Thompson threw for a season-best 336 yards and Andrew Harris trucked for a season-best 143 yards as the Argos took control of first place in the East Division with their third win. We know he’s 35 and that maybe you can’t do this week-in and week-out, but that run-heavy Argos’ offence was a force, wasn’t it? The frustration that Harris showed in Wolfville, N.S. a week earlier was gone in Regina. Might the Argos have a formula to start stacking up wins? With Ottawa and Hamilton struggling, the East remains there for the taking.

What to make of a Riders’ loss that comes under some uniquely trying circumstances? On the one hand, the shorthanded Riders had a chance to set themselves up at least for a game-winning field goal on Sunday night, staring down a 21-all game with the Argos. The fear going into this was that the inexperienced Dolegala would be the one that would hurt his team and that the Argos could run away with this one. That wasn’t the case. Given the status of the teams behind them in these rankings and the circumstances around this loss, it doesn’t hurt the Riders here this week. We’ll see if they can get back to looking like themselves when they host the Lions on Friday.

The Alouettes fought off a desperate Ottawa REDBLACKS team on Thursday night to pick up win No. 2 of the season. Incredibly, that 2-4 mark is good enough to have the Als sitting in second place in the East Division. Perhaps almost as important for this group, it got its first win under new head coach Danny Maciocia. That could help the team turn the page on the Khari Jones era and move forward with their season in a division that’s littered with underwhelming records and therefore is still very wide open, just a third of the way through the season.

Elks head coach and GM Chris Jones cited a lack of intelligence and discipline in the aftermath of his team’s loss to the Bombers this week. Consistency seems to plague the Elks, who have endured a couple of big blowout losses this season, matched them with a pair of wins and have seen the finer details sting them in their other three losses. A smaller plague on the team: Injuries. The bye week comes at a good time for a club that would love to see some of those faces on the one- and six-game injured lists start to make their way back to action.

Turnovers continue to hurt the Ticats (they lost the ball five times in BC), who had a golden opportunity to steal a win against the Lions. Those hopes were swatted away in the final three minutes by Marcus Sayles and Loucheiz Purifoy, who ensured that Dane Evans and Co. dropped to 1-5. As bad as the record is, the Ticats have a chance to close the gap with the Montreal Alouettes making a stop at Tim Hortons Field this week. Seeing Khari Jones in Ticats gear, wherever he might be in the building on game day is a good element of drama for this match-up. A much-needed win will be the focus for the Ticats, though.

Frustration looms over the REDBLACKS, whether it’s on the field or in the stands at TD Place. GM Shawn Burke’s roster is better than its winless record, but no one is concerned about how good a team looks on paper at this point in the season. As our Marshall Ferguson pointed out in the wake of Thursday night’s disappointing loss, there is still reason to believe that the REDBLACKS can not only turn things around, but be a team that matters come November. This group has stumbled out of the gate and has found everything imaginable to trip on through six games, but the season is a marathon and the race is still in its early stages.