Steinberg’s MMQB: The Hall of Fame can wait 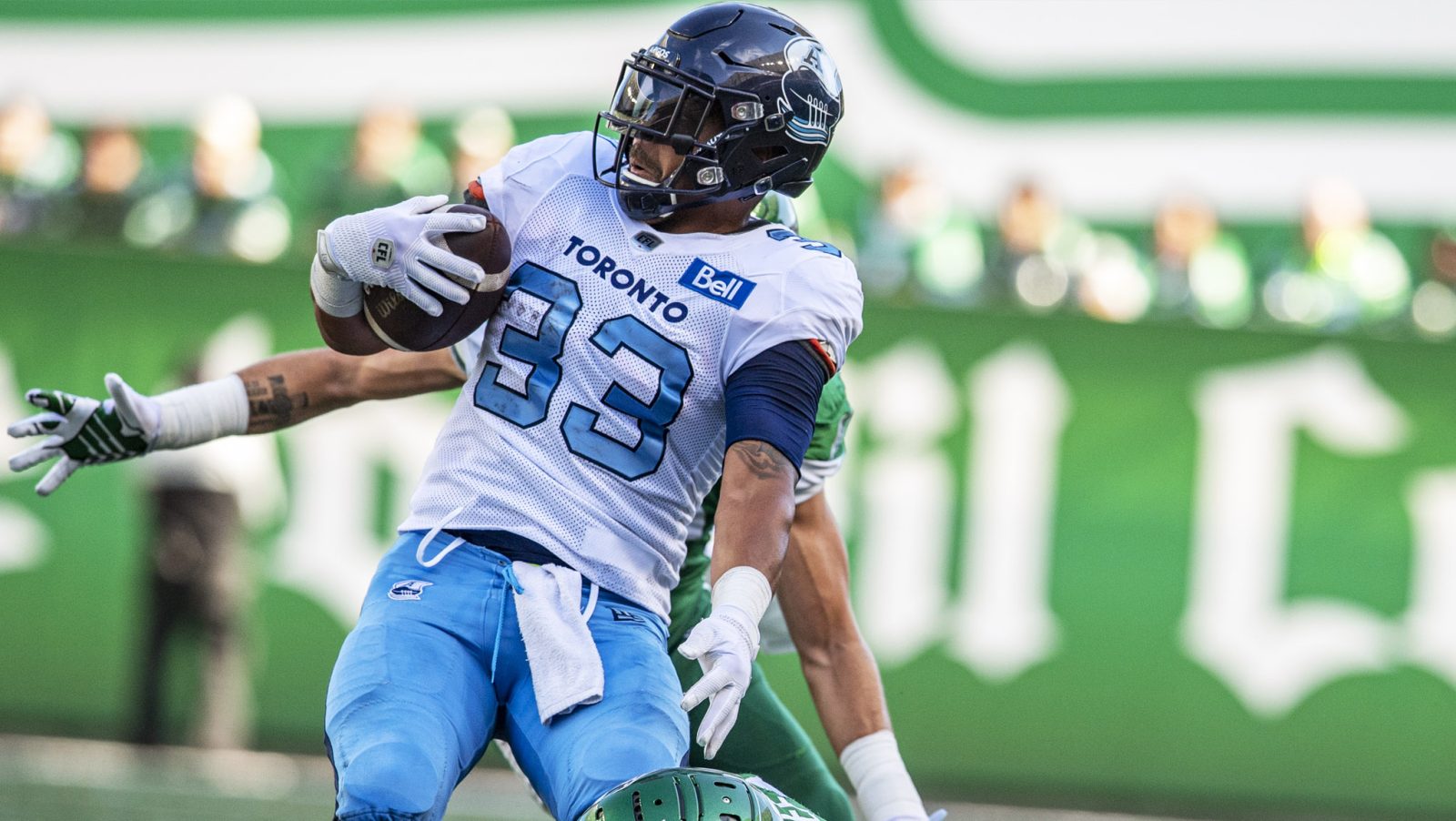 Steinberg’s MMQB: The Hall of Fame can wait

Ah yes, it’s time for our annual reminder that Andrew Harris is still one of the best players in the CFL. Harris closed out Week 7 with a performance that showcased all he’s capable of: 143 rushing yards on 26 carries and seven receptions for 45 yards. Those 188 total yards powered the Toronto Argonauts to a 31-21 win on the road in Saskatchewan.

Part of Harris’s 143 yards pushed him over 10,000 rushing yards for his career, becoming the first Canadian back to eclipse that mark. That’s to go along with his three Grey Cup championships, five league All-Star nods, and his 2017 Most Outstanding Canadian award. Harris is one of the greatest to ever play the position, the best Canadian running back in league history, and a first ballot Hall of Famer…but we already knew that.

Back to the present, now. For all that was made of Winnipeg’s pragmatic decision to allow Harris to walk to free agency after a second straight Grey Cup victory, we’re talking about the league’s second leading rusher here. At 407 yards, Harris is only 30 behind Jamal Morrow of the Riders for the league lead, and that’s with two fewer games played.

And that’s not even to suggest the Blue Bombers made a mistake. A salary cap demands sacrifices sometimes, especially with Winnipeg’s star-studded core group coming off back-to-back championships. Not everyone can get paid. The Bombers had to part ways with the likes of Harris and Kenny Lawler, among others, coming into this season. It was a tough decision to say goodbye to a hometown superstar, but it’s a choice Toronto was thrilled to take advantage of.

And, honestly, we shouldn’t be surprised with what Harris is doing to start 2022. For half a decade there have been questions going into a season about if Harris was on the other side of his career. Or if this was going to be the year where age caught up. Now at 35 years old, the answer is once again an emphatic no.

And, even if we understand why the Bombers made the tough choice not to bring Harris back, you can’t tell me there’s not a hefty chip on his shoulder this season. As we’ve seen time and time again, that makes Harris even more dangerous.

We saw it in his fiery, two-touchdown performance at the 2019 Grey Cup. Then last season, with some questioning whether he was still the guy, Harris did it again in the playoffs with a pair of huge games in the Western Final and once more in the Grey Cup. Make this guy mad at your own peril, I guess.

At 3-2, the Argos look like the East Division’s best team well past the quarter point of the season. And then there’s Harris’s old team in Winnipeg sitting at 7-0 and the unquestioned best team in the West.

How fun would a showdown between these two be in the 109th Grey Cup in a few months?

We’ve known Jaelon Acklin was a promising talent for a few years now, but we’re witnessing the emergence of a superstar in Ottawa this season. Acklin busted off another 133 receiving yards Thursday for his second straight game in triple digits and third of the season. He now leads the league with 543 receiving yards and has been a shining light for the REDBLACKS thus far.

Speaking of which, you can’t help but feel bad for the way things have gone for Ottawa. The REDBLACKS are now at 0-6 after Thursday’s loss to Montreal, but most of those games have been agonizingly close. Five of Ottawa’s losses have come by one possession or less, including Week 7 against the Alouettes when Darvin Adams dropped a game-tying touchdown with less than a minute on the clock.

I give Montreal’s Trevor Harris a ton of credit, though. Harris and Montreal’s offence couldn’t get anything going for the first 15 or 20 minutes of Thursday’s 40-33 win, but when they finally got into a groove, they were quite dangerous. Harris, who started the season at number two on the depth chart, threw for 341 yards and two touchdowns as he tries to solidify himself as the starter.

I thought there was a lot to like in BC’s 17-12 win over Hamilton on Thursday night. After being humbled by Winnipeg in Week 5, the Lions came off a bye week and grinded their way to a win against a Tiger-Cats team that hung tough and wouldn’t go away. It wasn’t a perfect night for Nathan Rourke and the group, but winning tough games is part of the process.

Finally, after another comprehensive Blue Bombers win, this time over Edmonton, I can’t wait for the marquee match of Week 8. Unbeaten Winnipeg visits 4-1 Calgary in a rematch of their Week 5 showdown that came right down to the wire. That game goes on Saturday night.