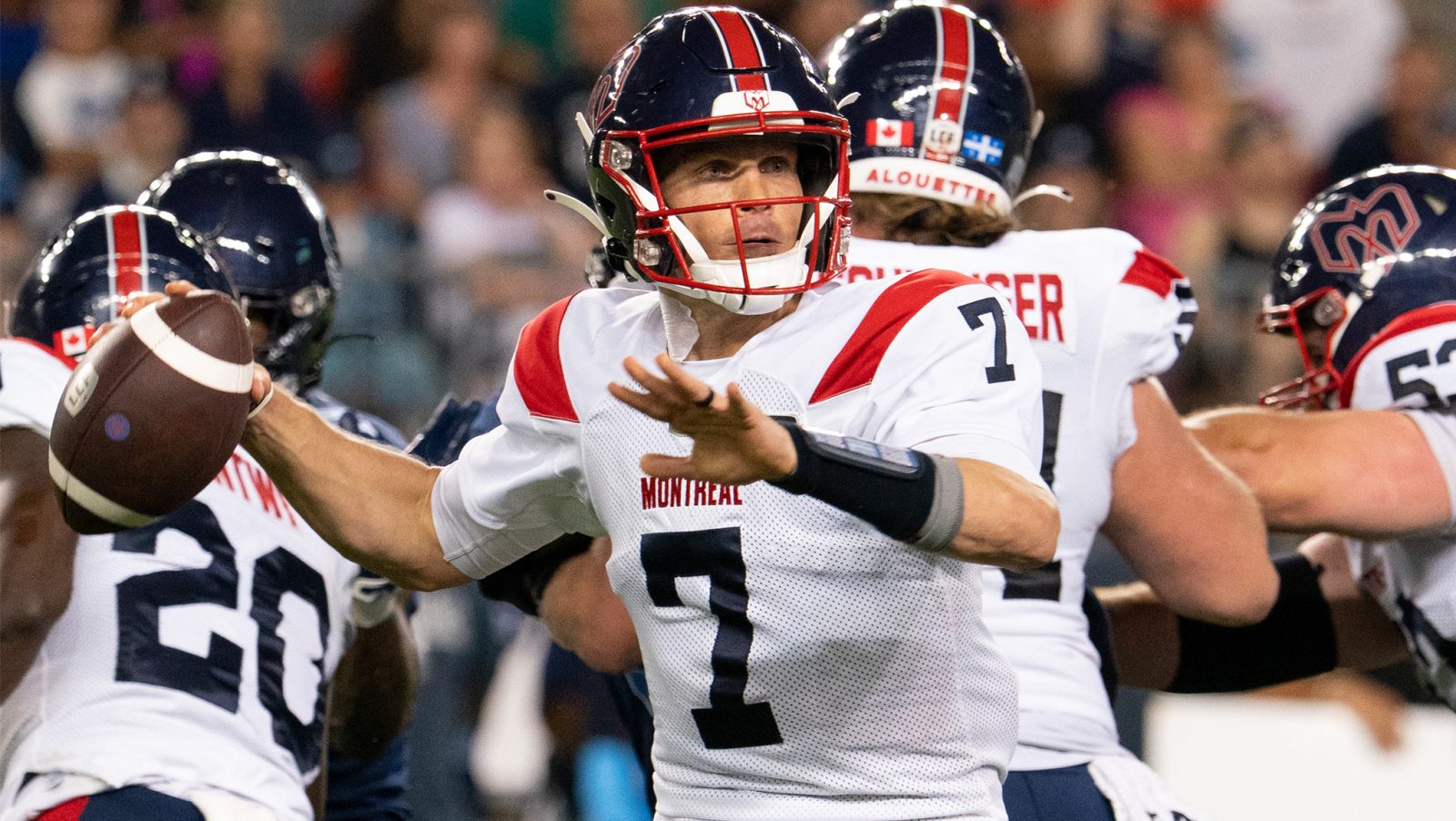 Just when you thought nothing could answer the bell to what was a crazy Week 6 in the CFL, Thursday night opened with a pair of games that came down to the final three minutes.

Winnipeg’s defence helped maintain the team’s undefeated record Friday, and a Sunday evening special in Regina saw a regional combine invitee in Enoch Penney-Laryea seal the deal as Toronto got the rare road win in Regina over a shorthanded Riders squad. 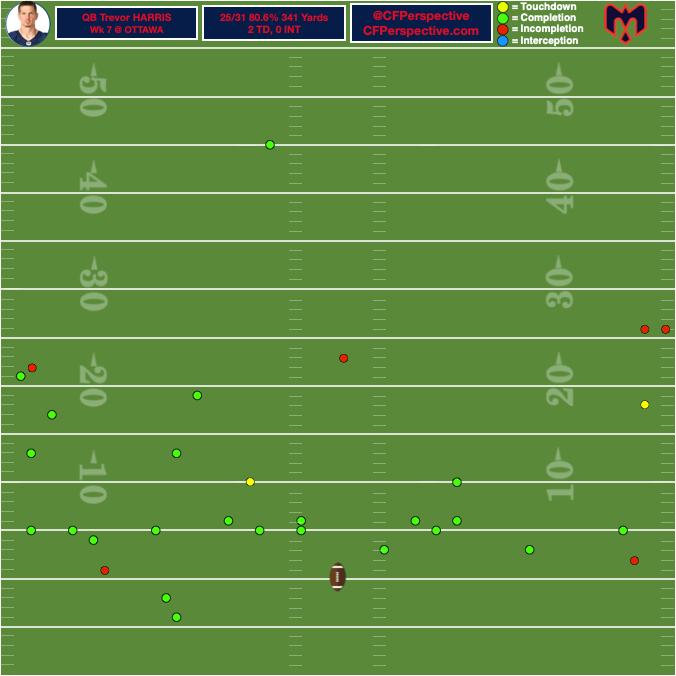 Similar to Hamilton’s Dane Evans against the REDBLACKS defence last week, you don’t think Trevor Harris is having a special game, then all of a sudden you look at the box score and he’s completed over 75% of his passes for over 300 yards!

Harris was 16/18 between 0-10 yards down the field, picking apart a linebacking group led by Avery Williams, with Patrick Levels playing his old team at SAM linebacker and young backup Adam Auclair starting at the weak side for the injured Frankie Griffin. 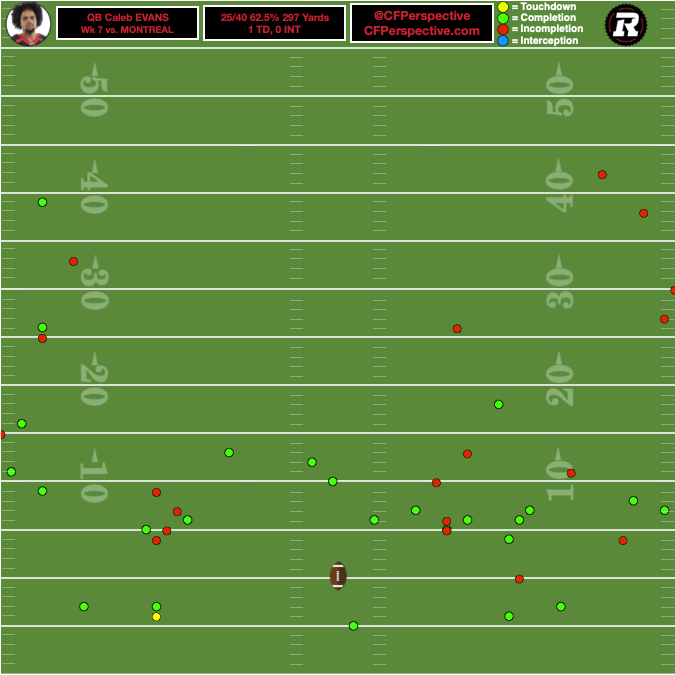 I thought Caleb Evans showed some progress against Montreal from his first start of 2022 against Hamilton, with the glaring omission of a couple air-mailed throws that were the result of poor fundamentals and mechanics as he faded away trying to find unusual ways to deliver the rock without success.

All that being said, if Darvin Adams catches that pass in the end zone we likely aren’t talking about anything more than Evans playing hero to a potential 14-point comeback in the fourth quarter. 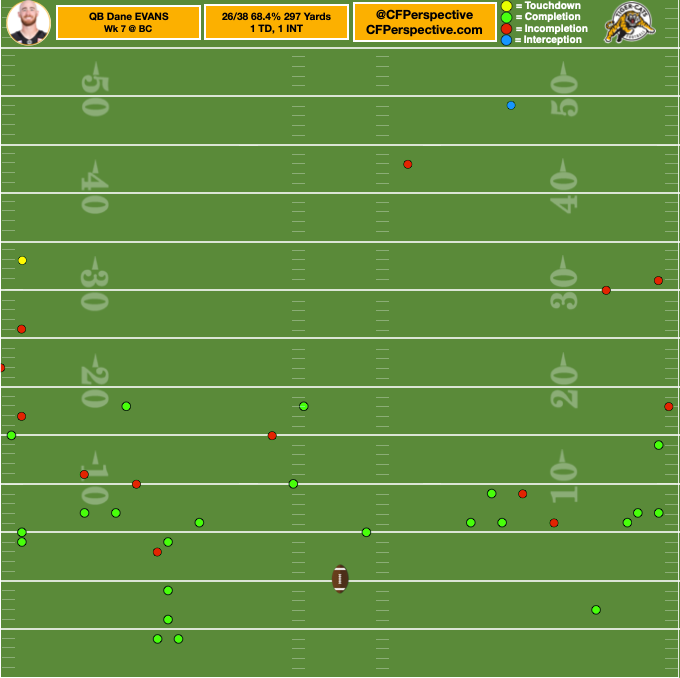 I liked Dane Evans’ game in Vancouver from this week. Evans was mixing run and pass while trying to access Bralon Addison at a higher rate than in previous weeks. 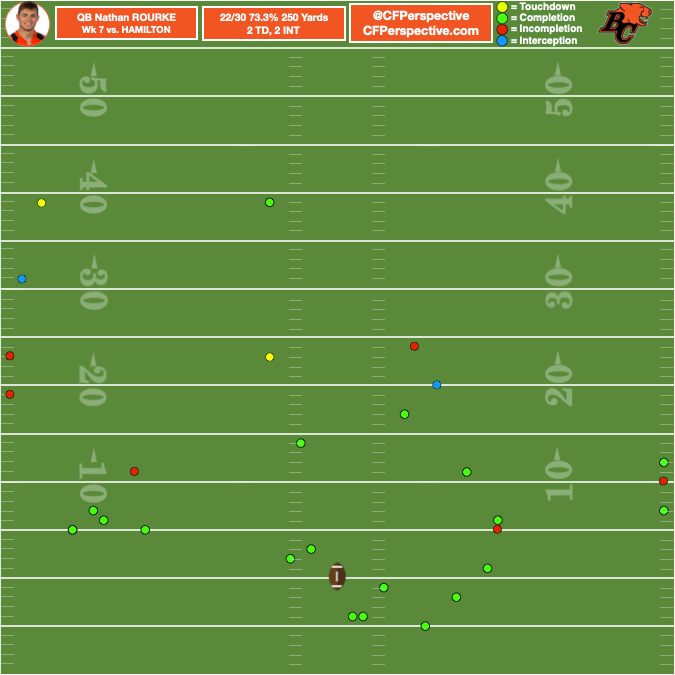 Nathan Rourke continues to make two or three throws a game that make my jaw drop with the pace and accuracy out of his hand, but does mix in the odd eyebrow raising decision as well. All of this should be expected despite the perfection label he placed on himself after the ridiculous start to 2022.

Against Hamilton, Rourke struggled to find rhythm in the intermediate throws but threw a pair of touchdowns that travelled beyond 20 yard in the air. An up and down week that once again resulted in a home win for the Lions’ young Canadian quarterback. 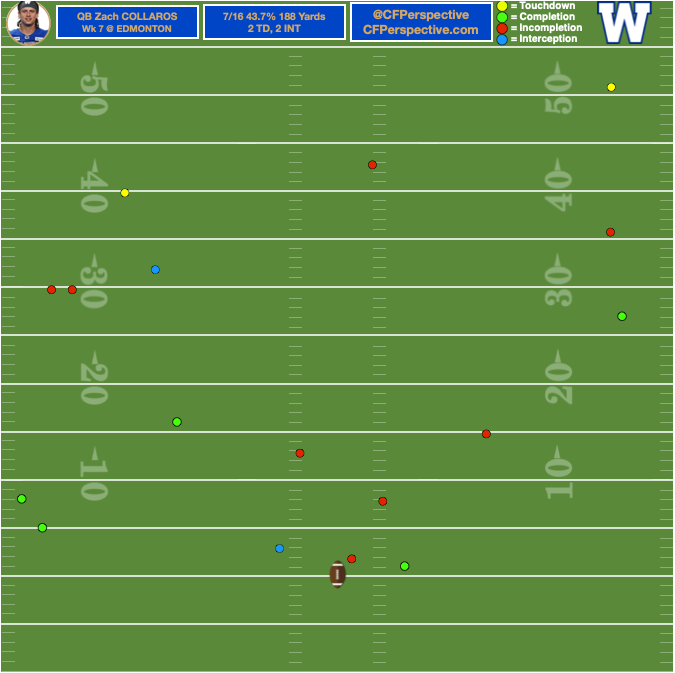 What a game for Zach Collaros.

For most of it, the numbers were surreal with just four completions heading to the fourth, a couple of interceptions mixed in and a ridiculously high average depth of target of 19.7 yards. For context the CFL average in 2022 is 9.8 yards and Collaros’ 2022 average through wk 6 was 11.1.

He was taking deep shots as receivers Dalton Schoen and Rasheed Bailey did their best to replace the lost threat of Greg Ellingson who was out with an injury. 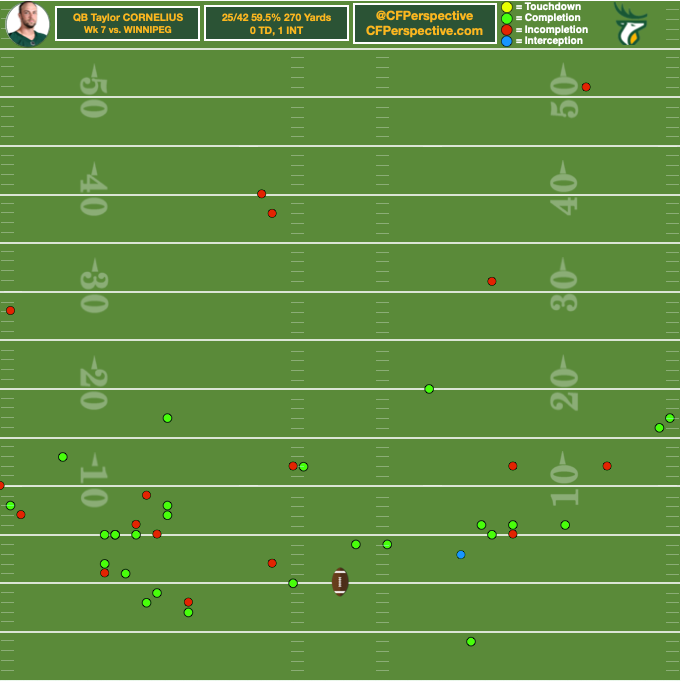 While the chart isn’t spectacular I have been much more impressed with Taylor Cornelius in 2022 than his CFL rookie season, when I saw a lot of indecision and too much relying on a strong arm to make up for lack of understanding how to massage the CFL ball down the field.

It came in a loss where he didn’t throw a touchdown but the athletic ability and calm pocket presence made for an enjoyable watch Friday night as Edmonton once again failed to break their home losing streak. 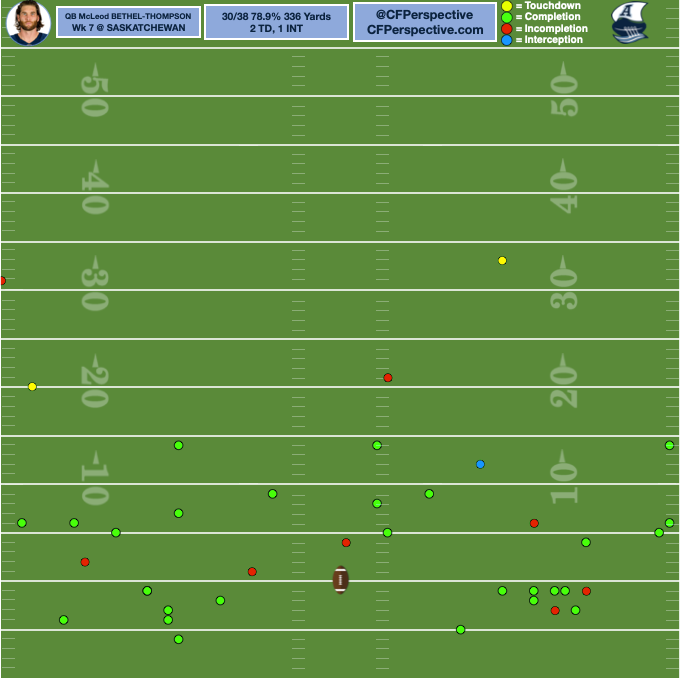 Andrew Harris was clearly the story on Sunday in Regina as he not only broke 10,000 yards career rushing, but also set a new mark for single game combined rushing and receiving touches.

Mcleod Bethel-Thompson’s chart supports that as he rarely took vertical shots with the exception of finding stand out Canadian Kurleigh Gittens Jr. on a beautiful post pattern that went to the house. 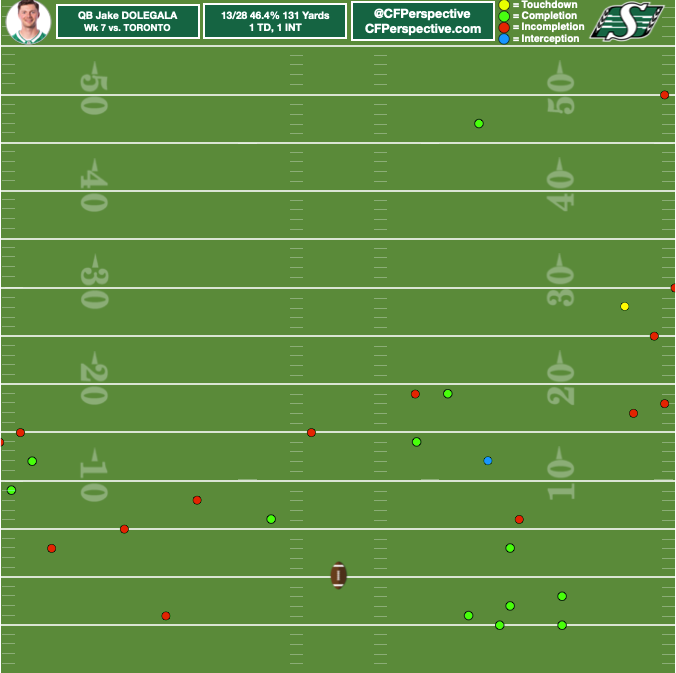 Jake Dolegala’s surprising start went just about as you’d expect for any CFL rookie with a big arm and bigger frame. Very reminiscent of Cornelius and Caleb Evans in their first few opportunities with errant throws followed by moments of natural skill and touch showing through.

Based on the short notice start and a few unknown members of the huddle working around him the Riders were lucky to keep this one as close as they did and Dolegala should be commended for his role in keeping it reasonable.