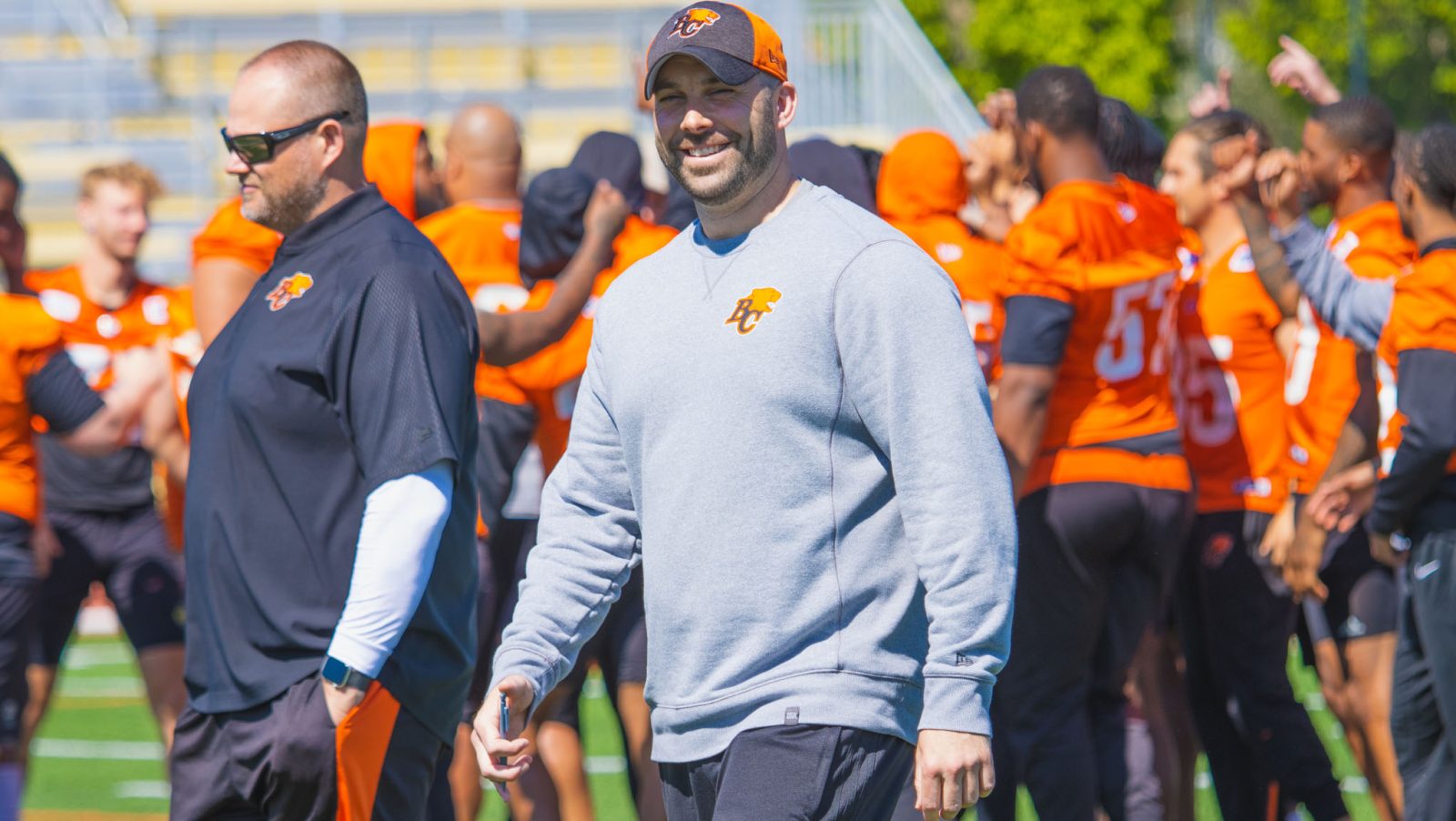 TORONTO — It turns out that whether you’re watching on TV, sitting in the stands on game day or you’re drawing up the offence for the BC Lions, we’ve all caught ourselves doing the same thing.

When the Lions opened their season with a pair of wins, a combined 103 points and 1,052 yards of offence, it wasn’t just fans and pundits trying to pump the brakes on their imaginations and expectations.

“We’ve got to do a good job of putting everything in perspective based off of our first two weeks,” Lions’ offensive coordinator Jordan Maksymic said this week, as BC gets ready to travel to Saskatchewan to face the Riders on Friday.

“We would all love to score 40 points and have 500 yards of offence every single week. But to say that’s the standard is a little bit unrealistic. So we just talk about doing everything we can preparation-wise, effort-wise, attitude-wise, energy-wise and ultimately, execution-wise when we get to game day. Just being consistent in all those areas, Nathan (Rourke) along with the rest of the offence.”

RELATED
» Power Rankings: Living in a Blue and Gold world
» Landry’s 5 takeaways from Week 7
» Watch: Lucky Whitehead gets his first TD of the season

Rourke has taken the league by storm this season, leading the Lions to a 4-1 record while throwing for 1,605 yards and a league-leading 14 touchdowns to six interceptions with a league-best efficiency rating of 123. The 24-year-old first-year starter has emerged as a (still very) early Most Outstanding Player candidate and the biggest threat so far this season to prying the award away from 2021 winner Zach Collaros.

The hype train left the station after those first couple of weeks with Rourke and the hopes for a Lions team that won its last playoff game in 2016 and hasn’t been further than a Western Final since it won the Grey Cup 10 years ago.

Maksymic admits that while he’s been blown away by Rourke’s level of play this year, it is something that the Lions saw in him as a rookie last year and in working with him through the lost 2020 season.

“Nathan and I spent a lot of time on Zoom throughout the pandemic. I felt like I knew him pretty good before I ever met him in person,” Maksymic said.

“Even on those Zooms you could really get a sense that he was a bright guy and he was going to go out there and just show what he showed in college, that he’s a gamer and he’s going to have total control of the offence. He’s going to know it inside and out, he’s going to have gone over every single scenario in his head with each given concept that we could potentially call. Has he exceeded expectations? Absolutely. But I can’t necessarily say I’m surprised because I could just tell he’s that kind of guy right from the jump.”

When Michael Reilly retired in the off-season, Lions’ co-general managers Neil McEvoy and Rick Campbell didn’t hesitate in naming Rourke their starter. With that and the signing of Michael O’Connor in free agency, the Lions doubled down with a pair of Canadian quarterbacks.

That paired the two National pivots with Maskymic, the only Canadian-born offensive coordinator in the league. It’s something that he’s appreciative of, this trio of Canadians blazing a trail of sorts, but it’s hard to fully take in when you’re in the thick of the season.

Maksymic grew up in St. Albert, Alta. and was a high school quarterback that had a unique in to the world of the CFL. His neighbour in St. Albert was former Edmonton Elks and Calgary Stampeders head coach Tom Higgins. Maksymic was friends with Higgins’ son Thomas and was extended an invite to Stampeders’ camp to work as a water boy in 2006.

That turned into a video coordinator role with the team in 2007 and 2008. After working as a graduate assistant at Northern Arizona in 2009 and 2010, Maksymic returned to the Elks for three seasons, then joined Rick Campbell’s Ottawa REDBLACKS’ staff in 2014 as running backs coach and an offensive assistant. He returned to Edmonton in 2016 and spent three seasons there as the QBs coach and pass game coordinator before taking on the OC role in 2019, before reuniting with Campbell in BC in 2020, just before the pandemic hit. 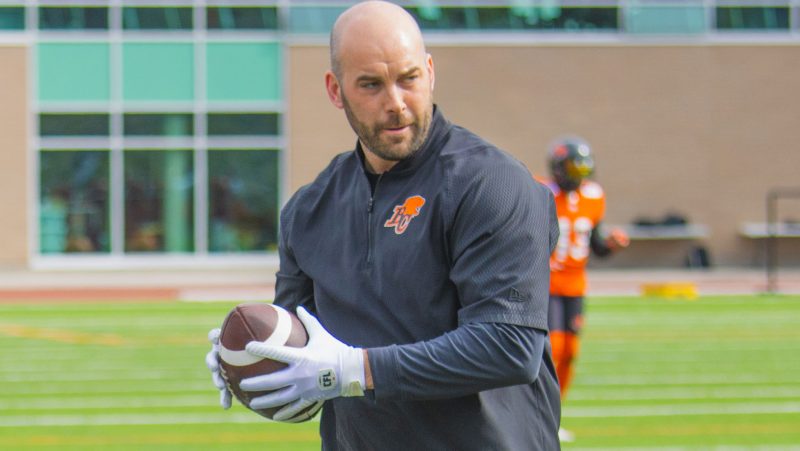 Jordan Maksymic’s intro to the CFL came from former Edmonton and Calgary coach Tom Higgins, who was a neighbour of Maksymic’s in St. Albert, Alta. (BCLions.com)

Maksymic is grateful to Higgins for opening the door for him.

“It was critical,” he said of the opportunity Higgins afforded him. “Without without Tom I’m not sitting here today, that’s for sure.

“He introduced me to the game of football and the CFL. He allowed me to be around that Edmonton team when he was was working there, both as general manager and head coach and I spent a lot of days at training camp practices and games and at the 2002 Grey Cup. Those are our memories that I’ll never forget.

“When he was in Calgary and I was done school and I was able to go down there and work for what was supposed to be a summer job and training camp…just being around it every day and around the people and around the operation of professional football, I knew at that point…I didn’t know exactly where I was going to fit or what I was going to do, but that I had to be part of professional football in some form or fashion.”

As the Lions look to improve to 5-1 this week in Saskatchewan, Maksymic knows that the season will come with its ups and downs. He’s seen a lot of different teams in his time in the CFL, though, and he knows a special one when he sees it.

“Coaches-wise, players-wise, you just kind of get that feeling. Sometimes you’re in a room and you might have a bunch of talented guys but the personalities, that chemistry doesn’t click for whatever reason. That usually spills out onto the football field, regardless of how talented you are as individuals.

“You get the opposite feeling with this group. Everyone gets along, everyone comes to work, there’s not a lot of egos. It starts with the coaching staff. It’s just a bunch of great, selfless individuals. They have fun in meetings, they have fun on the practice field and all that culminates on game days.

“I think (the players) go out there and you see, I mean, they don’t care. They don’t care whose night it is. They know somebody’s going to have a good night. One night it’s Lucky (Whitehead) and one night it’s James Butler and then it’s Hatch (Keon Hatcher) and then it’s Dominique Rhymes and Bryan Burnham when he comes back, he’ll get his.

“They just go out there and do their jobs. We let the defence dictate where the football goes and it is what it is. Everybody’s happy when when we come out on top.”