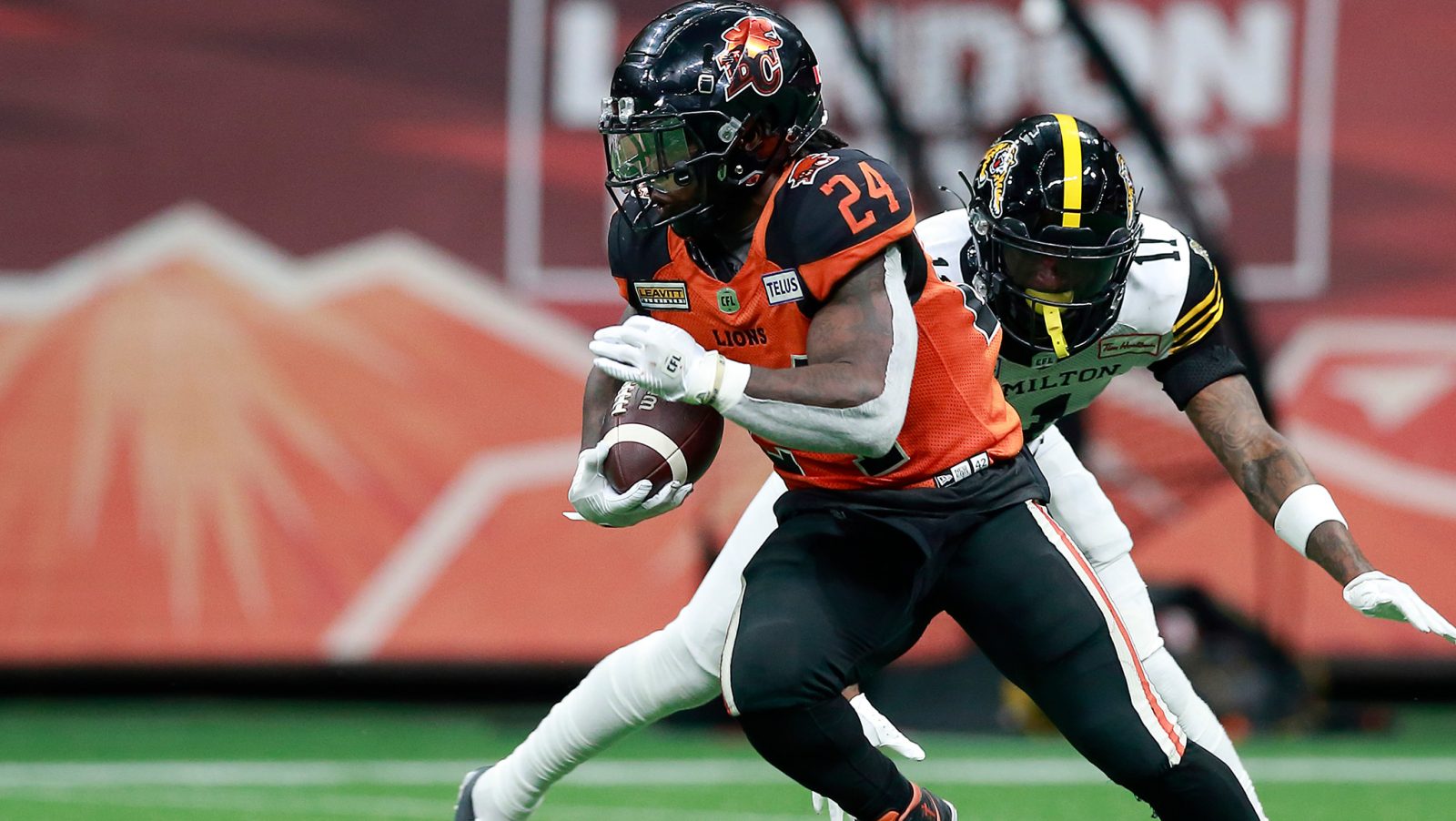 Week 7 was a stark reminder that CFL fantasy production can come from the most unlikely sources (Dominique Davis, $5,296) and that even sure bets (Jamal Morrow, $9,092) can have less than desirable performances.

The Week 8 edition of Start vs. Sit will cast a more wary eye on which players fantasy users can rely upon and those who have yet to provide trusting production thus far. This week may also include a player or two who’s long overdue for the lights to shine down upon them.

Let’s start Week 8 by rewarding consistency. Steven Dunbar Jr. has been one of the dependable players at his position, with his 19.3 fantasy points in the Week 7 loss at BC not only marking a season-high, but was also the fourth time in six games the former University of Houston pass catcher has delivered at least 15.5 fantasy points.

Dunbar shares the league lead with BC’s Dominique Rhymes ($8,107) and Winnipeg’s Dalton Schoen ($4,951) with four receiving touchdowns to go along with a solid 15.4 average yards per catch.

Hamilton’s struggles with the run have forced them to emphasize the pass more than expected, with the Tiger-Cats ranked second in the league in passing yards per game. They’ll collide against an Alouettes team that allows the lowest average yards per pass in the CFL, yet Dunbar’s consistency and penchant for finding the goal line makes him a more enticing option than fellow Hamilton receiving mates Bralon Addison ($8,939) and Tim White ($7,660).

As much as we’d like to say Jake Wieneke is overdue for a breakout, this doesn’t feel like the week to do so. Wieneke did record a season-high five catches in last week’s win over Ottawa, but he has yet to better 10.7 fantasy points per game. If there is an encouraging sign for the 2021 All-Star, the rapport between him and Trevor Harris ($8,639) seems to be brewing.

Wieneke has had his best success with Vernon Adams Jr. ($7,914) at pivot, but it doesn’t appear Adams is returning to the lineup anytime soon.

Hamilton’s pass defence frustrated BC’s Nathan Rourke ($13,412) in Week 7, intercepting him twice and held him to a modest 250 passing yards. It wouldn’t be surprising if they slow down Harris on Thursday a week after Harris averaged more than 10 yards per attempt for just the second time this season. Montreal’s passing game may not be the best route toward fantasy success this week, making Wieneke more avoidable. 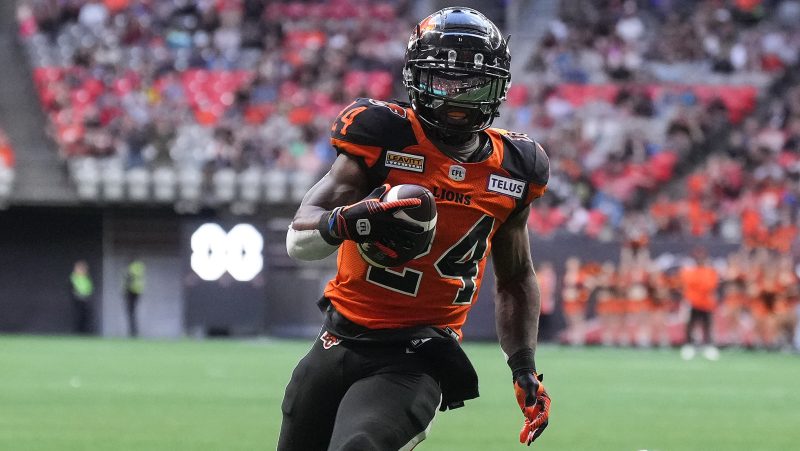 BC running back, James Butler has scored six touchdowns to start the year, and his three receiving scores lead all running backs (The Canadian Press).

One can’t help but think the Lions saw what the Argos did to the Roughriders’ league-best run defence on Sunday as Andrew Harris ($8,485) mauled them for 143 yards on his way to becoming the sixth player (and first Canadian) to cross 10,000 career rushing yards.

Don’t expect James Butler to get a combined 33 touches since BC’s game flow will be much faster, but Butler’s open field ability and dangerous presence in the passing game (three touchdown receptions) gives him great upside as the anchor of a fantasy lineup.

The Lions will also be looking to regain the quick-strike pace that was taken away from them during much of Thursday’s 17-12 win over the Tiger-Cats; BC was held to just two plays of better than 20 yards after coming into Week 7 with 17 explosive plays.

Butler did have a 37-yard run in the Week 7 victory and finished with 76 rushing yards yet feels overdue (there’s that word again) for a performance similar to his monster Week 1. Here’s betting it comes on Friday.

The Roughriders have money plays in receivers Duke Williams ($8,918) and Kian Schaffer-Baker ($6,387). That wasn’t the case on Sunday as Williams sat out a one-game suspension and Schaffer-Baker failed to catch any of the eight targets from rookie pivot Jake Dolegala ($5,000), who managed just 131 yards on his 13 completions.

The status of starting quarterback Cody Fajardo ($10,148) will be a burning question this week. Mason Fine ($7,000), who was among a host of Roughriders dealing with illness last week, is expected to return. However, until the status of Fajardo (and Fine, to a lesser extent) can be properly answered, the Saskatchewan passing game is going to be filled with a lot of uncertainty.

Dalton Schoen is a rookie only in name. With Greg Ellingson ($8,723) sidelined on Friday, Schoen was the Winnipeg passing game, catching four of Zack Collaros’ ($8,965) seven completions for 131 yards and a major in the 24-10 win over the Elks. Schoen put up 24.6 fantasy points in Week 7, the fifth time this season he’s delivered at least 11.6 points for users who’ve learned to trust the budding young star.

There’s added reason to start Schoen as he will look to bounce back from his previous outing against the Calgary Stampeders where he had just three catches for 24 yards in the 26-19 win in Week 6.

Count on better numbers for Schoen, who comes into Week 8 third behind Ottawa’s Jaelon Acklin ($7,468) and Ellingson in receiving yards with 503. He’s clearly receiver No. 2 in Winnipeg and — as last week attests — can step up and be the No. 1 when needed.

The last time we saw Kamar Jorden, the Calgary standout had a potential game-tying major bounce out of his hands into the waiting arms of Winnipeg’s Demario Houston, clinching the Bombers’ 26-19 win. The play capped off perhaps the worst game of Jorden’s career as he caught just one of his seven targets for 15 yards.

Jordan had seven catches for 109 yards in a Week 2 win over Hamilton. Since then, he’s managed just 101 yards on 12 catches (8.4 average) and has yet to score a touchdown this season. He is averaging just 10.7 yards per catch, making his 17.2 yard average in 2019 feel like light years ago. With the likes of Malik Henry ($6,487) seizing a more prominent role in the Stamps’ passing game, Jorden is beginning to feel like the odd receiver out. 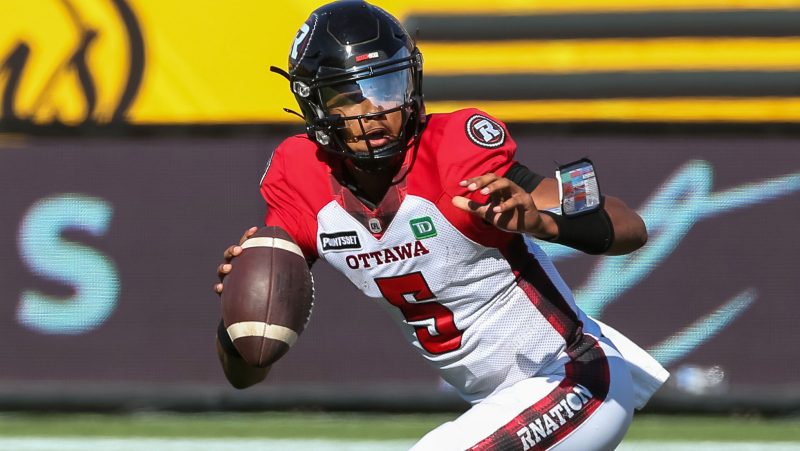 Caleb Evans produced 33.3 fantasy points in the Week 7 loss to the Alouettes, throwing for 297 yards and a major along with rushing for 52 yards and a pair of scores. In his first two starts, Evans has delivered 56.6 fantasy points and has played well enough to discourage hints of a Nick Arbuckle ($7,236) takeover in Ottawa.

Outside of Nathan Rourke, Evans has become the most potent dual threat pivot in the league. He and Jaelon Acklin have teamed up well, with Acklin crossing the 100-yard mark in each of Evans’ first two starts.

The Argonauts held the Roughriders in check on Sunday, but there is a huge difference between Jake Dolegala and Evans, who is a huge threat to put up at least 23-25 fantasy points a third straight game.

Follow along here: this is not a knock on Harris, nor is this a projection that he’ll have a massive letdown. Instead, this is more along the lines of the Argos pulling back and being mindful of Harris’ workload. Harris had 33 combined touches on Sunday, and with the summer heat pounding harder than usual, it would not be surprising if there’s less of Harris and more of rookie Daniel Adeboboye ($3,500), who hasn’t recorded a touch since Week 2.

Of Toronto’s 108 rushing attempts this season, Harris has accounted for 88, a whopping 81.4% share. If the Argos are counting on a healthy and productive Harris come November, now seems like a good time to begin the future Hall of Famer to start sharing more pieces of Toronto’s rushing pie.