Ferguson: Ticats’ defence has to steer them forward 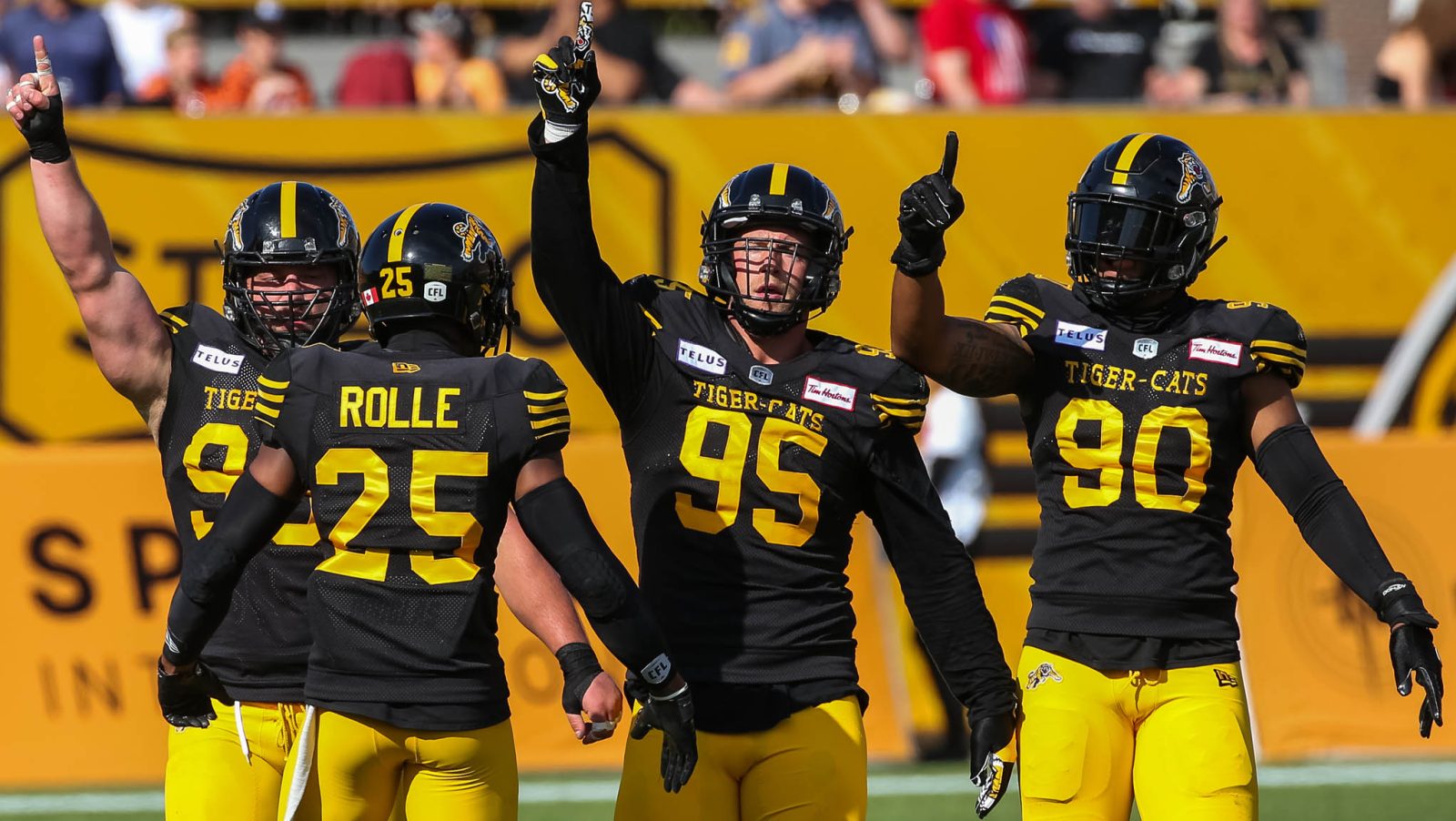 Ferguson: Ticats’ defence has to steer them forward

Tonight the Hamilton Tiger-Cats return from a Week 7 trip west to Vancouver where they had every opportunity to get the type of win that could start season long positive momentum in the win column.

Instead it was a few plays here or there that were the difference with Hamilton picking up its fifth loss of 2022, unable to get what would have officially qualified as a winning streak after their Week 6 win by the skin of an upright over Ottawa.

This has been the Tiger-Cats’ season thus far. Notwithstanding the disappointing three phase losses to Winnipeg and Saskatchewan, it’s been all about collapses to Calgary and Edmonton followed by razor thin margins of difference between wins and losses to Ottawa and BC.

At the end of the day it all results in a poor record, but a win tonight against the second place Alouettes would certainly help, as Hamilton begins a six-week stretch exclusively against Montreal or Toronto.

If the Ticats are going to come out of this month and a half still in serious playoff contention, it will have to be the work of the defence that powers their rise. No disrespect to the Black and Gold offence, which has shown moments of striking explosiveness and production. Consider Steven Dunbar Jr.’s one-handed snag against the REDBLACKS or anytime the ball seems to touch Bralon Addison’s hands. Still, the defence is the steadying force amongst this group, which also includes a seemingly revolving door on key special teams positions.

When I think about big moments that have defined Hamilton’s season so far very few of them are the fault of the defence. Yes, great offensive players or schemes can get people open in space but there have been relatively few busts in coverage, bad penalties or poor execution late.

The defence has been climbing uphill for most of the season against short fields gifted to opposing offences. Meanwhile, the Ticats’ attack struggles to protect the football despite that ball safety note being a major point of emphasis after QB Dane Evans lost the handle a couple times in Regina in Week 1.

Despite all of that, the Tiger-Cats’ defence has held its own under coordinator Mark Washington and the overseeing eye of head coach Orlondo Steinauer. To get a sense for how they’ve been able to do it, I pulled a few numbers from my game tracking that I often use to better understand the game before I step into the booth for TSN.

For every offensive snap of every game I apply a ‘production grade’ value that ranges from 0-5.

Multiply that number by 20 (to get a more round number) and place it side by side with run/pass splits and what we get is a sense for how offences are deciding to attack defences and more importantly, how effective they are at doing so. Here’s how Hamilton’s pass defence stacks up to the rest of the league. 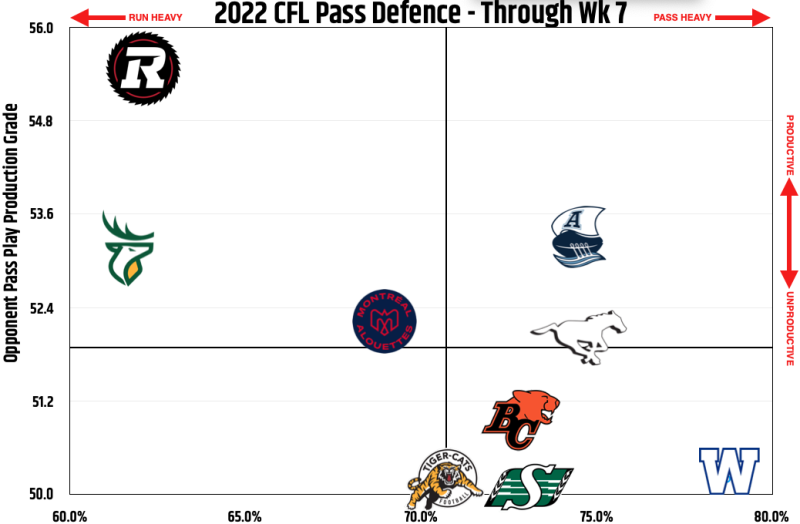 Hamilton has passes called against its defence right smack dab at the league average of just over 70 per cent. What’s important here is that they rank right next to Saskatchewan and Winnipeg — both of whom they’ve lost to — in preventing consistent offensive production on called passing plays.

Despite having a league-low 10 sacks and not creating many two-and-out drive results, Hamilton still ranks amongst the best units in the CFL against the pass as evidenced by ranking third in the CFL in opponent passing yards despite watching Bo Levi Mitchell throw it up and down the field as Calgary stormed back to win in Week 2. 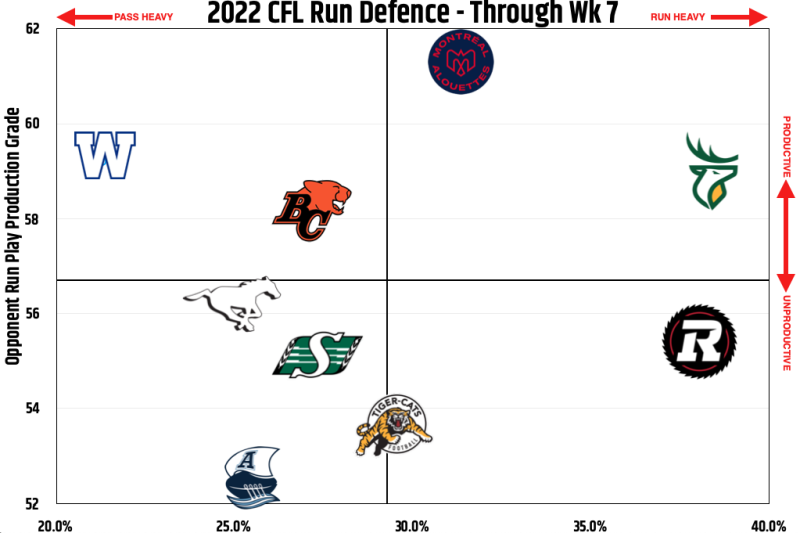 When it comes to the run, Hamilton once again is attacked right at the CFL average but has the second best snap-to-snap success rate behind only the Argonauts, who they’ll soon be seeing plenty of.

Hamilton’s defence needs to create more turnovers to offset offensive struggles. They need to physically dominate and get to the quarterback more with their intimidating front of Ted Laurent, Micah Johnson, Dylan Wynn and Julian Howsare. In the grand scheme of things, though, Hamilton’s defence has done its part.

The question now becomes how will they maintain that level against the same two opponents for six weeks straight in a stretch that will loom large on their playoff and Grey Cup aspirations.