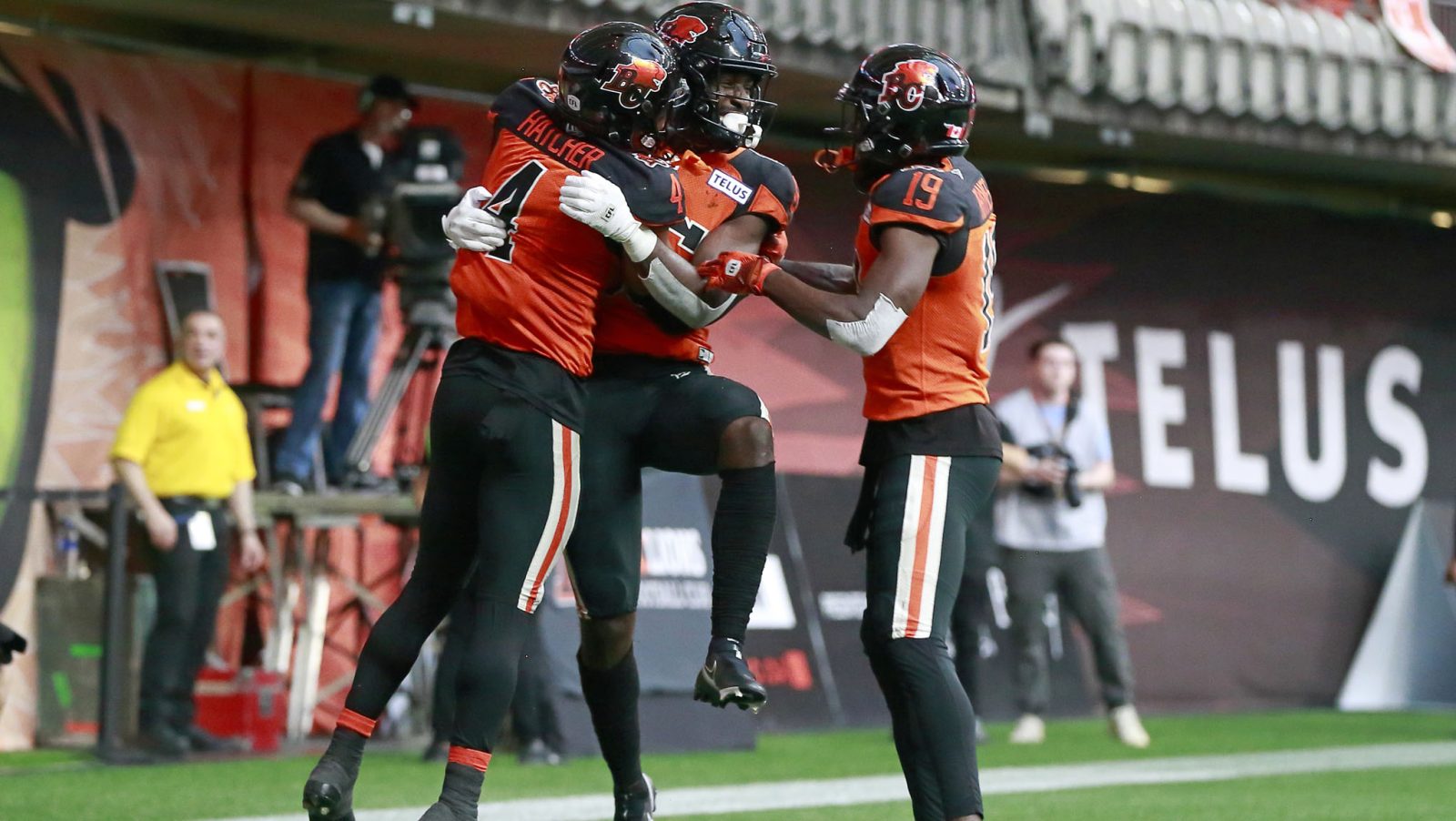 When the BC Lions lost Bryan Burnham to injury the team knew no one player could replace the veteran All-Star receiver.

Instead, the Lions have relied on their depth at the receiver position with Dominique Rhymes, Keon Hatcher, Lucky Whitehead, Keon Hatcher and Canadian Jevon Cottoy all taking turns punching holes in defensive secondaries.

“It’s most definitely a committee thing,” said Hatcher, the second-year player from Arkansas who has 22 catches for 344 yards and two touchdowns this year. “We knew when Bryan went down we had a little slack to pick up.

“We feel the guys in our room are able to do that. We can move pieces around where we need them and everything will go as smooth as possible.”

Receivers coach Jason Tucker isn’t surprised by the numbers his players have posted.

“This whole group is a good group,” said Tucker, a three-time CFL All-Star who won two Grey Cups playing seven seasons for Edmonton. “You never replace a Bryan Burnham but we have a next-man-up mentality. The next man steps up and this train keeps rolling.

“That’s the good thing about this group. They’re all capable of getting it done.” 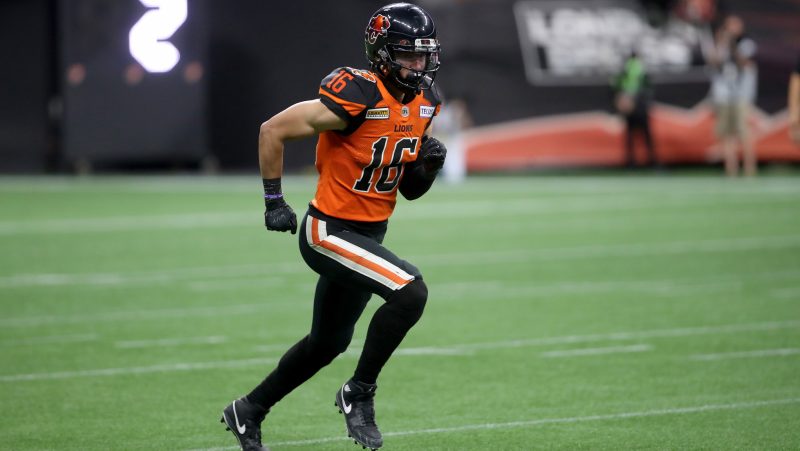 The loss of Bryan Burnham hasn’t slowed the Lions’ receiving corps. As the All-Star readies to make his return, BC’s offence is poised to get more lethal (Trevor Hagan/CFL.ca)

Burnham was put on the six-game injured list after suffering fractured ribs in the Lions 44-3 rout of the Toronto Argonauts June 25. The 32-year-old slotback was a  CFL All-Star in each of his last four seasons, having over 1,000 yards in receptions every year from 2016 to 2019 and collected 965 yards in last season’s shortened 14-game campaign.

Burnham had six catches for 66 yards and touchdown in the two games before his injury. Besides his prowess on the field, Burnham is a leader in the Lions’ dressing room.

While close to returning, Burnham won’t dress when the Lions (4-1) face the Saskatchewan Roughriders (4-3) Friday night at Mosaic Stadium.

Playing without their best receiver, the Lions also top the league by averaging 326.4 passing yards a game.

Individually, Rhymes leads BC with 24 catches for 413 yards and four touchdowns, but heading into the weekend he is ranked seventh among the league’s receivers. That is partly due to the Lions having played five games, compared to six and seven among other teams, but also because of the way quarterback Nathan Rourke has distributed the ball.

“He spreads the ball around and you have to get to one-on-one matches,” said the slotback who had a season-high 143 yards and two touchdowns in the win over Toronto. “We’re just a confident group. We feel each receiver we got is an All-Star caliber receiver.”

The elusive Whitehead has 30 receptions for 262 yards and collected his first touchdown catch in last week’s 17-12 win over the Hamilton Tiger-Cats.

Cottoy, who was born in Saint Vincent and The Grenadines but played his junior football with the Langley Rams, has 20 catches for 192 yards and two touchdowns.

Tucker said each receiver has their own superpower.

At six-foot-four, Rhymes can use his leaping ability to go high to catch passes in a crowd. Whitehead is only five-foot-10 and 177 pounds but uses his speed at the wideout position to burn defenders.

At six-foot-five and 230 pounds, Cottoy uses his wide body to create space. He can make a catch in a crowd and also throws some crushing blocks. 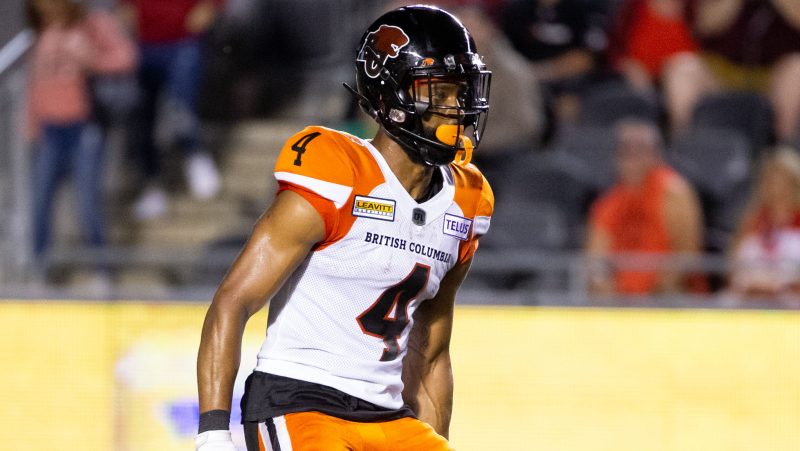 Keon Hatcher has a similar playing style to Burnham and has filled in well in the veteran receiver’s absence early this year (Chris Tanouye/CFL.ca)

Hatcher is cut from the Burnham mold. He’s a big target that runs precise routes and has good hands.

Running back James Butler has also shown his versatility by making 20 catches for 192 yards and a pair of touchdowns.

“Everyone has something different that they bring to the table and that’s what so unique about this group,” said Tucker. “You can’t say that we have three or four guys that are all the same.”

“Most definitely it puts pressure on the defence because they can’t (key) on one guy,” he said. “If you’ve got five guys out there, and all five can make a big play, it’s hard for a defensive coordinator to scheme against those guys.

“That’s what we try to do, spread the ball around and let everyone get their eats.”

Being a CFL quarterback is never easy, but for Rourke, having so many options makes his job a little less hard.

“It’s fun for me because there’s a lot less thinking and I know I don’t have to be perfect,” said the second-year quarterback who has completed 128 of 160 passes for 1,605 yards, six touchdowns and has a league-leading 123 efficiency rating.

“It’s all about spreading the ball around and making sure that defenses aren’t keying on one guy.”

The team is also more focused on winning than personal statistics.

“We understand that if we’re going to win games, a majority of the time it’s when a lot of people are touching the ball,” said Rourke.

Rourke will play his first game in Regina since he was the surprise starter in last year’s season-opening 33-29 nail-biting loss to Saskatchewan.

The Riders come into the game after suffering back-to-back losses to Toronto where they gave up 612 passing yards and four touchdowns through the air.

“Going into Mosaic is never easy,” said Rourke. “I’m expecting them to be looking at their record and kind of foaming at the mouth knowing they’re a better team.

“They are going to be a challenge. They’ve got some dudes and we’re going to have to execute at our best.”