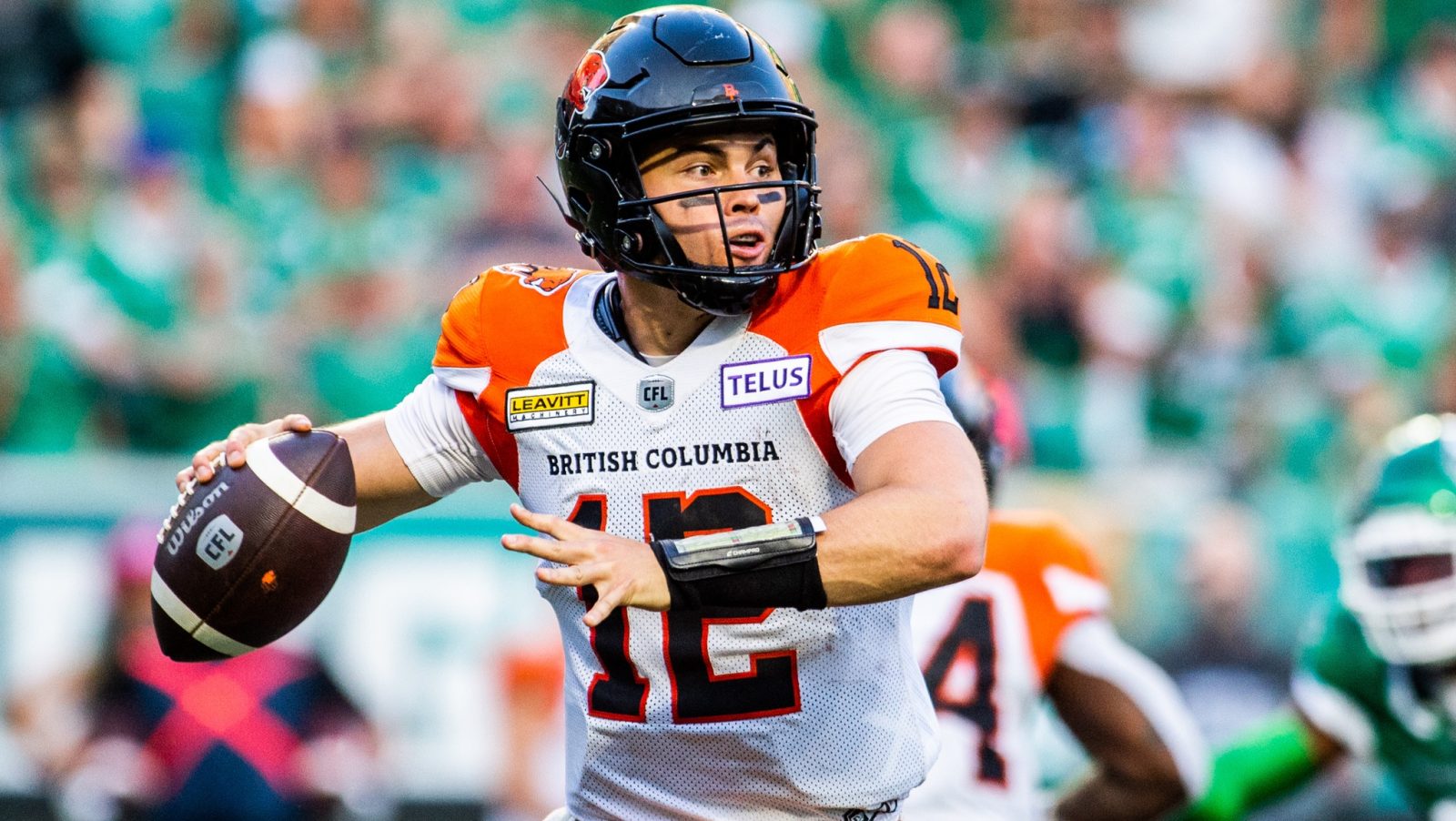 REGINA — Nathan Rourke passed for 336 yards and two touchdowns as the BC Lions rallied past the Saskatchewan Roughriders for a 32-17 road win on Friday night at Mosaic Stadium.

The Canadian quarterback completed 27 of 33 passes while also adding a rushing touchdown and 20 yards on the ground.

The Roughriders (4-4) held a 17-4 lead in the second quarter, but the Lions (5-1) stormed back with 28 unanswered points to win their second straight.

Dominique Rhymes put the Lions on top in the third quarter with a 14-yard touchdown catch, and Rourke connected with Jevon Cottoy in the end zone to extend the lead in the fourth quarter. It’s the first time BC has started a season 5-1 since 2007.

Cody Fajardo completed 18 of 27 passes for 168 yards with a touchdown and an interception in the loss.

BC’s defence racked up four sacks, and defensive back Loucheiz Purifoy helped seal the win with a late pick.

Riders defensive lineman Charleston Hughes recorded a strip-sack and tied Hall of Famer Joe Montford for fifth most sacks in CFL history with 135.

RELATED
» Box Score: Riders, Lions by the numbers
» Through the Lens: Lions at Riders
» Lions’ air attack takes down Riders
» Watch: Rhymes makes a spectacular one-handed catch for a TD
» Watch: Fumble leads to Riders first TD of the night

The Lions took a one-point lead early in the first quarter when a 74-yard punt from Stefan Flintoft went out of bounds in the end zone for a single.

The Riders took the lead with a 28-yard field goal from Brett Lauther, and their defence seized momentum by forcing a turnover on the very next play. Rourke dropped back to pass and was strip-sacked by Hughes, with fellow defensive lineman Keion Adams recovering the fumble.

Fajardo converted the turnover into points two plays later with an eight-yard touchdown pass to receiver Tevin Jones. Lauther kicked the convert to give Saskatchewan a 10-1 lead with five minutes left in the first quarter.

The Lions settled for a 16-yard field goal from Sean Whyte early in the second quarter after Saskatchewan’s defence shut down a promising drive in the red zone.

The Riders’ offence followed it up by quickly moving the ball down the field on a seven-play, 70-yard touchdown drive. Running back Jamal Morrow brought the ball into BC territory with a 28-yard run, and Fajardo moved it down to the goal line with a 16-yard pass to D’haquille “Duke” Williams.

Fajardo finished the drive with a quarterback sneak touchdown, and Lauther added the extra point to put the Riders up 17-4.

Whyte missed his first field goal of the season on a 38-yard attempt later in the second quarter, but Mario Alford was barely able to return the missed kick out of the end zone for Saskatchewan. The bad field position ultimately led to the Riders giving up a safety, as defensive back Marcus Sayles tackled Morrow behind the goal line.

The Riders conceded another single in the final minutes of the second quarter after a dead ball was declared in the end zone on a 75-yard punt from Flintoft, leaving the Riders with a 10-point lead.

The Lions cut into the lead again with a touchdown just before halftime, as Rourke engineered a seven-play, 73-yard drive in under two minutes. Rourke stretched the field with a 40-yard pass to Hatcher, and he moved the chains three more times before capping the drive off with a quarterback sneak touchdown. Whyte’s convert cut Saskatchewan’s lead down to just three points at halftime.

BC completed the comeback with a touchdown drive midway through the third quarter, as Rourke completed five straight passes before connecting with Rhymes for the go-ahead touchdown. Rhymes made a one-handed grab before stretching the ball out over the goal line, and Whyte added the extra point to give the Lions a 21-17 lead.

Cottoy beat defensive back Amari Henderson in tight coverage over the middle to catch Rourke’s second touchdown pass of the night. Purifoy helped close things out by picking off Fajardo with under five minutes left in the game, and BC added another single when Whyte’s 46-yard field goal attempt went wide and was conceded in the end zone.