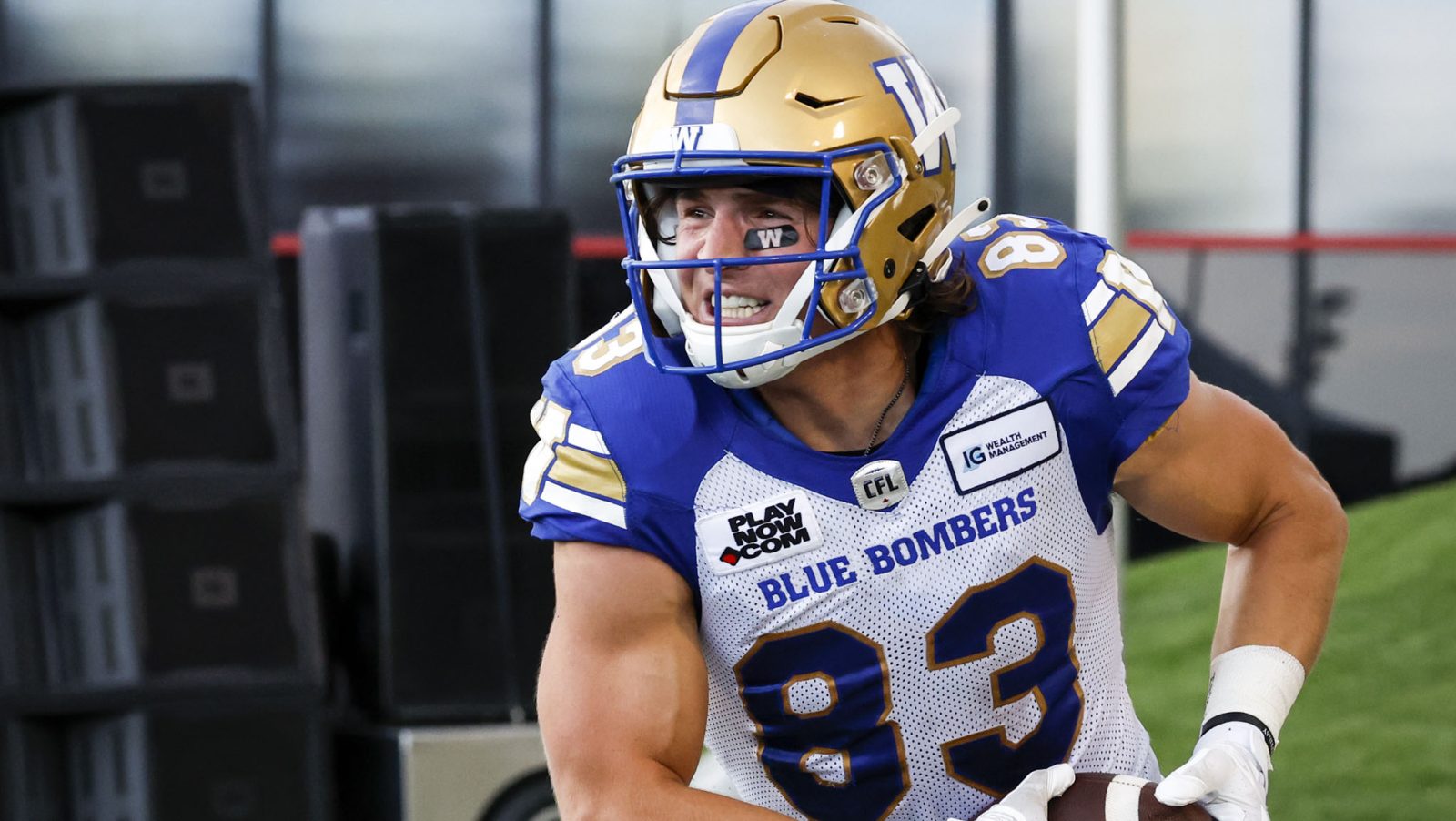 CALGARY — In a highly anticipated matchup the Winnipeg Blue Bombers managed to extend their undefeated streak to eight wins to start the 2022 season, as they bested the division rival Calgary Stampeders.

Winnipeg quarterback Zach Collaros led his team to a 35-28 win over the Stamps with an entrancing performance from the pocket. The Bombers’ quarterback for completed 22 of his 33 passing attempts, while throwing 270 yards and four touchdowns in the win on Saturday night.

Rookie receiever, Dalton Schoen had yet another explosive game, reeling in four passes for a team-high 80 receiving yards and two touchdowns.

In his return to action, Nic Demski provided a set of sure hands and production when it was needed most as he caught a team-high seven passes for 69 yards and two touchdowns in the win over Calgary.

Running back Brady Oliveira had his best game on the season, with a tough performance on the ground Oliveira rushed for a season high 110 yards on 15 carries, averaging 7.3 yards per carry in the win.

The Calgary Stampeders opened the game with their offence on the field, and looked determined to exact their revenge on the Bombers for handing the Stamps a loss in Week 6.

Bo Levi Mitchell and the Stampeders offence found themselves in scoring position after just six plays, however back-to-back incompletions forced by the Winnipeg defence halted the drive and forced the Stamps to try for a field goal.

Calgary would rely on the veteran leg of Rene Paredes, who split the uprights on a 25-yard field try for the games opening points.

The Stamps continued to show their teeth early in the game, as their defence forced two straight incompletions from Winnipeg’s Zach Collaros, forcing the Bombers off the field in just two plays on their opening drive.

Calgary continued to work the ground game, as Ka’Deem Carey opened the team’s second possession with a 23-yard run. Mitchell followed up the run with a big play of his own, finding Malik Henry for a 19-yard pick up as the Stamps worked their way inside the Winnipeg 30-yard line.

However, the Bomber defence again managed to bend, but not break as they forced Calgary’s Paredes to try for a 38-yard field goal. The Stamps kicker was good from long-range, giving his team a 6-0 lead midway through the first quarter.

With their second drive of the game, Winnipeg put the ball in hands of Brady Oliveira, who’s 16-yard rush and nine-yard reception helped his team inside of the Calgary 15-yard line.

On the goal line, Collaros rolled out on a play-action and found an open Nic Demski in the end zone for the touchdown. The score from Demski was his first of the new season as he helped the Bombers take a one-point lead before the end of the first quarter.

Paredes continued to be relied on as a source of offensive production for the Stamps. To open the second quarter, Paredes was again called on to attempt a long field goal.

The kick from Paredes split the uprights, as the 53-yarder helped the Stamps to regain 9-7 lead. The 53-yard strike also marks the longest made field goal of Paredes’ career.

It took Collaros and the Bombers offence just six plays to drive down the field and manage a response to the Calgary score.

With the ball in scoring range, Collaros dropped back in the pocket and found Demski with a 13-yard pass. The Winnipeg pass-catcher muscled his way into the end zone for his second touchdown of the game, giving the Bombers a five point lead.

Paredes remained the lone point-getter for the Stamps as the kicker converted a 38-yard field goal attempt for his fourth make of the night, accounting for all 12 of his team’s points as the Stamps cut the Winnipeg lead to just two.

With under a minute remaining in the second quarter, Winnipeg’s Marc Liegghio converted a a 12-yard field goal to help his team to a 17-12 lead to end the first half of play.

After a defensive back-and-forth between the team’s on the opening two drives of the new half. Calgary’s Carey got the offence ignited as he broke free for a 31-yard run. Following the big gain form Carey, Mitchell completed a 23-yard pass to Reggie Begelton to help his team inside Winnipeg 15-yard line.

Two-yards out, the Stamps gave the ball to Carey who punched in the score, to give Calgary their first touchdown of the game and the lead.

Calgary would opt to leave their offence on the field and attempt the two-point conversion to extend their lead to three. Mitchell pinned a ball on Begelton, however he couldn’t hold onto the pass through contact as the Stampeders assumed a one-point lead.

Winnipeg would waste no time in responding to the Calgary score. Collaros engineered a five play 81-yard drive that ended with a 26-yard touchdown pass to rookie sensation Schoen for his fifth receiving touchdown of the season. 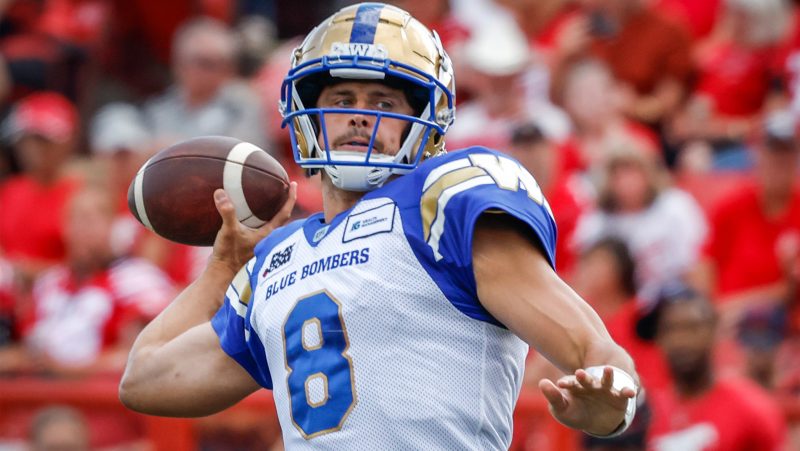 Zach Collaros led the Bombers through an offensive slugfest of a night against the Stampeders, throwing for four touchdowns on the night (The Canadian Press)

The offensive battle continued well into the third quarter, Calgary showed no signs of deflation after the Winnipeg score. Mitchell completed three long passes to put his team near the Bombers’ goal line.

Carey was again given the opportunity to convert the short-yardage score, and didn’t waste the opportunity as he plunged into the end zone for his second touchdown of the game, giving Calgary a 25-24 lead at the end of the third quarter.

The Bombers offence would be forced off the field with their first drive of the final quarter. However, Winnipeg would still manage points as Liegghio recorded a rouge on a 60-yard punt, tying the game 25-25.

Midway through the final frame the Stampeders would manage to break the deadlock. Mitchell and the Stamps offence looked to be in good field position to score, but an incompletion just out of reach for Begelton would force Calgary to try for a field goal.

Paredes remained clutch, as he had shown to be throughout the game, connecting from 33 yards out to give the Stamps a three point lead.

With less than six minutes remaining in the game, Collaros led his team down the field for a seven-play scoring drive that was ended with a 25-yard touchdown pass falling into the hands of Schoen, marking his second multi-touchdown game of the season.

The Winnipeg defence came up with a stop when the team needed it most late in the game. Defensive back Nick Hallett broke up a pass on second down, forcing the Stamps to punt the ball away with just under three minutes to go.

The Bombers would manage another score, as Liegghio converted a 40-yard attempt to help Winnipeg keep their undefeated record in tact.

Looking ahead to next week the Blue Bombers will put their win streak on the line as they will play on the road against the Montreal Alouettes, while Stampeders will be travelling east to take on the Ottawa REBLACKS.