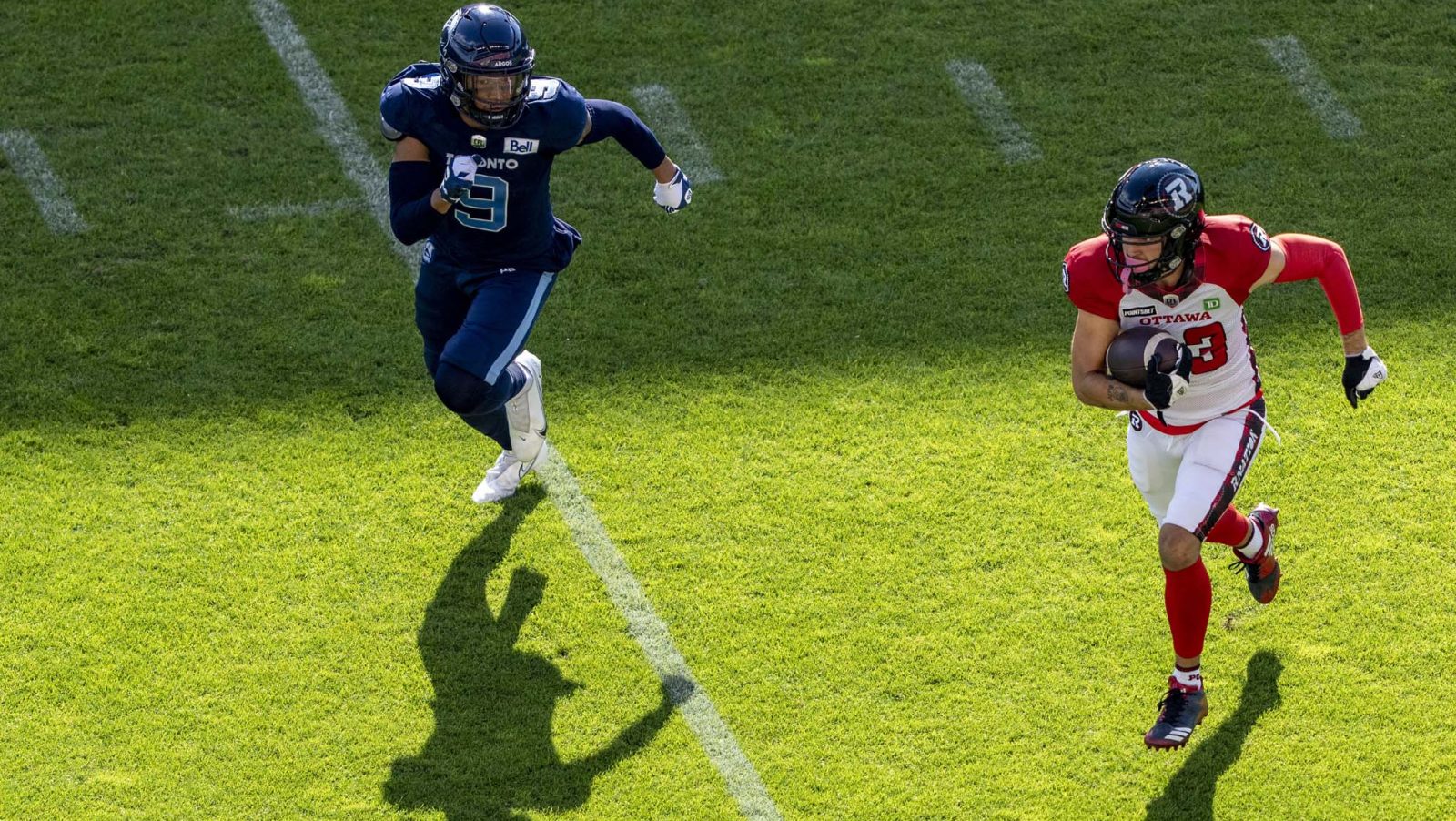 Hello, everyone. Shortly before 8 p.m. on Sunday night, meteorologists in the nation’s capital observed an incredible phenomenon. A sudden gust of hurricane-force wind ripped through the valley, causing white caps on the Rideau Canal and blackening the skies above with millions of rooftop shingles torn from houses across the city of Ottawa. Hey, I heard one report of a car being overturned by the wind. An insanely powerful squall? A micro-burst? No. Just every REDBLACKS fan in the National Capital Region exhaling at the same time.

Here are the Week 8 takeaways.

SEEMS LIKE EXTRA TABLET TIME CAN REALLY PAY OFF

The Toronto Argonauts put together a 15-play, 4:40 drive right near the end of the first half of their game against Ottawa, capping it with a field goal that gave them a seven-point lead and just 55 seconds left until the break. It looked like they were taking control of things at that point and, yikes, the REDBLACKS were on their way to another loss.

But after some extended time on the bench, Ottawa quarterback Caleb Evans drove his team from their own 40 and into the Argos’ end zone in a five-play, 70-yard drive that took all of 34 seconds. Evans went 4-for-4 on the drive, for 66 yards, including a 30-yard touchdown strike to Jaelon Acklin that came off a nifty little escape from a collapsing pocket by the young quarterback who then launched a deep one while on the run.

Looks like he’s getting it. Receiver Jaelon Acklin is doing receiver Jaelon Acklin things (does anyone enjoy playing football as much as he does?). The defence continues to look increasingly impressive and the kicking game is money. Are the Ottawa REDBLACKS about to go streaking?

In the other direction?

BONUS TAKEAWAY: Don’t throw a guy’s shoe after you’ve tackled him. Do not. Do not throw that shoe.

The Winnipeg Blue Bombers’ running game entered Week 7 as the league’s worst, averaging a meagre 3.8 yards per carry. And running back Brady Oliveira came into the game with an even more emaciated number, averaging 3.4 yards on his 75 carries.

Something changed, big time, for the Bombers and for Oliveira, who rushed for 110 yards on 15 carries against Calgary. That works out to an average of 7.3 yards per run.

The reason for the big turnabout? “I think I really just stopped worrying about hitting the big play,” Oliveira told TSN afterward. He added that some of his teammates had been suggesting that he get back to being the kind of runner he’s been in the past, hard and physical instead of fancy-shmancy.

“Ever since then I’ve just started being Brady and started to run like Brady,” said, um, Brady. “It felt really good. Great for my confidence.”

Getting back to more of his old self was the key for Brady Oliveira.

Brady just needed to be Brady.

BONUS TAKEAWAY: “Those guards tonight were opening up some big holes,” said Oliveira of his success. Well, yeah, there’s that too.

THAT GUY? THAT GUY’S A GLUE GUY

The 2021 CFL All-Star hadn’t played a down of football this season when he made his 2022 debut for the Ticats against Montreal on Thursday night and he didn’t look the least bit rusty. Quite the opposite, actually.

With five tackles and three knockdowns, Brooks was all over the field in the Ticats’ 24-17 win, picking up where he’d left off in 2021 and that is as one of the most-feared defensive backs in the great northern league. He seems to be more than that, though. Some guys can really pull a secondary together with their presence and play. A glue guy. Brooks is that.

Is it just my imagination? Did the Hamilton secondary play faster and more fiercely in this game? The unit had 11 knockdowns, with Ciante Evans leading the way with four. And it’s 12 knockdowns if you want to include the SAM linebacker (Kameron Kelly) as a DB, which some do.

That Hamilton secondary is jammed with great pieces. Now it has the glue that holds it all tightly together.

BONUS TAKEAWAY: I think Dylan Wynn is back to a hundred per cent, don’t you?

IT’S ALL IN THE FEET, BABE

Throughout history there have been men who could mesmerize the masses with their stunning dance moves. Fred Astaire. Michael Jackson. Bruno Mars. Me at every wedding reception I’ve ever attended.

In Week 8, both Nathan Rourke and Zach Collaros rebounded from very blah Week 7 performances with dominating ones, and they each showed off their terrific footwork in order to get it done. Sure, their arms get all the attention — Rourke threw for 336 yards and 2 touchdowns in BC’s win over Saskatchewan while Collaros threw for 270 and 4 touchdowns in Winnipeg’s victory against Calgary — but it was their tap-tap-tap dancing feet that allowed that to happen.

TSN analyst Matt Dunigan — who ought to know — was effusive in his praise of Rourke’s footwork in and out of the pocket, with the rookie setting and re-setting those feet time and time again in order to deliver his darts effectively. Collaros showed off his nifty shifting as well, and serving notice that he is still perhaps the most dangerous passer in the CFL when the pocket is moved either by design or by ad-libbing necessity.

BONUS TAKEAWAY: My go-to crowd-pleaser at any wedding reception is ‘the running man’ while Adam Ant’s ‘Goody Two Shoes’ is playing.

PRESSURE IS BUILDING IN SASKY

Words like “fragility,” “discipline,” and “Panic button” were in evidence in the questions asked of Saskatchewan coach Craig Dickenson during his post-game media conference following the team’s loss to BC.

There was also some invocation of bringing in some new players during the Roughriders’ upcoming bye week. When you hear those kinds of things, you know that restlessness is gaining momentum.

Dickenson took all the queries and comments in stride, and advised anyone who is advocating for major changes to his 4-4 team to “just hang tight.”

“I think we’ve still got a good football team,” said Dickenson in the wake of a third straight loss. “I think right now our confidence is down.”

Dickenson says he’ll advise his players to re-connect with their families during the off week and to take the time to heal their bodies and come back ready to leave the first eight games behind.

They say that a change is as good as a rest. The question for the Roughriders: Is the opposite true as well?

AND FINALLY… I wondered why Dalton Schoen wanted to keep the ball from his second touchdown on Saturday night. But then, he looked into a camera and apologized to a buddy for not being able to attend his bachelor party because he was, you know, catching touchdown passes in a professional football league. Looks like somebody’s getting a game-used ball for a wedding gift.