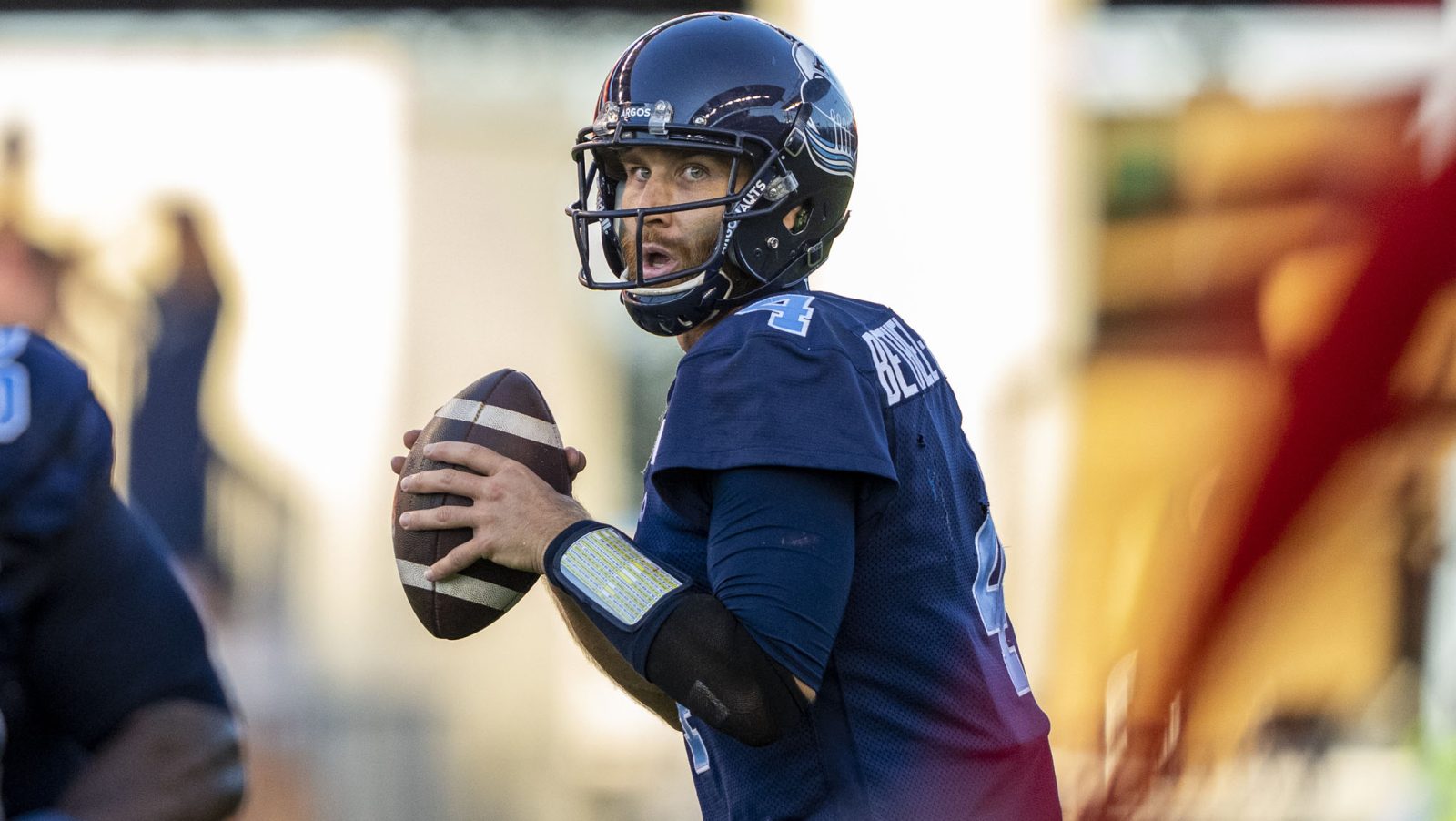 In Week 8 of the CFL season we saw growth from passers like Caleb Evans, a battle between two of the game’s best in Bo Levi Mitchell and Zach Collaros and the continually evolving two quarterback situation in Hamilton with Dane Evans and Matthew Shiltz splitting more reps than any previous game.

Let’s dive into the numbers and how their weekend played out as all CFL quarterbacks combined for a stellar 12 touchdowns to just one interception coming from the right hand of Riders’ QB Cody Fajardo in desperation on a third-and-11 force. 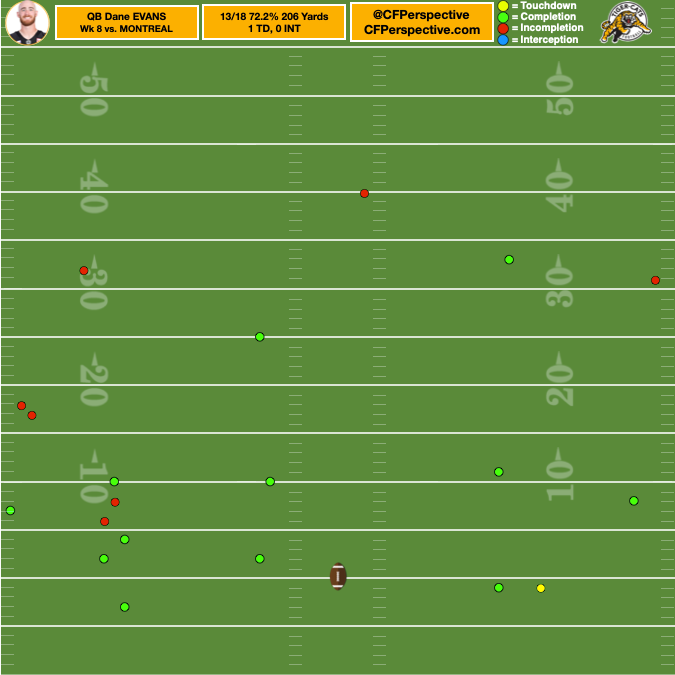 Evans barely missed a seam throw to Don Jackson that could have opened the game up against Montreal. His only touchdown came on a quick screen to Steven Dunbar Jr., who did the rest on his way to one of the longest yards after catch touchdowns we’ve seen in 2022.

All in, I thought Evans did well to stay in rhythm despite splitting significant reps with Shiltz and made most of the throws placed in front of him. Only a deep shot down the left sideline where Dunbar was left one-on-one made me feel as though Evans had left something on the table. 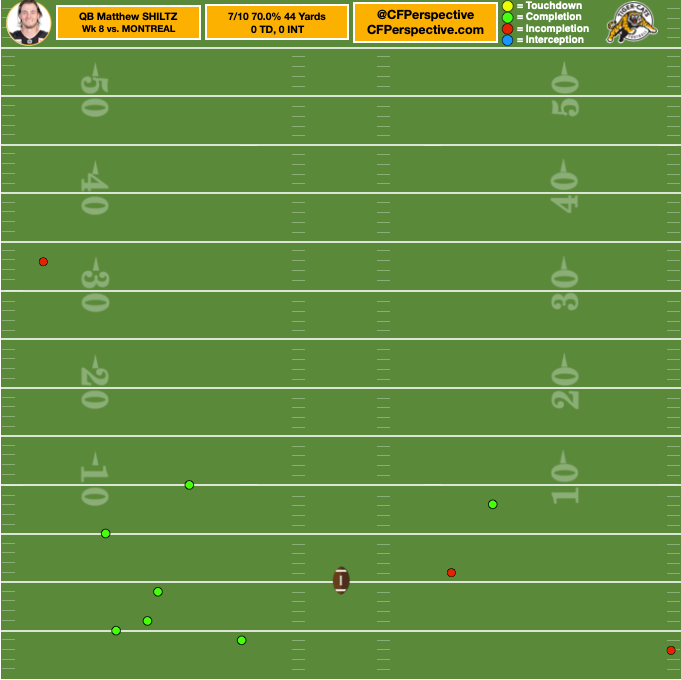 On his first play from scrimmage, Shiltz took off on a called QB run and danced for 30 yards, setting the tone for his involvement against his old club Montreal. Finishing 7-10 for just 44-yards, his passing influence on the game wasn’t sizable but he did put the ball in smart places. 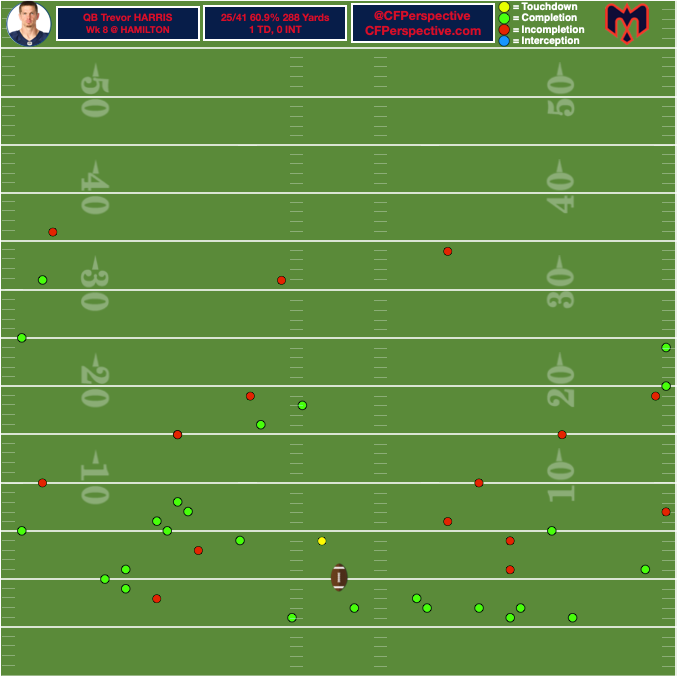 Harris didn’t get the win on Thursday in Hamilton, despite battling back in the final quarter and running for a first down to set up the offence in striking territory to tie on the game’s final play before being pulled by the injury spotter.

He really leaned on Eugene Lewis (15 targets) in this one and why not, as Lewis made at least three catches for my money that anyone not named Lawler, Ellingson, Duke or Rhymes could right now. 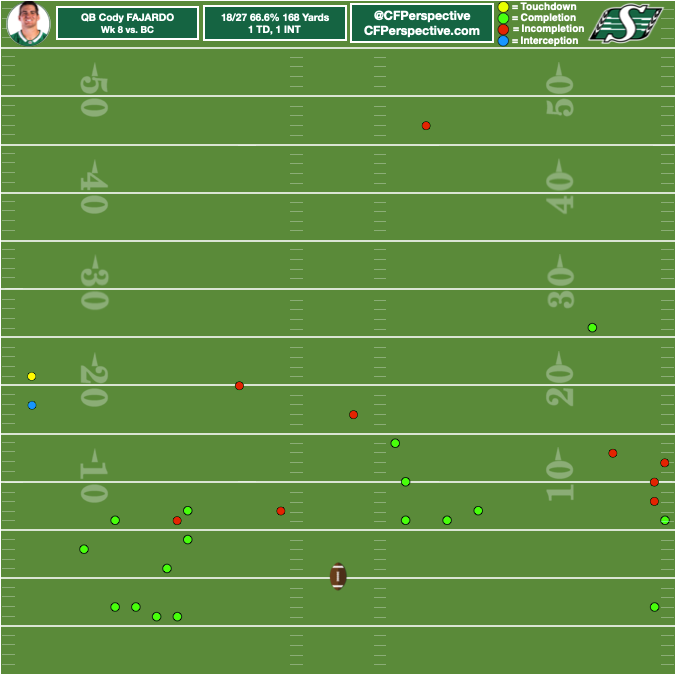 Cody Fajardo and offensive coordinator Jason Maas opened it up this week when it came to formations used. Through the first seven weeks of 2022, the Riders’ offence has gone empty (3×3, 4×2, 5×1) on just 4.2 per cent of its offensive snaps. In Week 8 against BC that number was 15.5 per cent, as Saskatchewan welcomed back what is almost their full plethora of pass catching options after a brush with COVID and Duke Williams’ one-game suspension last week held several players out. 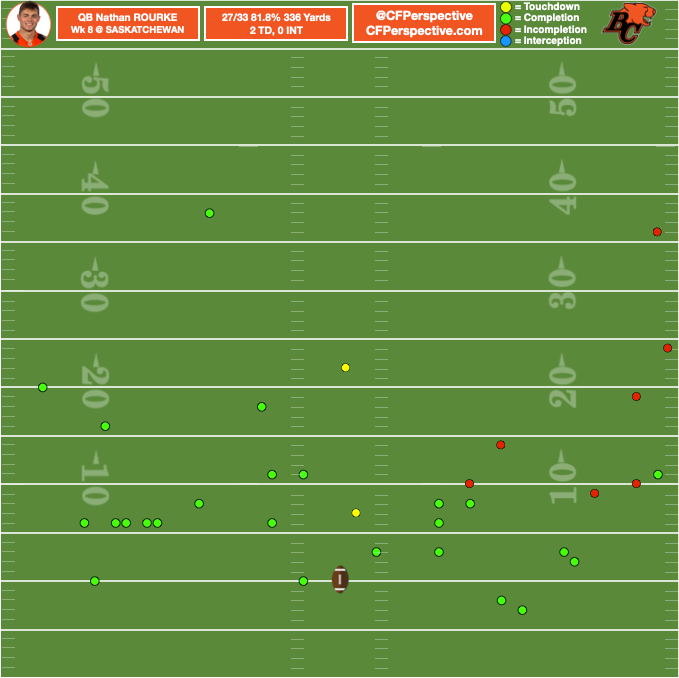 Nathan Rourke once again returned to above 80 per cent completion rate but this game is a great example of how creating and studying the target charts can educate us on how the game played out.

Of the seven incompletions I have on Rourke last week, all were to the right and six of the seven snaps were taken from the right hash. What that means is ALL incompletions were into the boundary for Rourke against Saskatchewan’s defence. That’s a part of the field which primarily consists of Larry Dean, Rolan Milligan and Nick Marshall. Credit where credit is due, but it still wasn’t enough to slow down Rourke and the Lions, who thundered back to take the big road win in Regina. 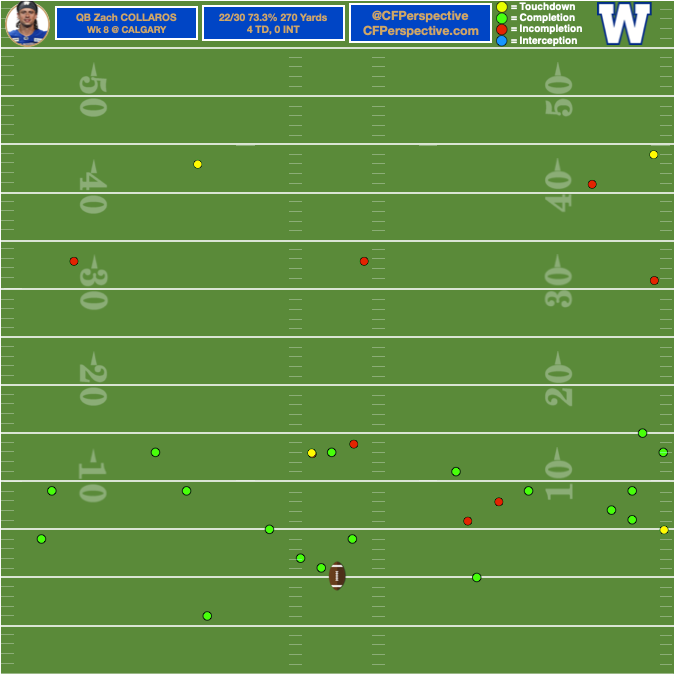 Bow to your king for yet another week. Collaros threw four touchdowns, two to newcomer Dalton Schoen, who had five scores in all of July to lead all receivers and another two to Nic Demski, who returned from injury.

In control at the line of scrimmage, Collaros simply reads and responds with precision while finding that trademark playmaking ability when needed. 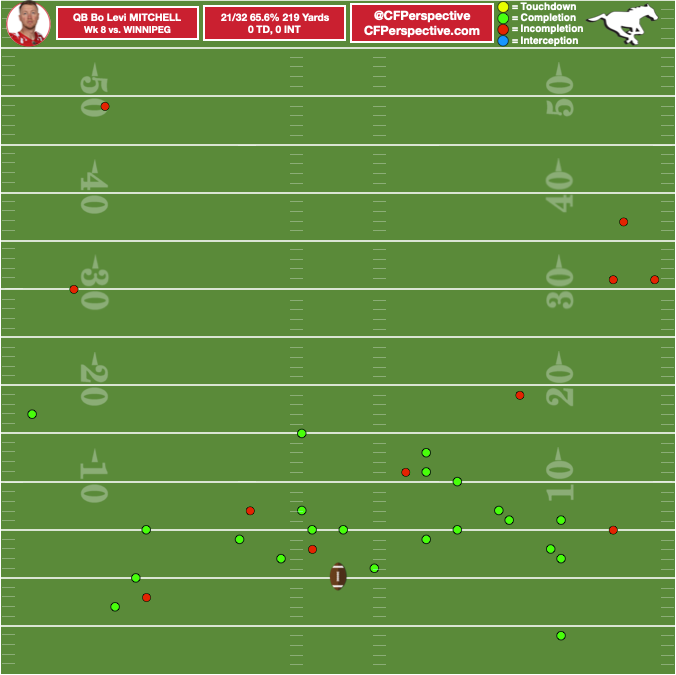 Of all nine target charts compiled this week, Bo Levi Mitchell’s surprised me the most. With only one completion beyond 15 air yards and the majority of his work centering around the hashes — an area Bo usually throws to less than anyone — he was visibly frustrated with some drops and minimal misses but I expect him to put on a show Friday night in Ottawa. 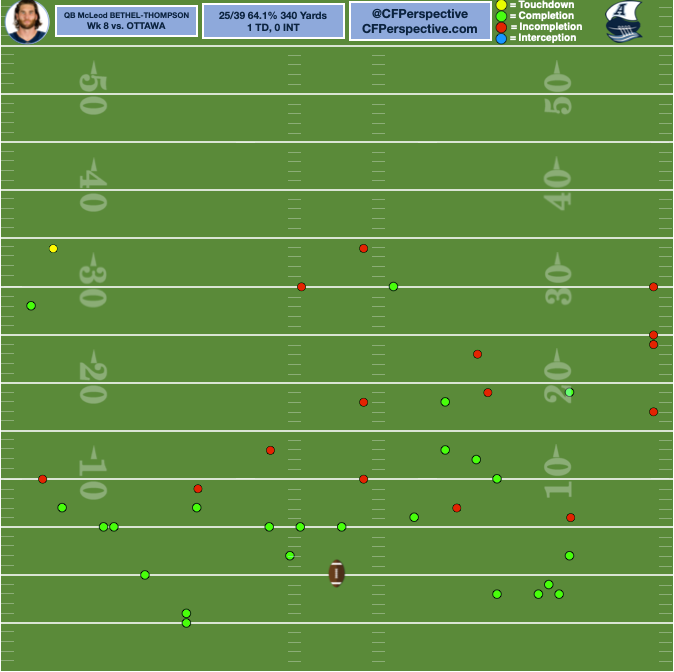 The Argos are a conundrum. I haven’t had great confidence in their wins and McLeod Bethel-Thompson’s play so far in 2022, and in typical fashion he made a variety of special throws, while missing some key second-down completions that were ripe for the taking.

Toronto just hasn’t played much football in 2022, with two bye weeks already behind them. With four of their next five games against the tough Ticats’ defence I think we’ll have a much better sense for what this year’s Argos offence is about by Labour Day. 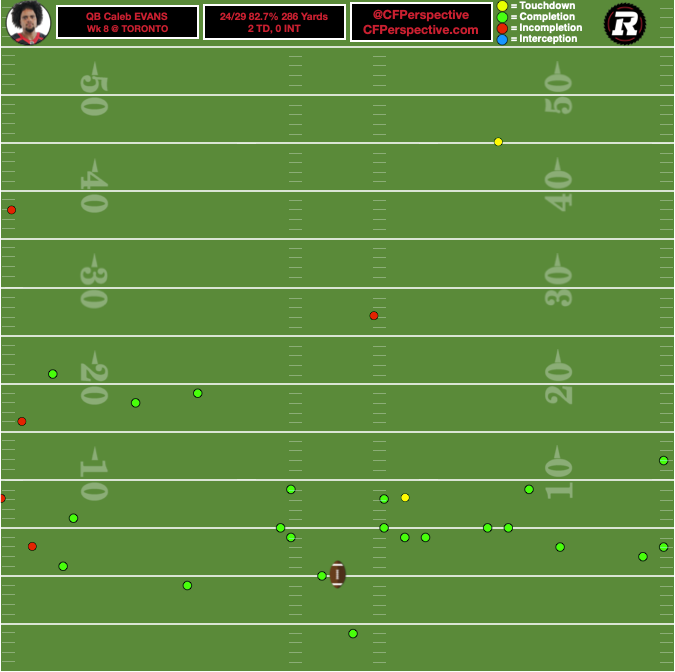 The feel good story of the week around the CFL — unless you’re a Double Blue fan — was the Ottawa REDBLACKS finally eliminating the ‘0’ from their win column. A huge part of that was Caleb Evans‘ visibly apparent progression as a passer.

Yes, there was the odd strange choice to lob a ball down the middle of the field into traffic, but the difference in Evans’ improved processing and accuracy from last year when he fell to the Argos on a Wednesday night at BMO Field was very clear and gives hope to Ottawa before Jeremiah Masoli can return from injury.