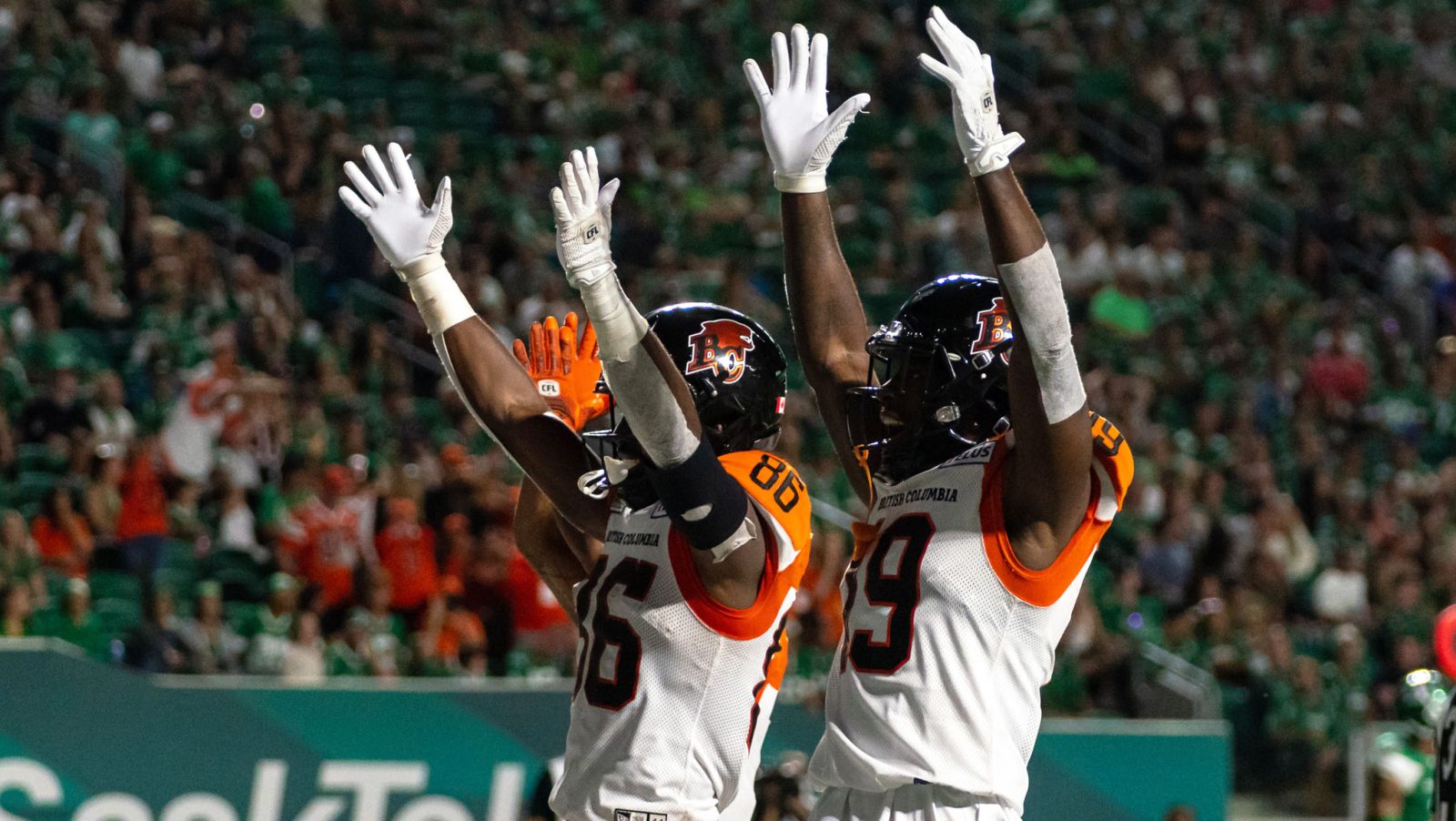 TORONTO — We take our first steps into Week 9 of the CFL season and we have clarity on the one thing that hasn’t changed at all yet. This is still the Winnipeg Blue Bombers’ world and we’re all just living in it.

For now, at least. The Bombers put together (yet) another impressive win in Week 8, going into McMahon Stadium and wiping out a fourth quarter deficit to the Stamps, prevailing 35-28 to improve to 8-0

That widens the Bombers’ lead in the West (16 points) over the BC Lions (10 points) and the Stamps (eight points), giving them some breathing room for the day that they finally take a regular season loss and bring the bottoms of their feet at least a little closer to the ground.

About the Lions and Stamps: they’ve both been batted away by the Bombers this season, but they’re as close to their heels as anyone in the league is right now. These three teams make up the cream of the CFL cop at the moment and that’s reflected in this week’s Power Rankings.

Something interesting is starting to happen in those remaining spots, though, all the way from 4-9. The Hamilton Tiger-Cats and the Ottawa REDBLACKS picked up wins over their Eastern rivals in Week 9 and all of a sudden, that slow-starting division feels up for grabs. The Argos and Ticats are about to see each other four times in five weeks and the Als will see the Ticats two more times in the next six weeks.

Out West, the Edmonton Elks get back into action this week and are sizing up the 4-4 Saskatchewan Roughriders in the standings. It may be static at the top of these rankings on a week-to-week basis, but things could get turbulent in the remaining two-thirds of this list in the coming weeks.

Let’s take a moment here to appreciate where the Bombers are and some of the challenges around this group. There have been injuries to key starters like Greg Ellingson, Nic Demski (who just came back this past week) and Jackson Jeffcoat. There have been short weeks, then-undefeated BC Lions and Calgary Stampeders squads and a re-match with that Calgary team in Week 8. Oh, and as the legendary Bob Irving pointed out after win No. 8, the Bombers haven’t had a bye week yet; none of it has mattered. The Bombers have found a way to get out to an historic start, now just two wins away from the 1960 edition of the Bombers and Edmonton’s 1955 team. This week’s challenge: A short turnaround to go into a home-and-home series against a new opponent in the Montreal Alouettes.

The Lions picked up a gutsy win on the road in a very difficult environment at Mosaic Stadium. The Lions’ second-half blanking of the Riders was a team effort, as Nathan Rourke and Co. put up 18 second-half points, while the defence closed in on Cody Fajardo and the Riders, keeping them off the scoreboard en route to a four-sack night that came with an interception. The win finally puts some separation between what had been four West teams off to strong starts. Pushing the Riders down to 4-4, the cream of the West crop now stands Winnipeg, BC and Calgary.

The Stamps could see the finish line on Saturday night. Holding a 28-25 lead at home with just inside of five minutes to play, the Stamps had a shot at handing the Bombers their first loss of the season. Instead, Zach Collaros coolly (it’s always done coolly) found Dalton Schoen for his second touchdown of the night and put the game out of reach. Just about every team in the league can say it at this point, but the Bombers have been the thorn in the Stampeders’ sides this season. They’ll focus on this week’s game in Ottawa, but their third shot at the Bombers, which comes in Week 12, is surely on their minds as they process another close loss to the defending Grey Cup champs.

The Riders’ move up here is only a product of them having more wins than their Eastern counterparts. The Riders go into their bye week burdened by injuries, with QB Cody Fajardo desperately in need of a chance to rest his ailing knee. He and his teammates can spend this week figuring out what went wrong in how their once dominant 4-1 record now sits at an even .500 with the midpoint of the season quickly approaching. Key upon return for the Riders will be protecting Fajardo. The team’s 29 allowed sacks is a league-worst.

Could this be it? For the entirety of this year, we’ve waited for them to get over the hump and finally start getting back to their winning ways of the past two seasons. CFL.ca’s Marshall Ferguson was eerily on point in this article last week, where he said the Ticats’ defence would have to lead the way if the team was to start stacking up wins. Sure enough, that’s what we saw on Thursday night against the Alouettes, with a swarming defence that almost had Trevor Harris on a number of plays in the fourth quarter, before they got the better of backup Dominique Davis on Montreal’s final offensive play. The Ticats know that the good teams do it consistently. They’ll have to bring that same effort against the Argos this week.

Say hello to a sniff of parity in the East, which will make spots 4-9 exceedingly difficult to peg in these rankings. The Argos shouldn’t be raked over the coals for being the first victim of the REDBLACKS this season; everyone knew they were due and better than their disappointing record. The Argos weren’t able to keep the momentum they’d built up with their pair of wins over Saskatchewan, getting blanked in the second half by the REDBLACKS, while their productive run game from weeks past disappeared at home on Sunday. On-field composure has been an ongoing issue for this team and that hurt them again on Sunday. They’ll need to keep it together through this coming stretch of seeing the Ticats four times in five weeks. This rare match-up leaves plenty of room for these teams to jostle in the standings.

The Elks emerged from their bye week with some roster tweaks and a sign that they’re close to getting some players back in the lineup. Despite all of the hardship this team has been through over the last seven games, they’re facing an opportunity as they head into BC. With the Riders resting this week and having slipped down to 4-4, the Elks don’t feel as out of the picture in the West Division as they did earlier in the season. If Tre Ford is healthy and ready to go against the Lions — feel free to rev your dueling-starting-Canadian-QB-engines — Chris Jones will have a choice to make early this week.

Thursday’s loss to the Tiger-Cats will sting for an Als’ team that let a golden opportunity to create some separation in the East slip away. Now sitting third behind Hamilton and Toronto in the standings, the Als have the unenviable task of facing the Bombers in a home-and-home series before seeing the Ticats once again. On the penalty front, the Als took seven for 89 yards last week. That’s slightly under their season average of 8.7 penalties for 95 yards per game.

The REDBLACKS finally turned the corner on Sunday night in Toronto with a strong QB performance from Caleb Evans (24-29, 286 yards and two touchdowns) and a defensive effort that shut the Argos down in the second half. The REDBLACKS’ ranking at this point is only reflective of their record. That first win was a big one, but they remain behind Toronto, Hamilton and Montreal. The good news there is that it’s completely feasible to think that coach Paul LaPolice’s team could get hot and gain some ground on their Eastern rivals. If that happens in the coming weeks, the climb out of the Power Rankings cellar can begin.