Start vs Sit: QB options to feel fine in Week 9 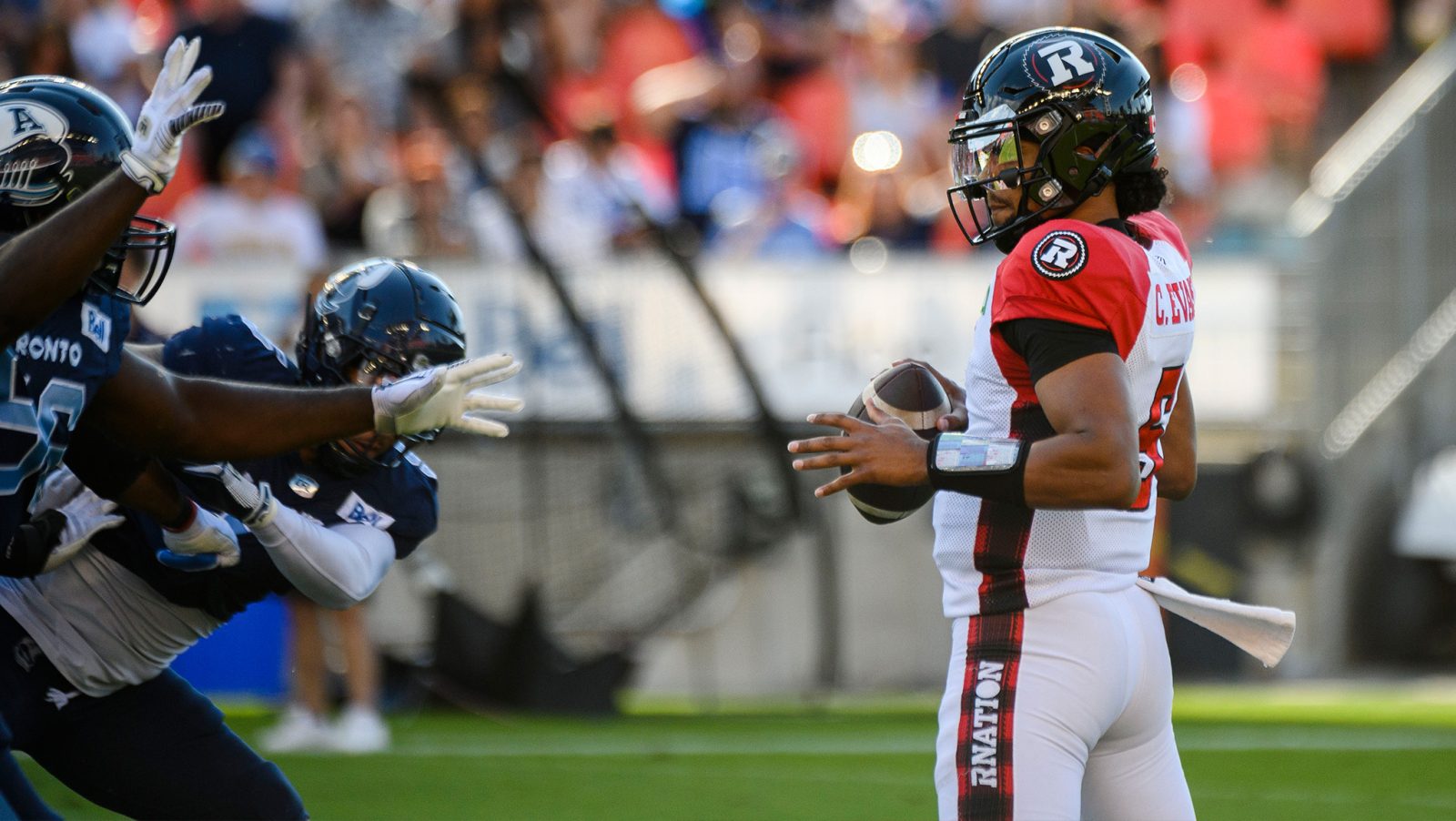 Start vs Sit: QB options to feel fine in Week 9

Week 9 of Start vs Sit is dedicated to the pivots. The CFL fantasy season has seen the position take a step forward into the future with a number of youngsters making their ascent toward elite status, with a veteran or two taking their respective games to another level.

This week will also be kind to running backs, especially one in particular who may have been fallen into the sit category a time or two this season. 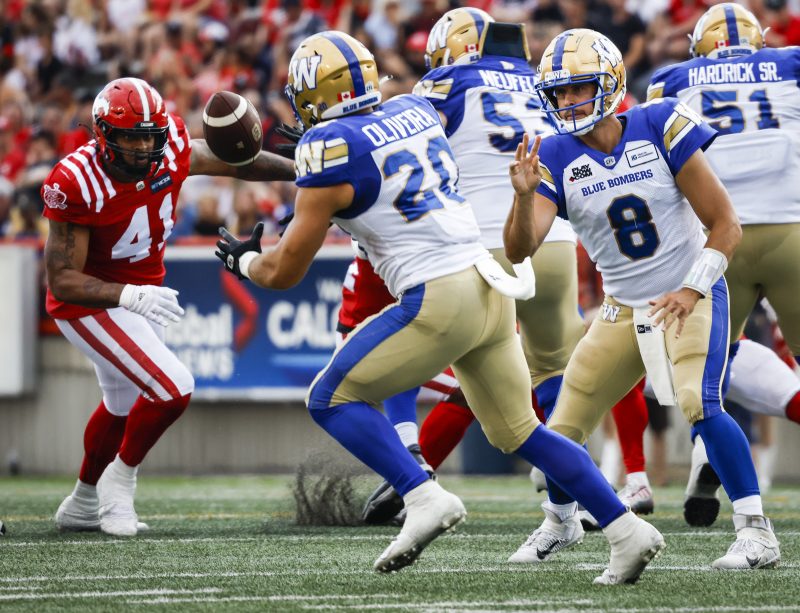 Brady Oliveira recorded his best statistical game of 2022 with 110 yards rushing against the Calgary Stampeders in Week 8 (The Canadian Press).

Patience paid off for the Winnipeg running game on Saturday as Brady Oliveira rushed for a season-high 110 yards on 15 carries. His average of 7.3 yards per carry more than tripled the 3.2 yards per carry he came into the game with. This isn’t suggesting that Oliveira will be a a walking first down machine, yet it does add another element to an undefeated Blue Bombers offence that has thrived mostly on the accurate arm of Zach Collaros ($9,674).

Starting Oliveira on Thursday means he gets a Montreal Alouettes run defence that struggled against Hamilton’s running attack in Week 8. Montreal yielded 102 yards and a pair of majors from the six different Ticats who carried the ball. Oliveira was the only running back who carried the ball for Winnipeg in Week 8, and if he can add a major to his totals, fantasy users will have a bargain to anchor their backfield.

Montreal’s recent emphasis on pushing the ball downfield wasn’t on display in Week 8, with Trevor Harris averaging just seven yards per attempt along with throwing for either one or zero majors for the fourth time in six games.

Only twice has Harris bettered 10 yards per attempt, and it’s that lack of downfield consistency that has hampered the fantasy production of Montreal’s receivers, namely Jake Wieneke ($5,909), who has just 15 receptions and no touchdowns this season after leading the league in receiving touchdowns in 2021.

Winnipeg has allowed 13 completions of better than 30 yards but have not one in the past two games. If the Bombers contain Eugene Lewis ($9,550), that streak has a good chance to be extended.

The REDBLACKS not only won their first game, but may have stumbled into a future quarterback quandary with Evans completing a career-best 82% of his passes (24 for 29) to go along with a season-high 9.9 yards per attempt. Evans crossed 20 fantasy points for a third straight game (22.5) as he and receiver Jaelon Acklin ($7,907) have become the league’s hottest pass-catch duo.

Evans and Acklin face a Stampeders pass defence that was tagged for four touchdowns in last week’s loss to Winnipeg after coming into the game allowing just seven majors. There’s also the threat of Evans running the ball (145 yards the last three games) that has helped his sudden rise among the top fantasy quarterbacks in the league while also making the REDBLACKS an entertaining watch each week.

In three of his past four games, the former West Division All-Star has strangely become a non-factor. Adams caught just one pass for 12 yards in Sunday’s win over the Argos, and if you take away his stellar Week 7 outing against Montreal (nine catches, 118 yards, one touchdown) that is the only reception he’s pulled in, having been shut out of the stats sheet in Weeks 5 and 6.

How one of the league’s most consistent pass catches over the past few seasons has become missing in the REDBLACKS offence is puzzling. Acklin is obviously the top target while Nate Behar ($5,257) is a quiet source of production, yet one would think there’s still enough targets available for Adams. This trend can’t continue, and while there is reason for confidence that Adams will have a stretch of solid performances coming his way, fantasy users obviously have to see it to believe it, so keep Adams out of your lineup this week.

If it ain’t broke…Dunbar was suggested here last week and didn’t disappoint, finishing with 21.2 fantasy points in Hamilton’s win over Montreal. Week 8’s performance was also the third time in four games Dunbar recorded a major, as he is now tied for second in the league with five receiving touchdowns.

What is making Dunbar a weekly staple here is that fantasy users know what they’re getting from him. He’s put up at least 11.3 fantasy points in all but one game this season due in part to his explosive skills. Last week’s 40-yard touchdown was his fifth reception of at least 30 yards and was the third straight week Dunbar rewarded his fantasy users with a big play.

Averaging 18.7 yards per catch this season, Dunbar shapes up to be a good matchup against a Toronto pass defence ranked near the bottom of the league in opponents’ pass efficiency, and as he’s displayed throughout 2022, he doesn’t need too many opportunities to be efficient.

Toronto has allowed just two rushing majors this season, which pairs well with the fact Hamilton has scored just two rushing majors this season, one of which came from recently-activated pivot Jamie Newman ($5,000) last week. If the Ticats are to have success on the ground Saturday evening, it will likely continue to be a group effort rather than one player stepping up.

Lucky Whitehead ($8,802) or Keon Hatcher ($5,576) are also solid choices here, but Rhymes is the play as he faces an Elks defence that has allowed 12 passing touchdowns and is last in opponent pass efficiency. Rhymes has been something of a boom or bust play this season, having put up a pair of 30-plus fantasy point outings while also racking up three games of fewer than 10 points, including a 6 fantasy point effort in the Week 1 win over Edmonton.

Rhymes also has a streak of five straight games of at least one catch of better than 20 yards and will get an excellent chance to extend it against the Elks, who are eighth in opponents’ average yards per pass. BC’s wealth of firepower racked up 59 points and nearly 600 yards of offence on Edmonton in Week 1, and with Rhymes ranked among the best deep threats in the CFL, there’s every reason to feel he’ll put up big numbers.

Like Hamilton, Edmonton’s running success has been courtesy of its pivots, with Taylor Cornelius ($7,580) producing 79 yards, tops among the players in Edmonton’s Week 7 roster. The Elks will have new faces on its Week 9 depth chart, but regardless of who gets the starting nod, they’ll face a Lions defence that has been solid against the run this season.