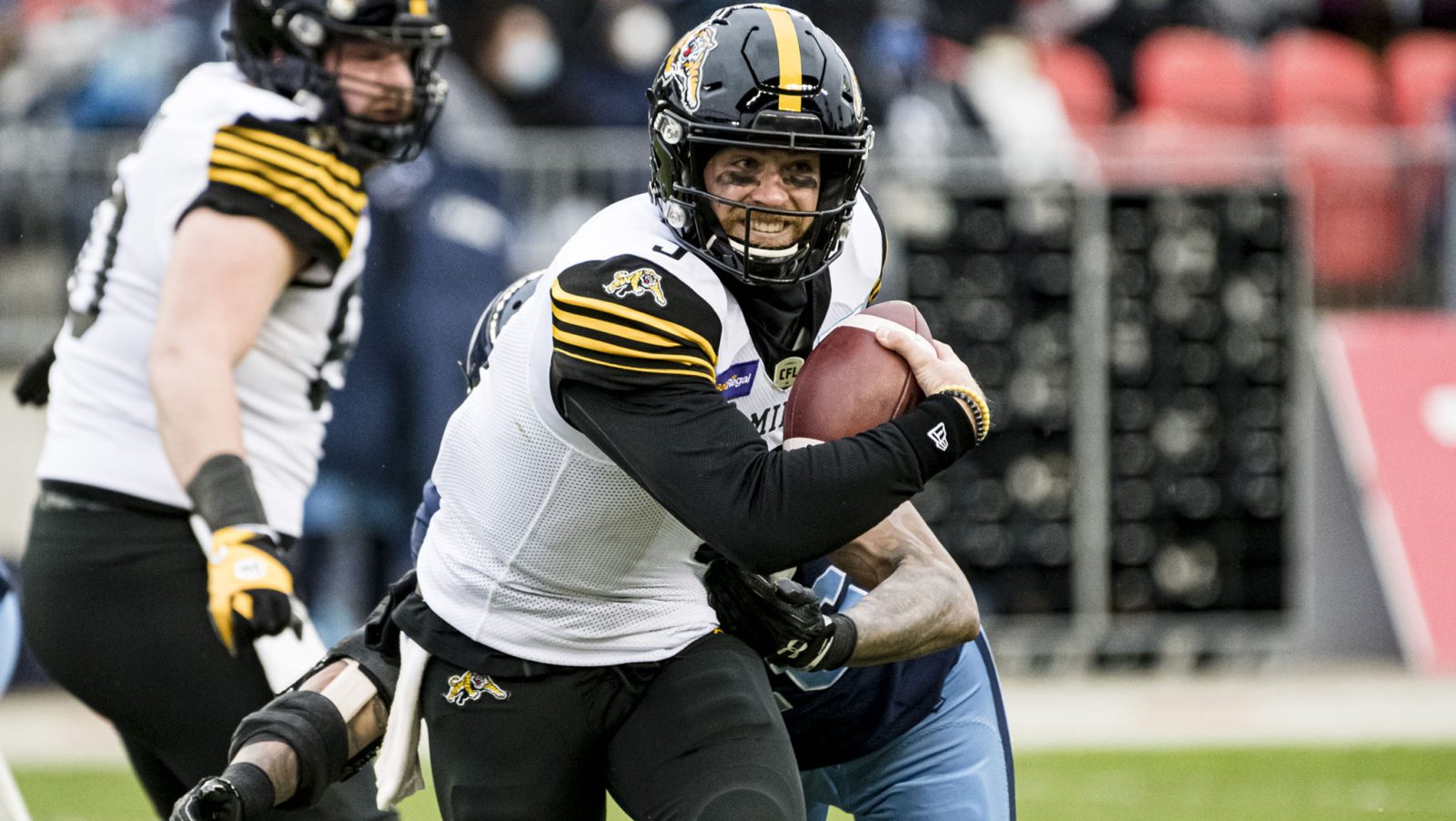 The CFL is serving up an extra-large heaping of “sports hate” for the following five weeks and I’m not talking about the next Calgary-Winnipeg game (Thursday, Aug. 25, 8:30 p.m. ET; set your PVRs now!).

The Toronto Argonauts will face the Hamilton Tiger-Cats in four of the next five weeks and I am here for all of it. Will it be the cleanest football played we have ever witnessed with 60 minutes of smart execution? Of course not. There will be plenty of mistakes, turnovers, penalties and everything from calls for coach firings to quarterback benchings.

I have no idea who puts the schedule together or the mathematical gymnastics required to fit together the Jenga puzzle that is a CFL season, but the QEW Battle is about to get angrier than Ontario motorists at 4:00 p.m. near Oakville when construction is wreaking havoc. Apologies for the super local reference but if familiarity breeds contempt, then 16 quarters of football between the same two teams over the course of a month should lead to some wild moments on the field and plenty of bulletin board material off of it.

We’ll get to the actual on-field implications of these four upcoming contests in a moment, but the reason all football fans should be excited — yes I’m looking at you western Canada — is these games have produced so much animosity (mostly in a good way) and passion over the years.

I understand the reality is that players on my favourite team are often friends with players from an organization I view as a “bitter rival.” Gone are the days when players genuinely did not like their opponent. In 2022, they go out for dinner, train together and often vacation together. The obsessive sports fan inside of me wants to believe that Steven Dunbar Jr. has a picture of Wynton McManis on his mirror and crushes it before gameday the way Rocky did to Drago in Rocky IV. The adult in me has come to peace with the fact that this is not how the world works.

However, some rivalries still bring out that rare brand of player-on-player sports hate. I found this quote from former Tiger-Cats guard Peter Dyakowski talking about the Argonauts:

“I hate them tremendously. Start at the top, the city of Toronto, their players, their fans. When we beat them, everybody in Hamilton feels a lot happier the next day. All the neighbours on my street are always fired up.”

Remember, this sentiment did not come from some crazed football player who lives their life on the edge. This was from the same person who won Canada’s Smartest Person on the CBC back in 2012!

Then there is the relationship between the fans and the players. This has to be a relationship that has its obvious firm boundaries and I have so many memories that fall within that.

I still take joy  in remembering the heat Mike O’Shea took when he returned to Hamilton for the first time as a member of the Argonauts. In 2000 there was a “gift” waiting for him. An old toilet seat with his name on it.

In a 2017 article from The Athletic former Argo safety Matt Black recalls during the 2016 Labour Day Classic that fans had, “Full posters with stuff — they find out peoples’ wives names, who guys’ girlfriends are, their kids’ names. These people invest time in, ‘yo, what am I going to say? How am I going to say it? How am I going to get under this guy’s skin?’”

Again, as long as it is not crossing any lines or getting too personal, I love that unique “relationship” between fans and players. When it comes to signs or heckles, make it fun, make it creative and I will fully endorse it.

I hate to admit this, but I do enjoy when I’m at either stadium and I hear young children bellow Tiger-Cats or Argonauts “suck!” Maybe this is why I am still a professional uncle, but I can’t help but giggle seeing such youthful exuberance. 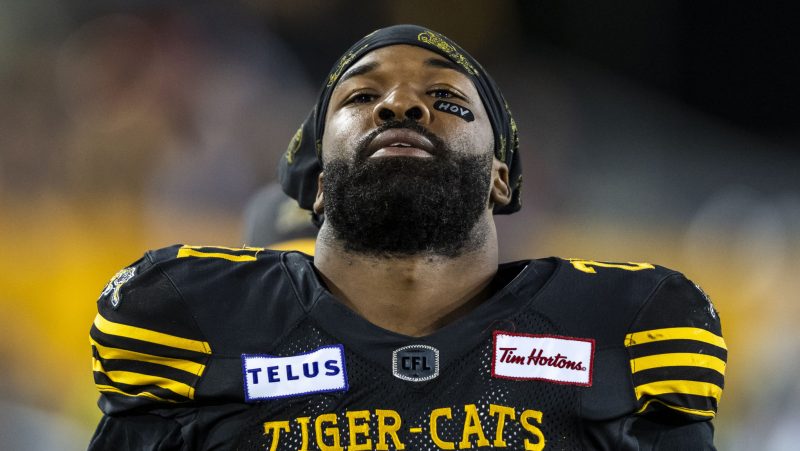 The Ticats are set to get their star linebacker and a key antagonist back at the perfect time, as they gear up to face the Argos four times in the next five weeks (Kevin Sousa/CFL.ca)

Last thought here: it is remarkable timing that Simoni Lawrence has been taken off the six-game injured list with this Double Blue stretch upcoming. As a huge Simoni fan I am looking forward to how he plays on the field and almost as important what he says on the field of battle.

As for what goes down between the lines, we are looking at two franchises wanting to turn around disappointing seasons. Toronto went 9-5 and won the East last year while Hamilton made it to the Grey Cup and were leading the Winnipeg Blue Bombers with under three minutes to go. This year neither squad is above .500 and both have been outscored on the season.

The biggest question I have is can either team fix their ailing offences? Yes, I have images of Jaelon Acklin racing through the Argonauts secondary last year burned in my brain but both teams need more work on the offensive side of things. The Argonauts can move the ball. They’re fourth in the league in total yardage yet last in touchdowns scored. I saw this statistic from Marshall Ferguson who pointed out that the Argonauts did not take a single offensive snap inside the REDBLACKS 29-yard line in their loss over the weekend. How is that possible?

Meanwhile in Hamilton, the Tiger-Cats are last in rushing, time of possession and only the Saskatchewan Roughriders have a harder time converting on second down. No offence to Matt Shiltz but when your backup quarterback is your leading rusher that is not a good sign. What’s worse is Dane Evans is second!

Of course, the bigger issue for both organizations is turnovers. If you wonder how these two teams with the talent they have can be a combined 5-8 look no further than the fact that Toronto is a -10 in turnover ratio and the only team worse is Hamilton at -13.

We can discuss all the reasons why the West is superior to the East in 2022 and near the top of the list is that one half of Canada treats the football with a far higher level of respect than the other. There are five teams with a plus turnover ratio and four of them are in the West, with the other being super weird Ottawa REDBLACKS.

One of the themes this year has been all the momentum killing, game changing turnovers committed by Evans and the offence around him and on the other side, Toronto finished the day minus-2 on Sunday helping Ottawa register its first win of the season.

What I wonder about is how many of the mistakes are about execution that can be fixed in the film room and in practice and how many are about talent level? I bet we’ll have a clearer idea about that question and really about who these teams are by late afternoon on Labour Day.

I’ll be honest: I don’t have a great handle on the identity of who these teams are and what their ceilings can be but I know we will have a much clearer picture after Toronto and Hamilton muddy up the field for the month of August and the start of September.

The battle for the Harold Ballard Trophy begins!