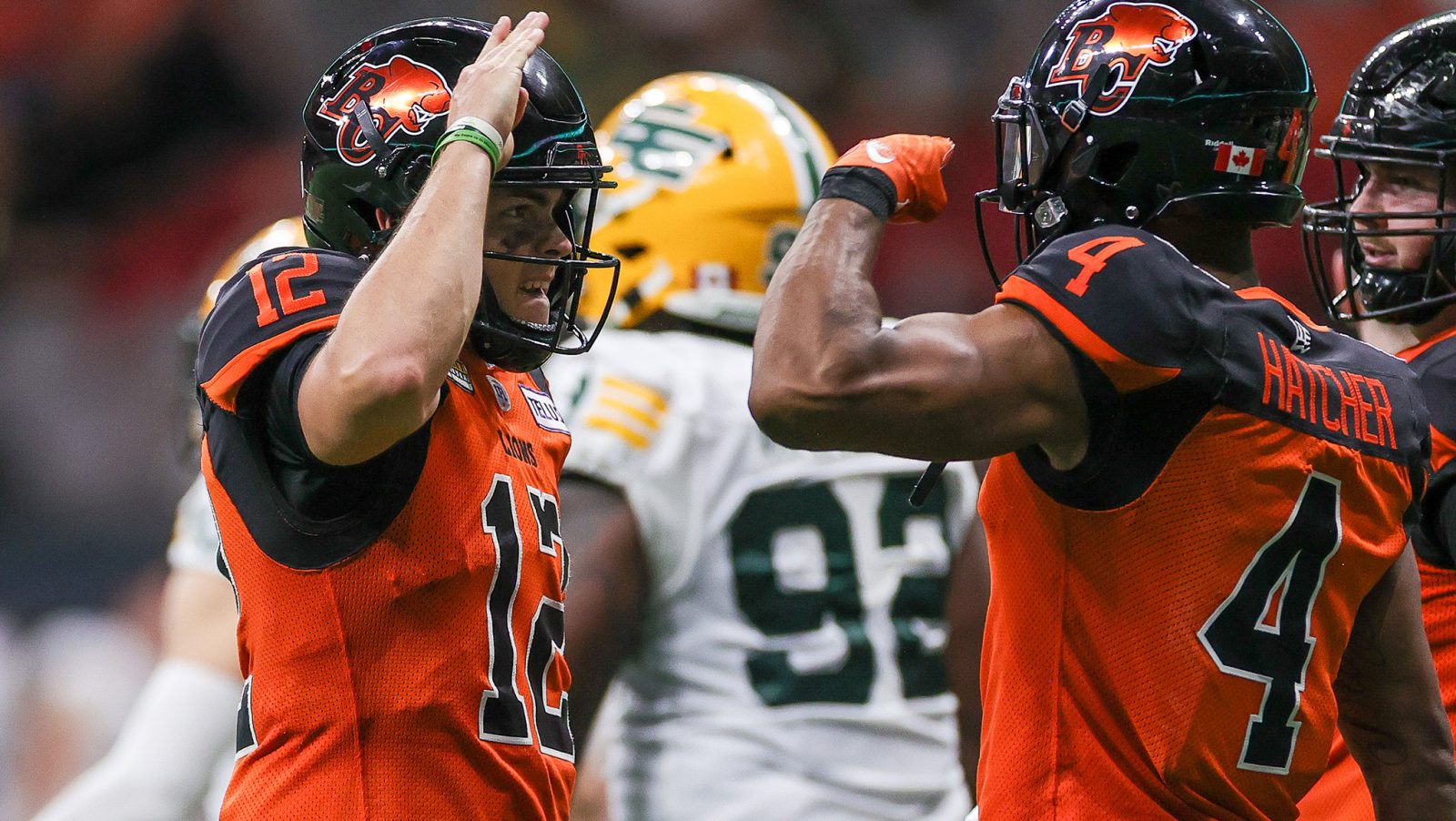 VANCOUVER — The BC Lions made a statement on Saturday night as they came away with a 46-14 win over the Edmonton Elks to close out Week 9 of league action.

The Lions’ win was highlighted by an outburst of scoring, led once again by Canadian sensation, Nathan Rourke. The BC quarterback threw completed 91.5 per cent of his passing attempts, missing on just three of his 37 attempts. Rourke also threw for 477 yards and five touchdowns in the game, giving him a new career-high in both categories.

Despite the eye-popping stat-lines from many of the Lions in the win over Edmonton, Rourke admits that it took his team a few drives to find their rhythm early in the game, but once they did it was they key to their sucess.

RELATED
» Box Score: Elks at Lions by the numbers
» Game Recap: Lions roar in win over Elks
» Through the Lens: Edmonton at BC
» Watch: Ryhmes scores three TDs in first half

” We felt like we got in a rhythm,” said Rourke in a TSN post-game interview. “It took us a little bit, it took a couple drives to get it going, but once we did it was great to get into rhythm out there.”

BC had four receivers each with over 80 receiving yards in the game. Dominique Rhymes, Lucky Whitehead, Bryan Burnham and Keon Hatcher were on the receiving end of  a combined 409 of their quarterbacks 477 passing yards, with Rhymes reeling in three touchdown passes.

The Lions star quarterback was quick to give credit to his time in the win, stating that spreading the ball downfield is merely part of the BC game plan.

“That’s the way we like to do it, we like to spread the ball around,” said Rourke. “Rhymes had a great game, really made some plays for us, but so did everybody else right, it’s hard to leave anyone else out, and that’s what’s great about this team.”

Burnham made his return to the lineup for BC in their win over Edmonton after being sidelined in Week 3 with an injury. In speaking of his teammate, Rourke said it was huge to have Burnham back in the locker room for all that he does both on and off the field.

“He’s big for our locker room, he’s big for that receiver room,” said Rourke of Burnham. “He provides that experience and leadership, and obviously he’s a playmaker on the field. So I’m really excited to have him back and we’ll be firing on all cylinders.”

The Lions will be on the road in Week 10 as they travel east to take on Bo Levi Mitchell and the Calgary Stampeders.