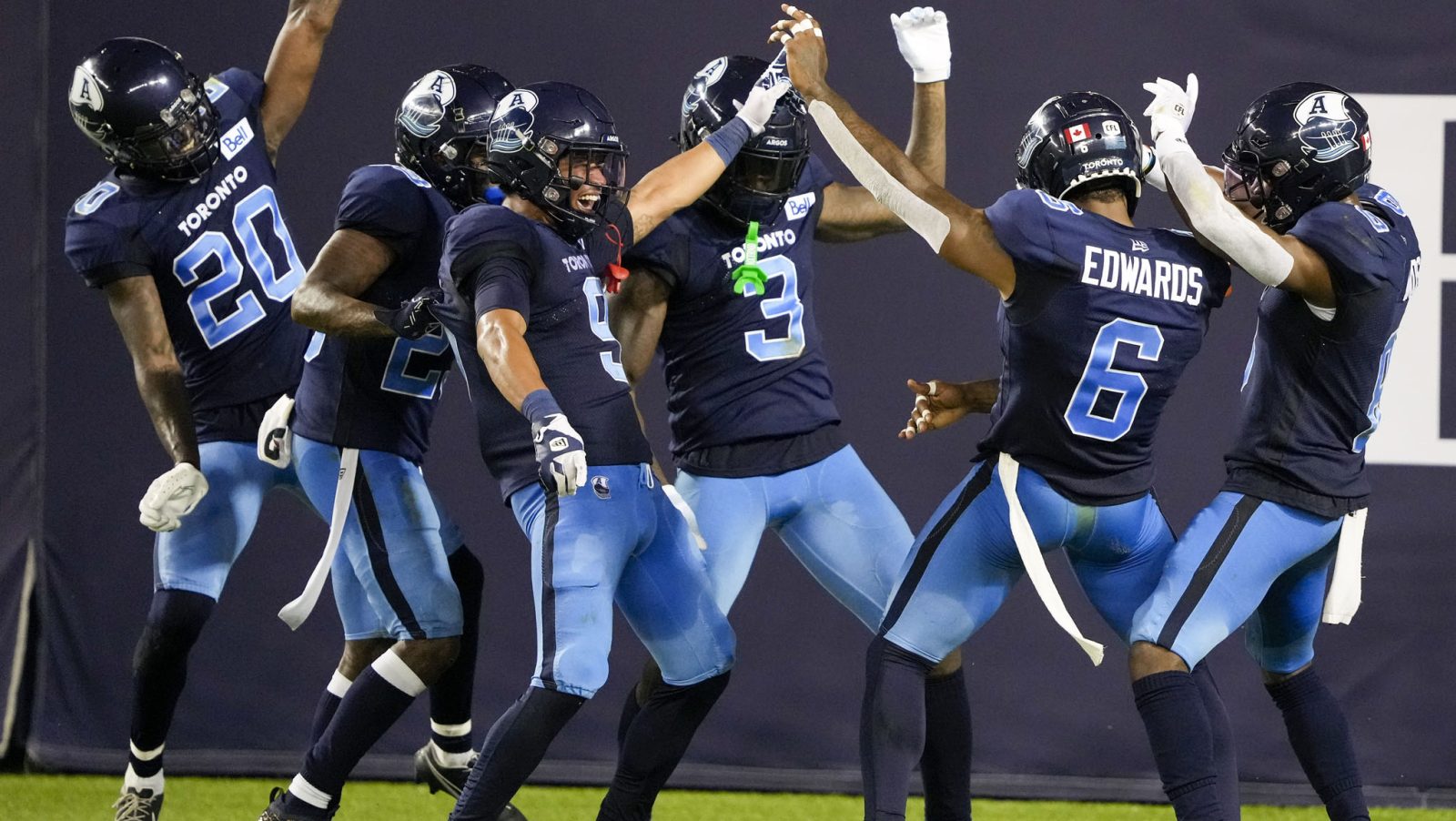 One of the league’s most interesting stretches kicked off Saturday night and the Toronto Argonauts won the opening round. With a 34-20 comeback win over the Hamilton Tiger-Cats, the Argos took game one of their season series with their top rival. It just so happens that season series consists wholly of four games played in a five-week span. Buckle up.

First off, that was an outstanding game. Despite a 14-point final margin, I didn’t know who was coming out on top until Chris Edwards ran back a Dane Evans interception with less than two minutes to go. It was a game worthy of one of the CFL’s top rivalries and the perfect way to kick off this four-game miniseries.

I give Toronto a ton of credit. McLeod Bethel-Thompson and the Argonauts offence couldn’t seem to get anything going for a vast majority of the first half, but they stuck with it. And Bethel-Thompson stuck with it. He made a couple of huge plays in the second half to get Toronto back in the game and did a great job limiting mistakes.

RELATED
» Box Score: Ticats at Argos by the numbers
» Through the Lens: Hamilton at Toronto
» Recap: Argos earn comeback win over rival Tiger-Cats

I also liked how the Argos dealt with Hamilton’s pressure as the night went along. Bethel-Thompson and Toronto’s offensive line were constantly under siege in the first two quarters, but they did a much better job dealing with it after halftime. We know the type of heat the Ticats can bring and managing that is going to be key during this stretch.

For Hamilton, this one stings. It was another late heartbreaker, which is a trend the Tiger-Cats would love to stop in the very near future. On top of that, the injury sustained by receiver Bralon Addison looms large over this one. I’m such a huge fan of Addison when he’s healthy because he’s so exciting to watch, so seeing him carted off was tough to watch.

It wasn’t all bad for the Ticats, though, and I think they have things to build on despite the sour taste of this loss. Hamilton was able to put together solid sustained drives all night long but had trouble finishing them with six points. Red zone efficiency is something I’ll be watching when these two meet again on Friday.

Don Jackson was another big standout, and not just because of his elite touchdown celebration. Jackson has a touchdown in consecutive weeks and continues to make a case for himself to be a bigger part of Hamilton’s offence. While the Tiger-Cats may not be an offence suited for a “feature back,” Jackson has been regularly productive when given an expanded role. I’m curious if Saturday might pave the way for more touches.

This four-game set between Toronto and Hamilton is going to go a long way in determining the East Division’s playoff picture. If the Ticats are able to take the next three, suddenly things are going to look a lot more interesting at the top of the division. If Toronto gets the split or better, they’ll have made big strides in putting their top rival behind them for good.

I can’t wait for the next three!

Speaking of buckling up, I don’t think there’s any doubt what game stands above the rest on the Week 10 schedule: the BC Lions and Calgary Stampeders. As we get set for the first of three meetings between these two (the next two are in September), it sure does look like Calgary and BC are poised to go head-to-head down the stretch for second in the West Division.

That’s not meant to disrespect Saskatchewan, either. With three straight losses, the Riders are in a bit of a rut right now and their biggest priority is to right the ship starting with Saturday’s game in Edmonton. Sask has plenty of time to get back on track and they may yet factor into the race for second. If not, the crossover is wide open. And, well, I don’t think we need to mention 9-0 Winnipeg, as they just keep doing their thing.

So back to the Stamps and Lions. Even though Friday’s win wasn’t picture perfect, there was a lot to like as Calgary prevailed 17-3 in Ottawa. On a short week with travel out east, the Stampeders put on a defensive clinic. Neither Nick Arbuckle nor Caleb Evans could get anything going at quarterback, while aside from a pair of double-digit gains, the REDBLACKS were rendered virtually irrelevant on the ground.

Calgary also has to feel good about the way they ran the ball, even with star back Ka’Deem Carey out with an injury. In his absence, Dedrick Mills hit triple digits on 16 carries and helped the Stamps employ their brand of ball control offence.

Then there’s Nathan Rourke who just loves to keep setting the bar higher. How about 477 yards and five touchdown passes in BC’s 46-14 win over Edmonton on Saturday night? How about 25 more yards and another touchdown on the ground? When Rourke feels it, he feels it…and boy was he feeling it against the Elks.

Knowing the wins each team is coming off, Saturday’s game at McMahon Stadium looks fascinating. As things keep coming along defensively for the Stamps, and coming off their best defensive effort of the season, they’ll be fired up for a huge test against Rourke and the Lions.

As for BC, well, they’re rolling now. Since a humbling loss to Winnipeg, the Lions have won three straight and they’ve got a chance to truly move into the driver’s seat for second in the West and a home playoff date.

I’ll use the two words I said way back at the top…buckle up.