Lions claw their way to win over Stampeders 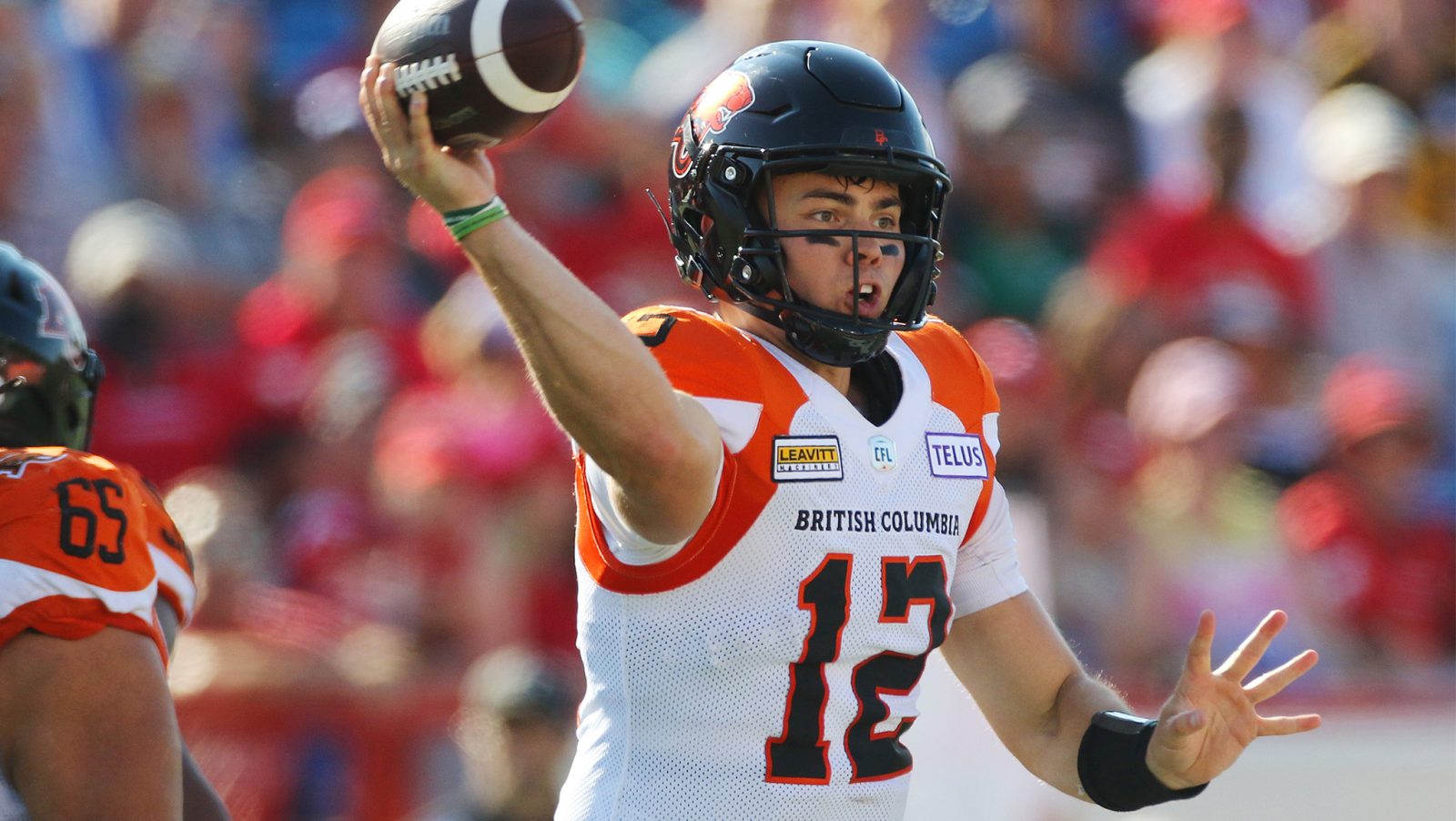 Lions claw their way to win over Stampeders

CALGARY — Despite a historic evening from Calgary Stampeders’ quarterback Bo Levi Mitchell, it was the BC Lions who managed a 20-point fourth quarter offensive expulsion, ending with a last second field goal as they completed the comeback win over the division rivals.

The Lions earned a hard fought 41-40 win over the Stampeders at McMahon Stadium to open a Saturday night doubleheader in Week 10 of league action. The win pushes BC to a 7-1 record and they retain their hold over second place in the West Division standings.

With his first completion of the game, Mitchell passed Henry Burris as he became the franchise’s all-time leader in passing yards, the Calgary pivot would complete 18 passes for 206 yards and two touchdowns in the loss to BC.

For the second consecutive week, BC quarterback Nathan Rourke broke his own record and career-high in total passing yards, completing 39 of his 53 attempts for 488 yards and two touchdowns. The Canadian pivot added two goal line scores in the game and overcame a two interception evening to lead his team in the win.

RELATED
» Box Score: Lions, Stampeders by the numbers
» Through the Lens: BC at Calgary
» Watch: Calgary extends lead with pick-six
» Watch: Rourke connects with Rhymes for ninth TD

The Lions offence took the field to open the game, with Rourke hoping to carry over the momentum earned from his outstanding performance in Week 9.

However, the Stamps defence looked ready for the young pivot, forcing an errant throw on second down pass as the defence forced a two and out from the BC offence on the games’ opening drive.

With Calgary’s Payton Logan back to receive the BC punt, Lion’s punter Stefan Flintoff sent a booming kick downfield that Logan was unable to track as he lost the handle and fumbled the return. BC was able to recover the loose ball, giving their offence a fresh set of downs on the Calgary 28-yard line.

Calgary’s defence would limit the damage from the turnover, holding the BC offence out of the end zone. The Lions would still manage points as kicker Sean Whyte made good on a 19-yard attempt to open the scoring and give his team and early three-point lead

Entering the game needing just six yards to become the Stampeders’ all-time passing leader, Mitchell would do so with his first completion of the game with an eight-yard completion to Shawn Bane Jr. Unfortunately, for the Stamps they would remain two yards shy of the first down and they would be forced to try a field goal.

Stampeders kicker Rene Paredes connected on a 28-yard attempt to tie the game 3-3 midway through the first quarter.

As the first quarter continued on, it was a pair of firsts that helped the Stampeders earn their first lead of the game.

With their defence on the field after the field goal from Paredes, Canadian saftey Nick Statz  intercepted a Rourke pass for his first career interception.

Following the turnover, Calgary’s offence would need just two plays to find the end zone, a 23-yard catch and run from Bane would help to set up a 19-yard touchdown pass from Mitchell to rookie receiver Jalen Philpot giving the Stamps a 10-3 lead over the Lions.

The Touchdown from Philpot marks the first career CFL touchdown for the young Canadian pass-catcher.

Nearing the end of the first quarter, the Stamps would once again call upon their veteran kicker in hopes of earning points. Paredes split the uprights on a deep 53-yard field goal attempt, tying his career-long and pushing the Stampeders lead to 10-points.

Opening the second quarter with their offence on the field, the Lions were looking to erase some of the deficit that had begun to accumulate.

Dropping back to pass, Rourke fired a strike intended for a crossing Jevon Cottoy, but Stamps defensive lineman Folarin Orimolade read the play perfectly and stepped in front of the pass for the interception. Orimolade would return the interception 28-yard for a touchdown, helping his team to a 20-3 lead early in the second quarter.

Despite facing the 17-point lead that Calgary had built, the Lions showed no signs of wavering as Rourke led his team on a touchdown drive that needed just five plays. The drive was highlighted by a beautifully arcing 30-yard pass that found it’s way into the hands of Rhymes for a touchdown, giving the BC pass-catcher scores in three consecutive games.

Appearing in his 100th career game, Burnham had two catches on the Lions scoring driving, giving him at least one reception in 99 consecutive games.

Nearing the midway mark of the quarter, the Stampeders were again reliant upon Paredes to find points. The Calgary kicker connected on a 33-yard attempt for this third made field goal of the game, pushing his team’s lead to 13.

Following the Stampeder field goal, Rourke once again remained poised and collected as he engineered a seven-play 70-yard scoring drive to close the gap on Calgary before half time.

Rourke completed four consecutive passes to help put his team on the Calgary one-yard line. The BC pivot called his own number on back-to-back plays, finding the end zone with a second-down plunge for his sixth rushing touchdown of the season.

With just over two-minutes remaining in the first half, Mitchell and the Stamps offence were able to match the quick scoring pace set by the Lions on the previous drive. Needing just five plays to find the end zone, Mitchell completed a 24-yard touchdown pass to Bane pushing the Calgary lead back to 13.

A rouge scored on a long punt from BC would cut the Calgary lead to 12 points to end the first half of action.

The Stampeders would start the new half of play with their offence on the field, while they would be held out of the end zone, Calgary would still strike for the first score in the third quarter.

Paredes continued his showing of consistency as he split the uprights on a 51-yard attempt for his fourth made field goal of the game, giving the Stamps a 33-18 lead.

The BC offence would manage an eight-play scoring drive in response to the Paredes field goal. A 21-yard pass from Rourke found Rhymes in the end zone for what appeared to be their second touchdown connection of the evening. However, offensive pass interference was ruled on the play, forcing the Lions to settle for a 38-yard field goal from Whyte.

With just under a minute to play in the third quarter, Mills was given a handoff, but BC rookie defensive lineman, Nathan Cherry muscled his way into the Calgary backfield to jar the ball loose from Mills. Lions’ linebacker Ben Hladick managed to secure the forced fumble.

The Calgary defence would once again hold the Lions offence following a forced turnover, Rourke was unable to connect with Lucky Whitehead in the end zone. BC was forced to settle for a field goal as Whyte made his 23-yard attempt, cutting the Stamps lead to nine points.

Approaching the midway point of the fourth quarter, the Lions offence was finally successfully in finding the spark they had been looking for all game. Rourke heaved a deep pass downfield, connecting with Burnham for a 53-yard touchdown, cutting the Calgary lead to two-points.

Calgary would not have to wait long to muster a response, Logan fielded the ensuing kick off and returned it for a 99-yard touchdown to help push his team’s lead back to nine, more than making up for the earlier fumble.

With just over three minutes remaining in the game, the BC offence faced a crucial third-down and nine from the Calgary 49-yard line. Rourke looked towards the veteran hands of Burnham who made a highlight-reel 33-yard catch through traffic to help give his team a new set of downs.

Rourke would go on to complete a nine-yard pass to Rhymes to help set the Lions offence up on the one-yard line, before calling his own number on the quarterback sneak, scoring his second rushing touchdown of the evening. Making it a two-point game with two minutes remaining.

The Lions defensive unit would get the stop they desperately needed, as a pass from Mitchell intended for Reggie Begelton fell incomplete on a second down attempt.

Starting on their own six-yard line, Rourke and the Lions offence had one last chance to attempt to complete the comeback.

Following a roughing the passer penalty called on Calgary’s Cameron Judge, Rourke completed four passes, including a 32 yard completion to Whitehead to give his team a chance to win the game.

The completion to Whitehead pushed Rourke’s total passing yardage over 480 yards, setting a new season-high and breaking his previous record for the second consecutive week.

With five seconds remaining in the game, Whyte came up clutch, splitting the uprights on a 25-yard field goal attempt securing a last seocnd win for his team.

Looking ahead to next week the Lions will matchup with another West Division opponent as they travel to take on Cody Fajardo and the Saskatchewan Roughriders. Calgary will make the long road trip east as they prepare for a Week 11 matchup with the Toronto Argonauts at BMO Field.