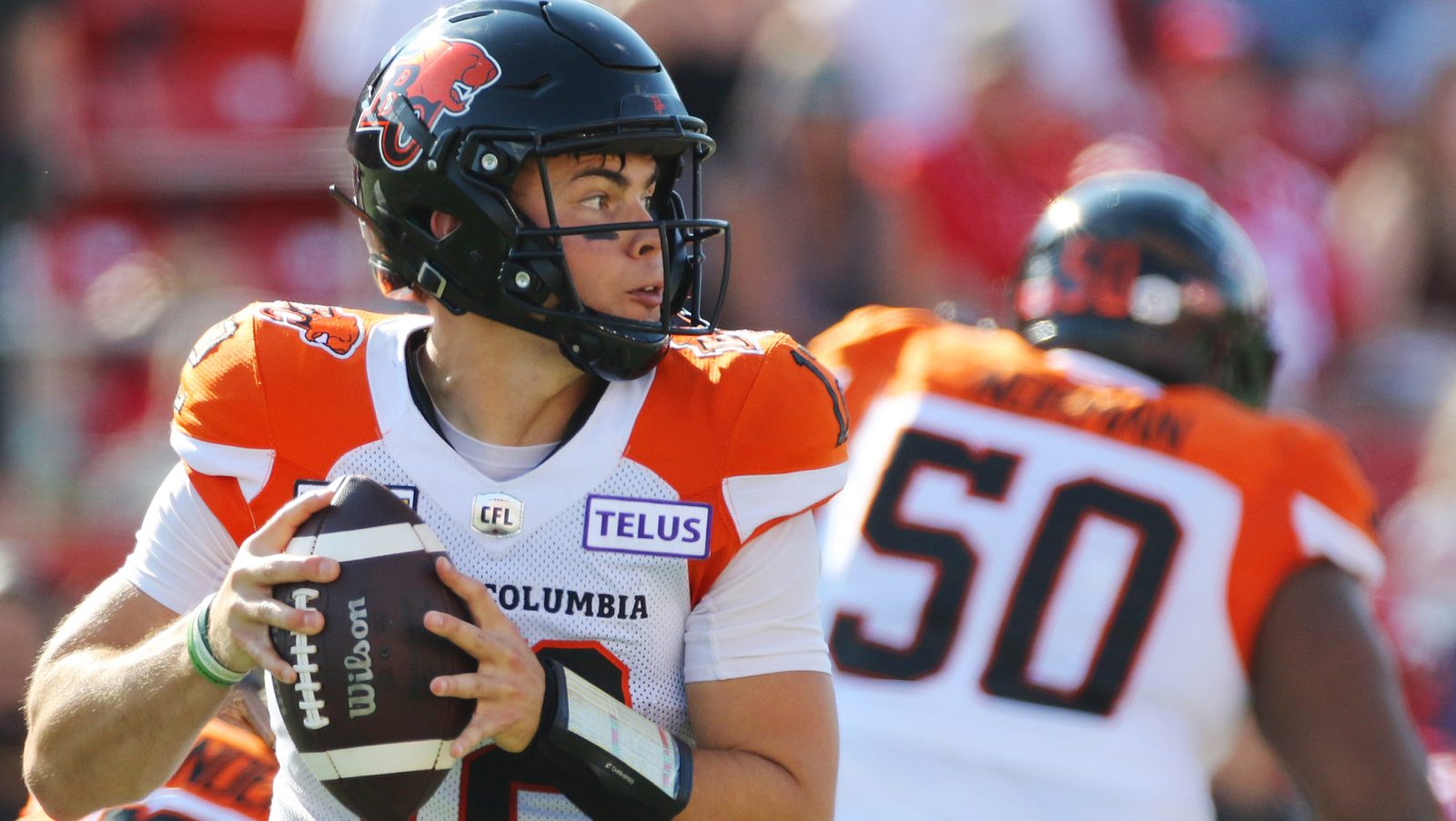 Nathan Rourke has been THE story of the first half of the season. The BC Lions quarterback is rewriting the record book and is the main thrust behind his team’s 7-1 record. But as Rourke’s first year as a professional starter rolls on, he’s facing new challenges along the way. Saturday night at McMahon Stadium was one of those examples…and Rourke passed with flying colours.

By looking solely at Saturday’s boxscore, Rourke looks like he was in superstar form once again. 488 passing yards and two touchdowns to go along with two more rushing touchdowns…yeah that looks pretty good. But the raw numbers don’t tell the whole story of how impressive, and important, Rourke’s night was.

Rourke’s first opportunity to lead his team back from a big deficit against a quality opponent came in Week 5 against Winnipeg. It didn’t materialize that night and the Lions were humbled by a 43-22 final score. Fast forward to Saturday, and BC was back in the same situation against the Stampeders. This time Rourke led his team all the way back.

The Lions trailed Calgary virtually all night, and by double digits for a vast majority. They were down 20-3 in the second quarter, for instance, and the Stamps had forced Rourke into a few crucial mistakes including a Folarin Orimolade interception returned 28 yards for a touchdown. Rourke and the Lions looked out of sorts on the road and faced a significant uphill climb.

But one of the traits a great quarterback is being able to adjust and respond to adversity. Rourke responded like a man on a mission and that response culminated in a 41-40 victory to put the Lions in the driver’s seat for a home playoff date.

After falling behind by multiple possessions, BC kept the game from completely getting away with important points in the second and third quarters. Finally, Rourke and kicker Sean Whyte helped the Lions to points three consecutive times without a Calgary answer and got back within nine and then two points.

But when Peyton Logan returned a kick following a touchdown 99 yards for a 40-31 Calgary lead, this game looked over. Rourke and the Lions were down by nine with less than seven minutes remaining and all that work to get back within small single digits looked to be wasted. Rourke had other ideas.

On BC’s next possession, Rourke went six-for-six, overcame a sack, and finished a 77-yard drive with a quarterback sneak touchdown to get back within two. After forcing a punt, the Lions had 1:22 left on the clock to score once more…and they started on their own six.

So what did Rourke do? He completed four more huge passes and moved the Lions 86 yards in less than 80 seconds to setup Whyte’s game winning field goal. It was the type of fourth quarter we’re used to seeing from names like Ray, Mitchell, Flutie, Calvillo, Reilly, or Garcia. It was next level stuff.

We’re not even halfway through the 2022 season, but many are earmarking Rourke as the Most Outstanding Player frontrunner. The statistics do a pretty good job backing that case up…but if you’re on the fence, go watch Saturday’s fourth quarter.

I couldn’t help but feel bad for Marc Liegghio on Thursday night. Winnipeg’s kicker shanked a game winning field goal attempt before pounding a potential game tying boot in overtime off the upright. As a result, the Bombers lost for the first time this season, dropping a 20-17 decision to the visiting Montreal Alouettes.

But as much as I felt bad for Liegghio, now in his second CFL season, I also give the guy a ton of credit. He owned it, put on a brave face, and spoke to the media following a tough loss that would have seen his team go to 10-0 on the season.

“It doesn’t feel the best to not hit a game winner,” Liegghio said. “You just move onto the next and, you know, that’s what pro football is. It comes with its ups and downs and that’s how the pro’s go further…you wash it and move onto the next one.

“You can’t let it sit with you and then you just keep on getting better from here. It’s a good learning point and…every kick is a learning thing for me and I just take it to the next one and what I can improve on for the week after.”

Liegghio and the Bombers don’t play again until Week 12 when they host Calgary at IG Field.

Despite Liegghio’s misses, it would be unfair not to give Montreal a ton of credit for Thursday’s win. Not only did the Als stay composed, they also made life difficult all night for reigning MOP Zach Collaros. Montreal sacked Collaros three times and had him under pressure time and time again. That’s a huge reason why the Alouettes are the first team to hand Winnipeg a loss in 2022.

Knowing how the fourth quarter has gone this season for the Hamilton Tiger-Cats must have made their 34-27 comeback win on Friday that much sweeter. Trailing 24-17 after 45 minutes, the Ticats put up 17 in the final frame to draw even in game two of their four-game miniseries with Toronto. Hopefully that fourth quarter will help Hamilton put some of their tough finishes this season behind them.

Finally, there was one positive that stood above the rest as Saskatchewan snapped a three-game skid with a 34-23 win in Edmonton on Saturday. The fact that quarterback Cody Fajardo ran the ball eight times for 51 yards and looked rather limber in doing so was really encouraging. We know Fajardo has been playing through a knee injury of late, so seeing him run the ball the way he did is an encouraging sign as the Riders get set to host BC in Week 11.