Start vs Sit: Making the most of Week 11 in Fantasy 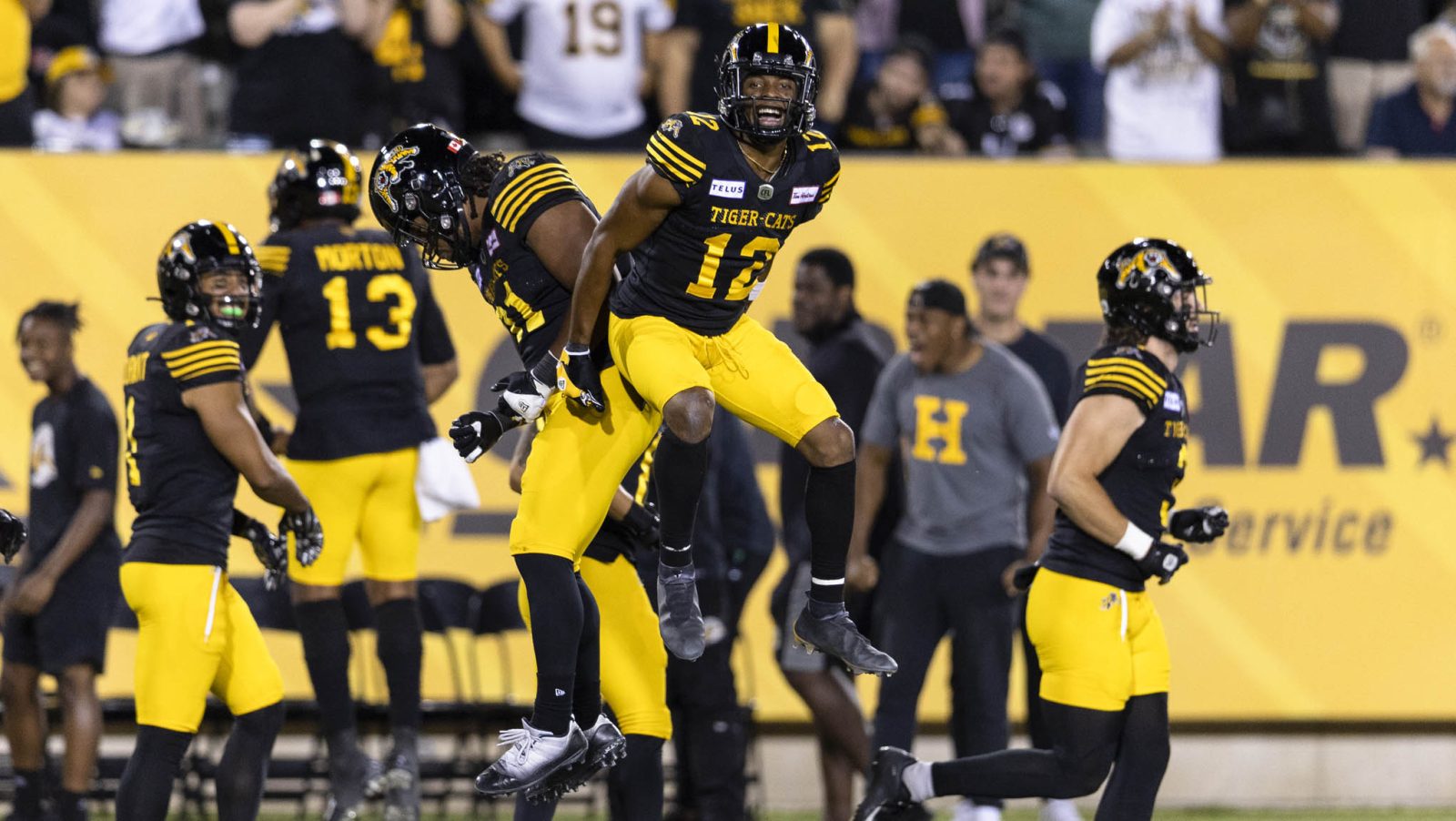 Start vs Sit: Making the most of Week 11 in Fantasy

We are at the midway point of the season and while the issue of award winners is indeed a hot topic, CFL fantasy users brace themselves for a Week 11 that does not have the Blue Bombers, who (finally) get a week off.

Coping without Dalton Schoen in the lineup? Flustered that Brady Oliveira is taking a break? Yeah, we sympathize, yet we go forward with a surprise or two that will fill the void of simply plugging a pair of sure bets. 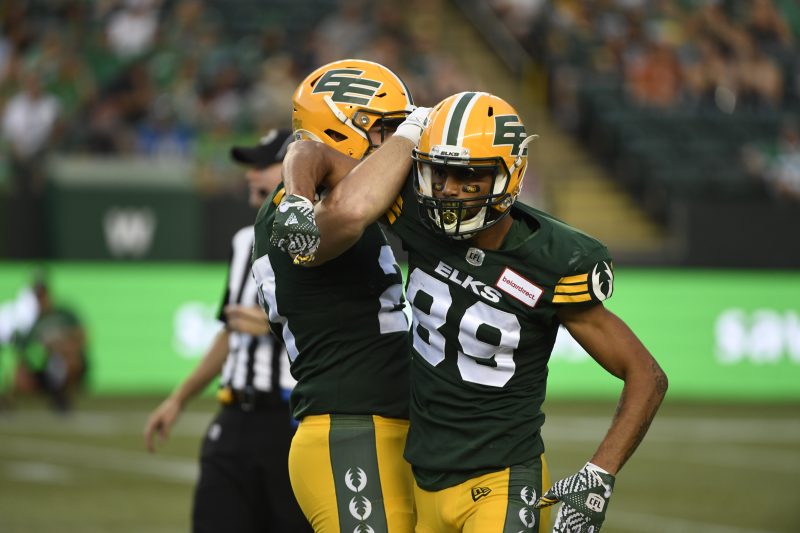 In a challenging season for the Elks, Kenny Lawler has been a consistently productive piece of their offence (GoElks.com).

A game featuring two teams with a combined 3-14-0 mark is an obvious sign few steady fantasy options are available, so let’s go with the one sure play with Lawler, who did record his first 100-yard game since Week 2 with a 6-105-0 line in Saturday’s loss to the Roughriders. After being targeted just four times in Week 9, Lawler went back to normal, as he was targeted nine times by pivot Taylor Cornelius ($8,057).

Lawler has also been a steady fantasy contributor over the past four games, averaging 16.75 fantasy points per contest. He has a pair of games of over 22 fantasy points and faces a REDBLACKS defence that is eighth in both opponents’ average yards per pass and opponents’ pass efficiency. Lawler is also averaging 17.5 yards per catch in his past two games, yet another reason to start him and get your fantasy week off with a huge Friday evening.

The last we saw of Evans, the Ottawa pivot shattered any happy-joy feelings fantasy users had about him when he sputtered for just 66 passing yards and a pick-six during the Week 9 loss to Calgary that eventually led him to be benched in favor of Nick Arbuckle ($6,526). Evans only had six rushing yards, and if Evans isn’t running, his fantasy value takes a huge hit.

Absence makes the heart grow fonder, yet in this case, absence is a reminder to not roll the dice on Evans this week. There is no guarantee Evans will be starting, as his Week 9 play opens the door for the REDBLACKS to see what Arbuckle can do. Regardless as to who starts, Ottawa’s 85.5 pass efficiency is eighth overall, so consider this week a wise decision to pivot away from Ottawa’s passing game.

Acknowledge him. The alpha dog of the BC receiving corps quickly regained his status, producing a combined 50.7 fantasy points in his first two games back from the sis-game injured list. Burnham lit up the Stampeders for 8-165-1 in Saturday’s Game of the Year candidate and has caught majors in each of his last three games. To put Burnham’s return in more perspective, his 50.7 FP in two games is more than Montreal’s Jake Wieneke ($5,850) season total of 49.1.

Saskatchewan gave up 336 yards and two majors to Nathan Rourke ($14,000) in a Week 8 home loss to the Lions that included a pair of completions of better than 30 yards. The scary part is that Burnham didn’t partake in the feasting of the Roughriders secondary. This time around, BC’s big dog will get his share.

Oddly enough, Morrow’s slump came around the same time the Roughriders added Mario Alford ($3,771) to take return duties from Morrow, who was on pace to rack up over 3,000 all-purpose yards. Alford’s addition (two returns for majors) has been a spark for Saskatchewan’s special teams, yet since his arrival, Morrow has rushed for a combined 118 yards on 31 carries (3.8 yards per carry) and has not scored a rushing major since Week 5.

Is this just a slump or are we seeing a trend? Keep in mind BC held him to 47 yards on eight attempts in their first meeting, although he did add four receptions for 39 yards. Morrow is still second in the league in rushing, yet another rough outing could entice the Roughriders to give Frankie Hickson ($4,000) an extensive look. Stay tuned.

We called on White to deliver in this space last week and he didn’t disappoint, catching four passes for 77 yards and a major to help Hamilton hold off Toronto. Why not go with White again, as he was the one receiver that was able to overcome the mayhem at pivot with Matt Shiltz ($6,321) and Jamie Newman ($5,000).

If Dane Evans ($7,962) is back in the lineup it only bolsters White’s value. The Ticats’ ground game is still a grab bag of confusion, so expect White to grab an occasional carry. Evans and White had considerable success earlier in the season as White had four straight games of at least 13.1 fantasy points before his sudden disappearance from the offence. He’s back now, so fantasy users can feel confident plugging White into the lineup despite Montreal’s above-average pass defence.

Getting the ball downfield has been a struggle for Harris the past three games, averaging a paltry 6.6 yards per pass. Consecutive games against the Blue Bombers’ defence netted Harris just 340 yards and a major on a combined 53 attempts, while he’s managed just two touchdowns in the last three outings.

Montreal’s passing game lacks spark without Eugene Lewis ($9,308) involved. Lewis has 82 targets; the next-highest on the roster is Reggie White, Jr. ($4,434) with 49. No other receiver has more than 35 targets and while it can be easy to put the blame on Harris, the reality is that the Alouettes don’t have another legitimate threat beyond Lewis. Don’t expect someone to stake that claim against a Hamilton pass defence ranked second in fewest yards allowed per game. 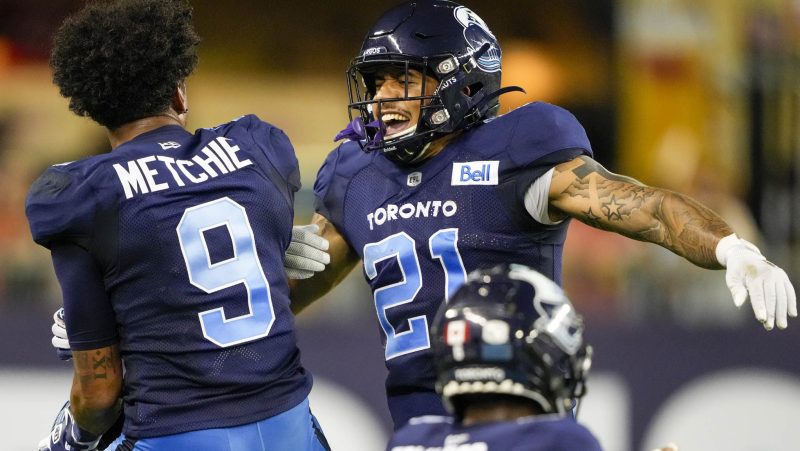 Canadian rookie Daniel Adeboboye could see his usage increase if Andrew Harris‘ injury is a long-term one (Kevin Sousa/CFL.ca)

Andrew Harris’ season is at great risk, as he underwent an MRI on Monday for a possible torn pectoral muscle. A positive result likely means Toronto’s workhorse is done for the 2022 campaign.

A.J. Ouellette ($4,000) generated 83 yards from scrimmage as Harris’ replacement in Saturday’s loss to Hamilton, but if the Argos want to get serious about not only making the postseason but also look at their future, now is the time to give the ball to Adeboboye, who has not recorded a carry since Week 1. If the Argos do put the 15th overall pick of the 2022 CFL draft atop its depth chart on Friday, be willing to give Adeboboye a shot. At such a bargain rate, Adeboboye will be able to allow fantasy users to go big at either pivot or receiver while still getting a chance at solid numbers.

Hidden under the news of Mitchell becoming the Stamps’ all-time leader in passing yards on Saturday was that Mitchell failed to average at least seven yards per attempt for the fourth straight game. Mitchell is averaging 6.25 yards per attempt in that span that has also seen him manage just three passing majors, two of which came in Saturday’s loss against BC.

A struggling Mitchell also means the Stampeders’ receiving corps suffers, and oh, how it has. Reggie Begelton ($8,541) has yet to record a 100-yard game, while Kamar Jorden ($5,836) is averaging under 10 yards per catch and has yet to find the end zone. Rookie Jalen Philpot ($2,500) did score his first career major on Saturday but has yet to become a steady presence. If Mitchell can’t get the ball downfield, then fantasy users are going to have a hard time justifying a reason to have a Calgary receiver on the roster.