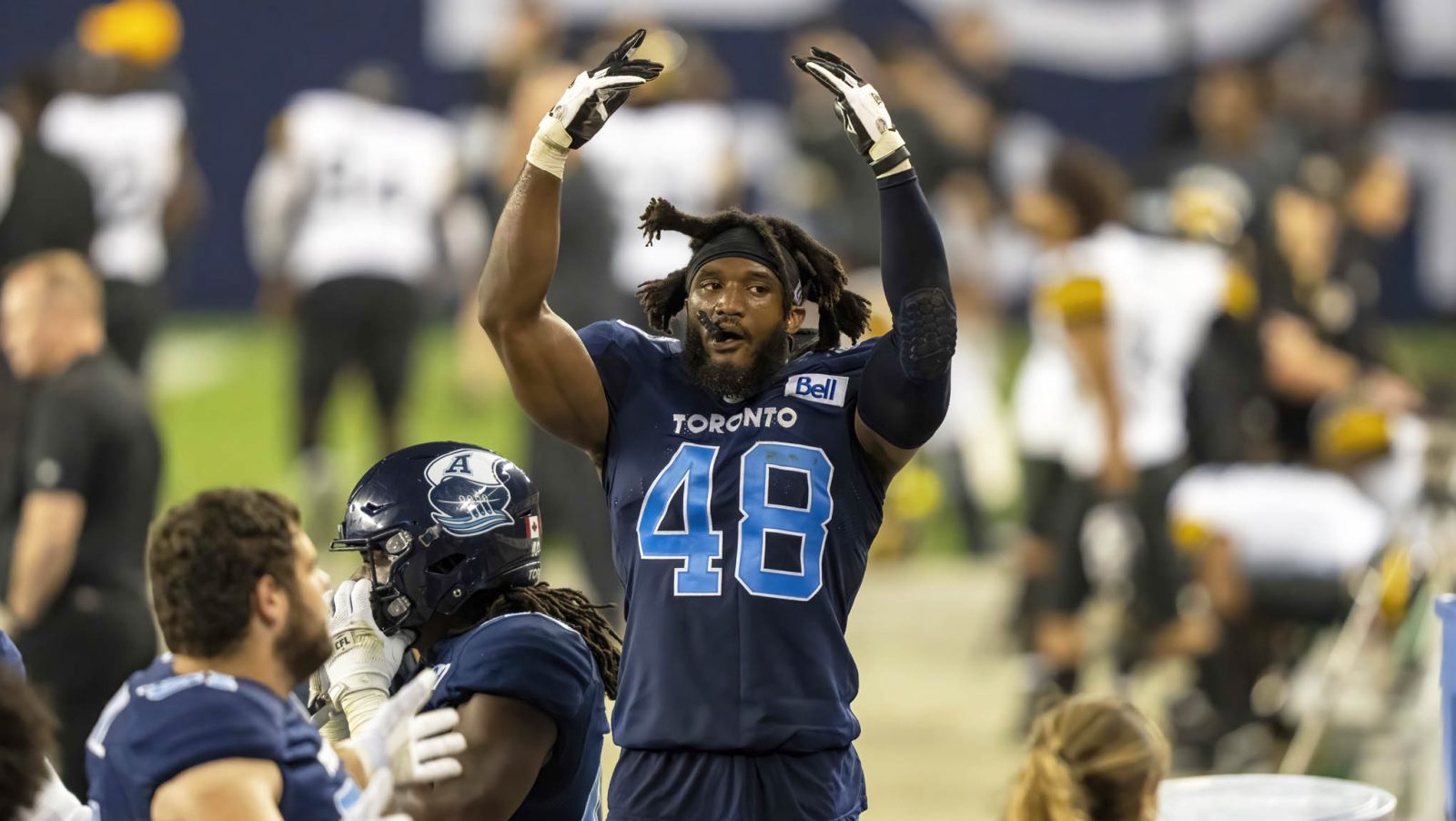 TORONTO — We’ve reached the OK Tire Labour Day Weekend and as we get to the biggest and best atmosphere of regular season games, in some ways it feels like we’re back at square one.

Putting the league-dominating, first-team-ever-to-400-wins Winnipeg Blue Bombers aside, it feels like the reset button has been hit on the notions we had of almost every other team in the league. Injuries, changes at quarterback or just plain inconsistency have thrown a wrench into how we’ve been able to assess the other eight teams on a week-to-week basis to this point.

What that leaves is a lot of room for movement for teams in the coming weeks, anywhere from the No. 2 spot all the way down to No. 9. We’ve seen a little change in this week’s rankings, most notably with the BC Lions, who unsurprisingly missed the MOP-quality presence of Nathan Rourke in their loss to the Saskatchewan Roughriders.

As we hit the most highly anticipated regular season week of the schedule, it feels like almost anything can happen between now and the end of November.

This isn’t news to the Bombers by any means, but last week’s game against Calgary was a reminder for the rest of us that the defending Grey Cup champs have been and will continue to get every team’s best shot, week-in and week-out this year. Incredibly, with the exception of the loss they took at the end of that 10-week marathon they had to start the season, they’ve dealt with it. No team will give a perfect showing every week, but the Bombers continually find ways to dig into that deep chest of theirs to pull out wins. Their spot atop these rankings is more than well earned.

Rare that a team moves up on a loss but there’s something interesting with this and the Stamps’ other three losses this season; they may have played their best football of the season in those three games against Winnipeg and the one against BC. Jake Maier looks very comfortable starting and had instant chemistry with Malik Henry. It’s an unexpected storyline in this season, but it leads the Stamps into their annual Labour Day showdown with the Elks. A pair of wins over their provincial rivals in the next two weeks would help them close in on the Lions in the standings.

This wasn’t the Lions team we’re used to seeing, as the Lions managed a season-low 16 points in their loss to the Riders. Given the injury to Michael O’Connor on Friday, a Lions’ bye comes at the perfect time, not only for their backup QB to heal, but for coach Rick Campbell and his staff to see if there are any other adjustments they can make to get an edge in the coming weeks. Also in need of some mending are DB T.J. Lee, who went down trying to catch Kian Schaffer-Baker‘s touchdown run on Friday night and star receiver/returner Lucky Whitehead. Both are dealing with hamstring issues.

We saw a strong second half and with that the good Argos, the team that’s a turnover creating, offence-cashing-it-in group. When it comes to this Argos’ season, we enter the portion that’s on loop: now we need to see it consistently. Their win was emphatic at home on Friday. On Labour Day Monday, the Argos will get a good measuring stick of where they are this season. A win would give them the season series over the Ticats and would speak volumes about where they might be able to go in their final eight games.

Sticking with teams that are seeking consistency, we land with a Roughriders group that tapped into the potential its shown earlier in the year in its win over the Lions. Cody Fajardo had his first 300-plus-passing yard game since Week 1 and the offence put up a Lions-like 485 yards of total offence. The defence had five knockdowns, but didn’t manage an interception on a night when they hounded Michael O’Connor out of the gate, before he was injured and left the game. One more positive for this team: they took just six penalties for 63 yards. One thing to still work on: the Riders saw Fajardo sacked seven times as they crept back above the .500 mark.

This week’s meeting with the REDBLACKS marks a good test for the Als. They come out of their bye week having generated some good momentum with their win over the Bombers and their last-second victory over Hamilton. This game takes on a different tone after Ottawa’s win over the Elks, where Nick Arbuckle led the team to its second win of the season and rinsing the bad taste of their Week 11 loss to Edmonton out of their mouths. Despite their 4-6 record, the Als are now in second place in the East and have a great opportunity in front of them as they host the REDBLACKS on Friday.

Friday’s loss to the Argos felt like a low point in the season for the defending East Division champions. If what we’ve seen so far this year is any indication though, one poor showing doesn’t have to define what a team will be (see Week 12 REDBLACKS vs. Week 11 REDBLACKS). Much has to change for the Ticats to win games and what they got this past week clearly wasn’t enough. Whoever is at quarterback, depending on the severity of Matthew Shiltz‘s hand injury, will have to take care of the ball and can’t let the deflating events of the third quarter of this past week transpire again. While the Ticats are seeking their first road win of the season (0-6 to this point), they’re 3-2 at Tim Hortons Field. Labour Day could be a game that has a much different feel to it than the one we saw at BMO Field.

It’s been a long six weeks in the Power Rankings cellar for the REDBLACKS and their impressive bounce back win over the Elks warrants a swap-a-roo at the tail end of this list. Whatever else the 2022 season holds for Nick Arbuckle, he has the satisfaction of going into Commonwealth Stadium and handing the Elks a loss after an almost year-long stay with the team that was largely unproductive for him, with much of that out of his hands. Arbuckle was full of optimism in the wake of the win this past week and with a very West-heavy schedule to start the season, they’ll have a shot at making up ground against their Eastern rivals in the coming weeks. That starts Friday in Montreal.

The Elks appeared to have a breakthrough in their Week 11 win on the road in Ottawa. That slipped away from them after the REDBLACKS took a commanding first half lead against them at Commonwealth and didn’t look back. We’ll go back to the theme of this week’s rankings when we say this: it’s been something of a strange season when you’re trying to identify what a team is and where it’s headed. To the Elks’ credit, they’ve continued to fight despite every setback they’ve faced this season. They’ll bring the fight to Calgary for their Labour Day series, but they’ll have to be on point to compete with the Stamps, who took it to them, 49-6, when they met in Week 5.