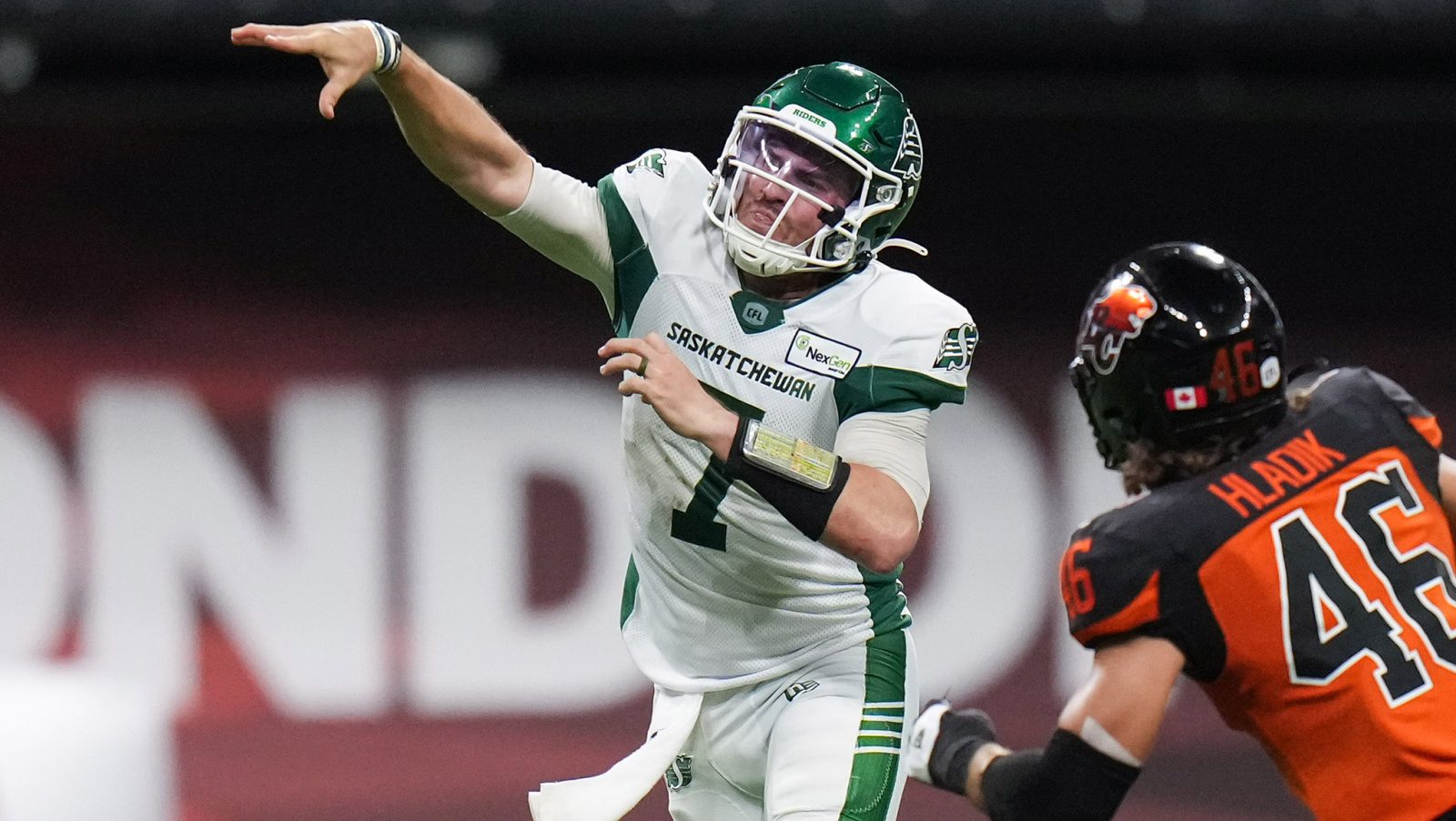 Week 13 is here, which also means OK Tire Labour Day Weekend is almost upon us! It’s the most exciting week on the CFL calendar and, like most years, is chock full of storylines. Here are five to keep an eye on heading into Labour Day Weekend 2022.

I know Calgary ended up losing Thursday, which also meant being swept in their three-game season series with Winnipeg. But the way quarterback Jake Maier played in his first start not related to injury was a massive positive. Despite facing a short week and the league’s most intimidating home crowd, Maier was dialed all night long and had the Stampeders offence looking like a well-oiled machine from his very first series.

Maier finished with 294 yards, three touchdowns, and no interceptions while completing 23 of 28 passes in his first start this season. Calgary moved the ball well against Winnipeg’s vaunted defence and held a 28-24 lead in the fourth quarter as a result. The Stamps have things to lament in not being able to close out the Bombers, but Maier’s performance is not one of them. Dave Dickenson has already confirmed he’ll start Labour Day at home to Edmonton.

A couple sidenotes to Maier’s stellar season debut: the play of Ka’Deem Carey and Malik Henry. Carey looked strong in his return after missing almost a month with injury and finished with 62 rushing yards on 11 carries. Henry, on the other hand, was like a turbo button for the Calgary offence. In his first game since Week 9, Henry caught seven passes for 122 yards and three (!) touchdowns and looked very much like the guy who jumped off the page early in the season.

Trending in the right direction

Labour Day Weekend kicks off in Montreal when the Alouettes host Ottawa on Friday night. It’s a chance for Montreal to continue their roll; they’re coming out of a bye on a two-game win streak thanks to impressive wins over Winnipeg and Hamilton. New head coach Danny Maciocia has the Als playing their best football of the season and, as we talked about last week, potentially in the driver’s seat to take top seed in the East Division.

Part of that is the fact they play Ottawa three times down the stretch, including this Friday. But as Edmonton just found out over the weekend, the REDBLACKS still have lots of fight left in them despite their record. Nick Arbuckle moved the ball well in his first start with Ottawa and was the driving force behind a 20-3 halftime lead, which was converted into a 25-18 win. It was a step forward for the REDBLACKS going into a tougher matchup against Montreal.

Winnipeg’s 31-29 win over the Stampeders on Thursday was a return to form in many ways. After sustaining their first loss of the season in Week 10, the Bombers went into their first bye with a sour taste in their mouth. To win the way they did against a quality opponent had to have felt nice.

Winnipeg showed many of the characteristics against the Stampeders that propelled them to wins in their first nine games. They were dangerous and efficient offensively and, most importantly, were at their best in all facets when it matters the most: the fourth quarter. The Blue Bombers have shown time and time again this season how good they are when games are on the line, which is something they might need again Sunday on the road in Regina.

Cody Fajardo is back

The Roughriders are going to be feeling pretty good about themselves as they host Winnipeg for their annual Labour Day Weekend showdown, and rightfully so. Saskatchewan looked strong in their 23-16 win over BC on Friday to get back above .500 and move within a half game of Calgary for third in the West. Just as important was the performance of their quarterback.

Much maligned of late, especially coming off last week’s loss to the Lions, Cody Fajardo silenced a few critics with Friday’s performance. He was accurate in completing almost 80% of his passes, stretched the field with an 85-yard touchdown throw to Kian Schaffer-Baker in the second quarter, and finished with his best stat line of the season: 321 yards, two touchdowns, and no interceptions. BC is a strong opponent, but Winnipeg is at another level, which means Fajardo will likely have to make it two straight games like that for Sask to pull off the upset.

Labour Day will see the final meeting, at least this regular season, between Hamilton and Toronto. In a stretch of four matchups in five weeks, the Argos are in position to win the head-to-head series thanks to a 37-20 win on Friday. It was a fun night for plenty of players in double blue: McLeod Bethel-Thompson looked strong throwing three touchdown passes, Jamal Peters hit the trifecta with three interceptions including a house call, and Wynton McManis racked up 11 defensive tackles.

With no disrespect to East Division leading Toronto, though, Monday’s game between these two is all about what we see from the Tiger-Cats. There are so many questions surrounding Hamilton coming out of another tough loss, and another tough fourth quarter, with the status at quarterback leading the way. Dane Evans struggled over the weekend and was replaced by Matthew Shiltz, who then had to exit the game with an injury. It’s one of the big storylines to watch across the league heading into Week 13.

There’s always a buzz when these two meet on Labour Day. But with Ticats fans growing restless, and with the game being played at Tim Hortons Field, I can’t wait to see how the latest Battle of Ontario installment plays out.