OK Tire Labour Day Weekend highlights Week 13 of the CFL season, and should give fantasy users a renewed sense of hope on a number of players who either returned to action or offered redemption after a solid Week 12 performance.

This week’s edition of Start vs. Sit will highlight a fresh face or two along with pointing out which players are entering matchups that will surely hinder your lineup. 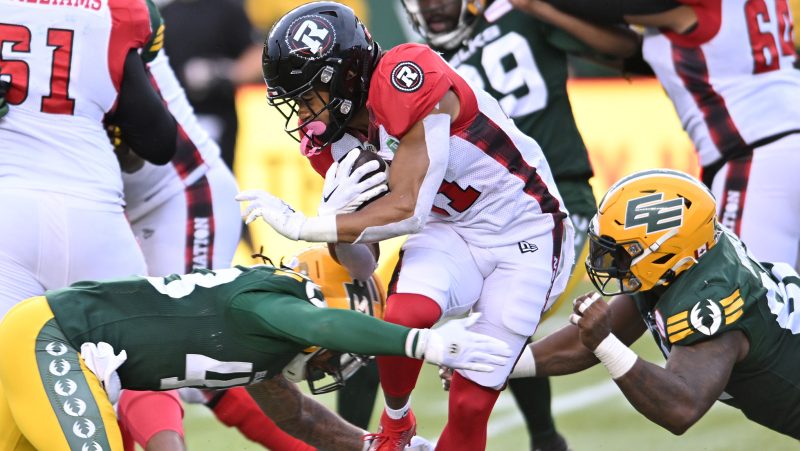 In his last two games against the Edmonton Elks, Ottawa running back Devonte Williams carried the ball 19 times for 78 yards, adding another 28 yards receiving (The Canadian Press).

Devonte Williams has taken the bulk of Ottawa’s carries since William Powell was placed on the six-game injured list, and comes off a Week 12 performance which saw him rush for 58 yards on 12 carries. A potential breakout awaits Williams as he faces a Montreal run defence that is eighth in the league with 108.7 yards allowed per game.

The presence of Nick Arbuckle ($6,286) at pivot compared to Caleb Evans ($8,428) means Williams should be able to approach 15-18 carries. The Alouettes allowed 5.3 yards per tote and have surrendered 10 rushing touchdowns, factors that set Williams up for being a strong value play.

He has caught at least three passes in each of his starts, bringing added touches to further validate starting Williams. About the only negative is that Evans will likely get the majority of carries near the goal line, yet this shouldn’t deter Williams users from investing in a nice payoff.

Tell us you’re foolish without telling us you’re foolish. The Elks punted the ball in the direction of DeVonte Dedmon, who on his very first return since coming back to the league, broke away for 42 yards.

Edmonton wouldn’t make the same mistake again, as Dedmon had just two more returns for a combined 28 yards. The Elks would intentionally kick short in order to avoid the league’s most dangerous return specialist. One would assure the Alouettes received the memo despite allowing a CFL-low one big-play return, yet stranger things have happened. Ottawa did try to get Dedmon involved in the offence, but if he’s not involved in the return game, then he’s of little fantasy value. 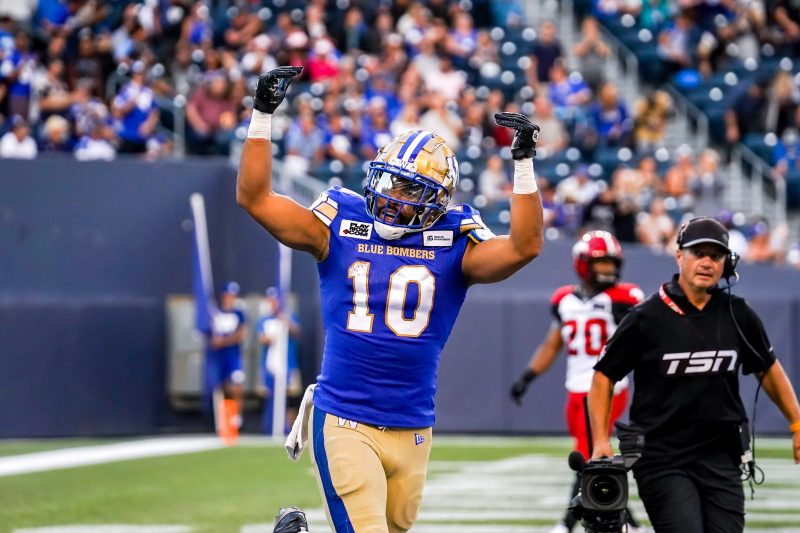 Winnipeg Blue Bombers receiver Nic Demski has scored three touchdowns this season, all of them coming against the Calgary Stampeders (BlueBombers.com).

Nic Demski put up 29.3 fantasy points in last Thursday’s win over Calgary, catching eight of nine passes for 117 yards and rushing for an additional 36 yards on three carries. Dalton Schoen ($6,220) is still a rookie, after all, and with Greg Ellingson ($8,493) sidelined with an injury, the time has come for Demski to show why he’s one of the most versatile offensive weapons in the league.

Winnipeg’s passing game was becoming too reliant on Schoen, so the extensive usage of Demski is welcomed. Saskatchewan is eighth in passing yards allowed and have allowed 18 completions of better than 30 yards. Look for the Blue Bombers to find ways to get Demski into the open field where he can utilize his quickness.

Cody Fajardo comes off a season-best 324 yards in the Week 12 win over the BC Lions, putting up 24.1 fantasy points, his second-best total of the year. The good news keeps coming as the Riders are expected to have Brayden Lenius ($3,484) back in the fold after he returned from his time with the Atlanta Falcons, and Shaq Evans ($5,575) has been working his way back into practice with the team.

So, why should you avoid Fajardo? Past history tells us he will struggle against the Blue Bombers. In three games against Winnipeg in 2021, Fajardo threw just one major against four interceptions in 83 combined attempts.

Winnipeg is one of two teams (BC) that has yet to allow more than nine passing touchdowns this season while holding opponents to a league-low 63.3 per cent completion rate.

If it’s not broke… Tim White rewarded his fantasy users a third straight week, putting up a combined 21.7 fantasy points despite not finding the end zone. White had his third 100-game game of the season and has caught 19 passes for 327 yards and three majors since the Tiger-Cats lost Bralon Addison for the season.

Hamilton pivots have targeted White 32 times over the past three games and there’s little reason to think that he won’t see at least 10 targets on Labour Day.

The Argonauts are eighth in opponents’ completion percentage, and with Papi White ($3,502) back in the lineup alonside Lemar Durant ($4,152) who caught his first touchdown as a Ticat last week, shifting the defensive focus on Tim White could have negative consequences.

Toronto averages fewer than 80 yards per game and have seemingly treated running the ball as an afterthought since losing Andrew Harris for the season. A.J. Ouellette ($4,216) averages just 4.1 yards per carry and is more valuable as a receiver than runner, while Javon Leake ($3,500) has all of six carries while being used more in the return game.

At some point, one has to wonder when rookie Daniel Adeboboye ($3,500) becomes a factor. Adeboboye has just four touches this season and has not seen the field since Harris went down. Sooner or later, Toronto is going to need to run the ball with some sort of consistency in order to take pressure off the passing game, and there’s the sense the difference-maker in the Argos backfield has yet to arrive in Toronto.

Jake Maier made being a Stampeders receiver cool again in last week’s loss to the Blue Bombers. The second-year pivot averaged 10.5 yards per pass, the first time since Week 5 a Calgary pivot was able to achieve averaging double digits per attempt. He came within six yards of becoming the first quarterback in league history to throw for 300 yards in each of his first four starts, but fantasy users weren’t complaining about the 23.8 fantasy points that Maier generated.

A bigger game awaits Maier as he takes on an Edmonton defence that has given up a league-high 18 passing touchdowns along with a 114.6 passing efficiency for opposing quarterbacks. Having a healthy Ka’Deem Carey ($8,471) should open up the passing game, providing opportunity for fantasy users to stack Maier and Malik Henry ($8,094) or Shawn Bane ($3,290) which after last week’s showing could reap potential rewards for lineups.

Despite rushing for a pair of touchdowns, Cornelius faltered in Saturday’s loss to Edmonton by completing just 14 of his 37 attempts. While he did throw for 287 yards, keep in mind 146 of those came from highlight-reel efforts from Kenny Lawler ($9,383). To show just how disjointed Cornelius’ performance was, running back Ante Milanovic-Litre ($2,766) led the team with 10 targets.

Calgary allows nearly 300 passing yards per game and while there’s no question Cornelius can make a deep shot or two, fantasy users aren’t willing to gamble that he’ll approach a 50% completion rate, let alone holding hope that he can produce a major or two.