The best part of Labour Day Weekend is the complete theatre it can create. There have been classic comebacks, blow outs, upsets, legends being made and even the occasional brawl.

The worst part of Labour Day Weekend is the complete randomness of some of the results. In rivalry games, like we have this weekend, the energy each stadium brings has the air of a playoff game.

Over the last 10 seasons, no matter the records, the home teams of the three Sunday/Monday rivalry games have a combined record of 23-5 (the Argos and Ticats didn’t play each other on Labour Day in 2011 and 2013).

So, yes, the edge is clearly on the home side. Keep in mind when making your picks. 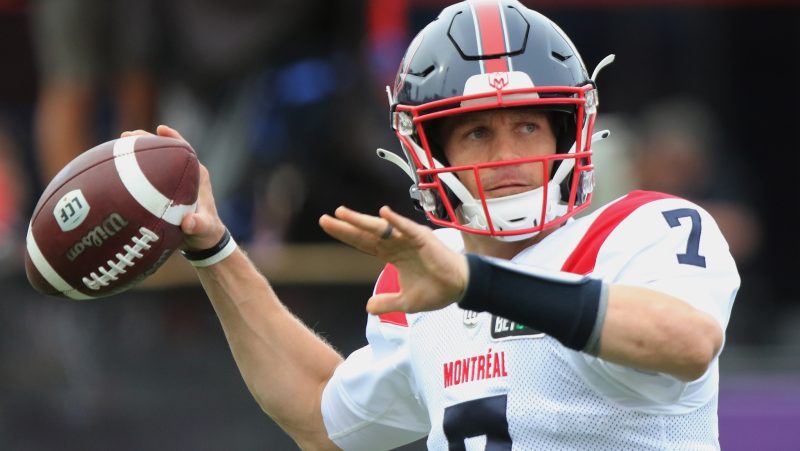 Trevor Harris and co. will be looking for a victory on Friday Night Football against the Ottawa REDBLACKS (Dave Chidley/CFL.ca)

What a huge win for the REDBLACKS in Edmonton to keep their playoff hopes alive. They can make a major improvement on those odds if they can pull off another road victory.

Nick Arbuckle was efficient and more importantly protected the football. For a team desperate for consistency at quarterback and not putting their defence in difficult positions, it was a welcome sight to see.

The last time these two teams met the REDBLACKS had the chance to tie the game late in the game and Darvin Adams had the game in his hands but dropped it. And that’s how close I think these two teams are.

The Alouettes come out of their second bye week, this time without a coaching change. Montreal is coming off back-to-back dramatic endings in which they came out victorious. I believe that can only galvanize a team. They’ve also played well for seven of eight quarters against the best team in the CFL, including the win in Winnipeg.

I’ve got to believe the Alouettes will carry the momentum through with a win on Friday night. 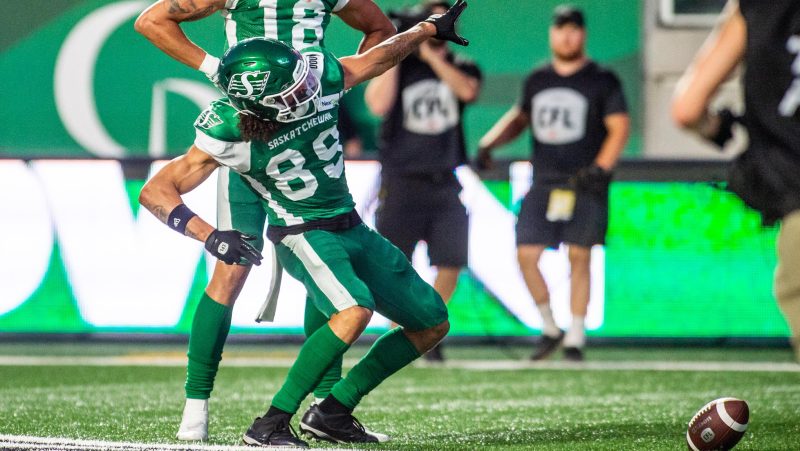 The Riders will hope to get the best of the Bombers this weekend (Matt Smith/CFL.ca)

Did the Roughriders send a message to Cody Fajardo two weeks ago? Yes. Did he get the message? Absolutely. For the first time in 10 weeks Fajardo was calling his own number more regularly and using his legs to extend plays to find open receivers down field.

Fajardo said if he was going down, he wasn’t going to leave anything off the field. It’s the fight or flight mentality and Fajardo showed a lot of fight in BC.

Now he has an even tougher test with a Winnipeg team that finds a new way to win every week on tap. The Bombers have taken on all comers at the top of the CFL’s West Division with a 4-0 record against Calgary and BC.

It’s easy to see those two teams are stronger than Saskatchewan, especially along the offensive line. The Bombers have that matchup easily in their favour with a vaunted defensive line.

I’m not sure why I’m going this way. But because I can’t shake the image of a 1-7 Riders team or an 0-9 Riders team winning on Labour Day, I do believe the Riders ‘revenge season’ mentality will come to play this week. They’re sick of losing to the Bombers. The hate runs deep.

The Riders defensive line will get to Collaros. And I’ll probably be eating crow this time next week. 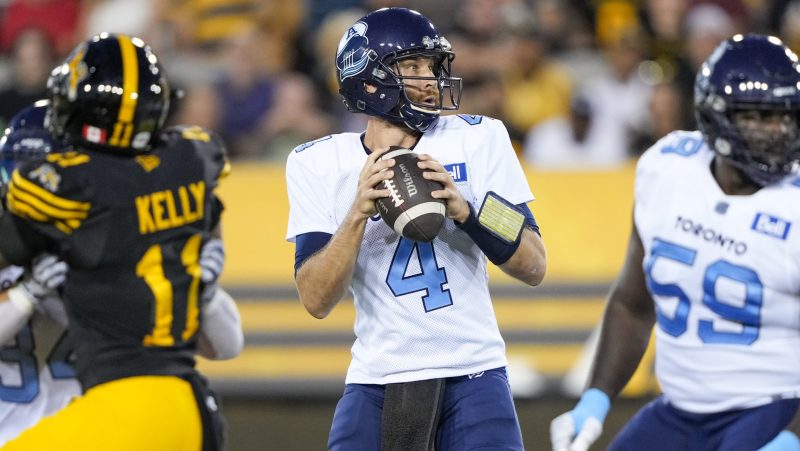 McLeod Bethel-Thompson will hope to make it two-in-a-row against the Ticats as the teams meet for their fourth and final time this regular season (Kevin Sousa/CFL.ca)

Every year there is a team I just don’t have a great feel on and that team this year is the Hamilton Tiger-Cats. I just can’t figure out where they’re going and who they are.

I know their 3-8 record should probably clue me in but I’m thrown off by the amount of talent they have. However, sometimes it all comes down to quarterback. Dane Evans‘ drop off in play this year has been dramatic as his turnovers continue to pile up and the doubt does as well.

The Tiger-Cats have more quarterback decisions to make going forward and if Matthew Shiltz’s injury is as bad as it appeared on his throwing hand, Hamilton is going to have to hope Evans can become the quarterback they thought they were picking when they chose him over Jeremiah Masoli to be the future QB.

Toronto, meanwhile, is fired up to take over the East Division. That defence flies around and I think they’re an underrated group. Last week, they took advantage of everything that came their way.

The reason Toronto is a fiery group is due to their quarterback, McLeod Bethel-Thompson. He’s an uber competitor and we’ve seen it in good times and in bad for the Argos this season. My biggest concern with the Argos right now is the run game. They’re getting no push and without Andrew Harris, they can’t afford to become one dimensional. The opposition will start to feast on second and long.

If Shiltz was behind centre, this would be a different pick this week. 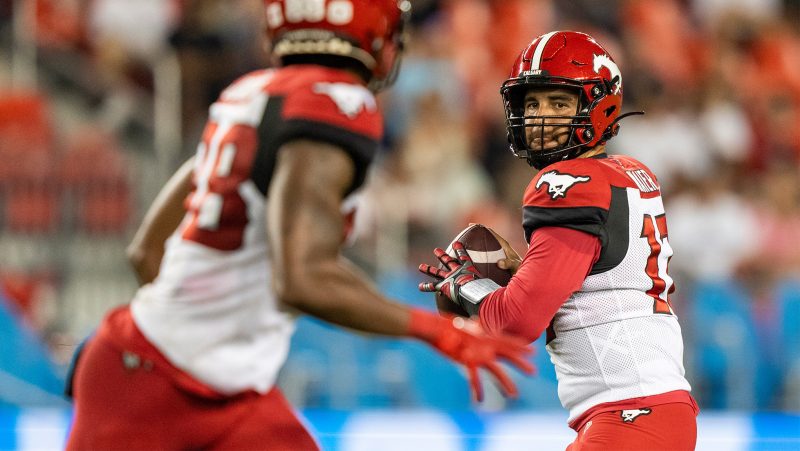 Jake Maier will start for the Stampeders on Monday as they host the Edmonton Elks (Kevin Sousa/CFL.ca)

Dave Dickenson made a tough decision and Jake Maier didn’t disappoint his head coach, even though they did end up losing to Winnipeg. But Maier allowed the Stampeders offence to be much more productive against a Bombers team that swallowed up Bo Levi Mitchell as he threw for one touchdown pass and 400 yards in two games against Winnipeg.

Maier threw for 294 and three touchdowns in one game.

Maier is the guy moving forward until he has a major setback. The Stampeders under John Hufnagel have made a series of hard decisions at quarterback but they know when the next guy is ready, give him the ball and let him run with it.

The Elks, meanwhile, are coming off possibly their most disappointing home effort in over 1,000 days. A loss to the one win Ottawa REDBLACKS and right when you thought Chris Jones and crew were getting it together, they laid an egg.

Now they have to go into hostile territory with a confident new hot shot quarterback. Yeah, I don’t think I need to say much more than that before making the obvious call.