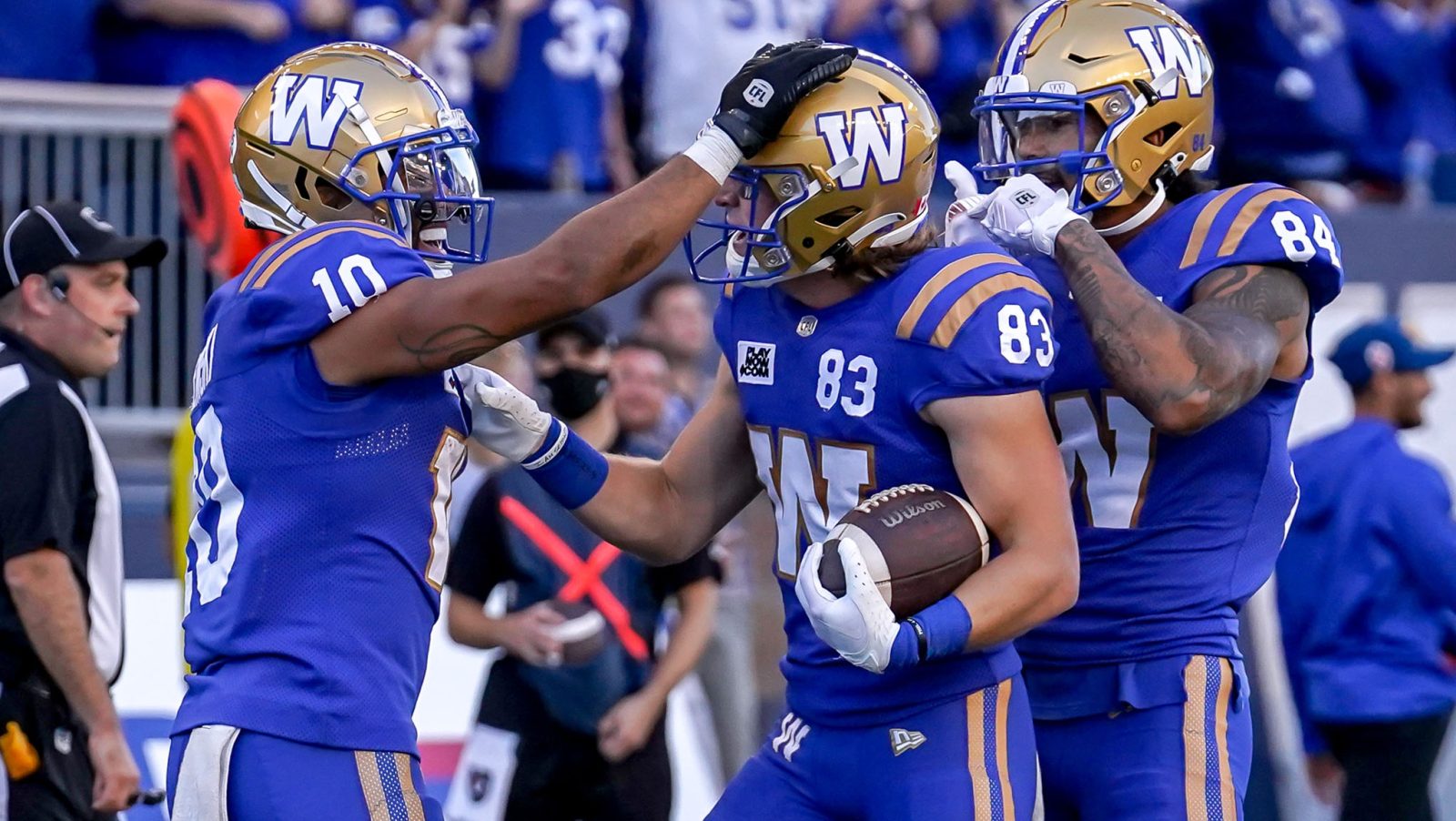 Hello, Edmonton Elks fans. It’s always darkest before the dawn. Believe it. That dawn is coming.

I was a young reporter, in Ottawa, covering my first CFL season, back in 1988. The Rough Riders would set the record for most consecutive home losses that season (which you have now tied), when the Toronto Argonauts beat them by a score of 52-3, on October 8. We all felt there was no end in sight. Two weeks later (and after being beaten in Toronto by a
score of 49-7), at their next home game, the Rough Riders upended the visiting Calgary Stampeders, 19-3.

I remember it well because that was the first time a CFL coach swore at me and kicked me out of his team’s locker room, as Calgary’s Lary Kuharich did. Actually, that’s the only time a CFL coach swore at me or kicked me out of a locker room. So far. At any rate, this young reporter got an object lesson in just how personally a loss can be taken in pro football. Well, would ya look at that! I just provided you with a 34-year-old bonus takeaway.

Here are some not nearly as old takeaways, from Week 14.

The BC Lions spent the first half of their season being the windshield but their last two outings have had them getting smooshed rather than doing the smooshing.

The reason for that is plain to see and so is the answer. However, what remains to be seen is whether the answer will be enough to get them back to their winning ways.

You’d have to expect Vernon Adams Jr. (or Michael O’Connor if he’s healthy) is about to be asked to work some magic at the controls – never mind that, with weapons like that all around, the Lions’ offence doesn’t need magic from the quarterback, just methodical success – and time is of the essence as second place is on the line with season defining back-to-back games coming up against the Calgary Stampeders.

BONUS TAKEAWAY: Friday night’s loss in Montreal wasn’t ALL on the Lions’ stalled offence, no siree. Huzzah to the Alouettes’ defence which had a hard-hitting, take-that-thing-away groove going all night long. If that is their standard for the rest of the season, top spot in the East remains a contentious issue.

THAT’S SOME PRETTY GOOD SECRET AUXILIARY POWER YA GOT THERE.

Well, it’s not secret anymore. Hats off to another East defence, the one in double blue. Toronto’s D found some kind of miraculous extra energy source on Saturday, despite being asked to spend almost the entire fourth quarter (11 and a half minutes by my math) on the field against Ottawa. And while being down a couple of key starters in Shane Ray and
Henoc Muamba.

Everybody on that defence looked like they were pretty well beyond running on fumes in the heat and humidity of the afternoon as the REDBLACKS started to march, seemingly at will. But, twice, the Toronto defence found a hit of just enough caffeine to snuff out what would have been game-winning drives, deep in their own territory.

No one on the Argos’ D should have had to carry any of their bags after that game. And they should all get to watch the team’s next practice from sideline hammocks while being served electrolyte-spiked tropical drinks, complete with little paper umbrellas in them.

BONUS TAKEAWAY: A.J. Ouellette looks like the guy you absolutely want by your side as you fight against the zombies who have you cornered in an abandoned amusement park.

TOUGH ENOUGH TO BEAT ONE FORMIDABLE OPPONENT. BUT TWO?

The hat I took off to salute the Argos’ defence goes right back on my head so I can immediately take it off once again to honour the Saskatchewan Roughriders.

I don’t know if you’ve ever had the kind of 24-hour flu that can utterly destroy your insides (and your soul) before, but I have. Twice. And I could barely muster the will to crawl back to the bedroom after yet another trip to the bathroom, never mind playing football. And never mind taking on the machine known as the Winnipeg Blue Bombers.

“That group in there gutted it out,” said Saskatchewan Head Coach Craig Dickenson, motioning towards the Roughriders’ locker room. “That was a depleted group in there. The ones that were playing, half of them were sick. I’m proud of them.”

Dickenson reported that up to 15 of his players suffered the onslaught of the continually blitzing bug, as well as “seven or eight coaches,” including himself.

It is tough enough to beat Winnipeg as it is. But when the flu plays its way onto your active roster? No amount of chicken soup in the world could help you, even if you could keep it down.

BONUS TAKEAWAY: The first time I had such a flu? Arriving home after yet another Rough Rider loss, back in 1988. And that’s true. Not a great year.

BONUS BONUS TAKEAWAY: Actually, that year ended up great. I covered my first ever Grey Cup that season, on a beautiful, unseasonably warm day in Ottawa. The day before, I learned what a swell guy Winnipeg coach Mike Riley was, when he agreed to meet me for an interview in the lobby of the Chateau Laurier, after I called and apologized for missing his media conference that morning due to a scheduling mix-up. Kind of a counter-balance to getting kicked out of the Calgary locker room, I guess.

GOOD THINGS HAPPEN WHEN YOU’RE ON THE ONE

There is a little more to it than that, of course and Calgary starting quarterback Jake Maier knows it, having handled short-yardage last season. “It is a war in there,” said Maier. “I don’t think people quite understand what that environment is like.”

At six-foot-five and 245 pounds, Stevens seems well-suited to the maelstrom of goal line plunging, fraught with danger (and hurtling bodies) as it is. “That’s a load, man,” said a grinning Maier, happy for his teammate’s success. And perhaps just happy that he isn’t the one having to run straight into the angry, roiling sea anymore.

Stevens seems to relish it, though, and was looking for more action on running back Ka’Deem Carey’s late touchdown rush, when the QB sprinted down the field to throw a block on the play. He missed that block and seemed genuinely disappointed he did not get a chance to take on Edmonton defensive back Duron Carter, who took evasive action with a last-second spin, avoiding what would likely have been quite the mood-altering collision.

“I wanted to actually hit him,” said Stevens. “That’s my favourite play of the night.”

Good things happen on the one. Especially when you relish the role and are built for it.

DON’T GET INTO A STARING CONTEST WITH DALTON SCHOEN

What’s been impressive about Winnipeg rookie receiver Dalton Schoen this year? All of it. All of his Schoen-ness has been impressive. The catches, the yards, the touchdowns. Just splendid. In Saturday’s win over Saskatchewan, Schoen grabbed four more balls for 63 yards including his 10th touchdown reception of the year. Added three more second-down conversion catches to bring his league-leading total to 28 on the season.

Immeasurable powers of concentration too? On one of his four receptions, Schoen was absolutely filled in by Saskatchewan defender Mike Edem, a well-known, highly-professional separator of ball and man who hit Schoen harder than that flu hit the Roughriders. Edem’s contact did, in fact, separate Schoen from the ball. On his way down, though, Schoen reached out and plucked that ball out of mid-air, just above the turf. It didn’t merely fall into his hands or his lap. Schoen saw, reacted, reached and secured.

That is some kind of focus.

I imagine that Dalton Schoen stands in front of the uprights before every game and every practice, staring at them and trying to bend them with only his mind, just for fun. Wouldn’t be surprised if he was able to do it, too.

AND FINALLY… If Rasheed Bailey keeps that up we’ll no longer call him Rasheed nor will we call him Bailey. We’ll just refer to him as Flight 88.