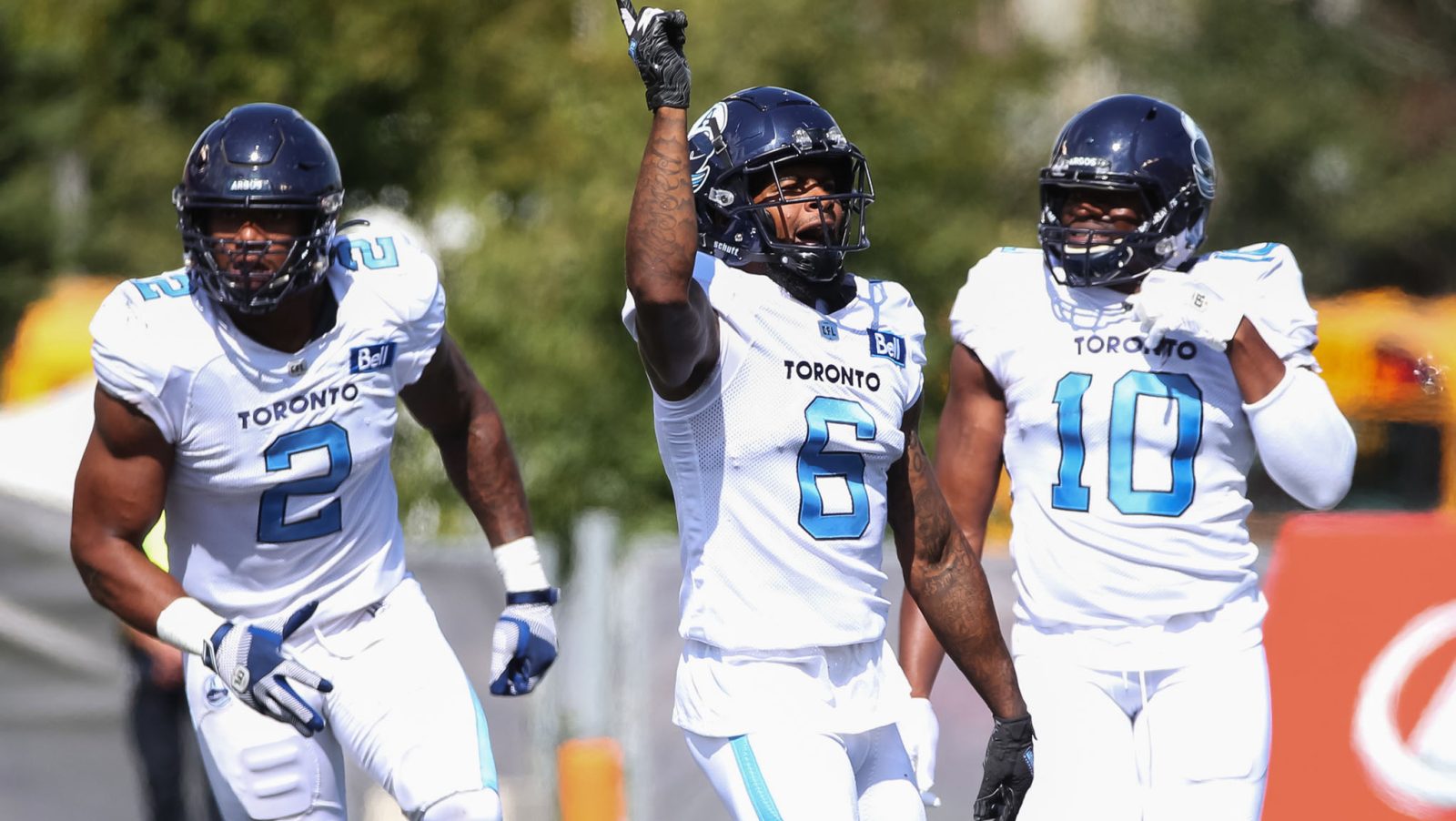 We hear all the time how “the season starts after Labour Day.” We also talk about how important it is in this league to be peaking at the right time heading towards the playoffs. Well, here we are after Labour Day, and two teams look like they’re really starting to figure things out in the second half of the season.

Let’s start with Toronto. After their 24-19 win over Ottawa on Saturday, the Argos have won three straight and have solidified themselves as the East Division’s pacesetter. After a blip that saw them drop three of four, Toronto has settled in and have started to forge an identity as a well-rounded football team.

We’re talking about a defensive unit allowing just over 21 points per game, which is good for third overall. Even more impressively, Toronto has only surrendered 19 offensive touchdowns through 12 games; only Winnipeg has a better total at 18.

On offence, Toronto passes the ball a lot. Quarterback McLeod Bethel-Thompson leads the CFL in attempts (415), completions (281), and yards (3,427). And with that group of receivers you can see why. The Argos can have any one of Kurleigh Gittens Jr., DaVaris Daniels, Brandon Banks, or Markeith Ambles go off for a huge game. Saturday just happened to be Gittens’ turn, as he went for 161 yards and a touchdown.

Then there’s Calgary. You can make it wins in three of four for the Stamps after their 56-28 win over Edmonton in the Labour Day rematch. Their one loss in that stretch came to Winnipeg in a game that came right down to the wire.

Much of the attention in Calgary right now is focused on quarterback, and rightfully so. Jake Maier is now 2-1 as a starter and has looked strong for the vast majority of those three outings. Saturday saw him throw for 278 yards and a touchdown on a night where the Stampeders offence was ready to go from the opening kickoff.

Since Maier has taken over, receiver Reggie Begelton has had three of his best games this season, including 112 yards over the weekend. Positively, Begelton’s gaining momentum hasn’t slowed breakout superstar Malik Henry. In Maier’s three starts, Henry has popped off for 287 yards and four touchdown catches. Oh, and running back Ka’Deem Carey is back on top of the league with 712 rushing yards and seven rushing touchdowns.

And yet, for all the focus on Calgary’s offensive exploits, that defensive unit is making plays, too. The Stamps lead the league with 34 forced turnovers, good for a +16 turnover ratio, also best in the league. Calgary has been bruised and battered on defence all season, especially in the backfield, but this group is coming into their own down the stretch.

Both the Stamps and Argos are headed to the playoffs. Now it’s all about how much momentum they can continue to build and potentially carryover into the postseason. Toronto has a Week 15 bye while Calgary is at home for a huge showdown with the BC Lions.

The time is now

The Week 15 schedule kicks off Friday in Regina when the Riders host Edmonton in a huge game for both teams. After getting swept in Labour Day sets vs. their archrivals, both the Riders and Elks are licking their wounds. And both are facing a little more urgency as we enter the stretch drive.

While Saskatchewan is in decent position to qualify for an East Division crossover spot, that’s not what they were striving for entering the year. The Roughriders had their sights on hosting a playoff game for a third straight season. If they want to have any shot at that, they can’t drop a home field game against the team sitting fifth in the West.

Saskatchewan still has a chance to make a move up the standings. The Lions are trying to find their way without Nathan Rourke and thus seem more vulnerable than they did a few weeks ago. The Riders also have two head-to-head matchups with Calgary to close out the season; if they can put together a couple wins, those games could still end up being meaningful.

But don’t sleep on Edmonton. They know if they have any shot of entering the crossover conversation, this final game against Saskatchewan is crucial. Even if it’s an outside shot, the Elks will still have one if they can pull off the upset on the road. A loss will effectively put the playoff conversation to bed, which means Friday night has to be must-win territory for the Elks.

Time is also running out in Hamilton, which is why this week needs to be approached in a similar fashion. With Montreal holding down second in the East Division and on a Week 15 bye, the Tiger-Cats have the chance to close the gap. Hamilton then visits the Alouettes the following week, which would be a whole lot more interesting with only one win separating the two teams.

Of course, the task is anything but easy for the Ticats. Facing last call on their season, Hamilton hosts 12-1 Winnipeg on Saturday afternoon. It’s a daunting task to keep the playoff dream alive, but that’s the situation Hamilton has put themselves in. Let’s see how they respond in a Grey Cup rematch that looks a whole lot different than we thought it might.